Andy Greenwald: I am not blessed with the sight. When it comes to predicting the future, I have a lot more in common with Jon Snow than with Bran. Which is to say: I know nothing. But indulge me for a moment, if you will, as I precap today not with the usual air of giddy expectation but with a rare dash of concern.

Something’s been building on the margins of Game of Thrones, something massive and unforgiving, the thought of which sends a chill down the back of a considerable percentage of its fans. No, not winter: magic. As the show lopes slowly, like an exhausted direwolf, toward its eventual conclusion, it’s becoming more and more apparent that the only thing that could possibly unite the many, disparate story threads is the supernatural. Don’t get me wrong: I understand that spooky doings have been part of Thrones from the very beginning. The first scene in the pilot didn’t involve twincest or Ned Stark solemnly stroking his morals. It focused on a ranging party north of the Wall who encounter a gang of White Walkers. (Reminder: It does not go well!)

But until now it’s been wonderful to see magical doings — be they Daenerys’s dragons or Melisandre’s secondhand smoke — greeted with as much skepticism as fear. Through three and a half seasons, magic on Game of Thrones has been the shark fin in the water, the shadow outside the shower curtain. It’s been scary — and resonant — because of what remains unseen. Instead of flooding us with immortal elves and unexplainable sorcery, George R.R. Martin devoted the bulk of his story to the equally implausible and horrific actions of those two-legged monsters known as human beings. Everything we’ve witnessed thus far — ranging from the “awful” to the “shockingly awful” — can be ascribed to resolutely earthbound things like envy, lust, and ego. Who needs orcs when you have the Lannisters?

Recently, though, Game of Thrones’ vicious life lessons have begun to circle the drain. While never heroic (and that certainly was the point), the internecine struggles of Game of Thrones’ characters appear increasingly brutal and pointless. Rapists are stabbed through the mouth; rape victims are left out in the cold. This weekend’s episode promises a trial in which a father will decide the fate of a son accused of poisoning his nephew. The Boltons, with their proclivity for backstabbing and front-flaying, seem less like outliers and more like harbingers of the new normal. Besides,  what value is the Iron Throne if the Iron Bank forecloses on it?

What concerns me is that the only potential counter to Nero’s noisy fiddling involves a heavy dose of the very things Martin once appeared to be taking a stand against. Bran Stark has gradually transformed from storytelling afterthought to dramatic linchpin with an adventure filled with mystical trees, mutant birds, and the kind of remote-control telepathy not usually seen outside of X-Men comics. The only thing that might stop the incestuous scheming in King’s Landing is an attack of CGI from the North. Will Game of Thrones’ rising tide of coke-nailed ice zombies and petulant fire gods supersede the emotional trench warfare that attracted so many of us in the first place?

I hope not. In both stories and storytelling, magic can offer an escape from the sort of hard choices that make life both fascinating and grueling. As the battle lines are drawn for the second half of the series, I’m not asking for heroes. I’m just cautioning against superheroes. Call me old-fashioned, but I’d love to see Jon Snow or Daenerys consolidate power through hard work, decency, and the sort of moral flexibility necessary in a bendy moral universe. From what we’ve been told, dragonfire has a knack for burning everything in its path. I have to assume this includes nuance. 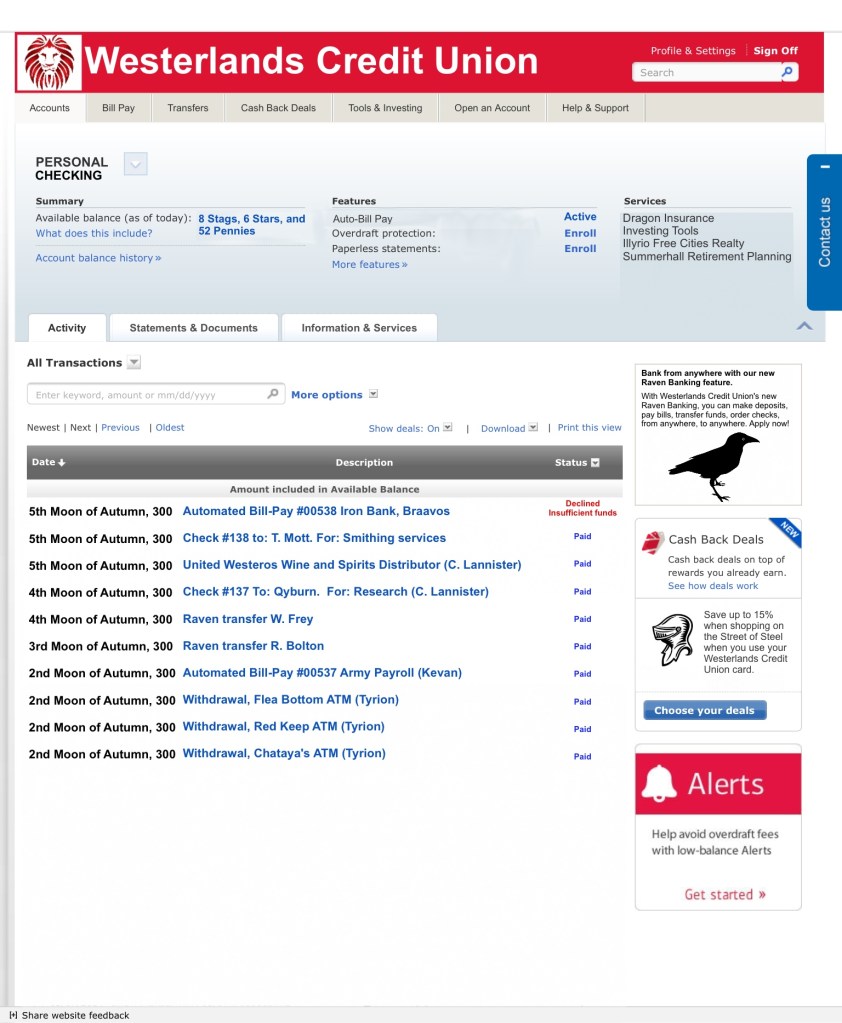 Let’s see: Lysa killed her lord husband, the hand of the king; conspired to kill Joffrey, the actual king; and surely killed the last shred of Sansa’s innocence with her deafening lovemaking. Of course, that’s all as harmless as a glass bird floating through a moon door compared to Lysa’s truly batshit acts, like breastfeeding a son who’s old enough to have a fiancée. Speaking of betrothals: Nothing shed a loony-bin-bright light on Lysa’s fragile mental state quite like the revelation that she’s genuinely hot and heavy for Littlefinger’s littlefinger. In true Westerosi bridezilla fashion, she wouldn’t even delay the wedding long enough to let Lord Baelish bathe. No surprise, she likes it dirty. They say the Eyrie is impregnable; let’s hope Lysa is, too.

His idea of a cookout is to castrate a prisoner, then make said prisoner watch as he dangles and eats a pork sausage. His idea of a leisurely stroll is to sic wild dogs on an underperforming employee and then watch as they eat her. His idea of father-son bonding time is to convince pops to allow him to take his brainwashed “creature” along for a mass-murder mission, and then grin from ear to goofy ear as he basks in the warm glow of that hard-earned paternal affection. In short, Ramsay is a sick fuck, and the sooner he takes a flaying knife to the eye, the better.

It’s somewhat comforting to know that every society, whether real or fictional, has its religious loons. It’s infinitely less comforting to know that this particular crimson-clad crazy is capable of pushing smoke assassins out of her hoo-ha. Melisandre is one of the more focused, committed, and magnetic characters on the show, but if you fall under her spell for even a second, she’ll stick leeches on your one-true-god or burn you alive. There’s power in kings’ blood, and plenty of loose marbles in Melisandre’s mind.

We don’t know much about Stannis’s wife, but we do know that she keeps her stillborn sons lined up in jars like so many shame trophies, and that’s enough. While Mrs. B. has given her formaldehyde-floating progeny prime real estate in her Dragonstone lair, she’s shuttered away her one living (only slightly disfigured!) child, delightful Westerosi Reading Rainbow host Shireen. At least Selyse takes pride in fluffing for Stannis and Melisandre. Do you, Selyse. Do you.

Jojen is nothing like a typical teenage boy. He’s not interested in food or fucking or fighting. He needs his sister to protect him. He spends most of his time making bold proclamations about destiny and trees and three-eyed ravens. Then again, he’s at least somewhat like a typical teenager, because he is clearly very high. Sure, Jojen says he has the Sight, and I guess that makes it cool for him to say things like “I saw you die tonight. I saw your body burn. I saw the snow fall and bury your bones” while shaking and sweating and watching nonexistent flames engulf his hand. J-Dog, buddy, what are you smoking, and where can we get some? 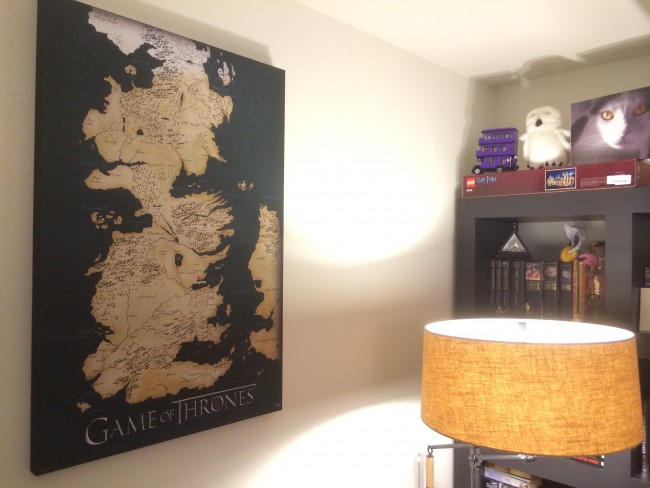 The Moon Door: The Magical Garbage Chute of the Eyrie 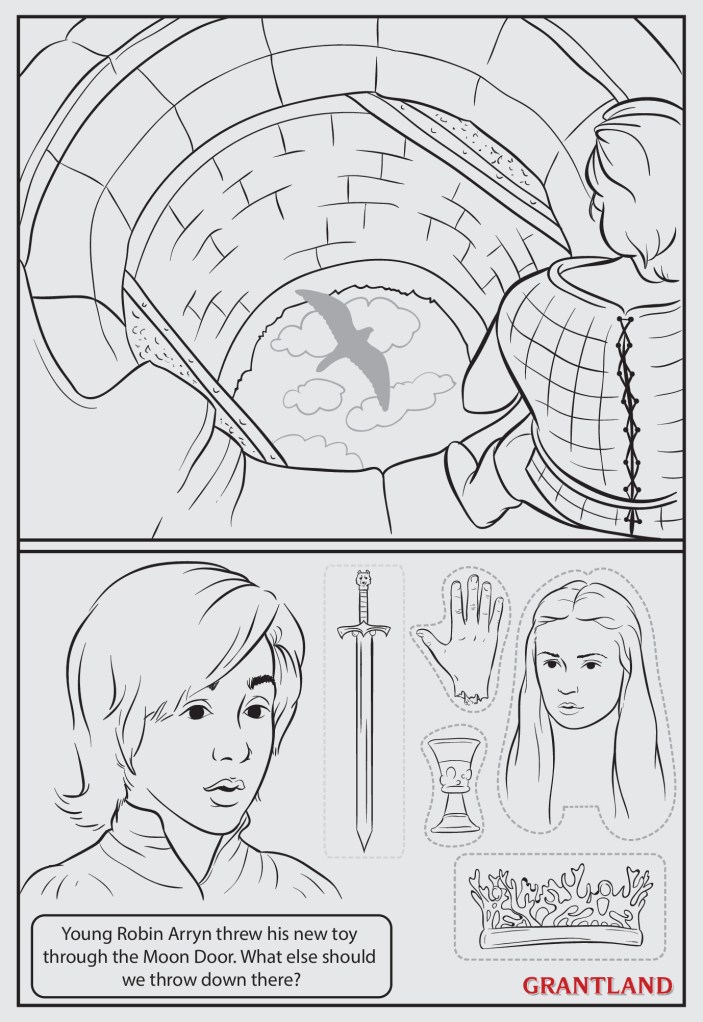 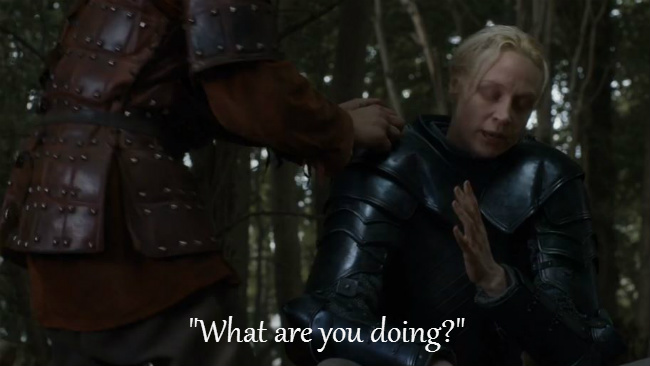 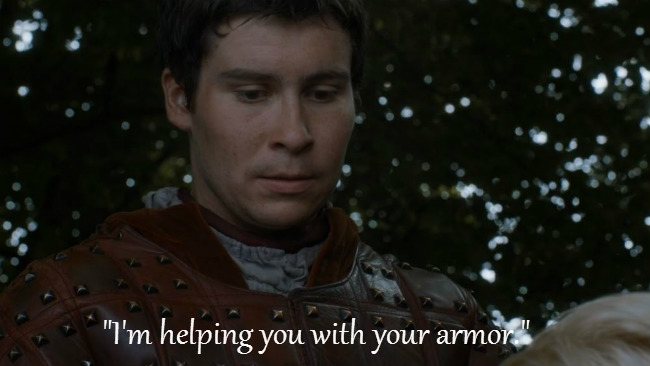 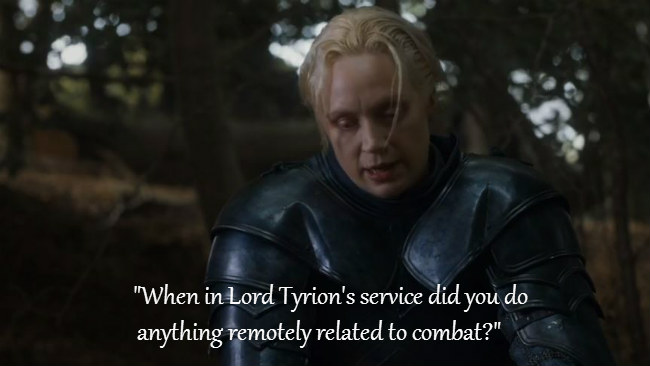 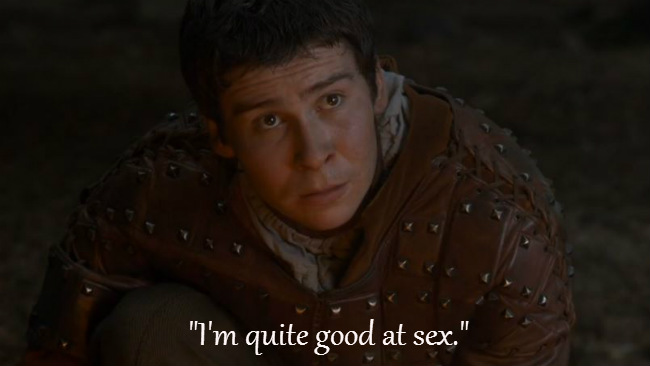 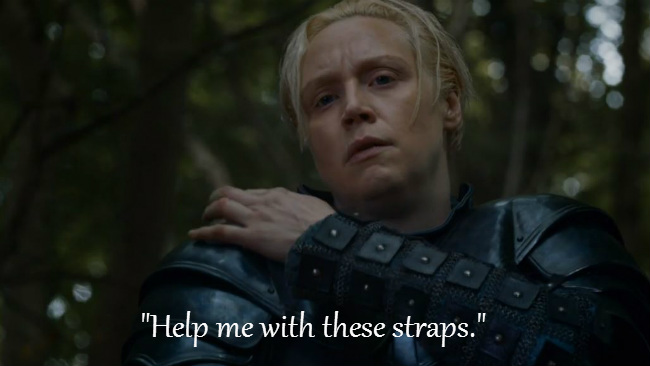 A Song of Tears and Sansa

Zach Dionne: Littlefinger, Lysa Arryn, and the Eyrie weren’t the only players to level up last week. There was also Sansa, who has received a sometimes confusingly large amount of screen time on this show despite having no story line beyond “idealistic Stark girl suffers and suffers more.” Her life since Winterfell has been a hell both infested with and fashioned by Lannisters — daddy beheaded, mommy and big brother Red Wedding’d, kid sis/in-house nemesis missing and presumably dead, baby brothers allegedly murdered by Theon Jerkjoy. (Also: rare direwolf executed; psyche ravaged by Joffski.) It hasn’t been painful doing time with Sansa, despite her being an often obtuse character. She’s had lots of incredible scenes with Cersei, the Hound, and Tyrion — but she hasn’t had any agency or hopes.

Now, the Eyrie. We know it’s going to be huge because Littlefinger’s posted up there, and he and Lysa are sneakily effective scheming demons looking to boost their spots on Westeros’s 100 Most Influential list ASAP. Also: The castle is impossible to invade, and everyone likes a challenge. Also also: The Eyrie has to be a major setting thanks to what Chris Ryan dubbed Chekhov’s Moon Door. Someone’s flying through that thing, and hopefully it’s Littlefinger and/or Lysa and/or, depending how he plays his obnoxious cards in the coming weeks, little Lord Robin.

And Sansa’s living there, at the Eyrie. With these nasty villains. And eventually some army’s coming to try to attack the Eyrie or Petyr Baelish is launching some new plot. And Sansa’s gonna be there, thinking to herself that she’s gettin’ too old for this shit, and she’s going to awaken her inner Cersei and become a total, incredible, powerful boss. It basically 100 percent has to happen.

We’re About to Be Royals

An Excerpt From the Inevitable The New Qarther Profile of Daenerys

The view from Daenerys Targaryen’s corner ziggurat office is impressive: The city of Meereen shimmers like a golden dream below. From this height, you can barely tell that anything’s different. But this city, along with Yunkai and Astapor, is at the center of the most radical social experiment since the Doom of Valyria: non-slavery. Slaver’s Bay is Slaver’s Bay no more.

What, if anything, is different? For one, the groans of human misery actually seem a little louder — apparently slaves suffer in silence but the ex-masters crucified along the roadside aren’t shy about expressing their discomfort. Litter service is friendlier now that the human chattel ferrying you around have a financial incentive; though I found myself instinctively reaching for the whip when we hit a traffic jam near Avenue of the Harpy. Mostly, you see a lot less blood and tears, which is probably a good thing, even if it drains Meereen of some of its native texture.

But plenty of questions remain about what the future holds and who exactly is this Daenerys Targaryen, self-anointed liberator of Slaver’s Bay. There are, of course, her dragons. Watch them circling Meereen’s central pyramid and it’s not hard to see why she’s amassed the following she has. Still, rumors abound of charred livestock continually popping up in the hinterlands, which can’t make her too popular with the local farmers. And there’s the hair, which the hipsters of Slavers’ Bay now ape so shamelessly — but to get a white that pure requires centuries of inbreeding. 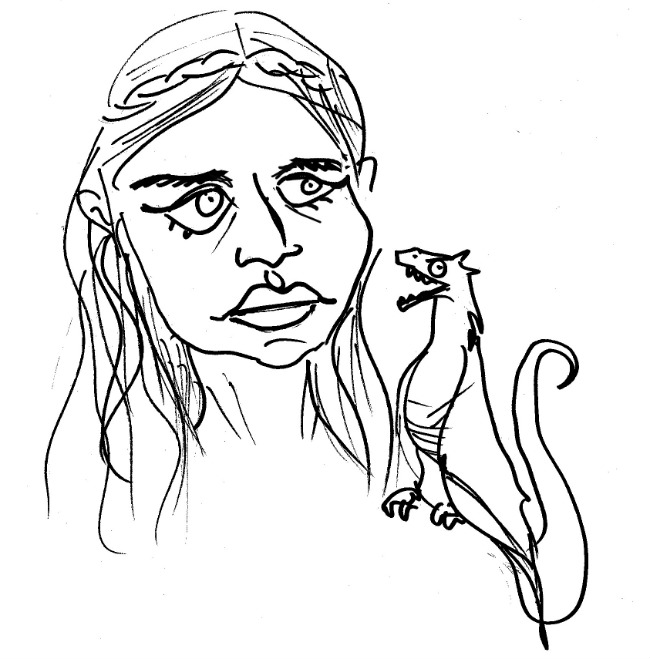 I couldn’t stop staring at it as she strode into the office, a petite figure against the massive stone plinths. Her time among the Dothraki has bred a steely self-reliance even if her face is still that of a young, uncertain teenager. “I will do what queens do,” she intoned regally when I asked what’s on her agenda for Slaver’s Bay. “I will rule,” she clarified after I pushed for specifics. If that strikes you as less than reassuring, you’re not alone. Reports from Yunkai indicate the old masters aren’t entirely down for the count, while Astapor has already moved on to the next royal flavor of the month in Cleon the Butcher King.

But the big question on everyone’s mind is when exactly Daenerys plans to sail back across the Narrow Sea to reconquer her beloved Westeros. When I touched on that, Daenerys’s famed confidence faltered, and she turned to stare dramatically from the balcony. We then stood in silence for what seemed like ages — eventually, I figured she had forgotten I was there, so I slipped out. As I passed her advisers Ser Jorah and Ser Barristan hovering outside like schoolboys called to the principal’s office, her ex-slave translator Missandei, nervously clutching a tablet, intercepted me to vouch for her boss. “She’s a woman of few words, but she does what she says.” Nonetheless, I couldn’t help wondering: Daenerys breezily calls herself the Mother of Dragons, but can she be the Mother of a polyglot multitude of ex-slaves?