The opening shot of Downton Abbey’s fifth season, which premiered on PBS last night,1 shows the blonde-haired redheaded stepchild of the Crawley clan, Lady Edith, pedaling toward the camera as her ancestral home and its manicured grounds recede in the distance. Any college film class with medium-brow British TV on its syllabus could decipher the symbolism: Both Downton and the delightful foofaraw that unfolds within its walls are in danger of being left behind by an egalitarian interwar world where no one can be bothered to don tuxedos for dinner.

Following its initial ITV airing in the U.K. in September. 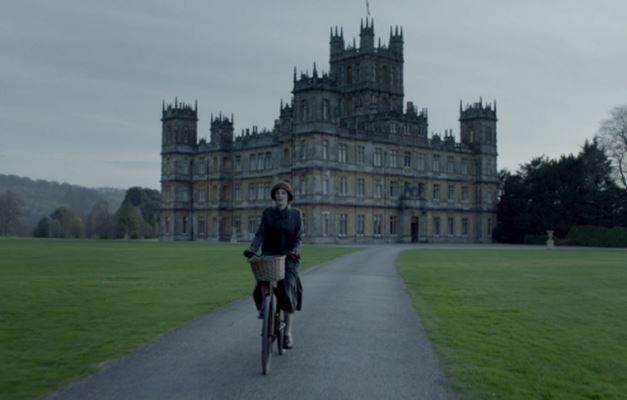 Danger wouldn’t be the worst prescription for a show that’s settled into a lucrative creative complacency. Season 5 finds Downton creator/showrunner Julian Fellowes, like the bicycling Lady Edith, steering toward an uncertain future, having wobbled through a fourth season that saw his show’s critical reception sink2 even as its ratings rose faster than Lord Grantham’s blood pressure after a brush with Miss Bunting. Although ITV has already renewed the series for a sixth season, Fellowes’s involvement could be approaching its end, and even the cast is questioning how long the show can continue. In that context, the season’s first image seemed even more likely to be sending a sign. Maybe it was trying to tell us that the show’s scope would expand to encompass a third dimension: upstairs, downstairs, and the frightening territory beyond Downton’s front door. Maybe it was hinting that Lady Edith would strike out on her own, forging a new life free of scornful sisters, pitying parents, and cold-footed/abducted husbands-to-be. Or maybe it meant that the fifth season would succeed in disrupting Downton’s idyllic equilibrium where Gavrilo Princip failed.

Nah. In Downton’s Edwardian enclave, it’s usually best to bet against upheaval. Lady Edith soon returns to suffer more snubs and Downton eases into its familiar, comforting routine: eavesdropping underbutlers, Dowager put-downs, and significant glances between characters whose respect for propriety prevents PDA. As always, TV’s hardest-working string section alternates between ominous and swelling, accompanying comic relief with puckish pizzicato. “I don’t envy you,” Lord Grantham tells a tanned traveler in Season 5’s second episode. “I’m not very good at abroad.” The same could be said of Downton Abbey, years after the show last spent time in the trenches. Much of its less adventurous middle age has been a balancing act: telling us about turmoil elsewhere while showing us the same splendor we’ve enjoyed ogling all along. One can see why Dan Stevens was so quick to kill cousin Matthew: Escaping Downton’s orbit was the only way to evolve.3

Evidently, it was also the only way to costar with Adam Sandler, work with Ben Stiller, and experiment with other Edwardians.

The premiere picks up as a widowed-but-looking Lady Mary circles a decision between smirking suitors Tony Gillingham and Charles Blake, which she plans to finalize after inspecting Tony’s upstairs and downstairs during the most salacious sketching trip since Jack drew Rose. Lady Edith visits her clandestine daughter at a nearby farm, where to none of her relatives’ surprise, the hovering mother quickly wears out her welcome. A domesticated Branson, whose fuller figure reflects the flagging of his insurrectionist spirit, regains some of the rebelliousness that once put him at the top of Downton’s terrorist watch list. Meanwhile, the Bateses enjoy a brief respite between relationship roadblocks, Barrow exacts his revenge on an exclusionary society by polishing his sneer and stockpiling staff secrets, and Daisy does math(s) and longs for liberation from Mrs. Patmore’s benevolent, aproned rule, unaware that the 1958 future she daydreams about has space for celebrity cooks.

Fellowes remains a master at making us sympathize with snobs and pull for the priggish and prejudiced. Lord Grantham and his calcified sidekick, Carson, are beloved by viewers and villagers despite being as obstinate as the most backward BBWAA voter. Even liberal fans can’t help flirting with conservative feelings for the 47 minutes between Pharaoh’s swaying tail and the scenes from the next episode. While immersed in Downton’s day-to-day drama, any antipathy toward the 1 percent or desire to tax the rich seems suddenly disloyal. Traveling without a valet!, we internally tut-tut. A household with one footman! Each affront to the aristocracy is as dismaying as JetBlue’s decision to start charging for checked bags. With each quip, Fellowes makes us more nostalgic for a lifestyle that few of us experience but many of us envy — if not for the Granthams’ stress-free, low-attachment approach to parenting, then for their furniture. It’s no coincidence that Amazon’s recent recommendations for me include canopy beds.

The passage of time puts the characters’ flaws through a soft-focus filter: We can watch Robert behave like a boor without feeling any of the indignance that animates Branson and Miss Bunting or the embarrassment we’d suffer if a relative expressed the same views at a holiday dinner. Stripped of its bite by our knowledge of the decades to come, the Earl’s obstructionism seems harmlessly quaint. In 90 years, we know, Downton will either be gone or (like its real-life equivalent, Highclere Castle) open to everyone, however much Robert might rant. Like him, however, we hope to delay those days, because any threat to the Crawleys’ fortune jeopardizes the continued supply of dopamine-delivering story. This is OK, the show reassures us, because Downton’s inhabitants are good-hearted people whose attitudes are an artifact of their era.

Over and over, Season 5’s first episode insists that their era is about to end. Lord Grantham bemoans the election of a labor government, the villagers’ lack of reverence for their lord, and the Russian Revolution; Mrs. Hughes mentions the nationwide shrinking of serving staffs; Carson, sounding as philosophical as Stevens from The Remains of the Day, complains of a “shaking of the ground I stand on” during one of many déjà vu–inducing heart-to-hearts with Mrs. Hughes. However, while scarred amputees and tsarist refugees eventually pass in and out of Downton, none of them stays long enough to be a buzzkill. Even cocktails can’t establish a permanent foothold. Fellowes is the showrunner who cried catastrophe, warning us of the peerage’s impending comeuppance without ever interrupting the montage of opulent meals. Downton Abbey approaches real change asymptotically: The Crawleys come closer and closer to ruin, but they never arrive.

Admittedly, these aren’t the same closed-minded Crawleys we met shortly after the Titanic sank: They’ve become much more tolerant over time. Lord Grantham fears losing Branson as fiercely as he once wanted to expel him, and he rolls with the punches delivered by his daughters’ modern dress, sexual indiscretions, and interest in crop rotation. Later in the season, the whole family is quick to embrace Lady Rose’s latest socially unsuitable suitor. The show also seems to have learned some valuable lessons: Although subsequent episodes extend one of Season 4’s most melodramatic story lines, Fellowes avoids adding any new ones as far-fetched as amnesiac impostors or Mary’s fatal attraction to Mr. Pamuk. In fact, much of the season unspools with so little tension that its specifics soon fade from your mind, leaving only memories of the warmhearted moments that will probably persuade you to return for Season 6.

To eat up airtime, Season 5 recycles some story beats from previous years, leaning on another face turn for Barrow, more obstacles between Bateses, and the continuing encroachment of electrical appliances. In Season 1, electric lights and the telephone threatened to destroy civilized life; in Season 2, it was the gramophone’s turn. A wireless set is the latest omen of the end times. By the conclusion of the Christmas special, we’re less than three years away from the first garbage disposal; heaven help Mrs. Patmore if the show lasts beyond Season 6. 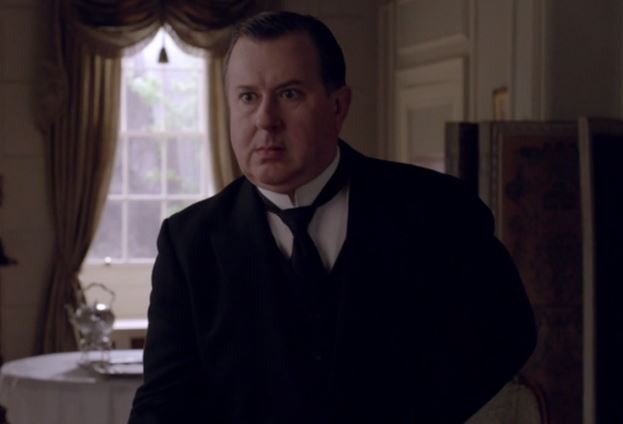 Naturally, the meaty parts of the plot revolve around romance, and the pheromones hang even heavier in the air than usual. Few of the leads have to wait long for a love interest: Fellowes has been busy ’shipping the downstairs staff, and even the Dowager, whose age Maggie Smith estimates at 196,4 shifts from making catty comments about other people’s romantic entanglements to leading a love life of her own. Though 12 years have passed since the first season, only Isis, the family pet, reveals any real evidence of age. Sure, some of this strains credulity, but as ITV’s recent “Text Santa” skit (starring George Clooney) makes clear, everyone’s in on the joke. Strong acting helps sell the weak spots, and while most of the screen time goes to familiar faces, the show is enriched by a bump in status for Spratt (Jeremy Swift), the season’s breakout butler, who graduates from a background role in Season 4 to a prominent part in Season 5. Spratt’s pompous manner, lugubrious voice, and selective, class-conscious serving dovetail with the Dowager’s dry wit.

“New loves, new secrets, new Downton!” PBS’s website promised before last night’s premiere. Season 5 doesn’t deliver on every count — the scripts are new, but the Downton is mostly the same. Carson may accept that “the nature of life is not permanence, but flux,” but the show seems to share Mrs. Hughes’s belief that even the word “flux” sounds “vaguely disgusting.”

If the fictional Earl of Grantham could watch what he’d wrought, his Downton Abbey recap might resemble his review of radio: It’s a “thief of life,” he says, on which people “waste hours … listening to someone talking at them, burbling inanities from somewhere else.” However, if those hours are wasted, they still pass more pleasantly than most. Compared to British TV’s tough watches (Happy Valley, The Fall) or the torture-packed prestige shows littering the domestic lineup, Downton Abbey goes down as easy as an after-dinner drink in the drawing room. When it’s over, you’ll miss it in spite of yourself.