Shhh. Just listen for a moment. Do you hear that? Off in the distance? Is it a train coming? No. It’s not a train. Is it the far-off roar of a G6 engine, circling the entertainment capital of the world, waiting for clearance to land among the private jets of the industry’s most powerful players? No, it’s not that, either. It’s hard to pick it up at first, but if you take off your Beats — you got 10 free pairs at a Cannes gifting suite this weekend — squeeze your eyes shut, and really listen, you can pick it out from the pointless distractions  all around you. It sounds like a party — do parties move? — still pretty far away, but somehow slowly getting closer. Creeping up on you. Now you’ve got it: It’s a stretch Hummer, creeping along Hollywood Boulevard, its pulsating waves of bass so intense they’re knocking all the Best Supporting Dad Oscars off the souvenir-stand shelves, so bowel-rattling they’re rendering all the underfed Spider-Men in front of Grauman’s Chinese instantly incontinent.1 In the back of that Hummer, pounding flutes of champagne in a custom-made hot tub worth more than the balance on your mortgage, is the Entourage movie.

Yes, you still have to pay for the Polaroid.

It’s only two weeks away. June 3. Are you ready? Do you hear the Hummer?

Not everyone can. Like the New York Times, for example, which took an indisputable statement of promotional fact — “The Ride Ain’t Over” — and attempted to twist it into a pointlessly contrarian series of questions: What if the ride is over? What if today’s Hollywood, much more corporatized and buttoned-down than the freer-wheeling days the original series celebrated, is a place unrecognizable to our heroes? The questions, are, of course, absurd on their face, despite the grudging consideration of those quoted in the piece, including Entourage creator Doug Ellin, who offers a shrugging, “It’s harder now.” The boys can — and will — succeed in any environment, even one in which private equity pays the agency bills, or behemoth media conglomerates try to squeeze every last dollar out of historic premium-cable TV franchises with movies nobody really asked for, but that we nonetheless greet with breathless anticipation because we, like the boys, are loyal to the end. Look, there’s the Grey Lady, crashing our party. Someone send Turtle to intercept her, guide her gently to the feet of the Vinnie Chase ice sculpture, where a punch bowl brimming with the finest Colombian attitude-adjuster a disguised craft service budget line can buy is waiting, and encourage the party-pooping crone to bury her upturned nose in it.

The Entourage movie is coming, and she can’t stop it. She can only feel the rush, taste the medicinal drip in the back of her throat. Because this is the uncut shit.

Episode Rewatch of the Week: 11 Questions About Season 4, Episode 1, “Welcome to the Jungle” (a.k.a. “Trouble at the Medellín Shoot”)

How dare you. Are you really questioning the motives of the Countdown to Entourage project three weeks in? Do you doubt that this is one of the most pivotal moments of the series, when the world’s biggest movie star decides to push $116 million of hard-won Aquaman chips into the center of the table and get his passion project made?

If you choose to interpret this choice as an opportunity to make sport of some dedicated craftsperson’s inspired latex work rather than as a celebration of a landmark event in independent cinema history, that’s on you. Maybe you’ve been spending too much time gossiping in the corner with the Grey Lady while the rest of us are doing chilled shots of Avión from the luge built into the ice sculpture’s inseam. Circle ’round, ye joyless buzzards. Here. Here are your photos of Vinnie Chase in his Pablo Escobar fat suit. 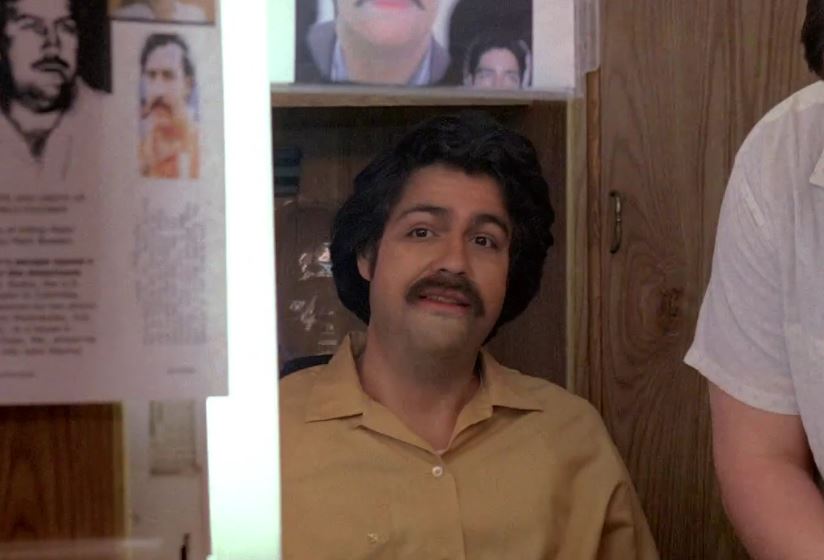 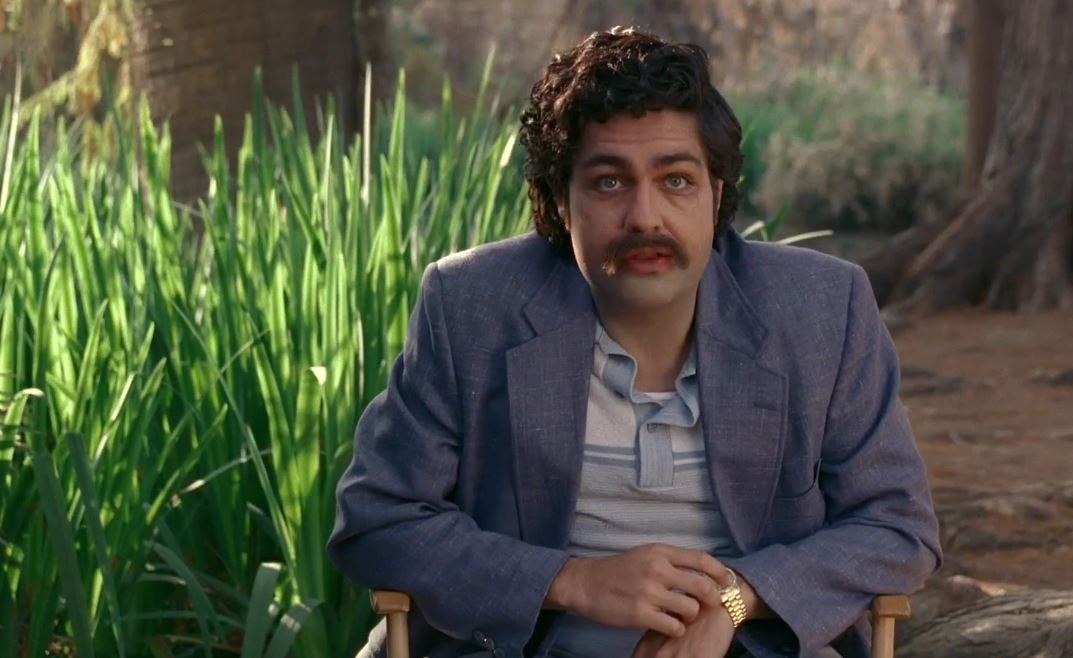 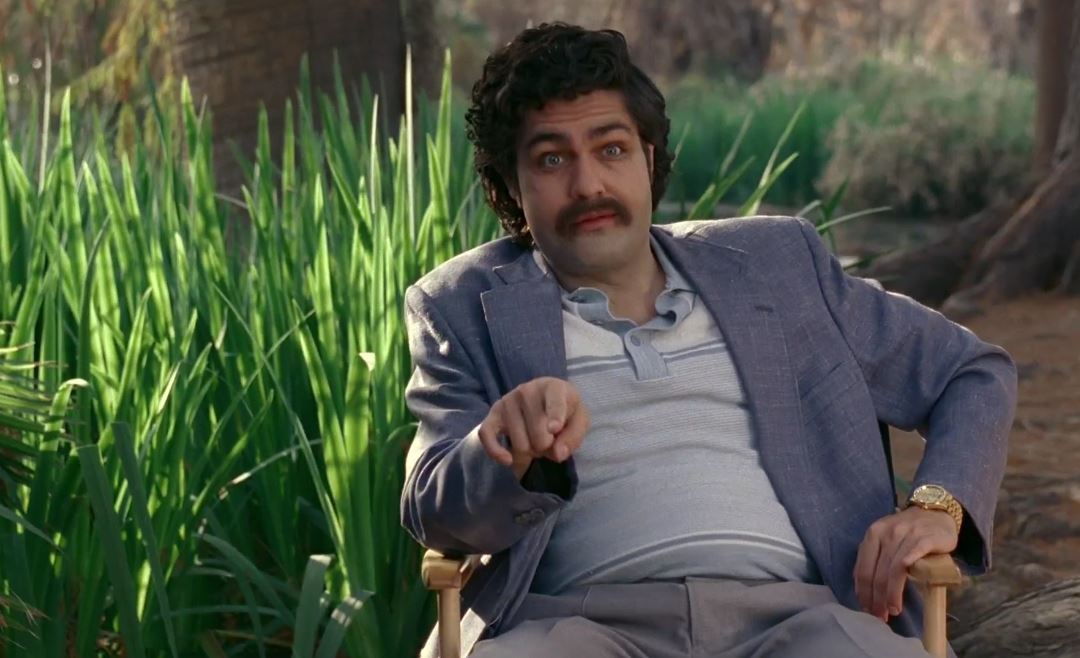 The boys do not share a meal. They do, however, redirect that usual bonding energy by sneaking into paranoid, overmatched director Billy Walsh’s screening room and spying on him as he watches his dailies. It’s a nice moment for the boys, conspiring together to make sure the movie is on track. (It is not on track. It is a colossal mess.) But it does not involve eating together.

They’re on the set in Colombia. Presumably craft service is handling their morning meals, throwing together some mediocre made-to-order omelettes, some boxes of cereal, maybe a selection of fruit for the health-conscious. No Drama pancakes, bro. What a letdown.

Billy Walsh admits that he hates the ending in the script, but he doesn’t have a better one, nor time to write one on the fly before shooting begins. They’re already on location; he wants to begin principal photography and figure it out later. Vince agrees with him. Vince buys into his vision — this is, after all, the guy who directed Queens Boulevard. Vince wants to get started making their movie.

E — steady E, sensible E, responsible E — urges caution. Why don’t they shut down for a week and get the script right? You can take a small budget hit up front or you can take a massive one when you have to shut down the whole thing because you don’t have an ending. Endings are pretty important. That’s why movies save them for the end.

Objections noted. E relents and they start shooting anyway. What could possibly go wrong, except every single thing E could see coming a mile away?

“Welcome to the Jungle” is presented as footage from a documentary about the making of Medellín; Ari, unfortunately, is not on the set, and appears only in talking-head commentary about the turbulent film shoot. The job of fighting with E over every detail of Vince’s activities falls to Billy Walsh. Ari’s tangential importance to this episode is also a major letdown, Entourage-rewatch-wise.

Again, Ari appears only in documentary footage. We’re forced to imagine the off-camera opportunities where he might have reason to humiliate a person who unconditionally supports him, possibly involving a creative fusillade of demeaning, penetration-centered insults over a cameraman leaving a half-finished cup of Starbucks on Ari’s desk. Poor Lloyd. It’s nice to imagine he had the week off, but Ari would handcuff him to his desk before allowing that.

It’s very hot in the jungle. Like, Valley hot. Plus humidity. 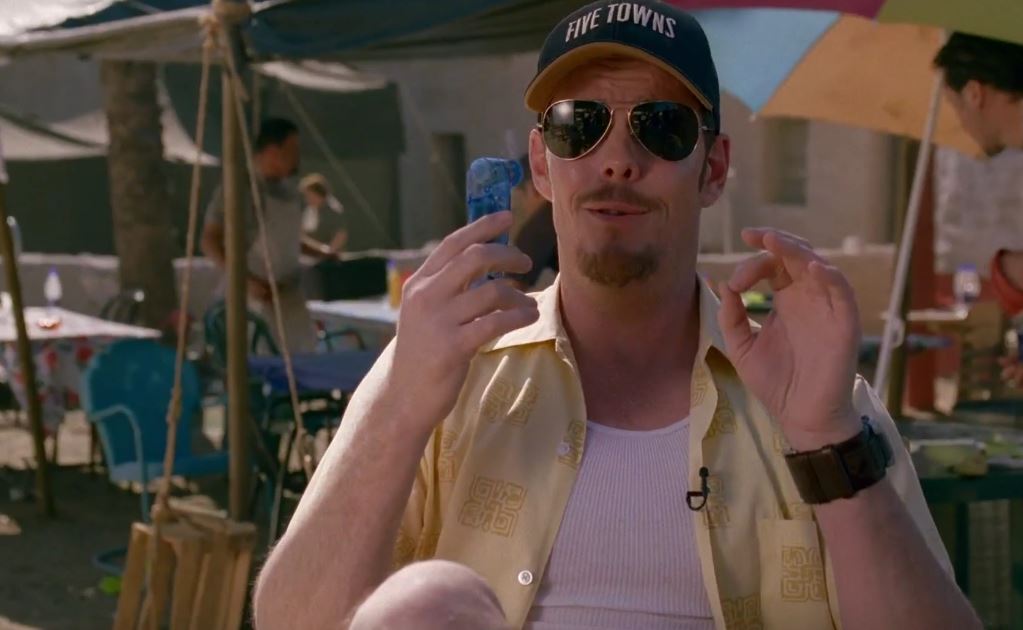 The boys do not smoke weed. Billy Walsh does, however, brandish a machete as a directorly affectation. 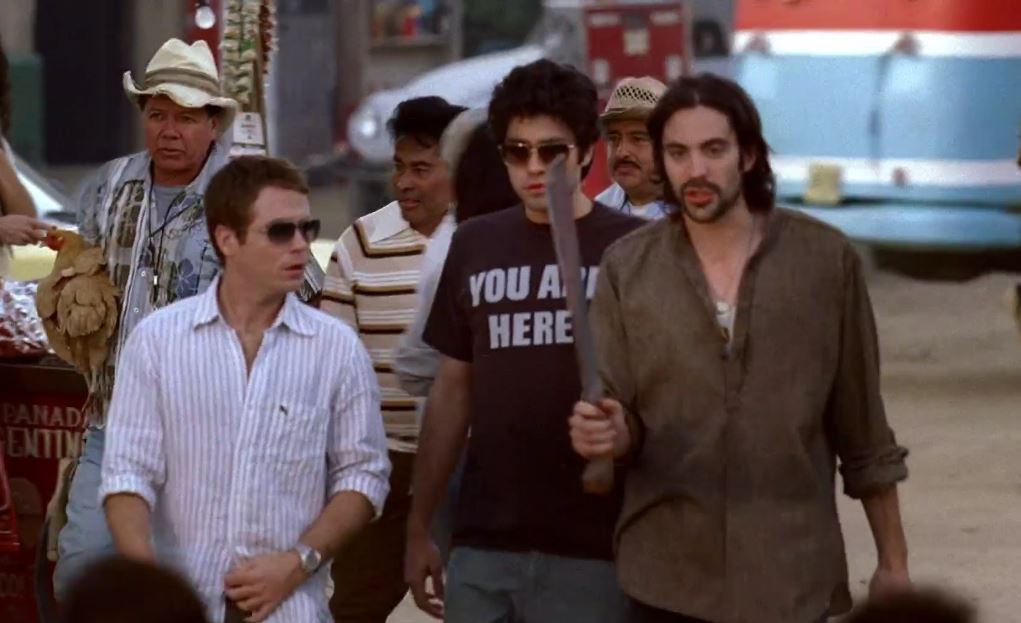 No. Wow. What’s going on here? No Drama pancakes, barely any Ari, Lloyd isn’t dehumanized by a monster who doesn’t appreciate his inherent goodness, no weed, no one getting laid because of their proximity to Hollywood’s hottest star. If it weren’t for all the amazing shots of Vince in the fat suit, one could argue that this wasn’t one of the greatest Entourage episodes at all. Oh. Does it suddenly sound like we’re backtracking on our pure motivations for picking this episode? Hmmm. Maybe it does. Let’s do one more fat suit photo and see how we feel.

We will now entertain the possibility that we only chose “Welcome to the Jungle” for the fat suit. Also a little bit for the mustache.

Have you heard of Sofía Vergara? Currently the biggest female star on TV’s most-watched non-CBS comedy? She’s in this episode, playing “Village Girl,’ a local actress in whom Billy Walsh becomes obsessively, stalkerishly interested. She was not yet “Sofía Vergara” then, so we can’t technically consider this a “cameo”; it’s more “just an acting job.” Getting a part like this on one of the top 10 HBO original series of 2007 was probably a career boost at that point in her Stateside professional development.

While Vergara’s appearance doesn’t qualify as a cameo, self-effacing or otherwise, we ask you to peep this situation — 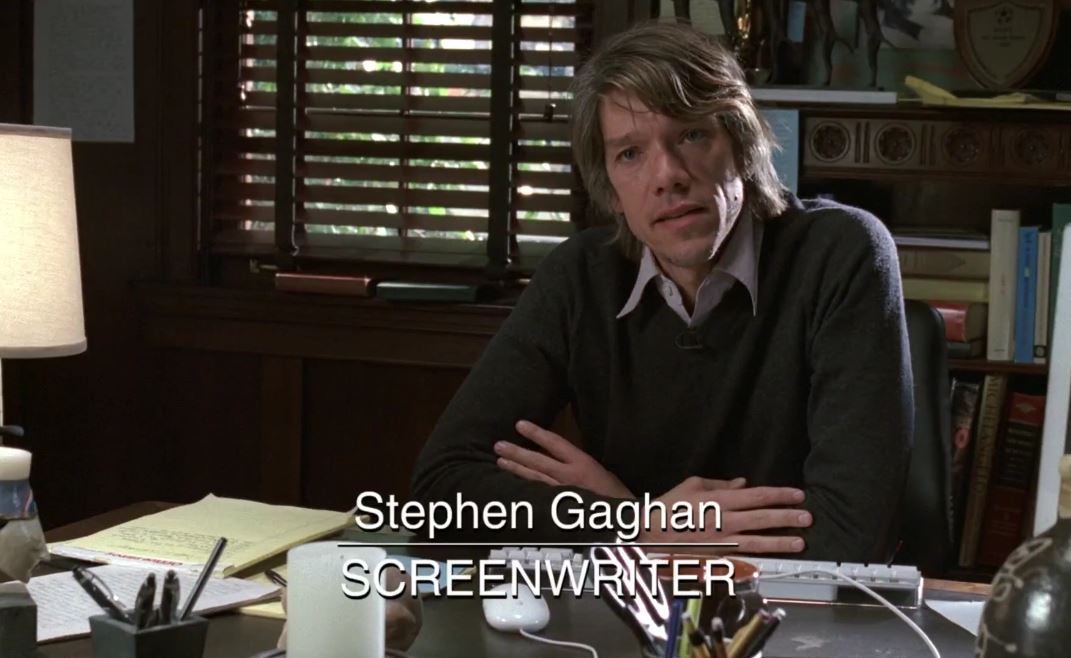 That’s right. That’s Oscar-winning Traffic screenwriter Stephen Gaghan all up in your self-effacing-cameo business. He’s impulsively hired to rewrite Medellín‘s ending at the behest of a writer’s-blocked, overwhelmed Billy Walsh. And the moment he arrives on set, he’s immediately fired, because Billy Walsh stayed up all night in the feverish throes of creativity, perfecting his script. “I’ve never had anyone pay me not to work. It was nice, actually,” muses Stephen Fucking Gaghan — that’s how he’s referred to, more than once — as he considers the delicious absurdity of his Hollywood existence.

The President can’t eat a hamburger or get a hand job without the press jumping down his throat. Power is not defined by one’s position, but rather by one’s ability to enact change on a whim. The President can’t always use his power because of Congressional cock-blocks. I, on the other hand, routinely move billions of dollars around the world, construct and topple empires, shape international culture, and I do it all without having to take shit from anyone.

–From The Gold Standard: Rules to Rule By, by Ari Gold, as excerpted here.

Promotional Tie-In Video of the Week: While We’re on the Subject, Why Couldn’t Cadillac Kick in a Few Bucks to Save Ari’s Daughter Too?