This isn’t a boast or attempt to be contrarian: it’s just a statement of fact. I never watched Breaking Bad. I mean, I’ve seen a few episodes, obviously — I know the deal. Walter White is a chemistry teacher who turns to dealing meth. Bryan Cranston rots on the cellular level. I don’t even know how it ends. Somehow, as a fully participating member of the American popular culture, I still don’t know how it ends.

We live in an era in which the monoculture has fractured. Instead of collective points of consumption — the Johnny Carsons and Seinfelds and miscellany in between — we have a few shows that, through critical benediction, manage to take on enough ballast that they feel like necessary items. They are the shows you’re supposed to have seen, if you think in terms of Shows You’re Supposed To Have Seen.

Mad Men is one, but it’s still Matthew Weiner’s Cheever daydream; I distinctly remember reading years ago that Mad Men is to TV recaps what the Velvet Underground is to starting bands. Game of Thrones is another, but, in the age of television hegemony, HBO’s fantasy Learjet feels like the submerged side of the iceberg; there isn’t another entertainment franchise that has led to as significant of a eureka moment as GoT. Breaking Bad is the perfect middle: It’s an object of obsession for a mass market of viewers, as well as the type of fiction that hit so hard it sparked talk not just of eras, but of the ends of them.

Better Call Saul, then — a show focused around Saul Goodman, a lawyer character on Breaking Bad who, it must be said, I know nothing about — is both a fully functioning show on an American cable network and a sort of legacy act. Rather than debut in the cold, peculiar way that most shows do, eased in at best through the familiarity of an actor or a showrunner and at worst via the antitrust of a network’s modest suggestion, Better Call Saul literally took its name from a point of pre-love. If you watched Breaking Bad, then Better Call Saul was familiar to you. Deeper than a spinoff, it became a postponed sentence; here, gifted from a god of sorts, was an opportunity to spend a little more time in a world where you’ve spent a lot of time. Because that’s the thing about these shows, aside from how they possess the collective conscience and force passion on the level of a relationship: They also take a whole bunch of hours to watch.

Considering and respecting this investment and dedication, let’s say most of the many folks who have tuned in to Better Call Saul are legacy viewers. What of the rest of us? It’s a serious question. When you premiere a show like Better Call Saul, the appeal of which lies so strongly in the substance of another narrative, are you punting on the uninitiated? Based on the advertising that led up to Saul’s premiere, I’d say yes. After watching the show itself, though, I’d say that, if this was the approach, it was misguided. Even if you thought crystal meth was a type of jewelry, Better Call Saul would still be excellent.

Aside from the meta-narrative and general common-senseness of it, the thing that most leads me to think Better Call Saul was purposefully intended for the Breaking Bad crowd is its opening sequence. A man — you know how TV shows work; the main character, the man, Bob Odenkirk’s protagonist — is working in a Cinnabon. We’re in black-and-white, as telling of a nod toward the past as firewood-size cell phones. Odenkirk’s character makes his cinnamon buns, and then he retires to a home that looks like it still might have the tags on it somewhere. He pours a drink, signal número uno of a Haunted Past, and he sits down, and he watches commercials for a legal office with the slogan Better Call Saul. This isn’t a matter of putting two and two together: It’s more looking at a plus sign and being like, OK, I have to add.

When we transition to color and Jimmy McGill, a younger Odenkirk, is str-str-struggling through the degradations of a public-defender case, the creative team of Vince Gilligan and Peter Gould have done all the heavy lifting they needed to do. I don’t know who Saul Goodman will be, but I know he’s far more than McGill is now. I don’t how many boats this show will lift, but it’s definitely some kind of rising tide.

Although the Cinnabon lead and other episode-open flashbacks are a bit too coloring-book for me, they remind the Breaking Bad crowd of a very important truth: They exist. 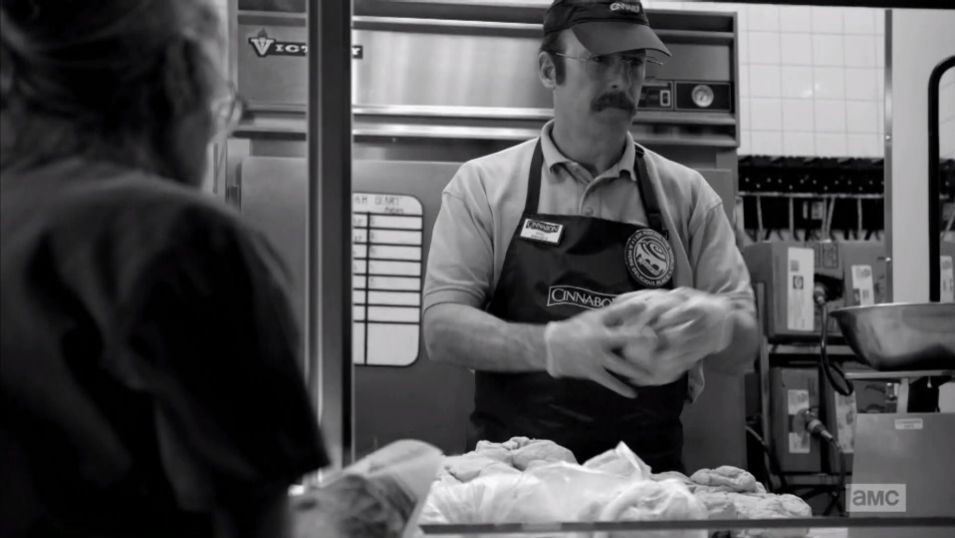 What’s most astonishing about Better Call Saul is how little it makes me feel like I’m missing something. The show is as self-contained as the best TV work; it reminds me of The Americans, or, in a much closer spiritual analogue, Twin Peaks, in the way every thread of the production — the characters, the set design, the cinematography, the plot — seems to hum with the same cohesive weirdness. What truly signals that liftoff is the point at which Better Call Saul appears to leave the Breaking Bad stuff behind. One bit of info I did catch is that the Tuco character comes over from Breaking Bad, and it makes sense; in the world of Better Call Saul, he feels abrupt and a little overdone, like there was some essential scene situating him that got ditched for time, explaining why he’s so scary and angry and big. There is: It’s a whole different television series.

But starting in Episode 3, and peaking with Episode 5, when Jimmy McGill starts taking on a variety of clients and cases — and, by the end of the episode, when both his brother Chuck and his frenemy Mike have been activated — Better Call Saul has fully achieved its own gravity and momentum.

Odenkirk, who clearly should’ve been a star decades ago, turns Jimmy/Saul/whatever into one of the most invigorating protagonists on television right now. It’s a startling turn away from the antihero archetype of White and Draper, et al. Jimmy’s a dick and maybe a psychopath, but he’s also a strangely bleeding heart, and his sins coexist pretty soundly with his good deeds. Beyond Jimmy, this version of Albuquerque, New Mexico, holds up as a vibrant setting on its own, whether it’s the hublike courthouse, Jimmy’s archaeological car, the arch self-importance of the Hamlin, Hamlin, and McGill firm, or the cops, criminals, and hapless citizens rotating in and out of the frame.

The best compliment I can pay Better Call Saul is that at no point, past the Tuco situation, have I felt like I was missing out on some part of this extended world. While a huge part of the fun for legacy viewers might be knowing all that that entails, I’d say it’s even more invigorating when a new show can suggest that wider universe without any help.