How does Littlefinger know Lysa Arryn?

In fiction as in life, never trust the bankers. Lord Petyr Baelish, the Alan Greenspan of Westeros, has, it seems, been pulling the strings all along. The very first tug on those strings — the murder by poison of Jon Arryn, Lord of the Vale and the Hand of the King — has now been revealed to have been carried out by Jon Arryn’s wife, Lysa, at the behest of our Littlefinger. Then, suddenly finding himself without a top adviser, King Bobby Baratheon — always looking for any possible excuse to not attend Small Council meetings — road-tripped North to offer the office to his childhood friend Eddard Stark. Littlefinger has been steadily and stealthily nudging events along a path toward greater and greater chaos. After an assassin attempted to finish off a comatose Bran Stark, Littlefinger identified the assassin’s knife as belonging to Tyrion, setting the stage for direct Stark-Lannister conflict. Much blood and unhappiness has followed. That initial bit of backroom skullduggery was possible only because of Lysa Arryn’s long-held fondness for — bordering on obsession with — Lord Baelish, proving once again that it’s not the size of the finger, but the the ruthlessness of the brain controlling it that counts.

Petyr Baelish’s father was a minor lord from the Fingers, a grouping of rocky peninsulas jutting into the Shivering Sea on the northeastern coast of the Vale. Westeros is a highly stratified society, and wars are a great way for people of different ranks to strike up relationships with others outside their normal class- or geography-based social circles. So it was that Finger Senior made the friendly acquaintance of Lord Hoster Tully of Riverrun — father of Catelyn and Lysa — during an exceedingly complicated (even by Game of Thrones’ standards) conflict called the War of the Ninepenny Kings, which took place about 40 years before the events of the show. The friendship between Finger Senior and Hoster Tully led to Petyr being sent to Riverrun as a ward* of Lord Tully.

(*In a world without lawyers, social contracts like alliances call for a more substantive form of collateral than just the honored words of a couple of nobles. Fostering — sending one’s children to be raised by other houses — is a common method, along with marriage, of cementing political relationships. Think of them as hostages with benefits. After Balon Greyjoy’s rebellion of 289 was put down, the price he paid to retain his position as Lord of the Iron Islands was to send his last surviving son, Theon, to Winterfell as a ward. Downside: Your offspring are raised by your enemies. Upside: They are alive and (in theory) being raised in a fashion as befits their noble station. The implicit threat being: Nice family, be a shame if anything happens to it. Keep in mind that Princess Myrcella Baratheon — secret daughter of Jamie and Cersei — was sent to ward in Dorne as part of the throne’s continuing Dornish outreach program. This will probably be important.)

Answers to your burning Game of Thrones questions.
It was during Petyr’s time at Riverrun that he met the Tully sisters, in what was basically the Westeros version of Some Kind of Wonderful. He was in love with Catelyn, but Cat had placed him securely in the friend zone. Lysa, however, was head over heels for Petyr and quite interested in finding out if the finger was indeed little. Clearly, those feelings have never abated, and Lord Petyr has found a series of ways to turn them to his advantage. Petyr Baelish’s amoral–Horatio Alger rise from minor noble to Master of Coin to Lord of Harrenhal continues apace. With his somewhat shotgun wedding to Lysa, Lord Baelish adds “Lord of the Vale,” with its impregnable castle and men-at-arms, to his titles, and has key-to-the-North Sansa Stark in his doublet pocket. 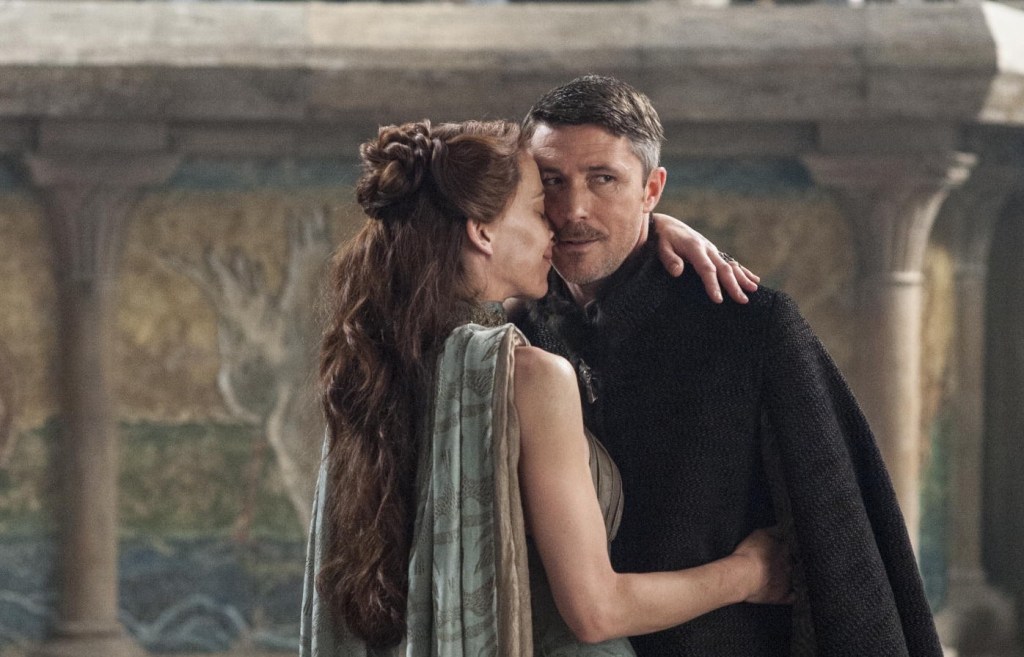 Keith asks, “Who are the people on Arya’s bedtime hit list?”

Joffrey: Lunatic spawn from a dried puddle of a gene pool. Had Arya’s friend Mycah the butcher’s boy, as well as her entire family (as far as she knows), killed.

Meryn Trant: Knight of the Kingsguard, ruthless Lannister sycophant. Killed (HE IS DEAD; STOP THIS) Arya’s fencing coach, Syrio Forel. On Joffrey’s orders, slapped Sansa in the face and forced her to look at her father’s decapitated head.

The Red Woman (Melisandre): Had Arya’s friend and Baratheon bastard Gendry taken to Dragonstone so she could leech his kingly blood (using real leeches) and would have executed him, but for Ser Davos’s conscience.

Beric Dondarrion: Undead leader of the Brotherhood Without Banners. Sold Gendry to Melisandre.

The Mountain: The hulking older brother of the Hound; a murderous rapist and Lannister minion. Tortured Gendry when Gendry and Arya were held in servitude at Harrenhal.

Emily asks, “With regards to Arya’s before-bedtime ‘hit list,’ what’s her beef with Thoros of Myr and Beric Dondarrion? I thought the Brotherhood Without Borders were good guys?”

Good guys in relation to the Freys, Boltons, and Lannisters? Sure, I guess. They still sold an innocent boy to a witch who intended to drain him of his blood and eventually burn him alive. So it’s relative.

David asks, “Was the revelation that the Lannister gold mines have run dry another departure from the books? And how could even Tywin have kept this explosive information so secret?”

The reveal that the Lannister mines are depleted is somewhere between a departure from the novels and a clarification, leaning toward departure. The books have dropped all sorts of hints regarding Lannister insolvency, as has the show, but this is the first time we’re hearing that they’re actually broke-broke. Tywin dating the mines running dry to three years ago tells us something about the circumstances. Three years ago in show-time brings us back to Season 1. The new Hand, Eddard Stark, learned that Littlefinger had been financing the crown via loans of Lannister gold, to the tune of some six million gold dragons. At that point, the crown’s primary expenses were general upkeep — servants, hay for the horses, guardsmen, that sort of thing — plus the odd tournament and yearly royal Name Day celebrations. With Eddard Stark’s imprisonment and later execution, things took a turn for the wildly expensive as the War of the Five Kings kicked off. So, going by this timeline, right around the time the crown was faced with the massive and unavoidable expenses of a war it could not afford to lose, the famous Lannister mines ran dry. Need cash fast? Call the Iron Bank.

As for keeping Lannister insolvency secret — I’m sure it was made clear to the miners and smallfolk, through a variety of means, that the first rule of Mine Club is “Do not talk about Mine Club.” There is no muckraking Lannister County USA-style labor movement in the Westerlands, and if Tywin wanted to, say, close up the mines with every last worker inside, who could object?

Will asks, “Can you explain what’s going on with Dany and all the slaves she’s freed? Are they all just following her and the Unsullied? And if that’s the case, what are they eating and how are they surviving?”

These questions are why Dany decided to stay in Slaver’s Bay to polish her Khaleesi governing skills rather than rush off on her newly captured boats to conquer King’s Landing. What will her domestic policies be? How do you feed, clothe, and house the masses who follow you? How do you maintain security as an invading power over a restive population? How do you balance diplomacy with warfare? And, besides, shouldn’t she wait until the dragons are fully grown? So, while staying put is a wise, thoughtful decision, it’s also supremely annoying from this Maester’s perspective. KHALEESI, THE SEVEN KINGDOMS ARE WEAK. YOU WOULD KNOW THIS IF YOUR ADVISERS WERE DOING THEIR JOBS INSTEAD OF TRYING TO SLEEP WITH YOU. WHY HAVEN’T DIPLOMATS BEEN SENT TO WESTEROS TO GAUGE LOCAL SUPPORT FOR YOUR RETURN? IF YOU WANT TO PRACTICE RULING, PRACTICE WHERE IT MATTERS. SER JORAH IS THRONE-BLOCKING YOU. FUCK THIS DUSTY BACKWATER ARMPIT OF A REGION THAT NO ONE CARES ABOUT AND GO HOME.

Chris asks, “One of my roommates is continuously miffed by Benioff/Weiss accelerating ahead of the book timeline in certain cases. How do you think this fits into the plan for the TV series?  At this rate, they will be ahead of GRRM by next season … ”

No need to wait for next season; the show is ahead of George R.R. Martin now, and I don’t think the showrunners really have a choice. The narrative structure of Books 4 and 5, which I talked about last week, demands that the show merge the novels’ timelines to maintain a cohesive story. Cast members have contracts; child actors get old; and the groundwork for the upcoming season — four books’ (in theory) worth of story, of which only two are currently written — has to be laid.

Is the show’s depiction of Ser Pounce different from the books’?

Yes. Slight spoiler, but it’s cute, so whatever: In the books, Ser Pounce, along with two other kittens — Boots and Lady Whiskers — are actually gifts from Margaery. 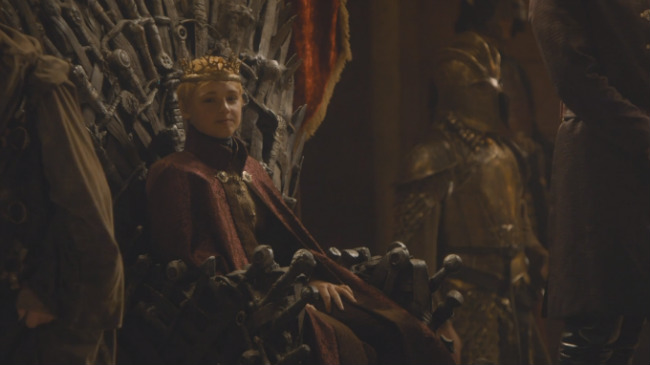 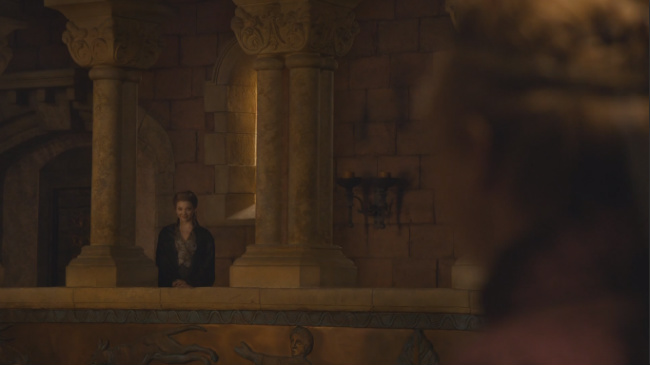 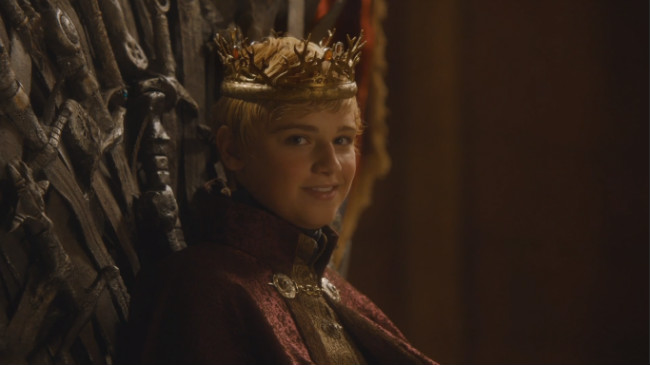 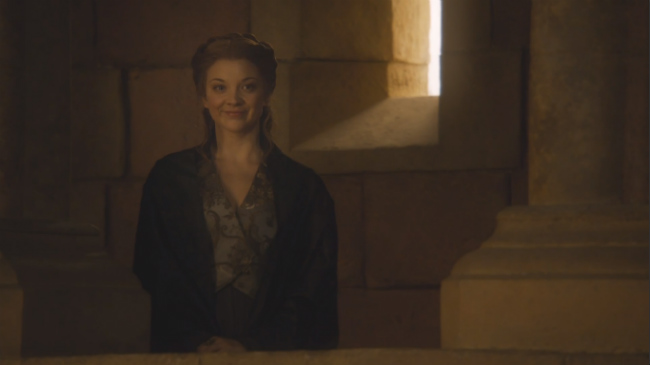 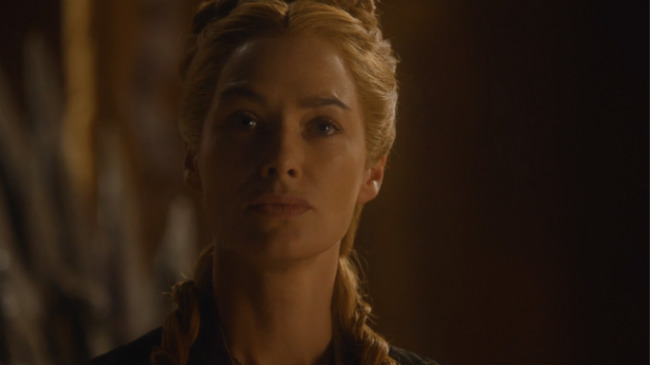 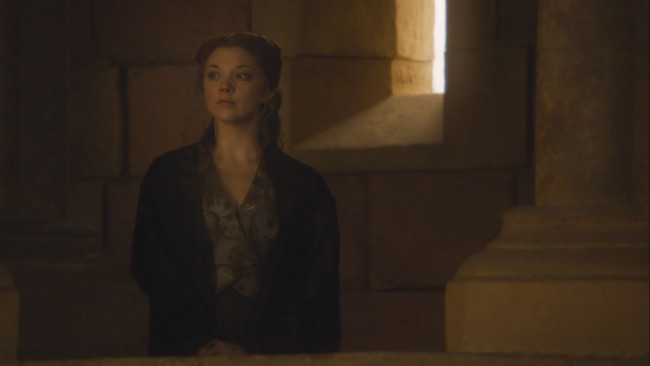