Few things in life are as dependable as Archie Comics, whose formula for the comic-book series about the lives of archetypal teens in the everytown of Riverdale has remained more or less unchanged since the Archie character debuted in Pep Comics in 1941. Trends may change, Betty and Veronica might use slightly more hep lingo over the years, but for the most part it’s reliably the same. Hardworking blonde Betty Cooper and snobby rich bitch brunette Veronica Lodge are best friends and romantic rivals for the love of ginger wastrel Archie Andrews, whose best friend Jughead cares only about eating burgers.

The Archie Comics universe is wide and deep; even minor players like nerdy Dilton Doiley and homely Big Ethel get solo stories within the giant realm of Archie anthology titles. (The two once had a romance.)

One of the key tenets of the Archieverse is that nothing of fatal consequence ever really takes place. Couples form and disband. Fashion styles like mod, disco, and new wave float into the comics and then back out again. Sometimes new players come into the fold: hot-for-comics redhead Cheryl Blossom, who looks just like Betty and Veronica but with red hair; or Chuck Clayton, the first black character, introduced in 1971. But for the most part, Archie and its various iterations center on a core gang: Archie, Betty, Veronica, Jughead, rich dick Reggie Mantle, and lunkhead jock Moose Mason and his babely girlfriend Midge Klump. Archie is basically about sex, although nothing more scandalous than a kiss is ever shown. Plots revolve around school and friendship, but are mostly about how Riverdale is a very horny place to live if you are Archie Andrews, the inexplicably magnetic redhead whom all the girls love. I have always felt that Betty and Veronica’s rivalry over Archie is not so much about Archie as it is just a primal loop of envy and possession. That they usually fight over Archie is incidental.

Archie’s stodginess and resistance to change, its insistence on wholesomeness despite the (at most) PG-13 subject matter, has always been part of its charm. But recently the powers that be have loosened up slightly and let Archie get a little more weird. Archie has always actually been pretty weird. Its stuck-in-time quality mixed with its attempts to be au courant always make it feel like a strange dystopian ’50s otherworld, like in Back to the Future Part II. Archie has done spinoffs like Super Teens (the gang as superheroes), Archie 1 (the gang in prehistoric times), Explorers of the Unknown (the gang as Jack Kirby’s Challengers of the Unknown). 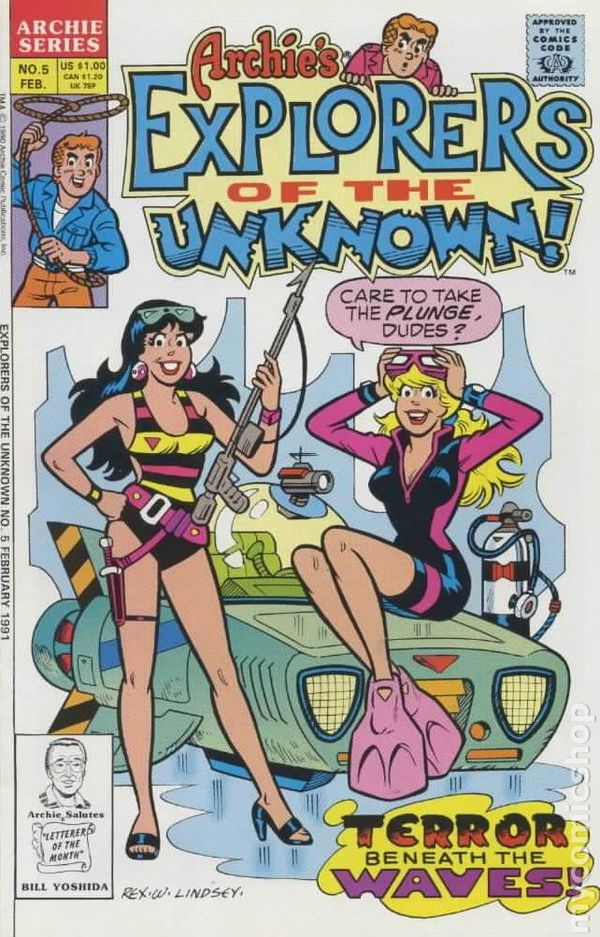 There was once a parody of melodrama parody sitcom Mary Hartman, Mary Hartman called Betty Cooper, Betty Cooper. Jughead’s dog got a spinoff called Hot Dog where he lived in a futuristic house with a robotic butler and traveled through space-time to different dimensions. My personal favorite Archie crossover was a 1994 one-shot called Archie Meets the Punisher in which, well, you know. That was as weird as it got, and it’s pretty weird, until recently. In 2010, Archie Comics revived original title Life With Archie for a series called The Married Life, authored by Paul Kupperberg. The Married Life follows two parallel universes: one in which Archie has married Betty (shown in Archie Marries Betty) and another in which he ends up with Veronica (in Archie Marries Veronica). This is the only way to resolve the eternal question of Archie: Betty or Veronica? Truly answering it wouldn’t provide any satisfaction; his ideal state is hovering between the two. Betty is a better person, but he’s more sexually attracted to Veronica, most likely because of her wealth — Veronica and Betty are literally physically identical with different-colored hair. In 2012, Archie Comics introduced a title called Kevin Keller, about Riverdale’s first openly gay teenager, which has been a big hit. 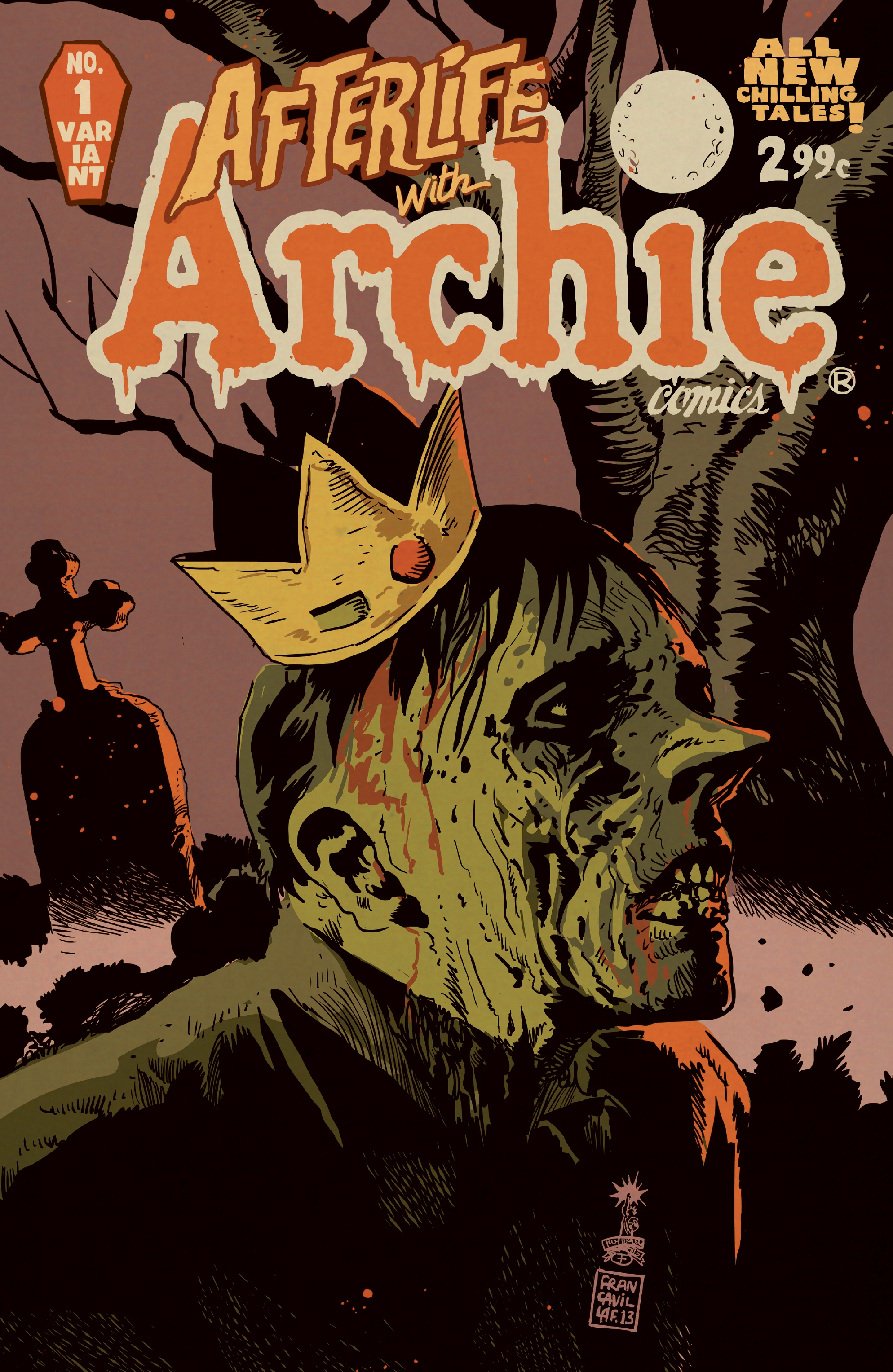 On the heels of the successful Life With Archie, Archie Comic Publications Inc. green-lit a 2013 title called Afterlife With Archie, a zombie-themed spinoff. Written by Roberto Aguirre-Sacasa with art by Francesco Francavilla that recalls ’50s golden-age EC Horror comics, Afterlife With Archie is the first-ever book from the mythos to be rated “teens and up.” Because although regular Archie comics are about teenagers, they are really aimed at children who aspire to be teenagers. Afterlife With Archie has ancestors. There is a gonzo MAD Magazine parody of Archie called “Starchie” from 1954 from Will Elder and Harvey Kurtzman that is incredibly dark, weird, and funny. But it’s still shocking to see a Zombie Jughead, his face melting off under the paper crown, on the stands at comic-book stores where it’s being sold instead of the title’s traditional newsstands. Afterlife With Archie is creepy and great, like an Archie version of Charles Burns’s teenage viral horror graphic novel classic Black Hole. Afterlife With Archie opens with the death of an animal and proceeds to kill off several beloved franchise characters in vividly gruesome ways. The first four issues of Afterlife With Archie sold out, proving that there is a market for adult Archie enthusiasts. Hopefully, we’ll get more indie variants of Archie titles, and not just the horrifying “realistic” manga makeover they got in 2006, which was more uncanny than any zombie could be. 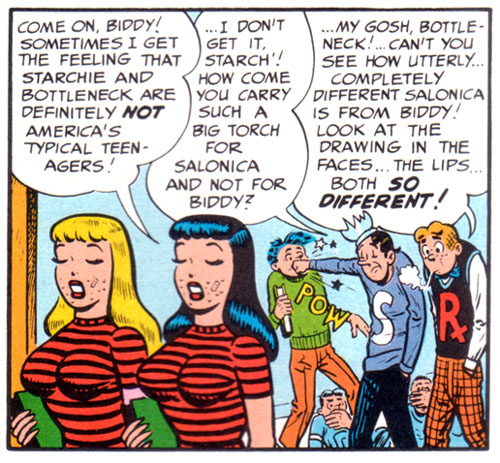 Archie Comics’ latest publicity stunt is perhaps even more unexpected than a zombie alternate universe or a female Thor. Archie Andrews is being killied him off in Life With Archie, which has continued to take a soapier, more mature angle as it portrays adult life in Riverdale. In the future Riverdale, the Archie gang deals with depressing adult issues. Ms. Grundy dies of old age, Jughead struggles financially, and Cheryl Blossom gets breast cancer. In a new issue, it’s been announced, Archie Andrews dies trying to protect his friend Kevin Keller from a bullet after Kevin, now a U.S. senator, campaigns for better gun control in Riverdale. There’s gun violence in Riverdale? So much for escapism! Even crazier, the death of Archie is supposedly the penultimate issue of the entire series, which will presumably close with Archie’s funeral. Archie Comics CEO Jon Goldwater says that Archie dies in both parallel universes. If Archie was 18 at his character’s birth in 1941, he’d still be a spritely 93 today, were he not the world’s oldest continuous teenager. But like Superman (d. 1992, RIP) and Wolverine beside him (d. 2014, RIP) chances are, Archie will be resurrected. Even if he isn’t, he’ll still live on forever, in double digests and our hearts.