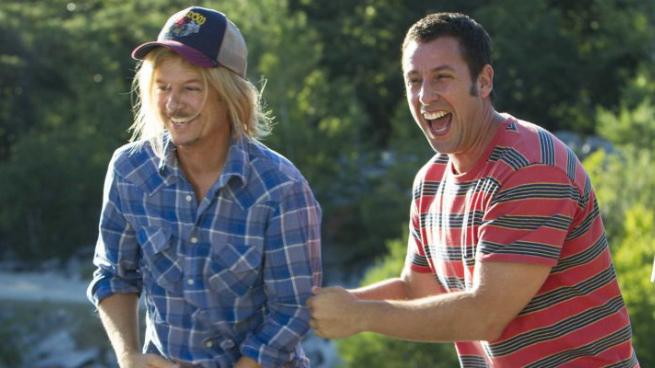 Hollywood’s most cynical and redundant awards, the Razzies, have chosen this fine Wednesday in January 2014 to remind us that last summer’s Grown Ups 2 and The Lone Ranger  were no-good, bad, silly-ass movies. After Earth, A Madea Christmas, and Movie 43, too — just, ugh! So … we’re done here? Those roundly misguided, cash-grabby, unfunny, in some cases possibly demonic films sucked, and now we can move on? No? There’s a whole award show based on burning these movies down one last time? And this award show is taking place for the 34th year in a row? OK, on to the (un)lucky/indifferent nominees then.

This year will mark Adam “Most Overpaid Actor of 2013” Sandler’s chance to three-peat in the Worst Lead Actor category. (That’s My Boy won it for him in 2013, and the combination of Just Go With It and Jack and Jill sealed the deal in 2012. The latter movie won him Worst Actress, too, because … the Razzies.) Grown Ups 2 is the year’s most-nominated film, with eight: You’ve got Worst Picture, Worst Sequel, Worst Ensemble, Worst Screenplay, Worst Lead Actor, Worst Supporting Actor for Taylor Lautner, Worst Supporting Actress for Salma Hayek, and Worst Director for Dennis Dugan. After Earth, A Madea Christmas, and Movie 43 each have six chances to win/lose/see absolutely no impact on their overall legacies either way. Johnny Depp and Naomi Watts, nominated for The Lone Ranger and Diana/Movie 43, find themselves in the line of fire for the first time, alongside low-hanging fruit like Katherine Heigl, Sylvester Stallone, and Selena Gomez, and fruit that just kinda sits on the ground like Ashton Kutcher, Lindsay Lohan, and Kim Kardashian. The awards may risk credibility and timeliness in persecuting Scary Movie 5 in the Worst Prequel, Remake, Rip-off or Sequel category, but the Razzies are willing to go there.

Ever wonder how the Razzies pick these things, by the way? Flee now if you have an aversion to magic-ruining: It’s just 750 Golden Raspberry Award Foundation members who pay to join and then vote. One-year memberships start at $40. And there’s one more thing happening with the Golden Raspberry Awards in 2014 — they’re hunting for $35,000. From fans. To fund a telecast for next year. And since TV channels are now endless to the point of meaninglessness, but still the place that most old media and web ventures hope to wind up, you can expect the telecast to materialize, followed by the Razzies Network within two years. They’ll show all the bad movies, but a variety of winking emoji will sit down in the bottom left corner, reminding you that you’re only watching ironically.