The Rebirth of the Celtics 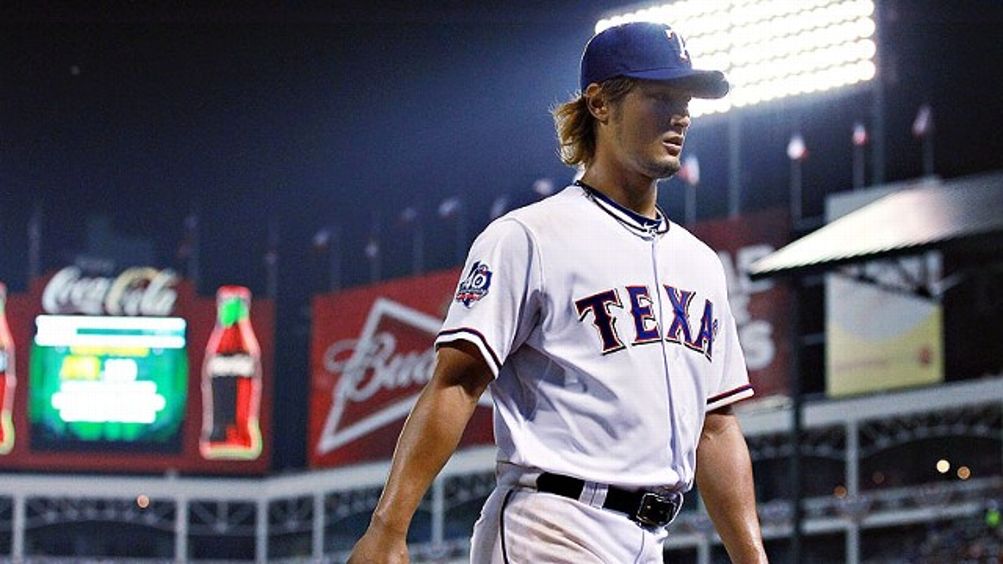 At 7:05 p.m., the Texas Rangers’ PA system is playing “Crank That (Soulja Boy).” The song has been chosen for its booming chorus of “you.” On the night of Yu Darvish’s Major League debut, this will not be the most egregious “Yu” pun. Not even close.

My friend Robert and I are in the second deck. We peek down, hoping to see a former president. George W.’s presence usually indicates that the Texas Rangers are in the midst of a Historic Night — both George W. and George H.W. indicates a really Historic Night. Alas, the owner’s box is Bush-less — only Nolan Ryan is in there, wearing a bulky sports coat. So let’s call Darvish’s start — maybe the biggest pitching debut Arlington has seen since Nolan1 — Semi-Historic. With tons of upside.

Darvish stares at his first batter, Chone Figgins. The crowd is standing, curious, excited. No one has come to Dallas with Darvish’s peculiar mix of promise and mystery since Dirk Nowitzki arrived from Germany, or Herschel Walker from the USFL.

A little ripple of encouraging applause dies out when Darvish throws his fourth straight ball.

Darvish strikes out the second hitter he faces, Dustin Ackley, with an off-speed pitch. Now, a Yuuuuu! chant begins in earnest. But then Ichiro Suzuki hits a bloop single to left. Former Ranger Justin Smoak loads the bases. “Welcome to America!” someone yells behind me. This is also not the worst Yu-related humor of the night.

Darvish’s outing continues to disintegrate from there. He throws a first-pitch ball to five straight batters, as Rangers blogger/über-fan Jamey Newberg would later note. Darvish has a horrible time keeping his fastball down. His 23-minute inning from hell ends up like this: four runs, 42 pitches, separate mound visits from Ian Kinsler and Elvis Andrus, and a surreal moment in which the scoreboard flashes an ERA of 108.00.

I also notice that the Yuuuuu! chant takes a subtle turn. It starts as a WWE-style taunt for the 6-foot-5 righty with at least six pitches. But as runner after runner reaches base, Yuuuuu! becomes a sympathy cheer — a cheer for someone people like but don’t quite trust. In Dallas–Fort Worth sports history, this Yuuuuu! ranks behind Daryl Johnston’s Moooose! but slightly above Steve Buechele’s Buuuuue!

Over-amped,” Ron Washington will say later. Well, yes. Granted, it’s a weird moment in Arlington. Last week, a bunch of us native Texans called home and — not for the first time — asked, “Mom, did you survive the tornado?” The morning of the game, talk of Darvish’s debut was knocked off sports radio when Mark Cuban made Lamar Odom’s inactivity an official status. It was a juicier story even if Cuban paid approximately one-tenth to Odom what the Rangers committed to land Darvish.

There are a couple of ways to understand Darvish’s value to Arlington. First, you should see Darvish as part of the Rangers’ exhaustive, 40-decade search for an ace, one that stretches from Fergie Jenkins to Ed Correa. Even after making the World Series twice, the Rangers lost their ace: Cliff Lee in 2010 and C.J. Wilson in 2011. The good news was, the Rangers had good pitching to lose.

When they outbid the rest of baseball for Darvish, he became Something to Get Excited About. “A couple of years ago,” my pal Robert says, “it was all fat guys in Hamilton jerseys.” Now, we see fat guys wearing Darvish’s no. 11 — at least, the T-shirt jersey you buy when you decide you like a player but won’t quite commit $300 to him.

Darvish is also a de facto cultural ambassador. The “Metro” section of the Dallas Morning News banners with a story that notes the hoopla has “a Middle East as well as a Far East flavor.” Darvish’s father, Farsad, is Iranian. The article holds out hope that Darvish — like the Oscar-winning film A Separation — could be a non-nuclear plank of Iranian-American relations. “He’s tall. He’s handsome. He’s accomplished,” a local professor tells the News. “Every Iranian wants to associate with him.”

So here you have a Japanese Iranian man pitching in a state that, as of spring break, was advising its citizens not to travel to Mexico. A Darvish flop wouldn’t set back geopolitics. But his success might mean something more profound than those old Mavs ads where Dirk Nowitzki gave viewers a tour of a German restaurant.

Before Darvish comes out for the top of the fourth, the Rangers’ JumboTron finds a fan holding a sign. The sign says, “We Love Yu Long Time.” Now that, sports fans, was the most offensive pun of the night. In the fourth, Darvish has a one-two-three inning, getting Ichiro to ground out, and finally he’s got some momentum.

After the Rangers spot him an 8-5 lead, Darvish again goes one-two-three in the fifth. The scoreboard has his ERA at a mere 10.38. Darvish walks back to the dugout. Yuuuuu!

Darvish is at 97 pitches as he comes out for the top of the sixth. Getting through the inning — delivering a not-terrible outing and leaving with the lead — becomes his modest goal, and everyone in the ballpark knows it. Darvish gets two outs, but then walks Dustin Ackley. Now Mike Maddux, the Rangers pitching coach, comes out to the mound to encourage him. Yuuuuu!

But Ichiro — him again — singles to center. As Ron Washington leaves the dugout, I notice two things. One, Darvish does an excellent impression of a pitcher who pretends he doesn’t see the manager coming. Two, when Wash arrives, there’s a little moment when Darvish looks at all the infielders in turn. I think he’s not sure who to hand the ball to, though Jamey Newberg watches the replay and reads it as Darvish offering each of them an apology. Darvish walks back to the dugout to a huge ovation, but doesn’t acknowledge the crowd.

Later, after the Rangers win 11-5, Ichiro will tell the press Darvish’s non-reaction is a sign of his seriousness. “You saw the crowd did a standing ovation and he didn’t tip his cap, he wasn’t very happy or satisfied with his pitching, and that shows pride. That’s a good mentality. That’s what I liked about him.”

Mike Napoli has a different explanation. He says the team forgot to tell Darvish to tip his cap.