LAS VEGAS — I didn’t sneak in much gambling Wednesday, only because I was presented with the opportunity to play “Serious Journalist” for the day.

It’s not difficult to look like a real reporter — you simply need to strut around like you’re important, gain 50-75 pounds, mess your own hair up and look like you haven’t showered in two weeks (as for the scraggly beard that looks like it might have some crumbs from last week, that’s optional). Unfortunately, I forgot to bring my sportswriter costume to Vegas, but the good people at Mandalay Bay still provided me with credentials.

Why am I mentioning this? Because Mandalay offered a “Media Day” (of sorts) Wednesday for Rahman-Lewis II, so I spent some time rubbing shoulders with the rest of the media corps and watching Lewis, Rahman and the inimitable Don King in action. I’m guessing there were four goals for this Media Day …

1. Drum up interest in the fight.

2. Make sure everyone has enough material and quotes.

4. Remind everyone that Don King can be unbearable, insane, delusional, crafty, perversely entertaining and completely horrifying, sometimes all at once.

… and if that was the case, they succeeded on all fronts.

Here’s how the day unfolded:

11 a.m.
Time for the Media Brunch, held inside the actual Mandalay stadium! Woo-hoo! Free food! Nothing puts a smile on the faces of sportswriters quite like free food — they descend on those buffet tables like seagulls finding the remains of a dead shark.

I ended up grabbing a breakfast croissant (rating: 2 out of 10) and joining a table filled with members of ESPN’s boxing crew, namely, Brian Kenny, Al Bernstein, Max Kellerman and their two producers. I’ve known Brian for years — we used to spar together at Emanuel Steward’s Kronk Gym in Detroit. Actually, I just made that up. But I know Brian well enough that everyone allowed me to sit in on their meeting.

The best part was the complete nonrecognition on everyone’s face when Brian introduced me to the group. I might as well have been the Mandalay Bay cabana boy. Anyway, Team Kenny was scheduled for extensive airtime on ESPNEWS, starting at 12:07, leading into the final press conference (which was tentatively scheduled for 1) and wrapping up with a live spot on the 6 p.m. ET SportsCenter. That meant everyone was already dressed up in their “I’m on TV!” outfits, wearing makeup and preparing for the nitty-gritty details of their show.

Here’s why I’m telling you this: More brainpower and planning go into these remote segments than you might think. Before Wednesday, I watched those on-location segments on SportsCenter (like “Baseball Tonight” during the World Series) and mistakenly believed that they ad-libbed the whole thing. Nope. The announcers and producers map out their segments from the opening “Hellos.” Maybe it’s not scripted, but it’s pretty close — like giving a speech with flash cards that you can’t see. They even have corresponding video ready for certain points, with the announcers knowing that they have to keep speaking for X amount of seconds while the video plays.

It’s incredibly complicated for the host, almost like playing quarterback — you’re keeping track of 10 different things at once, calling audibles, reading the defenses, remembering the plays and trying to execute as smoothly and professionally as possible. Play-by-play offers more ad-libbing; even the on-the-spot highlight shows feature some scripted material. But these remote segments are a different animal — it’s basically orchestrated ad-libbing, if that makes sense. You can’t run long, you can’t drift and you have to somehow seem natural, all at the same time. Hard to pull off.

One more thing: Listening to the give-and-take between Kenny, Kellerman and Bernstein convinced me of two things:

1. It’s impossible to pull off an effective studio show and/or remote segment without genuine chemistry among the people involved. Even in Wednesday’s meeting, as they were supposed to organize a master plan for their segment, the boys ended up having a lively discussion about the fight, replete with jokes, arguments, obscure references and just about everything else you can imagine. You can’t fake this stuff. Either it’s there or it’s not.

2. I’m really excited about this fight. Everyone at the ESPN table believed that Lewis and Rahman genuinely disliked one another, which rarely happens in boxing anymore. And even though the consensus was that Lewis will win — and he’s a 3-to-1 favorite — Rahman showed enough spunk and confidence last April and this week that you can’t underestimate him. Should be a great fight. I’m glad I’m here. 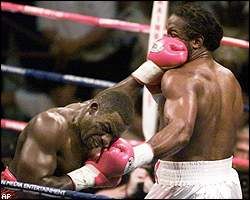 On my way to the bathroom, I heard the familiar sound of Don King’s voice and realized that I was inadvertently missing Rahman’s press conference with the print media. Headlining a small conference room loaded with writers, Rahman was wearing a U.S. flag bandanna and a fancy warmup suit, while King was wearing his ominpresent tuxedo. King’s hair was disappointing in person (doesn’t stick up that much), but one thing was for sure: You don’t forget the first time you’re standing in a room with Don King.

First of all, the man is loud. It sounds like he hooked Bose speakers up to his lungs. In person, he comes off like even more of a sitcom character — all clichés, grandiose statements and posturing, with the added bonus that he’s standing 15 feet in front of you. An indelible experience. For the first few minutes, I was mesmerized and actually felt myself enjoying his performance, the same way it’s entertaining to watch a dog hump somebody’s leg. But you tire of King pretty quickly. Believe me. Within 20 minutes, I was tuning his voice out like it was a car alarm.

As for Rahman, he totally won me over. I’m not quite sure why he hasn’t gotten over (to borrow a wrestling term) with the American public yet; the Rock possesses enough charisma, he’s eloquent enough, he has a cool nickname, he’s a good guy and he can be quite funny at times.

For instance, after King hogged the first 20 minutes of the press conference, Rahman was finally answering his first question when King inexplicably handed him a box containing a gold Rolex (a good luck present for the fight, plus Rahman had his Rolex broke in that “Up Close” scuffle with Lewis). So Rahman stops talking, takes the watch, examines it quickly, nods, says, “Thank you, Don,” and goes right on talking. Highest of high comedy. You could tell that Rahman is smart enough not to take King too seriously.