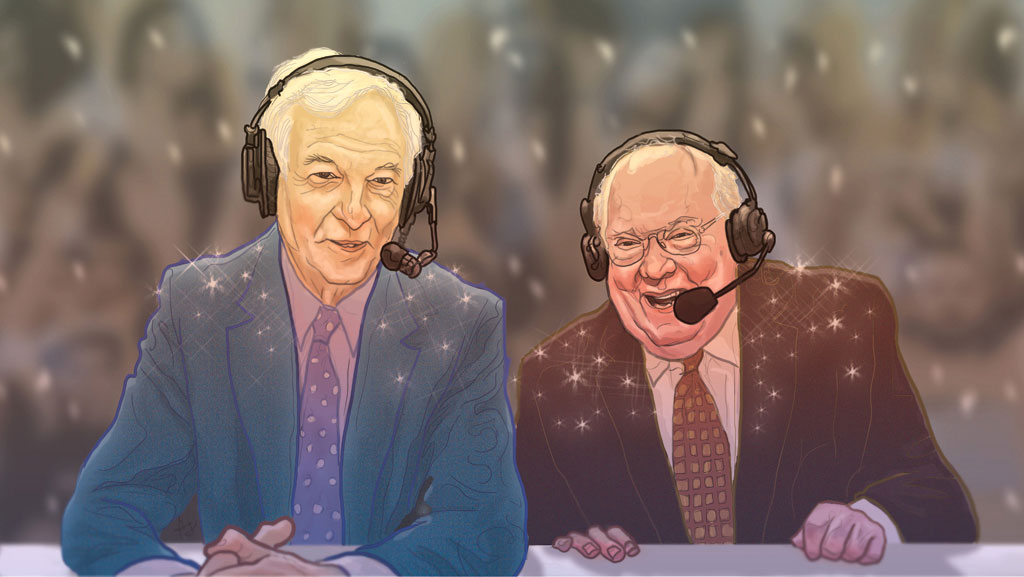 I am here to talk about love, but first I have to say something about hate, and about the purest, foulest, most unrepentant form of hate there is: namely, the hate that sports fans feel toward TV commentators.

You’ve experienced this, yes? You know its fearsome seductiveness, its sweet, dark pull. You have looked upon Joe Buck and — out loud, in a room by yourself — called him words that could murder a houseplant. You have listened to Tim McCarver and actually stood up to tell him to shut his mouth. You have heard Dick Vitale, and you have known in your heart that if the dark side of the Force had its own dark side of the Force, if there were a separate subregion of cosmic evil that even highly evil dudes had to be lured and corrupted into, you would be fully there, robes and everything, blasting blue lightning from your fingernails and cackling like you just won a sandwich.

It’s not hard to come up with reasons why announcers are so hateable. The nature of sporting events is that they’re highly charged, testosterone-driven affairs that produce frequent rage flash points; the nature of announcers is that some of them are Reggie Miller. Announcers are completely objectified by their medium1 and — at the same time — they’re trying to control your own subjective perceptions.2 They are as powerless as a perfume commercial and as invincible as the voice in your head. They are, furthermore, often weird simulacra of human selves, Ken dolls of sound, articulate in a plasticky way yet incapable of interesting speech. If you had a friend who watched every game with you and never stopped barking that defense wins championships, you would brain him with a queso ramekin.

During a multigame, multiday sports marathon like the NCAA tournament, announcer hatred can reach glow-in-the-dark levels. You have seen the E*Trade baby seven billion times. You have listened to the studio guys fake-laughing till your own throat rasps out of sympathy. Your tolerance is a ruin. One more knee-slappy catchphrase, one more vamped opinion about the officiating during a let’s-take-seven-minutes-to-put-three-tenths-back-on-the-clock timeout, and you feel like your sanity will be a ruin, too. NASA probably has satellite maps of this, red bulbs of frustration blooming on the coasts, going greenish over South Dakota.

At these moments, finding a game with an announcer who’s actually good — who doesn’t drive you nuts, who makes basketball more fun — is like spotting a ship after 10 years as a castaway. It’s a relief. It’s a delight.

That’s where love comes into this.

The argument of this column is that Verne Lundquist and Bill Raftery are great. Those guys are the best: That’s my whole theme here, and it doesn’t get any more elaborate than that. I apologize for the straightforwardness of the #take, and also for being unoriginal.3 But it’s a tough world, and sportswriting’s long on bitterness. Sometimes you want to appreciate a good thing while it’s in front of you.

Here’s something someone tweeted a year ago:

Verne Lundquist and Bill Raftery are like Statler and Waldorf from the Muppets, only the exact opposite.

And that’s really it, isn’t it? Not just because they kind of look like the legendarily grumpy Muppets — Raftery tall and angular, Lundquist shorter and rounder; Raftery 80 percent nose and forehead, Lundquist zero percent neck — and not just because they make a natural team. It’s also because the mood they conjure up is so jovial and, crucially, so mild. Like their Muppet-cynic twins, they’re two old men4 with great seats at a show, talking nonstop and laughing at each other’s jokes. But instead of being there to score points off the performers, they’re there to enjoy a night out — more or less like everyone in the audience.

For some reason, mood is easy to overlook when you think about the qualities of a good sports announcer. What you think about is how well the guy5 strings sentences together, how many facts he gets wrong, or whether he has a distinctive vocal style à la Marv Albert or Howard Cosell. But announcers are also like the music in a movie. They let you know how high the stakes are. They let you know to what degree you’re supposed to find these events important. Have you ever seen one of those YouTube gag clips that recuts, say, some classic horror trailer with romantic comedy music? Turns out the right soundtrack can transform The Seventh Seal into a buddy comedy.6 It’s like that with commentators.

At one end of the scale you’ve got John Facenda, the old NFL Films guy, who made every third down feel like the last stand of a civilization that was expiring in the dust; at the other end you’ve got Jeff Van Gundy, who makes every NBA play feel like a brainstorming session for some sketch-comedy show that will never make it to air (only likable!). Between the formal-biblical and the goofball-casual there are all sorts of gradations. My least favorite sports mood is probably the kind of corporate-epic register favored by Buck and a lot of NFL announcers, where you get the sense that the event is important because the commercial spectacle around it is so massive and self-sacralizing — that the lights make the thing matter, rather than being there because it matters. This tone leaves not much room for humor, or at least humor beyond a sort of wry awe at the scale of things. It leaves even less for warmth. Humor and warmth are humanizing. Sports, in this outlook, is bigger than that.

Now contrast this with Lundquist and Raftery. You come back from a TV timeout deep in the second half of some early-round West Region game in Flagstaff, Arizona. Some band in blue-and-white horizontal-striped rugby shirts is doing to the White Stripes more or less what the two teams on the floor are doing to basketball. Fans are waving giant head cutouts of some point guard who led the Mountains Majesty Conference in 3-point attempts. His mom’s in the stands, openly weeping for some reason. A coach in a too-big suit and a tie the color of diseased algae is furiously stabbing a clipboard with a marker. Everyone, everyone is sweating. The officials’ pants look vaguely prison-issue. The shot clock’s horn keeps going off. The atmosphere is chaotic, but it’s a friendly chaos, almost domestic. The green team finally inbounds the ball and then …

Has anyone ever been better at conveying the mood of a scene like this than Lundquist and Raftery? Lundquist brings his merry, slightly stiff grandfatherliness, not always the most nimble with players’ names but quick to appreciate anything good they do, and quick to make left-field jokes about how much he likes the Killers, or about how a promo directing viewers to “unleash your body’s beast mode” must have been meant for him personally. Raftery brings his twinkly baroque assortment of catchphrases and deep basketball knowledge and a sort of happy slyness that’s totally unique in sports.7

They’re not too formal or too casual; they’re theatrical in exactly the right ways. They fit perfectly together, and they fit perfectly into the breezy melodrama of March Madness. They worked their first game together more than 30 years ago; they’ve been regular partners for 15, and they’re back at it tonight, calling Iowa State–UConn and Virginia–Michigan State. They have killer anecdotes about getting drunk together in the ’80s.8 You get the feeling that Verne, who also calls football and golf and who got his start voicing Bowling for Dollars in Dallas in the early ’70s, would be the same beaming presence doing cockfighting or bobsled. Bill, who won 154 games coaching Seton Hall from 1970 to 1981, is a hoops guy through and through.

But here’s the key, I think. Lundquist and Raftery treat college basketball games like they’re important. But they always locate the games’ importance in the human beings who make them happen. That sounds like a simple thing, and it is — but really, how many commentators could you say that of? Jim Nantz’s void-folk baritone always seems to be saying the Corporation will take care of you. For other announcers, media narratives are ends in themselves, or the only thing that matters is a personal brand, or the only thing that matters is winning. Lundquist and Raftery project a whole different kind of context, one in which the game is worth watching not because it is being, axiomatically, watched, but because for the 25 or so players and six or eight coaches and handful of officials and timekeepers and cheerleaders and moms and dads and clarinetists, the game was worth having in the first place.

And this, in turn, means they make college basketball seem about as important as it is. They make it seem like a thing that can be done more or less well, and that can cause actual people actual happiness or sadness. They don’t seem to think that the fate of Byzantium hangs on what happens before the next Buffalo Wild Wings bumper. They are happy to be there because what they’re watching — the real thing, not the Tronned-out version we’re getting on television — is something they’re happy to see.9 And so we get to hang out, at home, with two guys who are great at talking about sports, while they watch some kids play a game they like and put it in a realistic perspective for us. Again, it seems so simple, but the list of broadcast teams that last sentence could apply to is not inspiringly long.

I don’t mean to violate their example by making too much of this. College sports is broken all to hell, and a couple of announcers making you feel nice about a power forward can’t change that. The existence of Verne Lundquist is no substitute for reform.10 But this is also true: There are still some things about college sports that are worth preserving from cynicism. Most of those things have to do with the people who play in the games and with the games themselves. And that’s where Lundquist and Raftery have their balcony show — on the human side of a sport that’s often not human enough, in the momentary joy of it all.