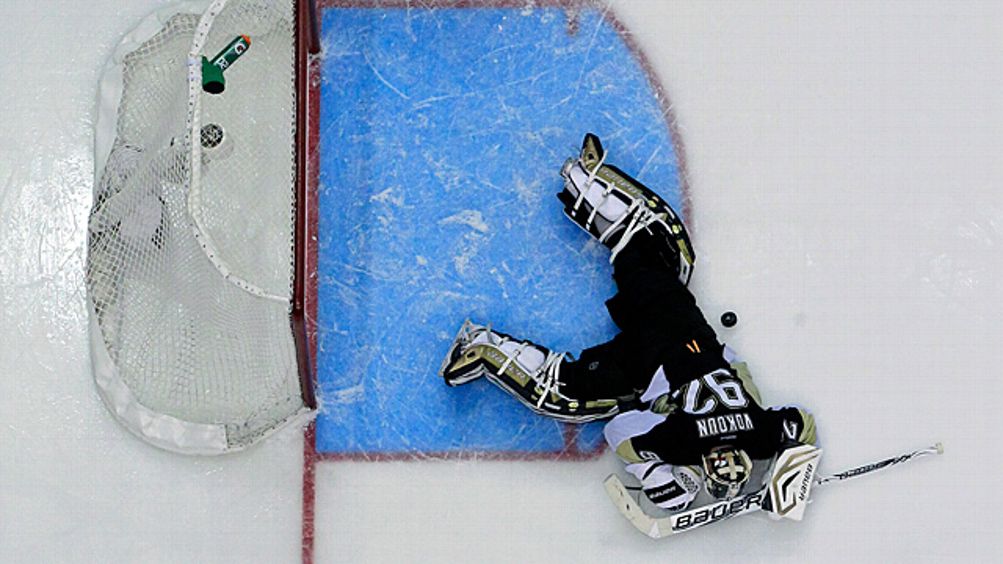 Once upon a time, I gave in to a fatal weakness for cliché and used the phrase “just like a Swiss watch” around someone who actually knew something about timepieces. The fellow shook his head. “You know what’s the thing about Swiss watches?” he asked. “They’re put together great, but if the littlest thing breaks down, the whole thing collapses.”

This is a team with two generational stars — Sidney Crosby and Evgeni Malkin — and all kinds of firepower, and, at the moment, more dog in its heart than you’ll find at Westminster. The first time anything goes wrong, and almost everything did in the first two conference finals games here in Pittsburgh, and their whole system goes completely to ruins. They lost 3-0 on Saturday night, and they simply gave away the third period. They didn’t wait that long Monday night. They gave away the entire game virtually right from the last notes of the national anthem.

You could see them come apart. With 28 seconds gone in Game 2, Crosby, who’s now played the worst two games he’s played since he was a Mite, or a Squirt, or a Paramecium, or whatever the lowest level of kiddie hockey is, bungled a play at the blue line. Barreling down a lane that would have accommodated Zambonis running three-wide, Brad Marchand whistled a shot past Tomas Vokoun, and the Bruins led 1-0. By the end of the period, Vokoun was long gone in favor of Marc-Andre Fleury. Pittsburgh finally scored on a lovely shot by Brandon Sutter with 34 seconds left in the period. The Penguins capitalized on this shift in momentum by disincorporating, surrendering another goal to Marchand with 8.1 seconds remaining, and trailing 4-1 at the first break. At which point, the 6-1 final was merely a matter of making sure the scoreboard clock worked properly.

But, as much easy fun as it is to mock the Penguins, and we will get around to it again, we can’t completely ignore the Bruins, who, since rolling the stone away in the seventh game against Toronto in the first round, have been brisk, businesslike, and completely dominant, both against the Rangers in Round 2, and now, in two games, against a team that was 22-3 during the regular season against teams that made the playoffs. Boston has outscored the Penguins 9-1 over the two games. Whenever Pittsburgh looked to be gathering itself, which never was often and never for long, Boston’s answer was immediate and decisive. When the Penguins finally scored their first goal of the series, late in the first period Monday night, the Bruins came right back and scored, 25 seconds later.

“That was the biggest goal of the night,” Bruins winger Milan Lucic said, “because they might have picked up the momentum there when they got that goal back, and to come right back and get another one the way we did was important.”

“We knew they were going to be a better team, and we had to be better than we were the last game in here,” said Boston coach Claude Julien. “So we didn’t have a better start anyways. And we got some good bounces to go our way, and because of that we were able to establish a lead and then we just kind of took it from there.”

More to the point, the Bruins simply look more solid and more durable, embodied best by Patrice Bergeron, a versatile, two-way center who got the fifth goal Monday night on a nifty pass from Jaromir Jagr, who played for the Penguins back when the world was young. “We’ve been relying on four lines all year and throughout the playoffs,” Bergeron said, “and the same thing right here. They have a lot of depth as well. So we need to make sure we’re ready for what we’re up against.” What they are up against is a Penguins team that now appears to be little more than a mismatched set of glittery parts, shiny shrapnel in a pile on the ice. 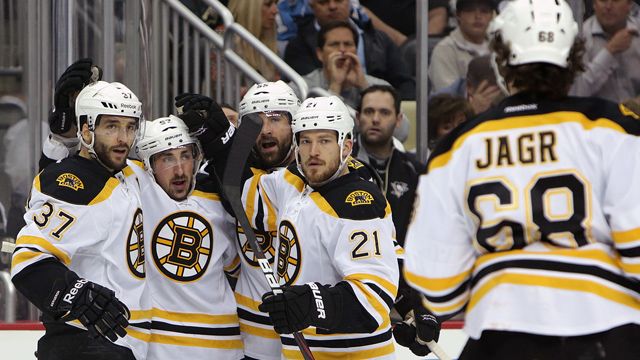 Not for nothing, but Crosby, for all of his importance to this league, is an enormously unlikable presence on the ice. He’s not a grand villain, like John Ferguson used to be on the great Canadien teams. He’s not an everlasting nuisance like Ken Linseman, and he’s not a reckless, vicious career-killer like Ulf Samuelsson. He’s not a cheap-shot thug like his teammate, Matt Cooke, who was asked to leave Game 1 early in the second period for running Adam McQuaid into the boards from behind. Crosby’s just kind of a punky pain in the ass, and he doesn’t need to be. He’s arguably the best player in the league, and certainly the best one in the series. Every time he gets hit, we get a German opera complete with Valkyrie maidens, and, completing the unlikable hockey double, he’s never committed a penalty of which he’s ever been aware. And what’s he doing in the first game, after the second period was over, shoving Boston goalie Tuukka Rask from behind, and then getting in Zdeno Chara’s face — or, more accurately, his collarbones — in response? That’s something you do if you’re a fourth-line center who’s trying to keep from getting sent back down to Kamloops.

“That’s the playoffs,” Crosby said, shrugging off the incident, but deftly digging one into the officials as he did. “If we score a couple of goals, we’re not talking about that. It’s tough. They’re letting a lot go out there. You can only control and channel that stuff so much but, keep letting guys do that stuff, they’re going to push the envelope. That’s something we obviously want to stay away from, but it’s kind of a natural thing when it gets like that.

“We didn’t play in a week and it was probably pretty emotional. But that’s not something we go out there looking for. That’s just kind of the result of the way the game escalated.”

Of course, it’s possible that Crosby was just aggravated by the dead-assed way the favored Penguins began the series. The Bruins beat them to every puck, especially in the third period, and the Pittsburgh defense was utterly exposed, demonstrating a degree of suckitude that made you wonder how they ever made the playoffs at all. All three Boston goals in the first game came as a direct result of some other Penguin making Vokoun’s life a living hell. On the first one, Paul Martin dropped to the ice in front of Vokoun about 11 minutes before David Krejci ever shot the puck. The second Boston goal came when Krejci got control of a popup inside the crease, and Kris Letang did Krejci the immeasurable favor of standing on Vokoun long enough for Krejci to pick his spot. And the final one happened because three Penguins chased Gregory Campbell along the boards, only to have Campbell skim a pass off Vokoun’s pads and right to Nathan Horton, who buried another easy one. The impression from the first game was not that Pittsburgh wasn’t better than the Bruins but, rather, that the Penguins had within them a certain imbalance between firepower and fire prevention that the Bruins could exploit.

“I felt great throughout the game,” Vokoun said Saturday. “Not much you can do on any of those goals. Sometimes you get breaks, sometimes you don’t, and today, the first deflected in and the second was a kind of a weird goal. Sometimes that happens … Today seems to me more like it was more up-and-down rush game, and we don’t want to play like that … It’s playoff conference finals, so we expect expect it to be hard and chippy.” You expect that, but it’s not always what you get. Sometimes, you come out for a playoff game and you get nothing at all. 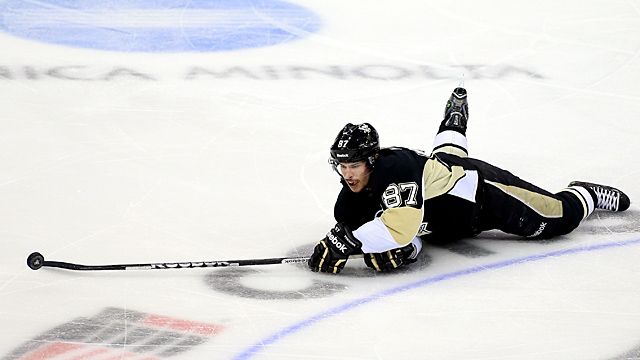 This team has won a lot of hockey games,” Pittsburgh coach Dan Bylsma said, after the ritual slaughter finally came to an end Monday. “It’s a good team. We’ve won 15 in a row. And we won seven in a row and five in a row, and we certainly didn’t play anywhere near where we’re capable of. And that’s gotta be our focus, to get our first win in Game 3 in Boston.”

They are a good team. They might even be a great team. But they are not a good team — let alone a great one — against this particular opponent at this particular time. Boston played just a little bit better than average in the first game, and they shut out the Penguins. They played very well in the second game and they simply rolled them. At least at this point, the series looks like a horses-for-courses proposition. Some teams are simply suited to beat other teams. The strengths and weaknesses align perfectly. The unspectacular Boston Bruins seem in every way, but especially in their ability to use their entire roster to its full advantage, to match up perfectly against the Pittsburgh Penguins, who are top-heavy with stars, shaky in goal, porous defensively, and, at the moment, the very living, walking, skating definition of a front-running show pony. And that is not the horse for this course. You time such things with a battered tin stopwatch. Drop it, and it keeps running anyway.