Are we seeing the decline of the Colts? 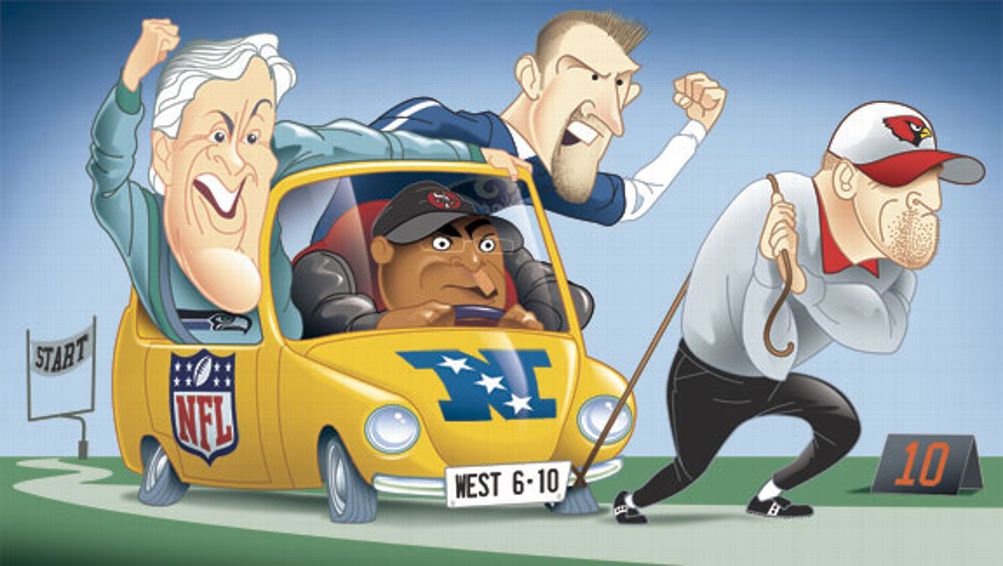 When I was falling in love with football in the mid-’70s, my beloved Patriots played in the AFC East. There were 28 teams and six divisions by 1976, which meant one division in each league had just four teams instead of five. Teams earned a playoff spot by winning their division or grabbing the one wild-card slot, which eliminated the ’77 Pats: they finished 9-5, one game behind division rivals Miami and Baltimore. Meanwhile, the AFC Central shook out like this:

I remember bristling at the standings. Wait a second. We finished 9-5 and the Steelers finished 9-5. We were in a more difficult division with more teams. But THEY made the playoffs??? This would have been my most traumatic moment of 1977 if Farrah Fawcett-Majors hadn’t left “Charlie’s Angels.” I haven’t trusted the NFL’s divisional setup since.

Granted, I probably would have loved it had the Patriots not been stuck in the AFC East. The Dolphins kicked our butts through the ’70s (the Griese/Shula Era) and ’80s (when Dan Marino showed up), which was especially galling because Miami is located in Florida … which, of course, is nowhere near Massachusetts. Buffalo eventually assumed control of the division, ripping off 124 wins from 1988 to 1999 — let’s take a break while the tortured Bills fans solemnly pour a 40 on the ground — and just as they were fading, Peyton Manning’s Colts jelled into a contender. My Pats finally caught a break before the 2002 season, when the league expanded and realigned to eight divisions (sending Indy to the AFC South). The playing field finally seemed fair: 32 teams, four teams per division. What could go wrong?

Fast-forward to 2010: Have you checked out the NFC West lately?

I know, it isn’t exactly stunning when the NFC West Albatross drags down another NFL season. Since 2002, that division has been like Lt. Stephanie Holden on “Baywatch” — unable to measure up to everyone else no matter how hard the producers kept pushing it (see sidebar). But this season is particularly rancid even by NFC West standards. By my calculations, San Francisco (I have them ranked 23rd), Seattle (25th), Arizona (27th) and St. Louis (30th) are four of the league’s worst 10 teams. So far, their only victories have come against one another. A closer look:

Seahawks (1-1): Won nine games total in 2008 and 2009, overpaid a college coach, gutted their team and somehow ended up with the league’s fifth-highest payroll ($138.8 million). Throw in a general Washington sports malaise — the Mariners might lose 100 games, the Zombie Sonics look like a title contender, Kevin Durant flashed GOAT potential in Turkey, the Jake Locker Heisman Bandwagon careened off I-5 and flipped 35 times and the state’s two biggest sports highlights of the past three years involved the WNBA and MLS — and it’s hard to imagine the Hawks winning more than six games.

You can’t overstate how devastating the Sonics/Durant double whammy has been for Seattle fans. After my gushing Durant column last week, my former editor KJ, a lifelong Sonics die-hard, sent me an e-mail that simply read, “Cue up Eddie Vedder: ‘I know someday you’ll have a beautiful life, I know you’ll be a sun in somebody else’s sky, but why can’t it be mine?'” Any time sports drives a fan to quote “Black,” the single most depressing song by a Seattle band other than “Black Hole Sun,” you know something truly hideous has happened.

Cardinals (1-1): Their star quarterback ditched them for “Dancing With the Stars,” murdering their offense, sending Larry Fitzgerald into therapy (I’m guessing) and leading to last week’s humiliating trouncing in Atlanta; after cruising to a 41-7 lead, the Falcons took mercy with a few minutes to go by having Matt Ryan kneel four times inside Arizona’s 10. And yes, we’re three-fourths of the way through the division.

(Quick tangent: Kurt Warner’s new TV career led to the funniest subplot of the 2010 season, when Cardinals fans subjected themselves to “Dancing With the Stars” and prayed that Warner would be the worst star — that way, he’d get voted off first and might get talked into a comeback — only Margaret Cho, David Hasselhoff and The Situation were significantly more inept, leading to an unexpected scenario in which red-blooded football fans were complaining about things like: “I can’t believe Margaret Cho wore that outfit, it killed her!” and “Really, The Situation couldn’t have found more than five days in his busy schedule of showing off his abs at nightclubs to practice his routine?”)

Niners (0-2): Even though they lost 66 of their past 99 games and haven’t topped .500 since 2002, everyone assumed they’d win this wretched division by default until Seattle improbably whupped them in Week 1, then the Niners choked on Monday night against a Saints team that seemed genuinely uninterested until the final 90 seconds. Although Vegas still gives it the best NFC West odds (-120), San Fran’s next two games are in Kansas City and Atlanta — and by the way, only one 0-4 team has ever made the playoffs — and the Niners have road games in Green Bay (Week 13) and San Diego (Week 15) coming later.

Could the Niners finish 8-8 or 9-7? Of course. Their remaining home games: Philly, Oakland, Denver, St. Louis, Tampa Bay, Seattle and Arizona. That’s seven non-playoff teams unless Tampa is for real. (Which isn’t as impossible as it sounds. These past two weeks, Josh Freeman looked like a young Ben Roethlisberger with faster legs: impossible to take down and consistently able to extend plays. And no, I can’t believe I just wrote that, either.) We may end up considering San Fran’s 0-2 start an unfortunate hiccup. Then again, that scenario includes the Niners growing up into a real football team, which seems unlikely after what happened Monday night: It wasn’t just the turnovers (four) or the coaching (disjointed as always), but the lame excuses that followed. Sure, these excuses weren’t as ridiculous as Buffalo coach Chan Gailey telling reporters this week, “We can be a good football team, but we’re not right now, and we have to get there … it’s taking longer than I hoped it would.” (Wait, what?) But they were still pretty bad.

Frank Gore: “We whupped their behind up and down the field. They can’t stand up with us. And we beat ourselves for the second week in a row. We’ve got to change that.”

Sorry, fellas — that’s like Lindsay Lohan saying, “When I stop doing cocaine, sleeping with strangers and spending time in jail, I’m gonna make good movies again!” Being a quality football team means not making mistakes and not beating yourself. Period. I don’t trust the 2010 San Francisco 49ers even a little. By process of elimination, that leaves …

You know what that means? We might make history in two ways:

1. The 2010 NFC West could break the record for “fewest wins by a four-team division” (22 wins, previously held by the 2008 NFC West) and “lowest average wins per division team in NFL history” (5.5, also held by the NFC West). How pathetic would that be? Breaking your own record of historic incompetence?

Here’s my question: Why create the potential of a 10-win team missing the playoffs just because we were obligated to include a sub-.500 team? The easiest solution: Any division champ that doesn’t win eight games loses its guaranteed playoff spot. If you go 7-8-1, 7-7-2, 7-6-3, 6-6-4, whatever … you’re out. I want eight victories. Minimum. Then again, you shouldn’t sneak into the playoffs with eight wins just because you lucked out with a crappy division. The NFC West has lost 58 percent of its games since 2002. Fifty-eight percent! Why should the division champ be grandfathered in every year like some drunk legacy kid at a country club?

A more radical (and fairer) solution: We shake things up starting in 2011 and create four eight-team divisions …

Geographically? Makes total sense. Finally. (Is there anything dumber than Baltimore being in the AFC Central but Miami being in the AFC East?) Competitively, since the owners are stupidly/stubbornly/indefensibly/greedily/soullessly/selfishly pushing for an 18-game regular season and will inevitably prevail (sadly, there’s no real way to stop them even as their sport inches closer and closer to that final scene of “Rollerball”), we change the schedule’s requirements so teams play home-and-homes with three of their division rivals every season (never the same three teams); they play the other four division rivals once; they play four teams from the other division in their conference; then they play four teams from the other conference. That’s 18 games … and tons of collateral damage. But, hey, who cares about the health, happiness and well-being of retired football players?

For my revamped playoffs, the four division champs would earn byes for Round 1. Everything else would play out like it does now: 12 playoff teams, four rounds, winner takes all. And we’d never have to worry about a sub-.500 team getting 10-plus points at home in a first-round playoff game ever again.

(On second thought, it would be kinda fun to wager against Alex Smith or Derek Anderson in a playoff game.)

(Especially in a two-team teaser.)

(Forget I brought this up.)