The Prisoner of Redemption 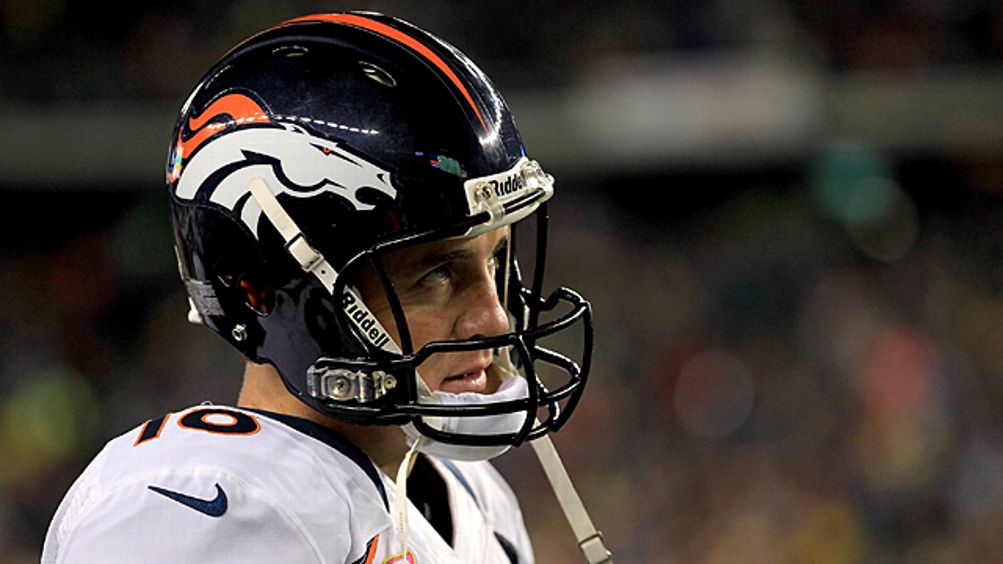 They don’t even really see the moment coming until it is upon them. Suddenly, after age or an injury or a simple change in latitude disrupts a career, the elite athlete discovers one day that everything he once depended upon is gone. Pop a knee, and that acceleration that got you from Godforsaken Regional High School to East Copperhead Junior College to Megalith LLC University to the NFL isn’t there anymore. Change where you play, and maybe that bailout tight end, or the guard who always had your blind side, isn’t around, and somebody beats the teammate, the guy whose name you might not know yet, to the outside and then sits on your head. The game goes beyond your control in dozens of small and unfathomable ways. Suddenly, you are dependent upon the competence of strangers.

There was a moment like that early Sunday evening in Foxborough. Peyton Manning — the quarterback of the Denver Broncos and the erstwhile star quarterback of the Indianapolis Colts — was on the ground, put there by New England’s Rob Ninkovich and kept there by Chandler Jones. The ball was on the ground, too, but the ball was on the ground in a different place, and that became an immediate problem for Manning, who was on the ground, having been put there by Ninkovich. Vince Wilfork was now on top of the ball as securely as Jones was on top of Manning. The ballgame also had spun out of reach. A couple of plays later, Stevan Ridley, the New England running back, bounced into the end zone over the left side, and after the extra point the Patriots took a 31-7 lead. That the Broncos were able to make a game of it, losing 31-21, after squandering a golden chance to make things even closer than that, was a testimony to Manning’s innate ability to move a football team down the field, even if at times he did look like a man trying to navigate his way across a landscape on which all the road signs suddenly were written in Swedish.

“It’s not easy,” he said later. “It is a transition, and it is something you have to go through. I mean, I’ve been here a number of times under different circumstances. I can probably give you a better read on that later on in the season.”

In fact, Manning was as good as he had to be Sunday, completing 31 of 44 passes for 345 yards and three touchdowns. At times, he looked as sharp as he ever did in Indianapolis. But the tone for the day was set on the very first possession of the game. He hit three passes in a row, and even ran for 10 yards and a first down on a third-and-5 play from his own 42-yard line. Three plays after that, he found wideout Demaryius Thomas five yards behind Sterling Moore and hit him with a gorgeous 43-yard pass down the seam in the middle of the field, only to have Moore punch the ball free from behind and fall on it. “You get a chance on the road to put up points, get the crowd settled down, and you have to do that,” Manning said. The competence of strangers.

It wasn’t always like this. Everything about the game took place within this strange new normal. It used to be that Indianapolis–New England was the finest rivalry in the league, and that even predated the arrival of the two quarterbacks, since it was Bill Parcells who had the New England secondary start roughing up the Indianapolis receivers, causing Bill Polian to turn the Dudgeonmeter up to 11. Once Manning and Brady arrived, one of the league’s great rivalries found itself infused with the battle of the network stars. Not only did their careers roughly parallel each other, but they both had distinct roles to play. Manning was the golden child, the second-generation star marked almost from birth to be one, while Brady was the sixth-round draft pick out of Michigan who got a start only because Mo Lewis nearly killed Drew Bledsoe on the field. For a while, Brady’s three Super Bowls trumped Manning’s gaudy statistics, until Manning won a Super Bowl of his own, beating Brady and the Patriots along the way to it.

(Of course, the wonderfully ironic historical anomaly is that, as far as the Super Bowl is concerned, Brady’s greatest nemesis has been the younger Manning, Eli, and the New York Giants.)

Along the way, though, they both became as battered as quarterbacks will be. Brady lost an entire season to a knee injury that required surgery, and Manning lost an entire season to a dangerous neck injury that required surgery, which probably made it easier for Indianapolis to let him go. When he got to Denver, he was still dogged by questions of whether or not it was healthy for him to play football at all. After all, the oldest Manning son, Cooper, had his own football career cut short because of a congenital deformation of his upper spinal column. Peyton Manning arrived at Broncos training camp with a good portion of people believing that he was over the hill, and another portion of people believing that he simply was crazy to play.

“I’ve spoken to Peyton a couple of times since the surgery,” Brady said last week. “I’m sure that his love for competition exceeds whatever pain he might feel, but I haven’t really talked to him about that. I know what he’s feeling, though. I lost a whole year and it’s difficult to come back. You get so rusty.” 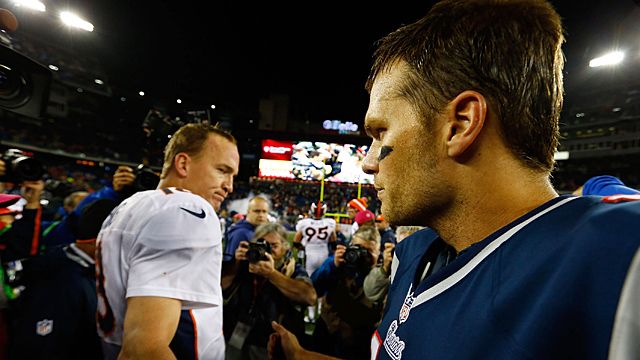 But the sizzle has gone from the rivalry, at least in part because the immediacy of it has gone. Indianapolis and New England used to play not only every season, but also every postseason. Now, while Denver and New England have a rivalry that goes back to Abner Haynes sprinting out of the corral through the long shadows of Mile High Stadium, you can’t simply transplant Brady and Manning into that context. The feel is all wrong. Something’s come loose in the cosmos. And then you have a game like the one Sunday, which New England won at least partly because Brady has so many things around him upon which he can rely, while Manning is still feeling his way through his new job and his new teammates, and something seems a little unfair. You could see it on the several occasions in which Denver had a real chance to get back in the game, until there came a moment in which it simply didn’t matter anymore.

After the fumble that Ridley had turned into that big New England lead, it was the Patriots who began to spit the bit. Manning brought the Broncos right back down the field over 10 plays, including a 38-yard pass to Thomas down the left sideline, and cut the gap right back to 31-14. The Denver defense got stout at the beginning of the fourth quarter, shutting down New England and, with 8:17 left, stuffing an inexplicable fourth-down try by the Patriots at the Denver 37. This turned the ball back over to Manning, who got them back to 31-21 six plays later, hitting Brandon Stokley from five yards out. And then, with 5:19 to play, Ridley fumbled the ball back to Denver and Manning got a chance to put a real edge on things.

He found Jacob Tamme for 17 yards and then, two incompletions later, Thomas again for nine yards on a third-and-10. Facing a fourth-and-1 from the New England 42-yard line, Manning reached back to 2004, throwing a risky deep ball down the right sideline for which Thomas had to come back about two yards, having turned Patriots cornerback Devin McCourty completely around. It was the kind of play he once made to Marvin Harrison, or to Pierre Garcon, or to any member of that receiving corps that Indianapolis had so carefully built around him. Given a chance to cut the New England lead to a shaky three points, and with the New England secondary completely bumfuzzled, Manning missed on a pass and then sent Willis McGahee up the middle. Ninkovich blew up the play and popped the ball loose. Jermaine Cunningham fell on it, and Manning stood alone on the field for just the briefest moment, popping his chin strap loose in the unmistakable gesture of every quarterback who ever has had to depend on the competence of strangers. Which is, of course, eventually, all of them.

“I told Demaryius that I would stand with him, and I told Willis after he fumbled that I would stand with him, too,” Manning said after the game. “What happened today doesn’t mean that Demaryius isn’t going to get the ball, or that I’m going to stop calling Willis’s number. Nobody wants to be the guy who has a play go against them like that. As a teammate, and as a quarterback, I’m with them.

“I think we’re building something here, and it doesn’t happen right away. There are things and goals we’re trying to get to, and the only way to get to them is to play games, to see together the different situations and scenarios that occur during games, and to see them together.” With that, Peyton Manning, the 36-year-old quarterback of the rebuilding Denver Broncos, headed for the bus that would take him to the airport that would take him back to the still-new place where he likely will finish out his career. Some days, it seems like everything — the ball, the game, the years — is getting away all at once.