Welcome to the mock draft 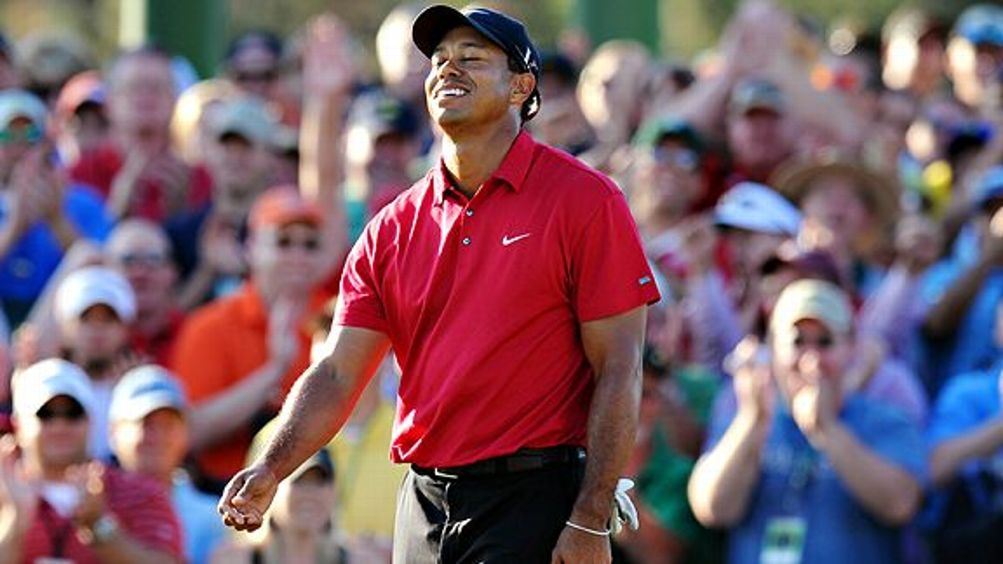 I had three favorite moments from the 2010 Masters. All of them happened within 20 minutes.

The first: After Tiger birdied the 72nd hole, Jim Nantz said that Tiger had “somehow managed a 69 out of all of this,” followed by me giggling like Beavis and Butt-Head for the next 30 seconds. Tiger’s week at Augusta couldn’t have ended any other way.

The second: After Phil Mickelson’s winning putt, when he was hugging his cancer-stricken wife and both of them were crying, I glanced over to the Sports Gal — the same person who once cried during a 30-second Michael Jordan commercial — and, of course, she was crying, only she decided to sum up her feelings by saying, “I hate Tiger Woods.”

The third: Ten minutes after the tournament ended, Masters chairman Billy Payne hopped off his high horse, stood in front of the fireplace at Butler Cabin and greeted the CBS audience. I always find myself ignoring whatever he’s saying and staring instead at the cabin, which looks like it was hastily put together by “Saturday Night Live” set designers between commercials after the final putt. Over the fireplace (which never has a fire going), sandwiched between bouquets of red azaleas, there’s a color portrait of a golfer from the 1930s or 1940s (I think it’s Bobby Jones) finishing a swing while wearing a hot yellow sweater. You can also kind of see a plant. And there’s a beige door over Payne’s left shoulder. It’s one of the least interesting cabins ever.

And yet, the cabin always turns Nantz to jello. This year, Payne made his opening remarks and brought in his “good friend Jim Nantz,” who came in sheepishly for a handshake. Payne congratulated him on a “great week and a wonderful, wonderful 25 years” while continuing the handshake, then putting his left hand on Nantz’s hand for an emotional two-handed handshake. Nantz immediately responded by putting his left hand on Payne’s right arm and said, “I appreciate that, what a day this was,” and for a second, I thought they were going to start making out. Which, by the way, would have been awesome.

They both pulled away, then Nantz stepped back passively to let Payne finish his presentation. Nantz bowed his head, sank his shoulders and glanced around like he had never been on television before. He couldn’t have been more uncomfortable. Again, this is Jim Nantz! He’s been on television for three decades! He’s done Super Bowls, March Madness title games, golf majors, you name it. And he was so overwhelmed by Butler Cabin that he couldn’t even figure out how to stand in place for 15 seconds?

From there, Payne and Nantz awkwardly interviewed Matteo Manassero (the top amateur this year), Mickelson (our 2010 champion) and Angel Cabrera (our 2009 champion). Everyone sat stiffly and spoke in hushed voices. Nantz got to bang out his “win one for the family” line again, which he definitely came up with in his hotel room Saturday night at 3 in the morning after testing out 20 other candidates. Then, Cabrera helped Mickelson put on his jacket, followed by Payne coming in for a second two-handed handshake and CBS immediately cutting to an inspiring montage of this year’s tournament — highlighted by Nantz gushing, “Green has always been the primary color at Augusta, but today, it was imbued in pink!” — followed by a live cut back to Mickelson smiling into the camera and everyone in the Butler Cabin applauding.

Those five minutes captured the Masters to a tee. It’s contrived and corny. It has social interactions that you will never see anywhere else. It has its own music — just a few strands of acoustic guitar that sounds like something you’d hear while getting a massage. It has no relation to any other sporting event, or really, anything about sports other than the part in which athletes are competing for something. Like Richard in “Lost,” Jon Gruden or Coach K, it never seems to age or change in any way. Augusta intentionally positions itself as a cocoon, a well-preserved time capsule that preserves the good old days — you know, before sports became commercialized, before Title IX, before DirecTV season passes, before the Internet, before everything — when rich white guys could play golf without having to deal with anything else.

In 2010, networks, agents and superstars have all the power in sports. Nobody else really matters. Augusta flips that around. They make it very clear to everyone. We hold the cards. Not you. Us. For one week a year, you will play by OUR rules. Augusta might be the only sports monolith left that doesn’t totally care about money. Imagine how much they could have generated last week with an “all-access” package allowing viewers to watch every hole for $79.95? They didn’t care. Left that money on the table. Didn’t need it. Name me another league, tournament, agent, network or athlete in 2010 that walks away from money. You can’t.

By the way, I hate Augusta for this. It’s unbelievable that in this current era of sports — when I can watch a mundane Red Sox-Royals game on my BlackBerry while sitting at a stoplight in Manhattan Beach — I couldn’t watch 60 percent of the holes played on Thursday and Friday by Tiger Woods. I should be able to see anything I want in 2010. Just name me a price and let me decide whether I want to pay it. Augusta doesn’t care. I can go screw myself. That’s their attitude.

You’re lucky you get to watch this tournament at all.

They limit the television coverage, limit the number of tickets and make it clear that everyone should behave in a certain way: golfers, announcers, fans, writers, everybody. When Payne gave his withering critique of Tiger’s shortcomings on Wednesday, the general reaction was, “I can’t believe he said that.”

Are you kidding? Of course he was going to say that! That was an alpha dog move. That was Billy Payne reminding everyone who wears the pants in the family. He trampled Tiger Woods with his high horse and left him for dead. It was unbelievable. Even David Stern, at the height of his hubris, never would have called out his biggest superstar that blatantly. Payne didn’t care. And why? Because Tiger Woods needs Augusta more than Augusta needs Tiger. You cannot finish your career as the greatest golfer who ever lived if you stopped playing Augusta at 34 years old. Tiger knows this. So does Payne. If it came down to a pissing match, Payne was going to win. He wanted to make sure everyone remembered this.

Still, it was a mean-spirited moment, someone being a bully just for the sake of being a bully. You could choke on the hypocrisy of the Masters chairman — a tournament played at a club that doesn’t allow women members — bristling because he didn’t like the way someone treated women. Some writers called him out on this last week, and rightfully so. Payne didn’t care. He proved his point. The Masters belonged to a different era. It didn’t want any part of this one.

Who knew this better than anyone? Tiger Woods. I feel like a fool for not seeing it sooner. During the weeks leading up to his return, like so many others, I wondered how he would handle heckling, tepid applause, sarcastic whispers, booing and everything else. I forgot how well they controlled galleries at Augusta, how they can track every ticket that’s given out, how — assuming a fan crosses the line and gets bounced from the tournament — you lose your tickets forever (or, you lose them forever for the person who gave them to you).

For someone who made so many stupid decisions over these past four-plus months, it’s mildly amazing that Tiger nailed this one. The galleries cheered him for four straight days. He quickly evolved into something of a sentimental hero — or at least, that’s what it felt like — and when a plane flew overhead on Thursday mocking him with sarcastic banners, it almost felt like dirty pool.

With the pressure of ridicule removed, Tiger was free to concentrate on three tasks: shaking the rust off his game, curtailing his impulse to swear after bad shots and proving to everyone that this was a newer, gentler, happier Tiger. Given that golf is such a naked sport — you can see every emotion, every frown, every grimace and every thought bubble — watching Tiger in HD was almost like watching an actor play a role. I kept waiting for a director to pop out and say, “Tiger, you’re about to make an eagle here, no fist pumps here, just raise your arms up awkwardly and have a good laugh about it … and … ACTION!”

He did better than I expected, that’s for sure. Finished fourth despite hitting the ball erratically all week. Avoided any awkward news conference moments. Never embarrassed himself, never was really embarrassed … unless you count Payne’s remarks, or the tasteless (and much mocked) Nike ad that capitalized on his dead father’s memory. As Nantz was complimenting his 69 on Sunday, it seemed like Tiger would escape Augusta relatively unscathed. Then the Mickelsons hugged for about 30 seconds, tears flowing, as we choked on the symbolism.

Payne couldn’t have scripted it any better. Instead of a disgraced adulterer winning with his wife nowhere to be seen, the tournament ended with a married couple hugging. Perfect. Right out of the 1950s. Just like Augusta. The bubble remained secure.

Unfortunately for Woods, it’s time to leave that bubble and join 2010 again. It’s a world that may include drunken hecklers, catcalls, fans taking photos during his swing, more airplane banners, TMZ cameramen, unsubstantiated rumors and media troublemakers starting trouble just for sport. It’s a world where my wife watches two people hugging and hates Tiger Woods because of it. It’s a world where, if he slips and drops an F-bomb during a tournament, the moment will be replayed again and again. It’s a world where Phil Mickelson is now the most popular golfer in the world, hands down, nobody else coming close.

In 1973, everyone wondered if Ali’s apex had come and gone … then he rallied and beat Foreman in Zaire the next year. In 1995, everyone wondered if Jordan’s apex had come and gone after the Orlando series … then he rallied and won three straight titles. Now we’re wondering about Tiger. Can a transcendent athlete fundamentally change his character while maintaining the same level of superiority? By softening as a person, will that soften him as a golfer? How much of the past few weeks was saving-my-brand rhetoric and how much was genuine?

He’s trying to rebuild his game, family and brand. Those three goals seem to be in constant conflict. He cannot dominate at golf if he’s spending too much time with his family. He cannot save his family if he’s playing too much golf. He cannot salvage a damaged brand without saving his marriage and winning tournaments again. Rock, paper, scissors. Tiger Woods may have come back at Augusta, but the comeback starts now.