We Went There: Thoughts From Miami 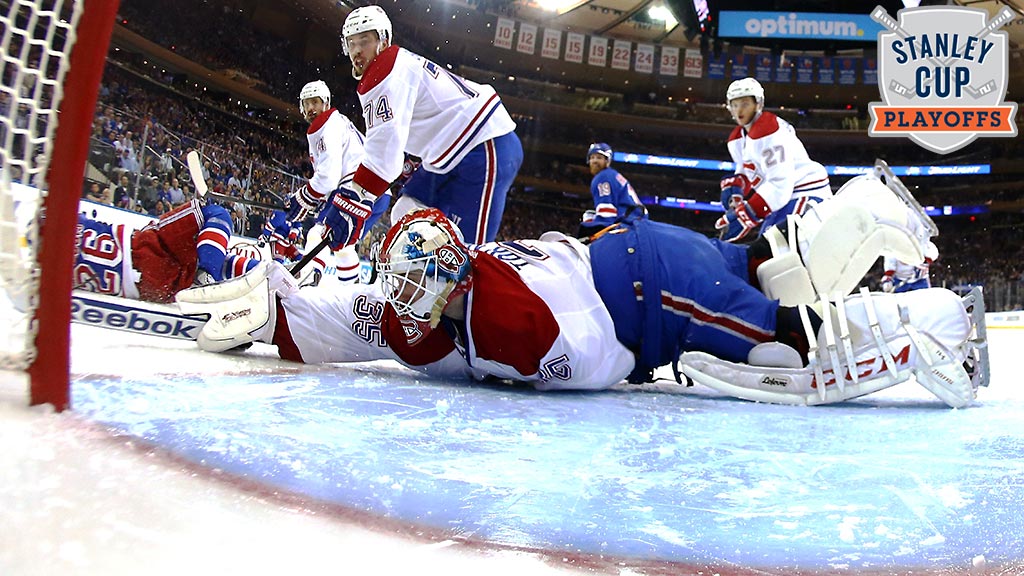 The goalie stands at the other end of the ice and sees the play develop. Deep down the boards to his left there is a scramble, a turbulent cloud of movement, white and blue jerseys colliding, merging, the puck lost in the brief tempest and then found again. It slips out, and one of the goalie’s teammates finds it. He slides the puck on a long diagonal to a shooter, who is waiting just inside the faceoff circle to the right. He sees the opening, high to the corner. The goalie does not think like a goalie now, how he might move to stop the shot he knows will come. He sees the opening and, in his mind, the goalie becomes a teammate. The goalie becomes the shooter.

“In that situation,” Henrik Lundqvist said, “I’m in Marty’s head. I’m wondering what he sees and what he’s thinking. You try to be calm about it, and try to be in the right place mentally — but, playing OT in the conference final, of course you’re going to be on edge. To see that play develop, and to see him getting that much time, you just hope for a great shot … and we got it.”

Lundqvist and the New York Rangers play tonight in Montreal in the fifth game of an Eastern Conference final series that is getting more fascinating the closer it comes to what appears to be its inevitable conclusion. When Martin St. Louis buried the shot that Lundqvist saw from the other end of the ice, he gave the Rangers a 3-2 win and a 3-1 lead overall. The game itself was the finest of the series. The Rangers took the first two in the Bell Centre, as Montreal seemed to have left everything on the ice over the seven contests it took them to upset the Boston Bruins. Then, in the third game, the Canadiens pretty much broke the needle on the bonne chance meter, bouncing three shots off their own players and past Lundqvist, the last coming in overtime, when Tomas Plekanec one-hopped a shot off Alex Galchenyuk.

The series already had its chippy eccentricities on display. In the first game, New York’s Chris Kreider crushed Canadien goalie Carey Price, injuring Price’s knee and taking him out of the series. But last Saturday, things jumped the rails entirely. It all began when Montreal coach Michel Therrien questioned the severity of the injury suffered by New York’s Derick Brassard, and said, “We expect Derick Brassard to play and we know exactly where he’s injured.” Vigneault responded with “Let’s put it this way: I hope nothing happens to Brass. The player, and Michel, could be in trouble.” Then some Canadiens even expressed doubts about the condition of New York’s Derek Stepan, and he was in the hospital having his jaw reconstructed at the time. “I can’t comment on their players saying Step’s injury is fishy,” said Vigneault, by way of commenting on their players saying Step’s injury was fishy. The last in this series of straws came when two Rangers assistants were summarily ejected from a Montreal practice. This caused an outbreak of outraged Québécois at a subsequent press conference in which the curious English idiom “Spygate” kept popping up.

“There is always a gentlemen’s agreement between two teams and the general manager that coaches are not allowed to attend practices between games,” Therrien said of his decision to bounce the New York coaches. “Game day is different. So, when we saw those assistant coaches there, they were not supposed to be there, so we let them know.”

“Well, we were treated very unfairly yesterday,” Vigneault fumed. “There is no rule. There was no agreement between both teams. What happened [Saturday] was uncalled for. I wish a lot of this stuff didn’t happen. When it does, you deal with it. I don’t think it has a major effect, if any, on the ice. I don’t think it helps our game, but some people decide otherwise.”

Hockey historians will note that one of the New York coaches given the heave-ho was Ulf Samuelsson, a career button man on the ice who now may be trying to establish a reputation as goon emeritus on the Rangers staff.

Burlesque ill feeling is as much a part of Stanley Cup playoff hockey as are Doc Emrick and the phonies in the luxury suites, but a truly great Stanley Cup series mixes this oddly Canadian performance art with superb play. If we’re lucky, every series in every sport lasts long enough to develop a personality of its own. Each series is a separate production, with its own heroes and its own villains, and its own dramatic twists in the plot. After Montreal dispatched the Bruins, for example, the hockey world went agog when Boston’s Milan Lucic threatened a couple of Canadiens while going through the line for the traditional end-of-series handshake. (Don Cherry, because he is Don Cherry and therefore a dolt, blamed Montreal’s Andrei Markov for the whole thing.) This was briefly A Thing. And then they dropped the puck for the first game between the Rangers and the Canadiens, and nobody thought of Milan Lucic again. He might as well have played with Eddie Shore for all that mattered.

The problem with this series is that the Rangers grabbed it by the throat in the first two games and, since their win on Sunday, things have looked very close to being over just as they were starting to get interesting. Both coaches are lifers, and their paths have crossed more than once. In 2000, the Canadiens fired Vigneault and replaced him with Therrien, who later went on to coach in Pittsburgh, where, in 2006, one of his postgame arias made him a YouTube sensation. Meanwhile, Vigneault, after a stop in Vancouver, is in his first year in New York. Both coaches are afflicted with their own unique brands of pressure; Therrien has the ghosts of more than a century looking over his shoulder, while Vigneault has two tabloid newspapers looking over his.

And their teams arrived at the current series each having won taut seven-game sets in the second round, with the Rangers beating the Penguins and the Canadiens shuffling Boston off to early tee times. But it has been interesting to watch the reactions of both squads. The Rangers came out energized by their defeat of Pittsburgh, storming into Montreal with obvious momentum. On the other hand, the Canadiens, even before Price’s injury — which occurred in a game in which the Canadiens gave up seven goals — seemed to have justified their season to themselves simply by beating their ancient rivals, and doing so stubbornly, coming back from a 3-2 deficit.

Then, of course, there came the sniping and the snarling and the general overall zut alors–ing, to say nothing of the covert operations undertaken by Ulf Samuelsson, International Man of Groin Shots, that livened up Saturday’s off-day practices. On Sunday night, before the game, a camera crew caught Therrien jiving with Vigneault as the latter arrived at Madison Square Garden. Both of them seemed quite jovial. A great playoff hockey series is always a theater of the absurd and, with any luck at all, this one won’t close until one or both of them hugs or punches the other. This is a show that likely will not go on, but should, if God is half the dramatist the Old Testament makes Him out to be.

This column has been updated to correct factual errors.