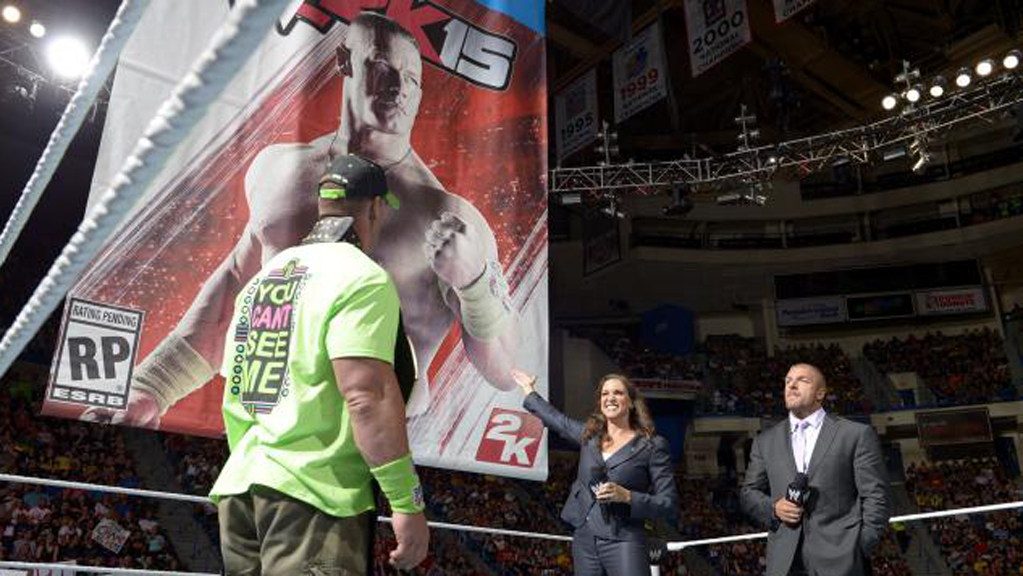 Monday night, Raw opened with nefarious execs Triple H and Stephanie McMahon welcoming John Cena to the ring to commemorate his 15th WWE championship reign. Cena had claimed the belt in his trademark inevitable fashion by shrugging off the other seven competitors in Sunday’s WWE World Heavyweight Championship match. The power couple greeted him with unusual grace — they always knew he was an A-plus player, they said, unlike his diminutive predecessor, Daniel Bryan.1 Cena, disinclined to accept their sardonic praise, went positively stone-faced when they unveiled the cover of the new WWE video game — WWE 2K15 — emblazoned with Cena’s statuesque frame. Maybe he felt he was being played, and certainly that was part of it. But maybe someone of Cena’s tenure in professional wrestling realized that something more perverse was afoot.

Every sports fan knows about the Madden Curse — the misfortune that inexorably visits the NFL player chosen to grace the cover of that year’s edition of the Madden video game. But less known, even within the insular world of pro wrestling fandom, is that a similar curse has befallen a frightening number of WWE stars who have been enshrined in video games over the years. Numerous wrestlers have faced injury or — even worse in the wrestling world — disappeared entirely from the ring. Let’s examine the rundown of misfortune.

WWF’s inaugural digital effort came in the more innocent days of the Hulkamania Era. WWF WrestleMania was released for the Nintendo Entertainment System in January 1989, with Hulk Hogan unsurprisingly appearing on its cover. The next month, the Mega Powers split on Saturday Night’s Main Event. Sure, that was scripted, but 11-year-old me couldn’t have been more shaken. And it set the stage for a litany of real-life catastrophe that would follow. 1992’s WWF Super WrestleMania once again featured Hogan on the cover (with Sid, the Legion of Doom, Savage, and Jake the Snake in the SNES version and Savage, Ultimate Warrior, DiBiase, and Papa Shango on the Sega version — in both, Hogan was the prominent figure).2 Shortly after the game’s release, news reports started popping up about Dr. George Zahorian, the attending physician for wrestling bouts for the Pennsylvania State Athletic Commission, illegally selling steroids to Hogan and other wrestlers. Hogan would take a leave of absence from WWF in the ensuing uproar.

WWE SmackDown! Here Comes the Pain came out on October 27, 2003, with Brock Lesnar on the cover. Four and a half months later, Lesnar ditched the WWE to try out for the Minnesota Vikings (and later try his hand at MMA).3 His last match was the notorious WrestleMania XX affair with Goldberg that saw both men rowdily booed by a disapproving crowd. Late the following year, WWE SmackDown! vs. Raw came out. For this package, WWE made the slightly odd decision to put company owner Vince McMahon on the cover; if it were a canny means of avoiding the Curse, it didn’t work. On January 30, 2005, McMahon somehow tore both his quads while entering the ring during the Royal Rumble. WWE SmackDown vs. Raw 2007 came out in November 2006. The cover boy was Triple H. A little more than a month afterward, at New Year’s Revolution, Triple H tore his right quadriceps while delivering a spinebuster to Randy Orton. The match ended in a no-contest, and Triple H was out of action for months.

WWE changed the naming system for its games in 2011 after the Raw–SmackDown brand split, but the chain of misfortune didn’t end. WWE ’12 came out at the end of 2011 and featured Orton on the box. Six months later, Orton would get his second drug-related suspension under the WWE wellness policy; a third strike meant he would be fired, so the second indicated that WWE’s power brokers would be unlikely to trust him with future headlining roles. (WWE later amended the policy to allow for strikes to be removed after a period of compliance; this statute is known as “the Orton Rule,” as it was seemingly drafted with him in mind, and as such resuscitated his career.) WWE ’13 was emblazoned with a portrait of CM Punk, who walked out on WWE early this year for reasons still not fully known. WWE 2K14 featured the Rock; he has since returned to the greener pastures of Hollywood, and his rumored return for this year’s WrestleMania 30 didn’t lead to an actual match.

Which brings us to the present — to John Cena. One assumes that if anyone is immune to the WWE cover hex, it’s the organization’s resident Superman. When Cena went down with a knee injury a few months ago, I joked that doctors said he had ruptured his ACL and MCL and dislocated his kneecap and the estimated recovery time was 45 minutes. That wasn’t a joke about wrestling being fake so much as it was a joke about Cena being superhuman.

Cena was elevated back to the top of WWE’s hierarchy — if he ever really left — partly on account of his Herculean durability. Following the neck injury that sidelined champ Daniel Bryan — who himself was featured on an alternate cover of the 2K14 box — and a calamitous financial half-year that saw WWE’s stock price collapse because of an underwhelming new TV deal and lower-than-anticipated subscription numbers for the Internet-based WWE Network,4 WWE has scrambled to right the ship. A few weeks back, the company fired an eyebrow-raising number of performers: JTG, Evan Bourne, Yoshi Tatsu, Brodus Clay, Curt Hawkins, Aksana, Jinder Mahal, Camacho, referee Marc Harris, and, most surprisingly, Drew McIntyre (who, despite being stuck in a silly gimmick as part of the 3MB faction, has a mind-blowing amount of upside) and Teddy Long (a onetime referee turned manager and authority figure who was assumed by most in the industry to be an employee for life). Announcer Josh Mathews followed shortly thereafter, which was surprising since he was the anchor of WWE’s new PPV pre- and post-shows. WWE stopped providing bus travel between shows for its crew members, meaning that instead of riding a bus from town to town, they’re left to rent cars and drive themselves. WWE was within its rights to do this, but the move still signals a drastic effort to cut costs.

But if you’re looking for a real sign that WWE is worried about its financial situation, look no further than the recent in-ring proceedings — the return of Cena as champion and everything that has followed. Cena’s presence atop the card is a nod to the security he brings — not just in physical stability, but also with his reliable star power (despite his legion of vocal hecklers in every crowd). Say what you want about Cena, but it’s hard to imagine a true superfight in the sport that doesn’t involve him. So perhaps it comes as little surprise that the promotional posters for SummerSlam that leaked last week featured Cena and Lesnar, insinuating a rematch between the two megastars. It’s an intriguing thought, especially now that Cena is champion and a SummerSlam match could potentially put Lesnar in a position to win the title, since his contract requires only a few appearances a year. Could McMahon have redirected some of the salary he saved in the talent purge to coax more dates out of Lesnar? Only time will tell. But suffice it to say that more Lesnar is a good thing for WWE’s bottom line.

But the surprises don’t stop there. Monday’s Raw promised the return of a former WWE champion, and after teasing the audience with the returns of the Great Khali, the Miz, and even Chairman McMahon himself (he was portrayed by Damien Sandow, who’s slumming it these days as a serial impersonator), WWE uncorked two legitimate surprise comebacks: Chris Jericho, who is poised to feud with Bray Wyatt and his cultish clan, and AJ Lee, whose run was widely presumed to be kaput following her conspicuous departure a few months back and her subsequent real-life nuptials to prodigal son CM Punk. (Unfounded rumors that she was also pregnant made her return even more shocking.) Lee won the Divas championship back from Paige, who had won it from her the night after WrestleMania.

And, in contrast to many previous shocking returns, none of these except (potentially) Lesnar affect the World Heavyweight Championship picture, which is hitting on all cylinders despite — or because of — Cena’s win at MitB. After unveiling the ominous 2K15 cover Monday, Triple H announced that the main event of next month’s Battleground PPV would see Cena defend the strap in a Fatal Four-Way match against burgeoning megastar Roman Reigns and two of Triple H’s cronies, Orton and Kane. Looming in the background is Seth Rollins, another minion of the Authority, who won the preliminary Money in the Bank match Sunday, thus guaranteeing him a title match at the time of his choosing, which might come at the end of Battleground if Cena manages to retain the belt. (Looming in Rollins’s shadow is his old partner Dean Ambrose, who promises to sabotage any attempt Rollins makes to cash in his title match.) All of this adds up to an increasingly intriguing main-event scene; even if WWE managed (as one reader tweeted to me) to take the most unpredictable PPV in recent memory and give it the most obvious outcome possible, it has carried some of MitB’s unpredictability into the storytelling going forward.

I’ve said before that there’s nothing wrestling fans love more than unpredictability. The more potential outcomes of every show, the more wrestling fans will engage with it. This isn’t the ’80s, when Hogan would almost always win and fans didn’t mind as long as their subconscious minds were sufficiently tickled with Heroic Journey symbolism. Nor is this the day when video games were simple, two-dimensional, and linear. This is a modern world where the video games are 3-D and open-ended, and fans demand wrestling story lines with matching degrees of creativity and unexpected turns and freedom from convention.

You might think it odd to even bother comparing video games to a mock sport that more than anything else resembles, well, a real-life video game. And you might roll your eyes at the notion of calculating tragedy based on an arbitrary superstition when the entire industry sometimes seems cursed. It’s a fair point, but if history — and the recurring disappearances of performers after they appeared on a video-game cover — has told us anything, it’s that no star is bigger than the WWE logo. WWE is, to borrow its own parlance, the face of the company. And yet WWE has somehow avoided its own curse for years. Let’s hope it won’t fall victim to it now.