1. One of the saddest clips I’ve seen in the past few years is the one in which LeBron James bumps Erik Spoelstra on his way back to the bench — here it is in Zapruder slow motion. It’s one thing for a sulking player to glare through you or argue about tactics in the huddle or openly defy your orders. It’s another if they bully you. Worse yet: What if LeBron didn’t mean it, and Spoelstra, a coach who now has a ring but lacks aura, was completely invisible to his line of sight?

2. I’ve always wondered what it would be like to be under the influence of one of those coaches or managers for whom players will run through a brick wall. But I imagine that running through brick walls gets old. The ability to impart some kind of coherent, collective vision matters, too — just look at the Saints without Sean Payton. Great management puts players in a position to succeed, and in this way the collective delusions of the post–Mike Brown Lakers should have been obvious all along. “I’m genuinely excited about it,” Kobe Bryant said of the hiring of the universally well-liked Mike D’Antoni. D’Antoni’s not a players’ coach the way Rex Ryan might be described as a players’ coach. Rather, he is an “offensive genius,” the type of coach whose inflexible philosophies appeal to the baser, bucket-getting instincts of players around the league. “He said we should be scoring 110-plus points per game,” a chuffed Dwight Howard explained, perhaps unaware that his new teammates are really old.

3. After watching the first season of Being: Liverpool, I’m willing to believe that Brendan Rodgers might one day lead Liverpool back to glory, or at least to non-shame. It’s not because of his managerial philosophies or vision or the talent he’s stockpiling at the club or his ability to tell his players they cannot lose because they are playing for “(1) your families, (2) the supporters, (3) each other.” It’s because of his time management and organizational skills. The series follows Liverpool as they prepare for their first season under the former Swansea manager, and it’s exhausting to witness all the tedious little aspects of Rodgers’s job that have nothing to do with match preparation. This is one of the most famous clubs on the planet, and while his players are going golfing and learning English, he’s helping manage the brand with their corporate partners and schmoozing with board members, all while getting acclimated to his new surroundings and telling a camera crew about it. If you ever doubted Bobby Valentine’s ability to deal with what it means to manage a flagship franchise in the year 2012, here he is doing the Fenway Sports Group’s bidding and allowing Liverpool to tour the Red Sox clubhouse before a game. You can probably see the sushi-heavy thought bubbles above Valentine’s head as Rodgers presents him with a commemorative Liverpool shirt. He snaps out of his daze just in time to register what is going on: “NIIIICE.”

4. Rivalries between opposing managers are intensely fascinating because they bring about moments when calm, collected figures of authority absolutely lose their cool. Dusty Baker’s “obsession” with Tony La Russa or Rick Pitino and John Calipari’s mutual hatred come to mind. Or maybe they gamble like mad in the name of psychological warfare, like the time Mark Richt sent his entire team into the end zone to celebrate a touchdown against Urban Meyer and Florida. The too-hard postgame handshake or the massacre-prolonging timeouts are the only forms of direct combat available to these intensely competitive, detached strategists.

A couple weeks ago, Manchester United honored their legendary manager Alex Ferguson with a statue outside of Old Trafford. Eric Cantona, Ruud van Nistelrooy, and other United legends from his 26-year history at the club came to honor him, while David Beckham and Cristiano Ronaldo sent their regards via video. That same day, Ferguson fired shots at newly installed interim Chelsea manager Rafa Benitez, with whom he’d previously tussled when Benitez was at Liverpool. “Rafa Benitez is very lucky because on his CV in two weeks’ time he could have two world championships to his name,” Ferguson remarked, referring to the FIFA World Club title, a title that nobody really cares about. Everyone knew what he was doing. Ferguson is pathological about reminding opposing managers of his successes; he delights in passive-aggressively goading them, praising everyone else at their club but them, all in the name of inspiring some kind of blustery meltdown. The only reason Ferguson said anything was to irritate Benitez, to point out how tenuous his position is at famously manager-bleeding Chelsea, all while his own statue went up behind him.

5. Up until one day in high school when I got Mike Shanahan’s autograph while waiting in line at McDonald’s, the most famous person I had ever met was LaVell Edwards, the legendary BYU football coach. My parents had taken me to Disneyland for the holidays. One night we were walking back to our hotel when we noticed a charter bus pull up to the back door. A queue of beefy young men with dour haircuts filed in and, assuming this was a team of some kind, I tried to see if I recognized any of them. They passed us by, and a middle-aged man in a baseball cap remained at the door of the bus. He smiled to us and wished us well. I asked to take a photograph with him, and then I asked who he was. He told us he was the coach of the BYU football team and that they were in town to play in something called the Freedom Bowl. 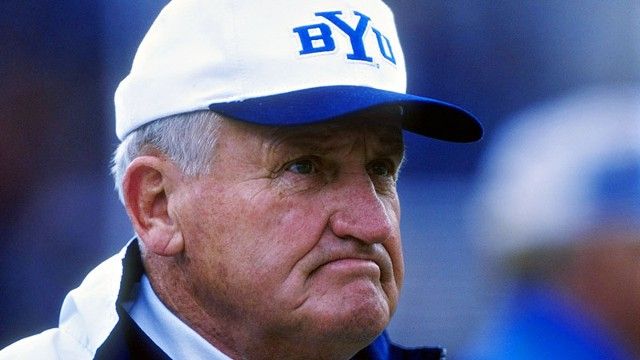 Once we got back home, it became my immediate life priority to watch the Freedom Bowl. I spent a day preparing, learning what little I could in those pre-Internet days about BYU and their opponent, Colorado. BYU won, despite a rugged effort by Eric Bieniemy. I looked up the address to BYU at the library and wrote a letter congratulating Coach Edwards. A few weeks later, I received a brief, typewritten letter on fancy, watermarked paper. Edwards thanked me for my note, encouraged me to stay in school and whatnot, and attached a small square of BYU stationery, upon which he listed some of his program’s most famous products: Jim McMahon, Robbie Bosco, Steve Young. I stopped caring about BYU as soon as I watched Raghib Ismail play, and who knows if the signature on that letter was even real. But there was something about that encounter that made me feel significant; it gave some substance to that thing people say about a good coach making every member of the team feel valued. I started memorizing the names of coaches and managers alongside the players.

This is why it’s so depressing when the coach is the one leading others astray — cavorting about on motorcycles with young coeds, paying 11-year-old kids to hit each other, etc. They’re the only ones who go through the motions of using managerial buzzwords like “integrity” and “honesty” and “authenticity” and “community.” They’re the only ones who should be expected to know any better, and when they don’t, it seems a violation of trust. In what other settings do talented, self-motivated people crave guidance and authority?

6. What does it mean when we say that a team assumes the identity of its coach? We hear this a lot when things are going well — the way Tom Brady seems to sheathe his charisma and become more sullen and Belichick-like in front of the press; the cool, fashionable “Showtime” Lakers of the Riley era; the stern, character-tested toughness of the Torre Yankees. We like to think of Jim Harbaugh as the type of coach who, by mere fact of walking through that front door, instantly changes the “culture” around him. There’s a lot more to it than that, obviously. He inherited a rugged defense and he surrounded himself with a talented staff. But the narrative of the strong, visionary coach is a captivating, easy one, and Harbaugh seems to realize it — in fact, it sometimes seems like he’s deeply self-aware about staying in character. He can be miserably deadpan and condescending like all the rest, but there’s also a mischievous, smart-ass confidence to him that occasionally surfaces. He’ll quote 16th-century Scottish privateers, Hemingway, and Jedi theology and then make fun of Californians and their “feelings.” I was astonished to see him appear on tackle Joe Staley’s web series and show off his dance steps. When news broke a couple weeks back of Harbaugh’s return to practice mere hours after having a “minor procedure” to correct an irregular heartbeat, it was taken as a sign of the 49ers’ collective grit. But it also seemed like a gesture designed to cultivate his “tougher than a $2 steak” image. “He showed no emotions. He didn’t show anything like that,” safety Dashon Goldson remarked, lest we mistake Harbaugh for a human being.

7. Is there a better way to end a speech than “Let’s go eat a goddamn snack”? At the opposite end of the spectrum is Rex Ryan, whose half-earnest, half-crazed persona seems to perfectly fit his erratic Jets. Whereas Harbaugh has steered his team toward a quarterback controversy with a reticent confidence that makes you assume he knows exactly what he’s doing, Ryan is always at risk of saying too much. He’s too honest and open, a trait you can read on the wounded face of Mark Sanchez or the sad bombast of Bart Scott. Watching the implosion of local teams you’re not a fan of is one of the delights of living in New York that nobody ever told me about. Like when Ryan was recently voted the most overrated coach in the NFL, whatever that means. Watching his now-legendary Hard Knocks speech, though, you get a sense of why his sympathizers are always ready to remind anyone who will listen that guys love playing for him. “I DEMAND THAT WE HAVE FUN,” he exclaims, in the hope that his team will finally realize their potential as world-beaters. He’s forceful, clear, and passionate, a steady mix of self-deprecation and self-importance. He tells the assembled Jets that they are better than anyone else in the league — “Those are true statements,” he explains. “That’s how I believe.” And maybe that’s the problem, that gap between true statements and belief. Even a madman holds convictions.