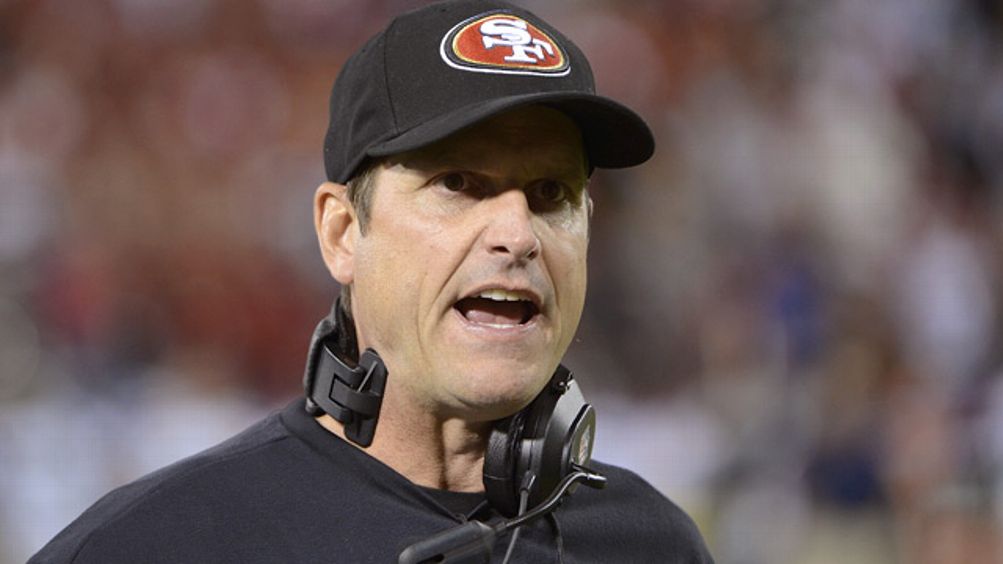 The most valuable asset in the NFL is having a franchise quarterback signed for a relative pittance. It’s no accident that the Trade Value list I put together in August was littered with quarterbacks within the top 10. If Andrew Luck hit the free market this past offseason without being drafted, a quarterback-desperate team like the Browns or Jaguars would have given him $50 million in guaranteed money in a heartbeat, but the league’s CBA restricts him to $22.1 million over four years. That savings (just under $28 million) is for the Colts to spend however they like — a reward for having an awful season at exactly the right time. Isn’t football fun?

After I put together the midseason update to the Trade Value rankings I started to get the feeling like I was missing something. There is one other asset a team can hold that’s actually remarkably similar to the cheap, talented young quarterback: a head coach. And when I thought about great head coaches, naturally, my mind turned to Jim Harbaugh.

The 49ers signed Jim Harbaugh away from Stanford for a pittance. His buyout figure hasn’t been publicly reported, but if there was one, it likely wasn’t more than a couple million bucks. San Francisco gave Harbaugh a five-year, $25 million deal to replace Mike Singletary and take over a franchise that had gone 46-82 since Steve Mariucci left town. Since then, with virtually the same roster Harbaugh inherited,1 the 49ers have gone 21-6-1. and made it within a premature whistle of making the Super Bowl. It’s the best decision a franchise has made of their own volition (e.g., without having an obvious choice fall into their laps) in recent memory. By acquiring Harbaugh, the 49ers created value for themselves in a way that is virtually impossible to match. They might, in fact, have the single most valuable asset in all of football.

Let’s put that contract into perspective for a minute. Jim Harbaugh is making $5 million per season to be, arguably, the best person in the league at his exceedingly important position. You know Panthers defensive end Charles Johnson? Maybe the 10th-best 4-3 end in the league? He received $34 million in compensation in 2011 alone. That’s more than Harbaugh will receive over the life of his entire deal, with $9 million left over for Johnson to write thank-you notes to Marty Hurney. A top-five head coach is being paid what an average cornerback would make in a given year. Doesn’t that seem wrong?

The weird thing is that we know, inherently, that teams value coaches much higher than that. When Bill Belichick “quit” his job as head coach of the Jets and announced that he was joining the Patriots instead, New England ended up giving the Jets a first-round pick for Belichick’s services. And remember, that was Belichick when he was popularly known as Bill Parcells’s top assistant who had put together a disappointing run in Cleveland, not the Bill Belichick we know today. A top coach is worth even more. When the Buccaneers decided that they wanted to take Jon Gruden away from the Raiders, the cost was astronomical. Tampa Bay gave Oakland two first-round picks, two second-round picks, and an $8 million transfer fee to get their man.2 Of course, the Buccaneers didn’t regret it: They went to the Super Bowl the following season, where they beat those very same Raiders, 48-21.

If a team really wanted to acquire Harbaugh today, the price would probably be roughly similar to the figure the Raiders quoted for Gruden, who had taken over a 4-12 team and gone 38-26 in four seasons without advancing past the AFC Championship Game.3 How many players in the league would extract a similar bounty in trade talks? When the Redskins acquired the second overall pick in this year’s draft from the Rams to grab Robert Griffin III, they gave up a somewhat similar package: the sixth overall pick and a second-rounder in the 2012 draft, plus first-round picks in 2013 and 2014. The Bears grabbed Jay Cutler from the Broncos for two first-round picks, a third-rounder, and Kyle Orton. The sort of trade value a top coach would appear to have is roughly similar to that of a young franchise quarterback, which leads me to believe that the league values Harbaugh as an asset somewhere in the range between RG3 and Cutler. I lumped them both together in the draft value piece, but Griffin’s no lower than the fifth-most valuable player in the league right now, and Cutler’s no lower than 20th.

Let’s consider what players in that range are paid. While Griffin is being paid a pittance ($21 million over four years) because the league doesn’t allow him to negotiate on the free market, there are plenty of veterans in that range who have signed contracts that pay them something close to market value. The quarterback in that area who signed a deal most recently is Drew Brees, and when the Saints locked him this offseason, they gave Brees a deal that pays him $20 million per year and $40 million in the first year of the contract. Before that, Michael Vick signed a six-year, $100 million deal with the Eagles that guaranteed him $32.5 million while paying him around $45 million or so over its first three years.

Harbaugh’s deal is entirely guaranteed, but even if we compare it to the first three years of deals being signed by players in his trade value range, Harbaugh is underpaid by somewhere between $10 million and $15 million per season. Outside of Luck and Griffin (and maybe Cam Newton and Russell Wilson), that makes him the most underpaid asset in the league. If Harbaugh stays this good over the course of his five-year deal and doesn’t rip up the contract at any point, the Niners are recouping something to the effect of $50 million to $75 million in value over the course of Harbaugh’s deal. When you’re building a $1.2 billion stadium, saving $75 million sure comes in handy.

Of course, there are some assumptions being made here. Notably, while the 49ers undoubtedly hoped that they were getting the best coach in football when they signed Harbaugh away from Stanford, there was no guarantee that they were getting a truly great coach; the league is littered with brilliant college coaches who were sent packing back to the amateur ranks. When Harbaugh signs his next deal, it will undoubtedly be for more money, but the truth is that the deal really won’t be for all that much more. Although Belichick’s exact level of compensation remains a state secret, Forbes estimates it at $7.5 million, which would narrowly make Belichick the highest-paid coach in the league over Mike Shanahan ($7 million). When Harbaugh signs his next deal, how much more than those coaches will he really get? $8 million per year? $9 million? That’s a bargain when you consider that the next contract Andrew Luck will sign could take his $5.5 million salary and triple it to $16.5 million while throwing in a signing bonus around $50 million. The salary ceiling for head coaches is almost absurdly low given their value.

What makes that fact even more bizarre is that coaching salaries are uncapped. If you’re a deranged billionaire hell-bent on winning a dozen Super Bowls, you can’t be Manchester City and buy the biggest stars from each NFL team. You can’t whisper “$50 million per year” into Aaron Rodgers’s agent’s ear and wait for him to hit the market; he’ll be franchised, and even if you gave him that much, you wouldn’t be able to build a team around him. What you can do, though, is spend as much money as you want in places where the league doesn’t have a salary cap. You can build the best practice facility on the planet and emulate every possible set of weather and crowd conditions. You can invest millions into developing fantastic medical facilities and hiring great doctors and shave time off your injured players’ rehab. And, yes, you can whisper “$20 million per year” into Jim Harbaugh’s agent’s ear, and if Harbaugh doesn’t want to re-sign with the Niners, they can’t franchise him and you don’t have any money come off of your cap space. It’s a place where a team with deep pockets can gain a competitive advantage in a way that they simply can’t by spending on players.4

There are other advantages to investing heavily in a top-of-the-line coach as opposed to a similarly valued player. Coaches are far less likely to rock the boat: They don’t hold out and can serve as an effective voice of reason in disseminating the party line the organization wants to put out. While a good quarterback can help bring a young team along — just witness Peyton Manning’s work with the Denver offense this year — a coach is further able to impact player development by both selecting the appropriate players to use and then nurturing them into superior talent. Because coaches aren’t relying on fast-twitch muscle fibers, their peaks last much longer. They don’t appear to slump, although I suppose you can make an argument that it’s possible. Coaches are also extremely unlikely to suffer injuries5 and are almost always present and accounted for across the entire 16-game slate. That’s not true for players.

Coaches aren’t without their disadvantages, either. While the cumulative career of an elite coach is almost always longer than a similarly skilled quarterback, the coach is likely to have a shorter career in one particular spot than a player, especially at the professional level. Smart teams take advantage of what they know about the aging curve by paying younger players for their peak years and avoiding big salaries on rapidly aging talent that’s past its prime, but that’s a harder act in evaluating and signing coaches. Because coaches are older and have longer careers, they’re also more likely to be set in their ways and use outdated, antiquated methods than a top player in his prime would be. There are also some financial burdens: Coaches get guaranteed contracts, and when you fire your head coach, chances are that you have to let most of his assistants go, too. You can cut a player without needing to get rid of everybody around him.

In all, though, I think it’s pretty clear that Harbaugh and elite coaches of his ilk are vastly underpaid and responsible for producing huge amounts of value for their respective organizations. Even if you don’t value Harbaugh at the level of a player like RG3, it’s pretty clear that his trade value is commensurate with that of a player who would make somewhere around three times his salary in a given year. One day, an enterprising owner who’s sick of losing is going to realize that and snap up Harbaugh or Bill Belichick by promising them $15 million a year when their contract expires. Until then, Harbaugh’s going to have to ply his trade as one of the league’s most undervalued assets.

A previous version of this story incorrectly listed Jim Harbaugh’s record as 26-1-1. We apologize for the error.