The 10 Teams That Should Dominate Free Agency

Welcome to the WWE Network 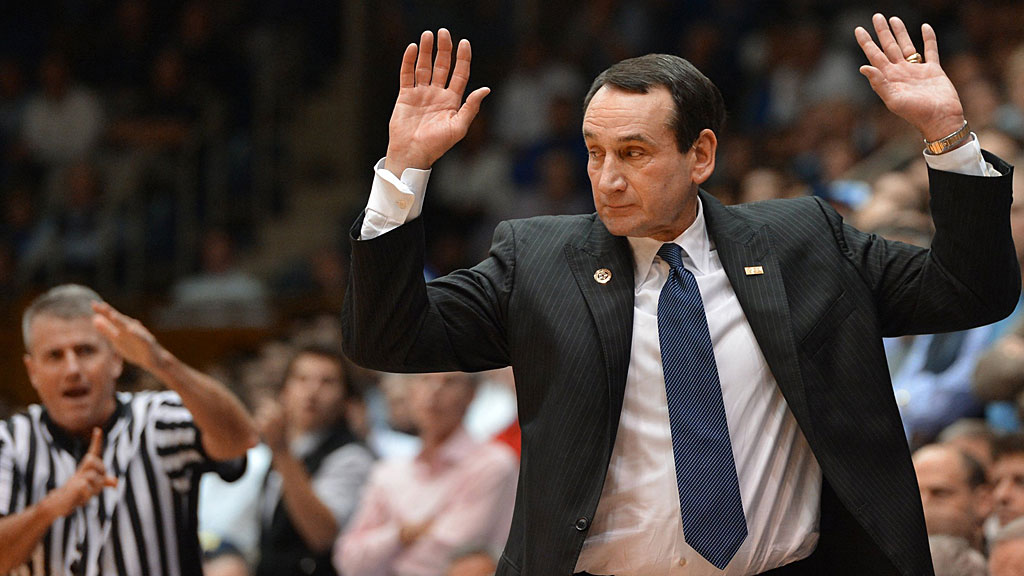 “I define passion as extreme emotion,” Mike Krzyzewski once wrote, and the amazing thing about this sentence, apart from its later being found worthy of inclusion in the “quotes” section of his official website, CoachK.com, and apart from its kind of bewildering implication that there are people out there who define passion as something else — as if at any time, one of his readers might go, “Interesting, but I define passion as a type of attack helicopter” — is that he wrote it in a book called Beyond Basketball: Coach K’s Keywords for Success. Which you would not think, given its Kiwanis Club awards luncheon of a title, would make a likely site for a defense of violent feelings. But read the book, which was ghostwritten by Jamie K. Spatola, a name that I know is not a pseudonym for Thomas Pynchon only because it belongs to Krzyzewski’s youngest daughter, and you will learn that Duke’s basketball coach is pro-passion from miles back.1

It’s a little startling, though, isn’t it, this juxtaposition? Coaches looking to write leadership books or make fast cash on the speaking circuit are forever trying to port ideas from the fun side of sports (like “extreme emotion”) onto ideas from the triangles-on-whiteboards side of business (“team building,” say, or “crisis management”). But no one has made this a personal signature quite like Krzyzewski. He’s never just leading, he’s Leading With the Heart. He’s never just solving a problem or trying to win a game, he’s modeling the wisdom of his sentiments. You can imagine him talking to limo drivers about eye contact, helping flight attendants understand trust. It’s rare for someone’s passion to blossom quite so spectacularly into a bog-standard executive-retreat keynote presentation, I guess. But the heart wants what it wants.

There’s a contradiction in the hatred, too, or at least there is in some of it. On the Internet especially, the rhetoric of Coach K–loathing tends to focus on Duke’s perceived elitism, in all its manifold forms. And yet, in my necessarily limited experience, it’s often not blue-collar dudes who are tweeting this critique. People who went to Harvard hate Krzyzewski for not coaching at Kansas State.3 You can argue whether this has more to do with legitimate egalitarianism or with the fact that Krzyzewski, a Polish Catholic working-class kid from Chicago who scrapped his way through West Point, simply articulates a vision of success alien to the private school experience, Duke or no Duke. Either way, though, he’s a lightning rod. It’s as if a commoner became king only to find that the aristocrats claimed to hate monarchy. It’s as if the pseudo elitism you see in his business books has galvanized a pseudo anti-elitism to oppose it.

He’s so preoccupied by the notion of success that it’s fascinating to think about how he copes with failure. This year, with Duke roughly tracking preseason expectations, the disasters he’s had to face have been minor, as usual. He’s got one of the most entertaining freshmen in a class that’s absolutely full of them,4 and the losses — a couple of points at Notre Dame here, a nail-biter at Syracuse there — haven’t really been devastating. Even with the weird stumble at Wake Forest on Wednesday night, the Blue Devils are cruising toward the 2-seed that’s seemed written in their stars all season.

What about the little failures, though? Or the occasional big ones, like the first-round loss to 15th-seeded Lehigh in the 2012 NCAA tournament? Krzyzewski likes to talk about his “next play” philosophy, the idea that whatever just happened is already irrelevant, because your focus in basketball (“and in life,” as any ghostwriter worth her as-told-to credit would insist I append at this moment) should be on what happens now. The loss is already gone, think about the win that will follow it.5 On the other hand, Krzyzewski’s wife, Mickie, has described listening while he cursed furiously from another room in the house, assuming he was on the phone, and wondering who was the poor sap he was ripping apart, only to discover — of course — that he was talking to himself. Duke had lost, and he thought he’d made a coaching mistake. You get a sense of this side of him sometimes when he jumps up to flamethrower a referee, all that rage just seething below the surface, looking for an excuse — I mean a sense that what he sees in the mirror may be something other than a Leader With a Heart, and that he probably wouldn’t describe it with a Keyword for Success.

He turned 67 last month. That seems both impossibly young (he’s been coaching at Duke for 34 years, more than half his life) and impossibly old (aside from a few refinements to his hair-parting work flow, his appearance is eerily unaltered). He’s won four national championships. He’s cowritten five terrible books. Maybe the most astonishing Mike Krzyzewski fact is that he was inducted into the Basketball Hall of Fame way back in 2001, meaning that he’s taken over USA Basketball, won two Olympic gold medals, nabbed a FIBA world championship, and brought home an additional NCAA title after his résumé was already considered Hall-worthy. I’m not endorsing either his parenting advice or his Republican Sith-lord loafers, but that’s something.

What I keep wondering is this: What if he’s not lying? I mean, what if he hasn’t been pandering to corporate-event schedulers with his seminar buzzspeak all this time; what if he really means it?6 What if he’s a kid from Chicago who’s ridden basketball to insane heights but still feels like he’s on the edge of oblivion? People who are obsessed with success are usually really obsessed with failure, and people who keep gritting their teeth and drawing up set plays decades after they’ve become multimillionaires are as likely to be running from something as chasing it. This could be total nonsense, but when I think about Krzyzewski I keep imagining that talking about branding and how communication is based on trust helps relieve some ongoing panic inside him, as though building an edifice of comforting ideas is a way to keep the floor from caving in. Even better, of course, if you can sell those ideas to businessmen. Businessmen aren’t going anywhere. Businessmen are secure.

What this says about passion I have no idea. But after the Wake Forest loss a couple of days ago, Krzyzewski sent Steve Wojciechowski out in his place for the postgame press conference. Wojo revealed that the coach had been suffering from dizziness on the bench. The doctors checked him out; it’s apparently nothing; you can never be too careful. That kind of thing. Coach K hadn’t been sick, Wojo said. But “maybe the emotion got the better of him.”