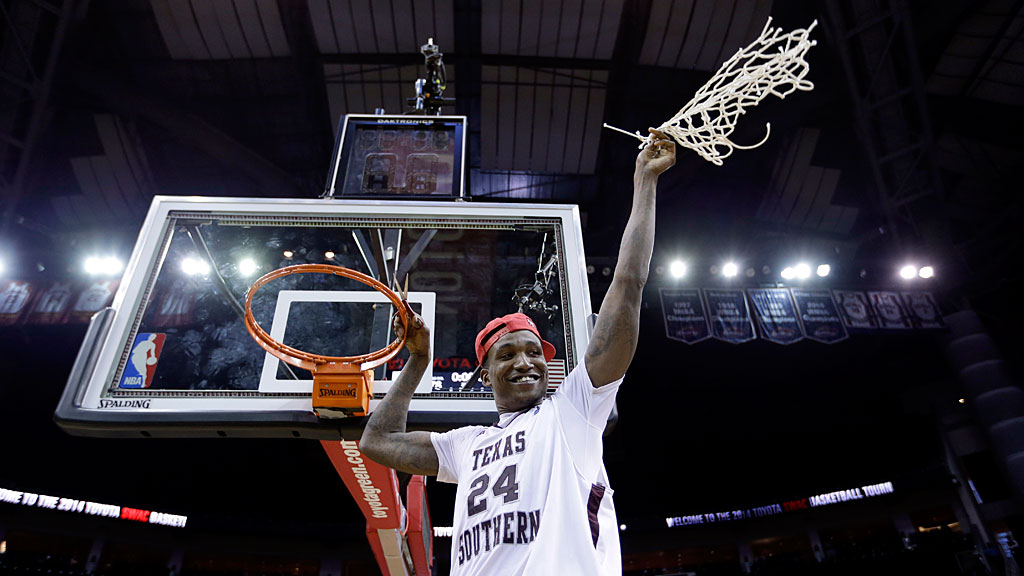 The bands play with pride and purpose. The bands have histories, just as their schools do. The bands have nicknames. The Prairie View A&M Marching Storm. The Texas Southern Ocean of Soul. And the Southern University Human Jukebox. The bands have nicknames because the bands deserve nicknames, and if you understand only one thing about the Southwestern Athletic Conference, then understand that. There are pride and purpose and history to these schools — a different history, and a decidedly less pleasant one, than the history that attends most of the other teams represented in this year’s NCAA tournament. These schools are in many ways proud and stubborn reminders of this country’s broken promises. They were for many years orphan schools and first came together in Houston in 1920, as a league of six Texas colleges, which now extends from Prairie View in Texas to Huntsville in Alabama. They were orphan schools in an orphan league. They are now known as “historically black colleges and universities,” and their futures are perilous and uncertain, just as they’ve always been. That is their history and that is their legacy.

On Saturday in Houston, Texas Southern beat Prairie View, 78-73, in a ragged, wonderful basketball game to qualify for the NCAA tournament for the first time in more than a decade. The Tigers’ coach, Mike Davis, has now brought three different teams into the bracket, having done so also at Indiana and at Alabama-Birmingham. Texas Southern is led by a 6-foot-10 center named Aaric Murray, who’s going to get a look at the next level, and for whom Prairie View had no answers. He scored 27 points, had 10 rebounds, and helped the Tigers come back from a 13-point deficit at one point in the first half. Texas Southern missed 13 of its first 15 shots, but shot 65 percent in the second half, and put the game away by coolly hitting 12 of its last 14 free throws. But, perhaps more important for the SWAC, both of the teams that threw it up in the championship were eligible to play in the NCAA tournament. This was not entirely a lock when the conference tournament began.

Four members of the SWAC — Arkansas–Pine Bluff, Grambling, Mississippi Valley State, and regular-season champion Southern — were all declared ineligible for this year’s NCAA tournament because they had failed to meet the standards of the NCAA’s academic progress rate. (This is the same thing that kept Connecticut out of last year’s tournament.) The SWAC presidents then met and agreed to allow the four ineligible teams to play in the tournament in Houston, undoubtedly because presenting a spavined product in the league’s first year in the cavernous Toyota Center would have been a financial and public-relations disaster. Somewhat surprisingly, and with no little controversy, the NCAA gave its blessing to the arrangement. If one of the ineligible teams had won the tournament, the next-highest eligible team would have represented the conference. If two ineligible teams had contested the final, the entire tournament might have been rendered a farce. Luckily for the conference, and for its commissioner, Duer Sharp, all four ineligible schools lost before the semifinals; Prairie View took out both Mississippi Valley State and Southern. For his part, Sharp insisted the tournament was everything he’d planned when he’d arranged to play it in Houston.

“This is where our roots are. We started in Houston,” he said. “I thought my staff did a great job giving the presidents and the chancellors all the information they needed so they could make an educated decision … I have to commend those guys for getting it done as quickly as they did.”

Nevertheless, Sharp and his league dodged a fiasco when four eligible teams won their way into both of the league championships. (Texas Southern and Prairie View also played for the women’s championship, with the women of The View — that’s what it says on the jerseys; Whoopi and Barbara, take note — coming away with their fourth straight SWAC title.) The power conferences who run the NCAA don’t need much of an excuse to muck around with orphan leagues like the SWAC, and having the conference send, say, its fourth-place team to the tournament would have sent up enough red flags to start a May Day parade in Indianapolis. But Texas Southern is the champion, clear as a bell, and as worthy of admiration as any other team in the field. “We know,” said guard Ray Penn, “that we represent our league, and all that it means to people.” On my ballot, however, the battle between the Marching Storm and the Ocean of Soul came out a draw. 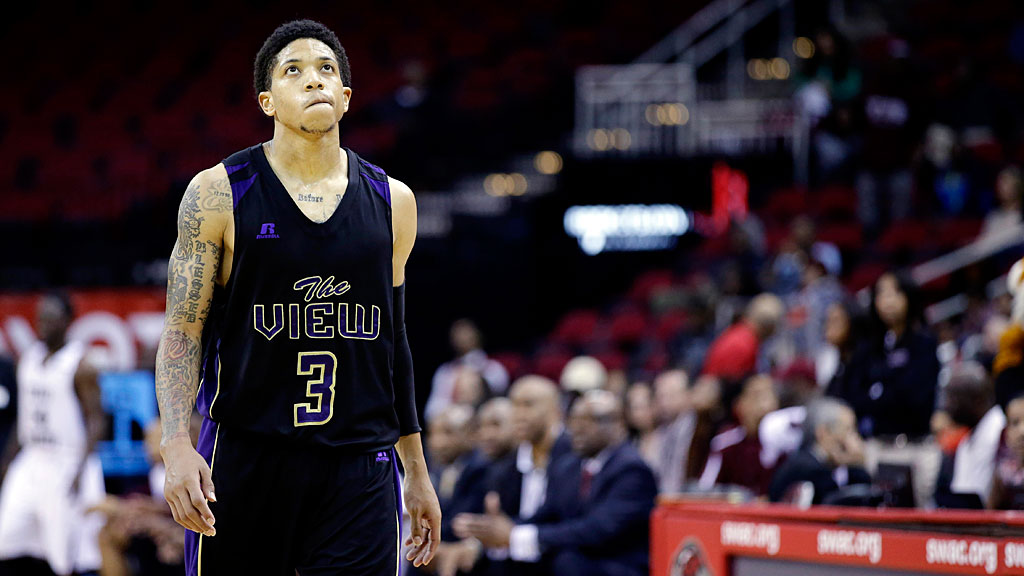 Dr. John Rudley needed some coaxing. The Tigers were gathered in an unruly knot at center court. One of them was holding the tournament trophy. Two held a Texas Southern banner that stretched across the entire front row. They were trying to get Rudley, the school’s president, to join them for photographs. Rudley, who already was wearing a SWAC champions baseball hat, demurred for a moment and then, shyly, took his place at the far left of the front row, behind the banner. “I’m elated,” he said. “It just takes your breath away.”

He came to Texas Southern in 2008, after a career that included a stint at the Department of Education, and a long stretch in the administration of the University of Houston. He understands all too well the unique history, and the unique challenges, that exist at a place like Texas Southern. “All historically black colleges have been struggling over the years financially and, in the 85 years of our history, we are all in this struggle together,” he said. “And having our teams come here to play today, to give them the opportunity to play in Houston, and to be seen in the fourth-largest city in the country — I mean, what else can I say?”

Some of them, like Alabama A&M and Prairie View, are land-grant schools, products of the second Morrill Act in 1890, which extended the original act to the states of the former Confederacy with a provision that race not be a factor in admissions. Some of them are simply state universities, like Jackson State and Alabama State. (In Mississippi, for example, Alcorn State is the land-grant school and Mississippi Valley State and Jackson State are state universities, the way Ole Miss is.) And some are private. What they all share is a history of having lived through nearly a century in which separate was quite definitely — and quite deliberately — not equal. (At Southern, for example, they still talk about the time, decades ago, when the school choir was invited to sing at an event up north and the Louisiana Legislature wouldn’t fund the trip unless the choir sang, for free, in its chambers.) The purely state schools among their number always have been the most vulnerable; in 2009, Mississippi governor Haley Barbour proposed to fold Alcorn State and Mississippi Valley State into Jackson State, creating one university with three campuses. The ensuing political uproar sank the plan for the moment, but people like Rudley know the futures of their schools remain uncertain.

“Finances are a part of our lives,” Rudley says. “We don’t have the deep pocketbooks like the big schools do. So we struggle along, and it’s all about trying to make quality programs for our students.” The APR that disqualified half the conference was an embarrassment, and it was seen in some quarters as a betrayal of the legacy of which the members of the SWAC are so proud. But they are starved for money, as they always have been, and academic support programs are expensive. According to a 2013 data analysis by the Department of Education, Louisville spent $15,653,605 on its men’s basketball team. In contrast, Texas Southern’s program had $1,475,117 in total expenses that year. That doesn’t excuse what happened at the four schools in question, but it does explain a bit about why it happened. These institutions were born as places of opportunity in a time and place when opportunity was in short supply, for students who didn’t have much of it. The schools are orphans that have survived because they gave people a chance. 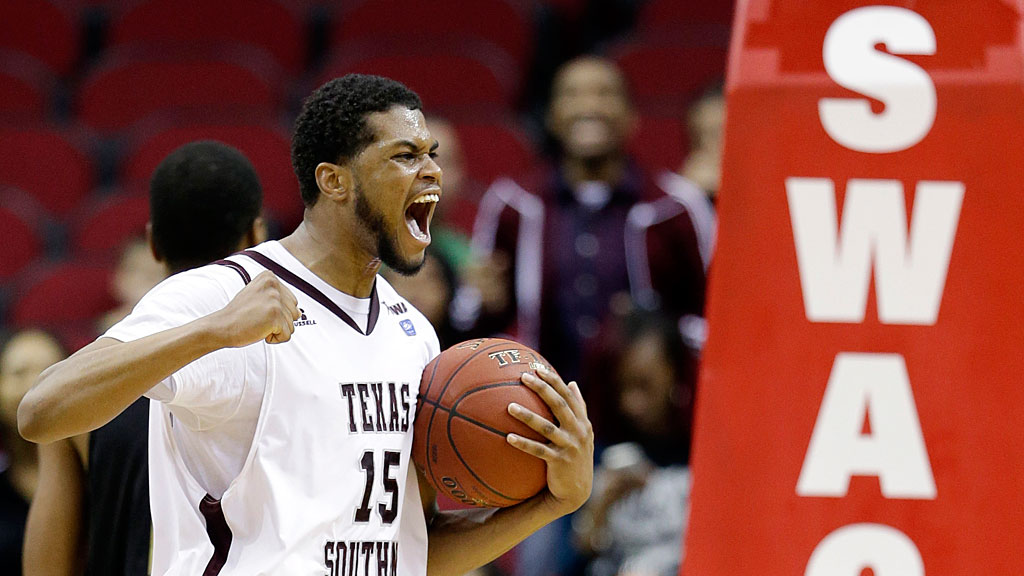 Mike Davis has seen the big time. It was Davis who replaced Bob Knight at Indiana when the latter finally imploded, and it was Davis who got the Hoosiers to the 2002 NCAA championship game, which they lost to Maryland. He never was able to match that success, and he resigned under pressure in 2006. (The pressure, some of it from Knight loyalists who hated the university more than they disliked Davis, was not pretty.) From there, he moved on to Alabama-Birmingham, where he got the Blazers to the tournament, but was let go in 2012 for, among other stated reasons, poor ticket sales and attendance. That summer, he was hired as interim coach at Texas Southern, and was given the job full-time in October. It was a long, humbling road.

(At Indiana, Davis once threw an amazing on-court tantrum in a game against Kentucky. Last Friday night, during the semifinal win over Alabama State, he came all the way to midcourt to get in the face of one of his players after a dumb foul late in the game. To his credit, he said afterward that he was embarrassed by his behavior. “I thought I did a poor job,” Davis said. “I got a little emotional there and, in my experience, I know I can’t coach my team that way. I’ve learned it’s really important for the coach to stay calm.”)

Davis stood at midcourt on Saturday, embraced one and two at a time by his players, and his long, almost mournful face lit up with a smile. “It’s special because I didn’t have a job,” Davis said. “I’m just happy that Texas Southern gave me that opportunity. It’s been a long road. I mean, my last year at UAB, I wasn’t very good. I lost my mom. I lost my two nephews within a three-month period. It’s been real tough on me for the last couple of years. But these guys gave me the opportunity to coach, and they listened to me, and the program believed in me. I’ve been so happy, just to be in Houston.”

It can be argued — and should be — that leagues like the SWAC are more true to their histories and their legacies than are the ridiculously cobbled-together major conferences; in terms of historical authenticity, a rivalry between Texas Southern and Alabama A&M makes far more sense than Syracuse and Duke, for pity’s sake. Without the SWAC, and leagues like it, the NCAA tournament would be completely converted, root and branch, to a soulless, ahistorical miniseries every spring. There will always be something special about the Big Dance, if a band like the Ocean of Soul can get the gig.