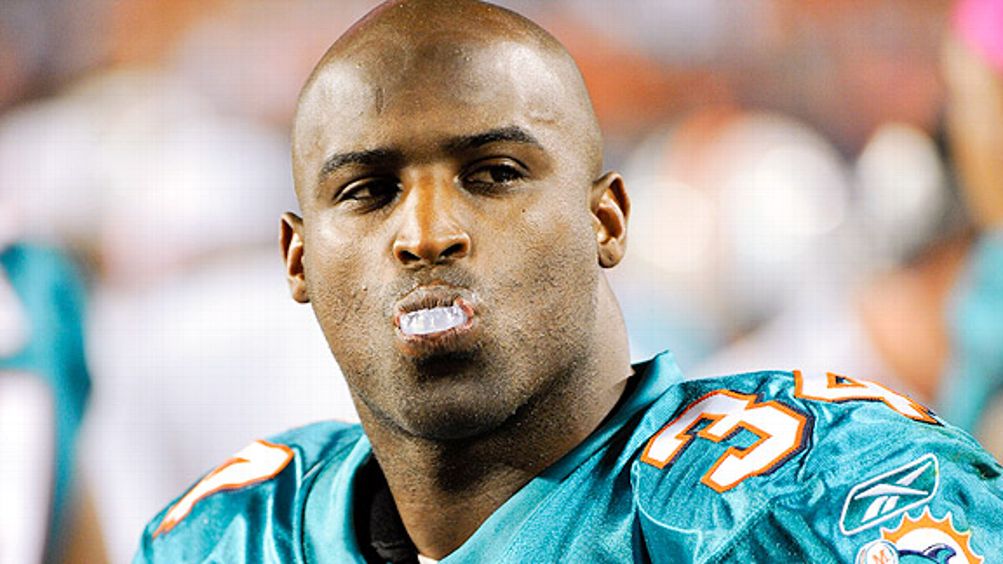 Speculating on NFL free agents is a risky business. With 18 years of the modern free-agency system in the books, you would think teams and their front offices would know whom to avoid. But year after year, contracts whose net worth rivals the GDP of several developing countries are given out to players who have little to no chance of earning out that money.

For general managers, free agency is a minefield. One misstep can cost you your job, your livelihood, and sometimes your soul. (How else would you describe the existential pain of sitting next to Matt Millen in the commentator’s booth?) But never fear! We come bearing information that can help save wayward general managers from themselves. When evaluating NFL free agents, there are certain archetypes that stand out as particularly bad bets. Avoid the following types at all costs.

Without further ado, we present the free agents you meet in hell.

The Veteran Running Back

After a season that saw unheralded backs like Arian Foster and Peyton Hillis break out with elite numbers, it should be clear to NFL teams that running backs are mostly fungible properties. That doesn’t appear to be the case. The Broncos, for one, have been vocal about wanting to add a running back in free agency, compounding their mistake to waste a first-round pick on Knowshon Moreno two years ago. It’s hard to imagine they’re the only interested party.

Spending more than a million dollars or so on a running back in free agency, though, has mostly been a fool’s errand. Last season, the Bears and Chiefs gave free-agent backs Chester Taylor and Thomas Jones, respectively, a combined $10 million for the 2010 season. They were the two least productive running backs in football. The Eagles gave Mike Bell $1.7 million and dealt him to Cleveland halfway through the year. They also re-signed hybrid back Leonard Weaver, only for Weaver to suffer a gruesome knee injury in Week 1. Of the veteran backs who switched teams, only LaDainian Tomlinson approached even a passable level of play. Meanwhile, Danny Woodhead, Ryan Torain, and LeGarrette Blount all bounced around the waiver wire for peanuts.

This wasn’t just a 2010 thing, either. Virtually every outlay given to a veteran back in free agency has failed. Derrick Ward got $6 million in guaranteed money from the Buccaneers in 2009 and lasted one year. His former teammate with the Giants, Brandon Jacobs, re-signed with the team and lost his starting job a year later. During the 2007 offseason, Ahman Green got $6.5 million in guaranteed money for a total of 144 carries in two years with the Texans. The Broncos passed on Green to sign Travis Henry, who got $12 million in guaranteed money and ran for 691 yards and four touchdowns before the team released him to a life of child support payments and drug trafficking. By comparison, the Raiders got off lucky by giving Dominic Rhodes $2.5 million to produce 75 below-average carries. And they signed him only because their $17.8 million investment in LaMont Jordan after the 2005 season proved to be a great way to get 3.8 disgruntled yards per carry. Edgerrin James made that look good, running for 3.6 yards a pop while picking up $25 million from the Cardinals during his three years with the team. James was benched during the team’s 2008 NFC championship season for a fifth-round pick making $430,500, Tim Hightower.

The counterexample every GM will use to try to convince themselves that things will work out is Michael Turner, but even the six-year deal with $15 million in guaranteed money that he got doesn’t look all that great any more. After a superb 2008, Turner suffered through injuries in 2009 and had a below-average DVOA1 in 2010. Considering Turner has been one of the league’s worst receivers at halfback, he needs to be a remarkably efficient runner to justify his salary. Other success stories in free agency, such as Jamal Lewis (Browns, 2007) and Chester Taylor (Vikings, 2006), were also first-season wonders. The last time a team invested more than a million bucks in a free-agent back and got a consistent return was when the Bears snapped up Thomas Jones in 2004. Jones signed a four-year deal worth $10 million and promptly ran for nearly 3,500 yards and 22 touchdowns in three seasons with the Bears. Even if you like Turner more than the numbers do, that’s two impact backs in the past seven free-agent classes. Running backs simply don’t last long enough — running backs who put up a 1,000-yard season since 1983 have only been able to repeat that performance an average of 1.5 times over the remainder of their careers.

The Second/Third Wide Receiver In An Effective Passing Offense

If the past six years of Randy Moss’ career have taught us anything, it’s that a great quarterback and an effective scheme can be even more refreshing than a delicious Inta Juice. Context is king, but teams tend to fall in love with receivers who put up big numbers, even if they’re catching passes in single coverage with three yards of space around them most of the time.

Let’s call this the “Alvin Harper Rule”. After three years as the starting receiver in Dallas across from Michael Irvin in the mid-’90s, the Buccaneers gave Alvin Harper a deal worth $2.65 million per season — just a smidge under the $2.9 million per season that Irvin was earning in the deal he had signed earlier that offseason. Harper caught a total of 65 passes and scored three touchdowns in two seasons before getting cut.

Virtually every time that a team has reached for a Harper-like secondary or tertiary target from an efficient passing offense, it’s been burned. Think Az Hakim with the Lions. Antwaan Randle El with the Redskins. Kevin Curtis’ run with the Eagles (before suffering from testicular cancer and temporarily leaving football). Donte’ Stallworth’s lone season with the Browns (before his manslaughter charge and release). Other qualifying players have seen their careers ended by injury, including David Givens (Titans) and Joe Jurevicius (Browns).

About the only positive is that these teams didn’t trade away valuable draft picks before they got disappointed by their new receiver. Other franchises weren’t so lucky. The Falcons dealt a first-round pick to the Bills for Peerless Price in 2003, and gave him a seven-year deal with a $10 million signing bonus. Price barely surpassed his 94-catch, 1252-yard performance from 2002 with the Falcons, but it took him two years to do it. The Falcons released him after that.

Again, there aren’t many examples of players breaking the mold. Ed McCaffrey broke out after the Broncos signed him away from the Giants in 1994. Andre Rison had a big year after he moved from the Packers to the Chiefs in 1997, but he was really only a free agent because he was an insane person. Jerry Rice had a second act to his career with the Raiders after the 2000 season, but he’s also the greatest player who ever lived. Teams are better off finding the good receivers in bad offenses.

The Defensive End Coming Off Of A Big Year

You pay for the outlier, you get the regression back towards the mean. It’s a phrase tossed around a lot regarding baseball free agents, but it also applies to pass-rushers hitting free agency in the NFL. It’s certainly not complicated: Teams who want to improve a dismal pass rush go after the guy with the biggest sack total. It worked for the Bears and Julius Peppers last year, right?

At best, the answer is “sort of.” Peppers’ sack total actually fell from 10.5 with Carolina in 2009 to eight with Chicago last year. And Peppers certainly helped create sack opportunities for the rest of the team while occupying double-teams, but the Bears’ sack rate (pass attempts divided by sacks) actually fell from 6.6 percent in 2009 to 5.8 percent with Peppers last year. Meanwhile, Peppers’ replacement in Carolina was Charles Johnson, who quietly picked up 11.5 sacks in his first year as a starter.

That’s pretty consistent with the history of signing prominent pass-rushers like Peppers. When a team has signed or traded for a defensive lineman who produced 10 or more sacks in the season before hitting free agency, it has gotten only an average of 7.1 sacks from that lineman in the subsequent campaign. Only 26 percent of the linemen followed up their 10-sack season with another one in their first campaign with the new team. In fact, 20 percent of the ends weren’t able to get past two sacks, thanks to injury or ineffectiveness.

It might seem unfair to knock injured players for a lack of production, but it’s a subtle facet of free agency that some forget about. When you’re paying top dollar for a talented player, part of the reason why is that he was able to stay healthy long enough to get paid. Past health doesn’t guarantee much going forward. Consider Chuck Smith, who put up 58.5 sacks in eight seasons with the Falcons. The Panthers signed him to a five-year, $21 million deal before the 2000 season, ignoring an arthritic condition in his knee while pointing to the fact that Smith hadn’t missed a game in three seasons. He played in a total of two games with Carolina before his knee forced him to retire. The Panthers replaced him, consequently, by drafting Peppers with the second pick of the 2002 draft.

There’s one additional piece of counterintuitive advice: Stay away from the proven pass-rushers and lean towards what might look like the flashes in the pan. If we separate these pass-rushers into guys who had hit 10 sacks multiple times before leaving and guys who had achieved that level just once, the latter group actually outproduces the proven veterans. They averaged 9.1 sacks in their first season with their new teams, while the veterans hit an average of just 6.3 sacks. The potential flashes-in-the-pan were naturally younger, which obviously matters when you’re paying for future performance.

Here’s a good rule of thumb in the NFL: You’re not smarter than the Pittsburgh Steelers. Nobody does a better job of drafting and developing talent than the Steelers, and outside of the Eagles, nobody is more confident about letting their veterans leave while creating opportunities for new talent to come through. That goes double on defense, where the mind of Dick LeBeau is arguably the unit’s most valuable asset.

We went through the past 10 seasons and identified every time a regular starter on the Pittsburgh defense left the team in free agency. Of the 14 players, eight lasted only one season or less with their new teams. Just two of the defenders — linebacker Joey Porter and safety Chris Hope — made the Pro Bowl after leaving the Steel City.

The list gets a little better if you go back through the mid-’90s, when players like Rod Woodson and Kevin Greene continued to play at a high level after they moved out of Pittsburgh, but it’s clear that investing in defenders whom the Steelers no longer want has been a good way for teams to waste their money.