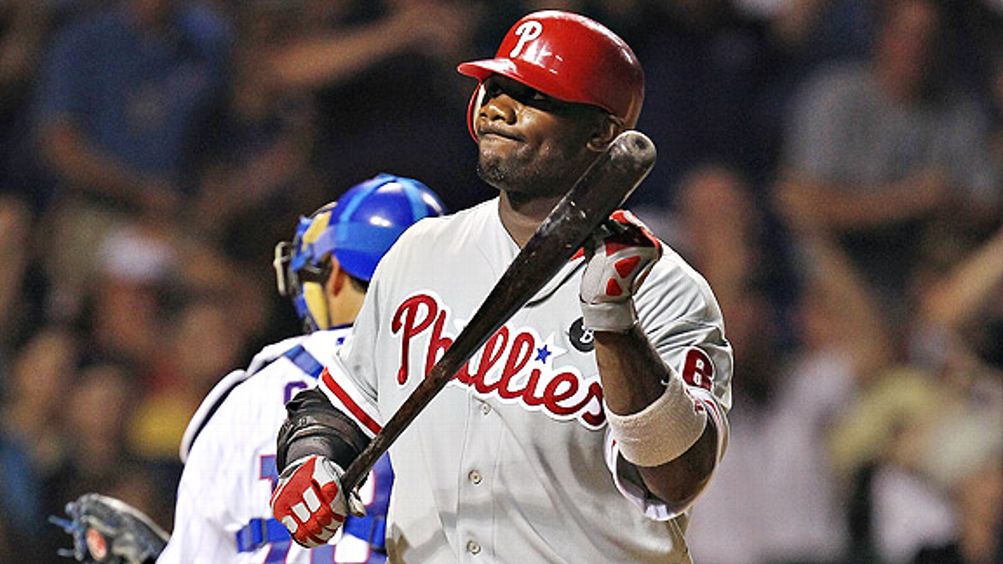 There’s never been a better time to be a Philadelphia Phillies fan. Granted, the bar has been set pretty low.

The Phillies, after all, are the losingest franchise in major league history. They joined the National League in 1883 and won just two pennants in their first 97 seasons. In between, the Phillies went on one of the most sustained runs of futility in professional sports history: From 1918 through 1948, the Phillies had 30 losing seasons in 31 years. (In 1932, they finished over .500 by the narrowest of margins, going 78-76.)

Those teams bear no resemblance to the modern-day Phillies, who followed their 2008 world championship with another World Series appearance in 2009. If they hadn’t lost to the Giants in the NLCS last season, they would have become the first NL team since World War II to win three pennants in a row. And this year, they’re better than ever. At 85-46, they’re on pace to win a franchise-record 105 games, a mark reached by only five NL teams in the past 65 years.

The Phillies’ blueprint for success can be summed up in three words: Acquire elite pitching. Two winters ago general manager Ruben Amaro Jr. traded three top prospects to the Toronto Blue Jays for Roy Halladay. Last summer he sent left-hander J.A. Happ and two second-tier prospects to the Houston Astros for Roy Oswalt.1 This winter he signed Cliff Lee as a free agent. Add them to emerging homegrown ace Cole Hamels and the Phillies had assembled the most heralded rotation since the glory years of Greg Maddux, Tom Glavine, and John Smoltz in Atlanta.

Almost as impressive as Amaro’s ability to construct such a dominant staff was his ability to do so without paying market rate for that talent. Halladay, who had only one season left on his contract when the Phillies traded for him, agreed to a three-year, $60 million extension (with a club option for 2014) as part of the trade. Amaro somehow convinced the Astros to pick up nearly half of Oswalt’s remaining contract, which means the Phillies are paying only $9 million of the $16 million Oswalt is due this year. And Lee was universally thought to be choosing between the Yankees and Rangers until he turned down bigger offers to sign with the Phillies for five years and $120 million.

Great rotations in the spring don’t always pitch that way in the summer, but this one has. While Oswalt has struggled with a bad back this season, Halladay, Lee, and Hamels all rank in the top eight in the NL in ERA. The Phillies seem likely to finish this season as the first team since the 1985 Dodgers to have three starting pitchers with ERAs under 2.80.

While the greatness of Philadelphia’s Big Four was expected, the contributions from some of their teammates were not.

A bullpen that was missing closer Brad Lidge until late July has been excellent. Ryan Madson filled in ably for Lidge with 24 saves and a 3.04 ERA. Left-handed setup man Antonio Bastardo is quietly having a historic season — in 51 innings, he has allowed 19 hits, and opposing batters have hit just .114 against him. That is the lowest batting average in major league history against a pitcher who has thrown at least 40 innings. After fifth starter Joe Blanton hurt his elbow in May, the Phillies recalled unheralded prospect Vance Worley from Triple-A on June 18, and the team has won all 12 of his starts since.

Ten pitchers have thrown 40 or more innings for Philadelphia this year, and Michael Stutes’ 3.78 ERA is the highest of the 10. Add it all up, and the Phillies have a 3.06 ERA as a team, the lowest of any MLB team in two decades. While acknowledging that the postseason is a crapshoot, the franchise is perfectly positioned to win its second world championship in four years.

But even as the Phillies enjoy their lofty perch, there are plenty of reasons to worry about the future.

We’re almost halfway through this column and I haven’t mentioned a hitter yet. There’s a reason for that — the Phillies’ offense isn’t particularly good. After finishing first or second in the NL in runs scored every year from 2005 to 2010, the Phillies have dropped to sixth this season.

At his peak, Chase Utley was better than either Rollins or Howard.2 In 2007, he might have been better than anyone else in baseball, as he hit .332/.410/.566 and played Gold Glove-caliber defense at second base. That Utley was 28; the 32-year-old Utley who currently plays for the Phillies is still terrific, but he has become injury-prone. He sat out 45 games last year and has missed 51 so far this season.

Among the Phillies’ starters, only Shane Victorino isn’t in decline. In fact, he’s having his best season, hitting .308/.381/.543. Not coincidentally, the 30-year-old Victorino is one of the youngest players in the team’s everyday lineup.

Philadelphia’s hitters are getting old all at once. In 2007, when this batch of Phillies first made the playoffs, the average age3 of the offense was 28.8 years old. Three years later, the average age of the Phillies’ offense was … exactly three years older. At 31.8 years old, the 2010 Phillies had one of the 10 oldest lineups in NL history. This year, their hitters are just a tick younger — 31.5. Only a handful of teams in history have fielded an offense this old in back-to-back seasons, and almost all of them paid a price:

It’s possible that the Phillies can afford to do the same. After all, their $165 million Opening Day payroll ranks behind only the Yankees. But the Phillies have already made an enormous commitment to their current squad. Utley makes $15 million next year and in 2013. Ruiz, Victorino, and Polanco all get salary increases next season. And next year Ryan Howard will make $25 million in the final year of his five-year, $125 million contract, which, given his obvious decline, won’t end a moment too soon.

Hah! Just kidding! Howard’s five-year extension actually starts next season. He turns 32 this November, and even before the Phillies have paid a dime on his new contract, it looks like one of baseball’s most bloated. Even at his peak, Howard couldn’t run, wasn’t a great first baseman, and couldn’t hit left-handed pitching. (For his career, Howard has averaged just .233/.312/.443 against southpaws.) He’s in the lineup for one reason — his ability to crush right-handed pitchers. If that talent starts to flicker, Howard will barely deserve an everyday job, let alone $25 million a year.

Throw in the millions guaranteed to Halladay and Lee and even Blanton, and the Phillies already have $113 million tied up for next year. That number doesn’t include what Hamels, in his final year before free agency, will earn. It also doesn’t count Jimmy Rollins, who will also be a free agent after the season. The Phillies will have to decide between re-signing their then-33-year-old shortstop to a long-term deal and trying to find a replacement among a weak free-agent class.

Which brings up another problem brewing in Philadelphia: The team’s farm system, having been used so many times to trade prospects for star players, is just about tapped. Philadelphia’s latest acquisition was outfielder Hunter Pence, whom it received from the Astros at the trade deadline. Pence has justified the deal so far; he’s hitting .330 with Philadelphia and .313/.366/.487 overall this season. Pence is 28. On this team, that qualifies as a youth infusion. But Pence cost the Phillies four prospects, including two elite ones in first baseman Jonathan Singleton and right-hander Jarred Cosart. The Phillies still have some promising arms, but they don’t have a single impact bat left in their farm system. Promising rookie Domonic Brown, who will likely take over for Ibanez in left field next season, is the organization’s only above-average hitter under the age of 28.

Meanwhile, the rest of the division isn’t standing still. Thanks to a spectacularly timed pair of 100-loss seasons, the Washington Nationals signed two of the most hyped prospects of all time in Stephen Strasburg and Bryce Harper. This year, they drafted Anthony Rendon, the best college hitter in America. Add those three to a core of Ryan Zimmerman, Danny Espinosa, Wilson Ramos, Jordan Zimmermann, Drew Storen, and Tyler Clippard — all 26 or younger — and something interesting is brewing in the nation’s capital.

But the Phillies’ biggest concern in the near term is, as always, the Atlanta Braves. The Braves are on pace for 96 wins — their best record since 2004 — thanks to a farm system that continues to belch talent. Last season it was Jason Heyward, who had one of the best seasons by a 20-year-old hitter in decades; this year it’s 21-year-old first baseman Freddie Freeman, who’s hitting .291/.353/.463.

Freeman’s only real competition for NL Rookie of the Year is fellow Brave Craig Kimbrel, who has a 1.67 ERA, 40 saves, and 105 strikeouts in 65 innings. Kimbrel has already set an all-time rookie record with 40 saves this season. Last year’s rookie reliever, left-hander Jonny Venters, has a 1.33 ERA. Atlanta starters Jair Jurrjens, Tommy Hanson, Brandon Beachy, and Mike Minor are all 25 or younger. And waiting in the wings are top pitching prospects Randall Delgado, Arodys Vizcaino, and arguably the most promising minor league pitcher in baseball, Julio Teheran.

If the Phillies are looking for a cautionary tale of what Father Time can do to a team, they don’t have to look beyond their own franchise. As old as their offense is, once upon a time they had a lineup that was even more ancient.

Philadelphia dominated the NL East in the late 1970s; after losing the NLCS in 1976, 1977, and 1978, the Phillies finally broke through with their first world championship, in 1980. Their offense was starting to show its age that year — every regular in the lineup was 29 or older — but the Phillies refused to kowtow to the aging process. Instead, they went out and added more players old enough to run for president, including Joe Morgan and Tony Perez.

By 1983, the team’s offense averaged nearly 32 years old. Pete Rose, then 42, and Tony Perez, 41, split time at first base. Morgan, 39, played second. The only hitter in the lineup who hadn’t already turned 30 was Von Hayes, a right fielder who — sound familiar, Hunter Pence? — the Phillies had traded five prospects to acquire. One of those prospects was Julio Franco, one of the best batters of his generation. To acquire starting shortstop Ivan de Jesus from the Cubs, the Phillies had to surrender another up-and-comer — Ryne Sandberg.

For a while, at least, it worked. The 1983 Phillies, known as the Wheeze Kids,4 won the NL pennant.

The next season, the Phillies finished at .500, and the franchise returned to the playoffs just once between 1984 and 2007.

History will not necessarily repeat itself. So long as Halladay and Lee and Hamels are competing with each other for Cy Young Awards, the Phillies are almost guaranteed to be competitive. But for a team on the verge of its greatest season ever, the future is murky at best. The Phillies have climbed to the top of the mountain. There might be a cliff up ahead.