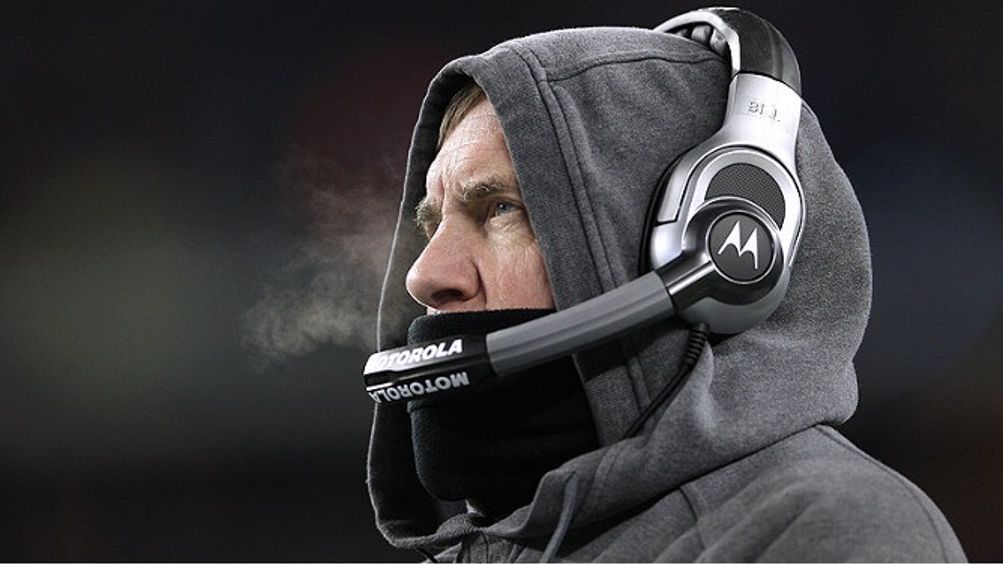 No great idea in its beginning can ever be within the law.
— Emma Goldman

I don’t know if this means anything, but, long about half-past 35-7 the other night in Foxboro, I could’ve sworn I saw a couple of New England Patriots rolling dice for Tim Tebow’s jersey.

(Please forward all my mail to my new business address: CPP, Roasting on Third Spit From the Left, RFD Route 666, Hell.)

Spirited blasphemy of this sort broke out generally long before halftime the other night, as the full measure of the preposterous beating the Patriots were handing the Broncos became ghoulishly apparent. As an alternative to watching what New England was doing to six days of unbearable hype, there was a lot to recommend it. Tim Tebow is a lovely young man, his faith an unquenchable fire. He also throws the ball like Jed Clampett and, facing a defense that did not stupidly line everyone up in the box to stop the vaunted Denver “option offense” — Sell-By Date: November 5, 1951 — he got himself chased out of the pocket on a number of occasions in ever-widening circles until he came dangerously close to standing in a beer line behind the seats in the lower bowl. He is decidedly Not Ready, and that is the sum of him at the moment.

He also unfortunately was facing Bill Belichick on a night when Belichick decided that he would act like Gandalf the Grey beyond simply dressing like him. This was apparent at the 13:50 mark of the first quarter, when the Patriots lined up tight end Aaron Hernandez in the backfield. Along with burly budding teen idol Rob Gronkowski, Hernandez is one of the two gifted tight ends with whom Belichick can make all kinds of monkey mischief on unwitting defensive coordinators. While Gronkowski is a powerful runner with surprising athleticism — his flat-out bobbling touchdown catch in the corner of the end zone was one Andre Johnson would have been proud to claim — Hernandez is a speedy athlete with surprising strength. This gives Belichick a lot of options for creative thinking. So he put Hernandez in the backfield, and the latter cracked one off for 43 yards around the left side of a gobsmacked Denver defense to set up the first New England touchdown.

Then, of course, with three minutes left in the game, at a tense moment with his team leading by a mere 45-10, Belichick boldly had Tom Brady quick-kick from his own 43, pinning Denver back on its own 10, thereby making it more difficult for the Broncos to score the 35-point touchdown it would take to get back in the game. It is entirely possible — nay, likely — that Belichick was just screwing with people here, but isn’t that also part of his charm? Shouldn’t it be?

For years now, the undeniable fact about the National Football League has been that the whole operation is grimly determined to combine the unpredictability of an Amway seminar with the giddy good humor of the North Korean army. This problem has grown especially acute under the recent stewardship of Commissioner Roger Goodell, who seems to imagine himself on a balcony in Buenos Aires, tossing money to the peasants. There was a time, and not so long ago, when the NFL was full to its gunwales with entertaining miscreants of all varieties. Then the Collective assimilated the American Football League, and the steady march toward corporate sports nirvana — i.e., authoritarian tedium on which you can bet — went to the double-quick. Which is why all those people who spend so much time complaining about the No Fun League should embrace Bill Belichick, because Bill Belichick is the NFL’s last real anarchist.

Consider what he’s done just recently. He rehired Josh McDaniels as an offensive assistant immediately before the playoffs, and he did so in such a way that (a) the hapless St. Louis Rams have to keep paying McDaniels, and (b) the rest of the league, and a great many football pundits, screamed in outrage, despite the fact that nothing Belichick did was against any rule anyone can find. Taking advantage of a loophole is not cheating. And even his most egregious moment — the so-called Spygate scandal, which we will not relitigate here because we do not want all our readers to lapse into comas — was little more than sharp practice. He won. He got caught. He got fined nearly a million dollars. And he moved on, even though there are football pundits out there who may never rise from their fainting couches over the whole thing.

What was it that Dylan said?

To live outside the law, you must be honest.

On the field, he’s even more inclined to let his freak flag fly. When he let Brady punt the other night, the call was a mirror of a moment a few years back when he had Doug Flutie drop-kick an extra point against the Dolphins, probably because he knew Flutie was the last player alive who could still drop-kick. The crowd appreciated it, even if the Dolphins didn’t. And, on Saturday night, the Broncos liked what Brady did so much that Von Miller touched off a general brawl by popping Dan Connolly well after the ball had rolled dead. Say what you will about the call, and about the ensuing pleasantries, but at least it kept a ridiculous rout from being ridiculously boring.

And his use of Hernandez as a running back shouldn’t surprise anyone who remembers that this is the coach who turned wide receiver Troy Brown into a defensive back, a move he duplicated this season with Julian Edelman, and that this is also the coach who used to employ defensive lineman Richard Seymour as a running back in his goal-line offense, a move that went badly wrong when Seymour suffered a severe leg injury that compromised his effectiveness for the rest of the time he was with New England.

His masterpiece in this regard was probably his use of linebacker Mike Vrabel as a goal-line tight end. This led to Vrabel’s uniquely magnificent performance in Super Bowl XXXVIII against Carolina, in which Vrabel not only had two sacks and a forced fumble, he caught a two-yard touchdown pass from Brady, thereby putting up the best two-way football game the NFL had seen since the days when Chuck Bednarik was still picking bits of Frank Gifford from between his teeth. “Football players,” Belichick often says, “play football.” This is a man who thinks in one platoon, but with a million different variations. This is something that should be celebrated around a league where the height of creativity elsewhere seems to be finding a better route the bus can take to the stadium.

The problem, of course, is that, while Belichick’s anarchy is evident on the field, behind the podium, he still behaves as though he should be planted on a hillside on Easter Island. Asked the other night about his use of Hernandez as a running back, and whether the talents of his two young tight ends constituted evidence of how the position had evolved, he drew on his profound knowledge of the history of the game, and replied, “Well, there have been a lot of great tight ends in the history of the league.” The rest of the audio was lost in the clamor of a dozen crests falling.

This filters down to the players — even the young ones, like Gronkowski — until they all become fluent in conversational Belichickian, a weird patois of teamspeak and utter banality that you learn to speak in New England, or you go play somewhere else. Here, for example, is the genuinely irrepressible Gronkowski talking about the interesting night that his teammate Hernandez experienced:

Please hit me in the head with a tack hammer now, please. Thank you.

This is what you get — incredibly disciplined players, talking like automatons, but playing in a system in which almost anything is likely to happen on the field, as well as in a system that will gleefully exploit every misplaced comma in the NFL rulebook, which the NFL richly deserves to have happen to it. This has been the great conundrum of the New England Patriots under Bill Belichick — a kind of blessedly refreshing football anarchy explained by its practitioners in stale terms that run the gamut from prosaic to sullen and back again. To concentrate on the latter is to miss the sheer artistry of the former. Bill Belichick, the last NFL anarchist, the Lord of Misrule, gets to tee it up this weekend against Ray Lewis and the Baltimore Ravens. Corporate partners can be found hiding under the bed, where most of them damned well belong.

Previously from Charles P. Pierce:
Short Yardage and the Death of the Falcons
Tebow’s Religion: Fair Game
The Stupidity (and Sexism) of Baseball’s Media Dress Codes
The NCAA and Nostalgia
It Wasn’t (Just) About the Money
The Tailgate and Modern America
The Brutal Truth About Penn State
The Decline of Horse Racing