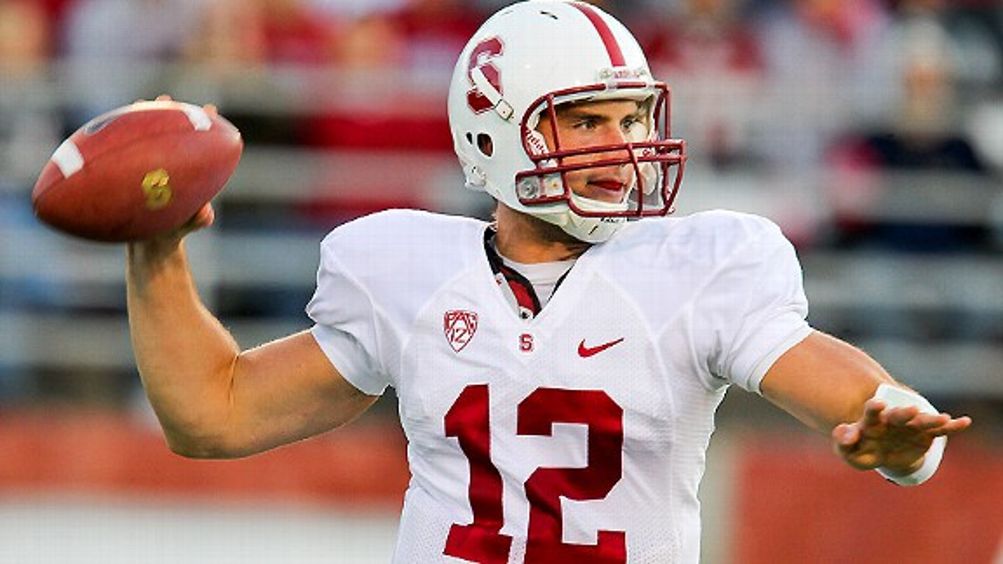 Seven weeks of football have narrowed down the suitors for Andrew Luck to three teams: the Indianapolis Colts, St. Louis Rams, and Miami Dolphins. According to Football Outsiders, which simulates the season 20,000 times after each week to estimate each team’s likeliest record by the end of the season, those three teams have the following odds to get the no. 1 pick: 33.2 percent (Colts), 26.3 percent (Rams), and 24.3 percent (Dolphins). Each of the three has a drastically different situation at quarterback and, therefore, different questions to ask themselves if they end up with the first overall pick. We’re here to break down those questions.

Chances of getting the first overall pick: 33.2 percent

Question: Should the Colts draft Andrew Luck and trade away Peyton Manning?

Before this season, the idea of the Colts trading Peyton Manning might have inspired riots within the skyways of downtown Indianapolis. After their disastrous 2011 season, though, the Colts will have a very slim window to trade their franchise quarterback and acquire arguably the best signal-caller to come out of the college ranks since Manning himself.

The Lewin Career Forecast (LCF), developed by former college quarterback David Lewin (now employed in the front office of the Cleveland Cavaliers), found that completion percentage and games started in college were significant indicators of a quarterback’s likely success at the pro level if that quarterback was selected in the first two rounds of the draft. Although it’s had a few hits and misses, had it existed in 1998, the LCF would have pegged Manning to be one of the best quarterback prospects in NFL history, and suggested that Ryan Leaf was about to become a colossal flop. Manning started 43 games in college and completed 62.5 percent of his passes. If Luck makes it through the rest of the season unscathed, he’ll finish with 39 collegiate starts. Stanford has some tough games left on its slate this year, but Luck’s accuracy can afford to slip a little, as his career completion percentage is at a staggering 66.1 percent. The only quarterback since Peyton Manning to come out with a comparable LCF projection to Luck’s is Philip Rivers. If Indianapolis gets the first overall pick, Luck represents what might be its only opportunity to replace Manning with somebody who can come close to his performance for the next 15 seasons.

Drafting Luck and trading Manning would allow the Colts to begin a rebuilding process with a franchise quarterback and a bounty of extra draft picks, which should hasten their path to respectability. The good news is that the Raiders just dealt a first- and second-round pick for Carson Palmer, a clearly inferior player at the same position. Even at 36 years old, Manning should be able to net a minimum of two first-round picks in a trade.

Trading Manning, of course, is trickier than that. While the Indianapolis fans undoubtedly wouldn’t be as angry about such a trade as they might have been a year ago, it’s not going to make the fans who buy season tickets in Indy’s new stadium very happy. Furthermore, Manning just signed a five-year, $90 million contract extension in February that will see $69 million coming to him in the first three years of his deal. Most teams won’t be able to fit that figure underneath their cap, limiting Manning’s potential market. He also has $48 million in signing bonuses that would accelerate onto the Colts’ salary cap with a trade,1 limiting Indianapolis’ ability to compete in 2011.

So, what if the Colts decided to hold on to Manning? One option is to draft Luck with the first pick and have Manning tutor him for a season before trading him. Admittedly, the idea of Manning teaching Luck is compelling, but it’s a bad idea because the market value of both Luck and Manning will be highest during the 2011 offseason. If the Colts wait a year and Manning plays well, they’ll still be dealing a 36-year-old quarterback in a market in which everyone knows they have to make a trade. Luck, likewise, will be less valuable if he sits on the bench for a year. And if Manning plays poorly, well, there’s no market for a highly paid quarterback in decline.2

Finally, the Colts could choose to keep Manning and not draft Luck at all. Elite quarterbacks have played at a high level as they approached 40 years old in the past, and while that Colts roster is threadbare, they’re not playing in a particularly tough division. Manning could inspire them to a division title next year with the current roster and whatever the Colts would get in lieu of Luck.

Early mock drafts have three quarterbacks going in the top five, leaving the defense-needy Colts with few choices if they were to hold on to the first overall pick and pass on Luck. Clearly, trading Luck for multiple draft picks would be the preferable option if they held on to Manning. How much could they expect to get? We’ll get to that in a bit.

Chances of getting the first overall pick: 26.3 percent

And Rams fans sigh. The Manning option of keeping both quarterbacks clearly isn’t in play here, since there’s no realistic way that the Rams could develop both of these quarterbacks at once. Heck, they’re having trouble just developing Bradford on their own.

While Bradford had a promising rookie season and currently has the league’s lowest interception rate, he was playing pretty terrible football before suffering a high ankle sprain. His completion percentage had fallen from an even 60 percent as a rookie to a gruesome 53.1 percent, and while part of that had to do with a seemingly team-wide policy of dropping passes, Bradford has looked timid and his decision-making has come into question.

His Lewin Career Forecast was promising, as Bradford started 31 games at Oklahoma and completed an impressive 67.6 percent of his passes, but he doesn’t project to be the sort of prospect that Luck does. It’s way too early to give up on Bradford, who has a particularly soft schedule over the second half of the year, but it’s natural to be worried.

Bradford has already spent two years in St. Louis, though, and while he’s struggling to implement Josh McDaniels’ offense at the moment, he’ll have more experience in it than Luck will. General manager Billy Devaney and coach Steve Spagnuolo may very well have their jobs on the line in 2012 if the Rams end up drafting in the top five, and Bradford is likely to be a better player in his third season than Luck will be as a rookie, even if Luck’s the better long-term prospect.

If the Rams did want to deal Bradford, they would also receive significantly less than they would get for Luck. If they end up as the worst team in football and with the first overall pick, it’s also extremely likely that Bradford will have finished the year with a poor season. They will be selling low on their franchise quarterback, which is as bad in real football as it is in fantasy football.

The biggest problem with dealing Bradford, though, is the disparity between his contract and the one Luck is going to receive. Because Bradford signed his deal before the new Collective Bargaining Agreement set in, Bradford is currently in the middle of a six-year deal that guarantees him $50 million. Rookie contracts were brought back to earth by the new CBA. Luck will get a contract similar to the deal signed by Cam Newton, who got a four-year deal that guarantees him $22 million. Teams looking for a long-term answer at quarterback would obviously choose the cheaper, younger Luck over a player who has failed to establish himself during two pro seasons.

Even if the Rams end up with the first overall pick, there’s no way they can draft Luck. They’ll have to trade the pick.

Chances of getting the first overall pick: 24.3 percent

Question: How much will it cost the Dolphins to get Andrew Luck if they don’t end up with the first overall pick?

The Dolphins are the natural landing spot for Luck. While they’re a relatively young team with some talented players to build around, they have nobody to stand in Luck’s way or give them pause about taking Luck with the first overall pick. If they end up with the worst record in football, this discussion is academic.

Three out of four times, though, the Dolphins won’t end up with the first pick. At the moment, they’re penciled in to finish with the third-worst record in football. They could opt to keep their pick and go for Landry Jones or Matt Barkley, but don’t kid yourselves: Bill Cowher and Jon Gruden aren’t coming out of retirement for anyone but Luck. Assuming that the Rams or Colts end up with the first overall pick in those situations where the Dolphins do not, there’s a clear trade match here.

But how much should the Dolphins give up to acquire Luck? The NFL has a draft value chart for just this situation, which we can use as a starting point. For the Dolphins to deal up from the third pick to the first one, they would need to make up 800 points of trade value. That’s equivalent to the value of the 21st overall pick.

Of course, the Dolphins don’t have the 21st overall pick, and the team with the first pick might want more for Luck than they would for the average first overall pick. They can make that difference up by dealing their first-round pick in next year’s draft, but history suggests that the other team will want more. When the Giants dealt up from the fourth pick to acquire first-overall pick Eli Manning from the Chargers in 2004, they had to include their first- and fifth-round picks in the following year’s draft, plus a third-round pick in that year’s gala. The Falcons, on the other hand, didn’t have to give up an additional first-rounder to move up from fifth to first and take Michael Vick in 2001. They dealt wide receiver Tim Dwight, a third-round pick, and a second-rounder in the following year’s draft. Luck is more highly touted than either of those quarterbacks, though.

Our best estimate is that the Dolphins would need to give up the third overall pick, their 2013 first-round pick, and a third-rounder in each of the 2012 and 2013 drafts. That’s about 3,700 points, depending on where those 2013 picks end up. Alternately, they could try to offer the Ricky Williams Special by dealing their entire draft for the first overall pick. That would be worth about 3,200 points, but many teams discount the value of future picks by one round per year, so a first-rounder in 2013 would be worth only a second-rounder to them in 2012. For a team like the Colts, who likely need to turn over half of their roster, an entire extra set of draft picks could be very compelling. Any other team looking to move up from beyond the third slot would be starting with two first-rounders, at least one second-rounder, and either a boatload of later picks or a premium player. And if the Dolphins end up with the first overall pick, it’s hard to imagine any team coming up with a trade offer that would compel them to pass on taking Luck.

Teams in the second tier, like the Vikings, Cardinals, and Jaguars, are unlikely to commit to a quarterback change and a serious investment after either drafting or locking up a new quarterback this past offseason. The only obvious landing point for Luck, then, is Miami. The Dolphins might not have the best shot at ending up with the first overall pick, but one way or another, they are the most likely team to end up with Andrew Luck as their starting quarterback next year.