Welcome to the Mailbag

Question from St. Louis reader Rich Altman: “I’m shocked you had nothing to say, even in passing, about the whole mess with ‘The Contender’ rematch show. Is ESPN’s policy to just sweep it under the rug and hope people forget in time for the second season?”

My answer: Absolutely not! In fact, since it happened at the Staples Center, they gave me ringside seats so I would write about it. I’m that easy.

Some of the highlights from Saturday night … 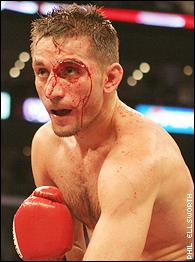 • Sitting 20 feet away from the one, the only, Sylvester Stallone. Sly was sitting in the first row with Jimmy Caan, Burt Young and Ray Liotta, all of whom had a “Hey, I heard you might be making Rocky 6, you know I’m available, right?” glow about them. At the time, we were two days away from the stunning announcement that “Rocky Balboa” would begin filming in December — probably a good thing, since I would have considered strapping on an explosive-filled vest and hurtling myself into Sly’s row to prevent this from happening. But it was fun to stare at Sly for three hours.

Maybe my favorite Sly-related moment happened when Young — who had been sitting in Sly’s row for a solid hour — came over to Sly between fights, talked to him for a couple of minutes, then hugged Sly and kissed him on both cheeks. This was funny for two reasons: First, I’m almost positive that “Young” isn’t an Italian name, so I can only assume that he’s like Caan and appeared in so many Italian-related movies, he’s now convinced he’s Italian. Kinda like Michael Rapaport carrying himself like he’s black. And second, Young wasn’t leaving. After the kissing/hugging routine, he went right back to his seat. I have no idea what this means.

• More celebrity sightings: Two rows back, Brooke Burke sat next to the immortal David Charvet, whose stock has slipped so dramatically, they didn’t even identify him on ESPN’s telecast. (Note to Brooke: If you’re trying to get on the cover of US Weekly with a celebrity relationship, you might want to aim higher up the food chain. My advice would be to show up at George Clooney’s house tonight wearing a mink coat and nothing else. Just trust me.) Ving Rhames was walking around with a big smile, probably dying for someone to make the obligatory, “Hey, saw you get raped by Zed and Maynard on cable last week!” joke so he could punch him out.Eliza Dushku’s boyfriend in “Bring It On” was there, as were Rich Eisen and Jeffrey Ross, who apparently met online at Celebrity Friendster last week. And in the middle of this madness, my ESPN colleague Mario Lopez was wandering around and interviewing everybody for the ESPN telecast.

(Now that is a goofy scene, you have to admit. If only Tony Danza and Bea Arthur had shown up … )

• There’s a social dynamic at boxing matches unlike any other sport: With the long gaps between fights (thanks to the TV interviews and prefight segments), there are these 20-minute windows when the heavy hitters stroll around, make a big deal about each other and introduce their latest trophy girlfriend, or the celebrities feel obligated to exchange a few awkward words like “Did they pick up your pilot?” or “Saw the Star magazine story, you going to sue?” And there were an inordinate amount of women in the good seats, mostly dates or spouses, who had little to no interest in the fights (and I’m being kind). For instance, in our section, the two women to my right were babbling about God knows what during the last two fights, and the two women in front of us were sending messages on their Blackberries. Even the Sports Gal was outraged — she felt like they were setting back the women’s movement by 20 years.

It’s just a weird scene — people there to be seen instead of to see. In other words, it’s just like a Lakers game. We could easily solve this by not allowing women into boxing matches unless they’re wearing a ring girl costume, but I’m not sure this would fly.

• Speaking of the ring girls, ESPN might want to increase the budget on this end — I felt like I was in Cheetah’s at Vegas after about 40 drinks at 5 a.m., on a Wednesday night when the best three girls called in sick. Good golly. The guy in front of us summed it up best when he started singing, “Who let the dogs out? Woof, woof, woof, woof-woof!”

• Hey, did I mention that I was 15 feet away from Sly Stallone? After the unfathomable Anthony Bonsante-Jesse Brinkley decision (Brinkley won in a split), poor Sly turned away with one of those, “Oh, no, this could single-handedly kill the future of the show” look on his face, then whispered, “That was bad, that was bad” to a friend. I haven’t seen him that upset since Drago killed Apollo. (Come on, you knew that line was coming.) I have to say, Sly seemed bummed out for the rest of the night, and with reason — when you create a show that professes to clean up boxing, and that same show gives you one of the worst boxing decisions in recent memory, that’s probably a little upsetting.

(Although it did lead to a furious Bonsante going to see Sly about 15 minutes later, with Sly profusely apologizing as Bonsante kept nodding his head, while I was doing Sly/”Cliffhanger” grunts for the Sports Gal to mimic the conversation. Really, the only thing more fun than muting the TV and grunting Sly’s lines from any Stallone movie is being in the same room with him and grunting his lines from out of earshot. More fun than humans should be allowed, actually.)

• When they announced that Bonsante-Brinkley decision, I felt like I was in the theater when Booth shot Lincoln. Just a stunning sports moment, regardless of the admittedly dopey circumstances (a rematch of a reality-TV show boxing match). Even when they were announcing the scores, two of the judges scored it 47-46 (three rounds to two) and I remember thinking, “How in God’s name could anyone give Brinkley two rounds?” Then they gave him the fight!!!! Since this was only my second live boxing match (and the first one with good seats), I have never been in an arena when everyone collectively made the “Wait, what the hell just happened?” sound, followed by a reign of boos and the obligatory chant that involves bulls and their excrement. I can’t even imagine the sound after a championship fight in Vegas, with much bigger stakes and more people gambling on the outcome, if a boxer was robbed that egregiously.

(Here’s the funny thing: Bonsante was lustily booed coming into the ring because he was somewhat of a villain on the show. Leaving the ring, he was cheered like a conquering hero. In a weird way, that crazy decision was the best thing that could have happened to him.)

• The Sports Gal’s quote of the night, as she watched Jesse Brinkley’s wife barking “Whooo! Whooooo!” during the Bonsante fight: “They should start spraying her with a water bottle to calm her down — she’s like a wild animal.”

(And no, she wasn’t joking. Reason No. 834 why Sly should fight Mrs. Brinkley at the end of “Rocky Balboa.”)

• Fight of the night: The wildly popular Alfonso Gomez beating up some random fill-in who wasn’t on the show (and ended up taking some heavy hits as well). I can’t properly describe how much more entertaining boxing is in person — there isn’t a more dramatic difference between watching TV/watching it live in any other sport. For one thing, every punch resonates in person — you don’t realize how much punishment these guys take until you see it live. And the crowd sways with every punch and every shift in momentum, almost like riding a roller coaster or something. It’s crazy. I can’t say enough about it. Had I seen Castillo-Corrales in person with good seats, I honestly feel like my head would have exploded. I wouldn’t have been able to deal with it. Hell, I could barely handle Sergio Mora-Peter Manfredo Jr. II. 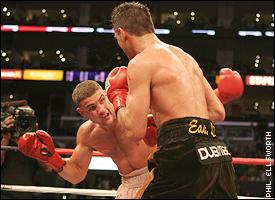 • Another thing I liked about being there in person: In every fight, there’s an alpha dog of sorts. For instance, when my two dogs are play-fighting, Rufus is always the aggressor because he’s the alpha dog male, so he’s almost like Julio Cesar Chavez — he keeps coming forward and never lets up, and he’s always willing to cross the line with an ear bite or even a paw bite. (Note: The paw bite is one of the all-time no-nos when dogs are play-fighting. Of course, Roofie doesn’t care because he’s a cheap-shot artist. He’s like the Claude Lemieux of dogs.) Meanwhile the Dooze is like Roy Jones Jr. — dances in and out of danger, hates trading punches, content to rely on her superior quickness — so she spends most of the time on the ropes (in this case, on her back) counterpunching and trying to keep Roofie off her. Occasionally, she flips out and lays the smack down — flipping Roofie over, grabbing him by the scruff of the neck and whipping him around — but that only happens like once a day.

Here’s the point: Roofie isn’t even remotely afraid of Dooze, but Dooze always has that look on her face like, “Oh, boy, here we go, the Little Man is crazy, I hope this doesn’t escalate.”

And that’s what Manfredo looked like during the last few rounds of the Mora fight. Maybe it seemed like he was controlling the fight on TV, but in person, he reminded me of the Dooze — technically superior, but somewhat wary of trading punches with Mora and having the fight turn into a full-scale donnybrook. On television, it seemed like Manfredo controlled the fight and cruised to a decision. In person, Mora was landing much harder blows and I don’t remember Manfredo fazing him once, whereas there were three different rounds (most notably the fifth) when Mora was rocking him. When it ended, I predicted a split decision with Mora winning 77-75 on the last card, which freaked out the Sports Gal and led to a night of “Seriously, how did you know that?” questions.

So imagine my surprise when I sifted through e-mails on Sunday … and everyone was complaining that Manfredo was robbed. Honestly, it didn’t seem that way in person at all. I’m telling you. Now I’m wondering how dramatic the difference is between watching any fight on TV and being there in person. For instance, I always thought Sugar Ray Leonard did enough to beat Marvin Hagler, and that Hagler’s sloppiness (all the missed punches, the way he allowed Leonard to finish every round with a flurry) caught up to him. But some writers who were there swear that Leonard didn’t even come close to hurting him, and Hagler’s punches seemed more damaging in person. Eventually, it became one of the all-time unsolvable sports arguments because people feel so strongly either way, right up there with “How many titles would the Celtics have won with Lenny Bias?” or “Was Steffi Graf pretty?”

And since I was such a huge Sugar Ray fan back in the day, I always pooh-poohed those people and thought, “Come on, Ray dominated that fight, what are you talking about?”

Now? I don’t know. Maybe Hagler did win the fight. But that’s a column for another day.

Bill Simmons is a columnist for Page 2 and ESPN The Magazine and his Sports Guy’s World site is updated every day Monday through Friday. His new book “Now I Can Die In Peace” is available right now on Amazon.com and in bookstores everywhere.