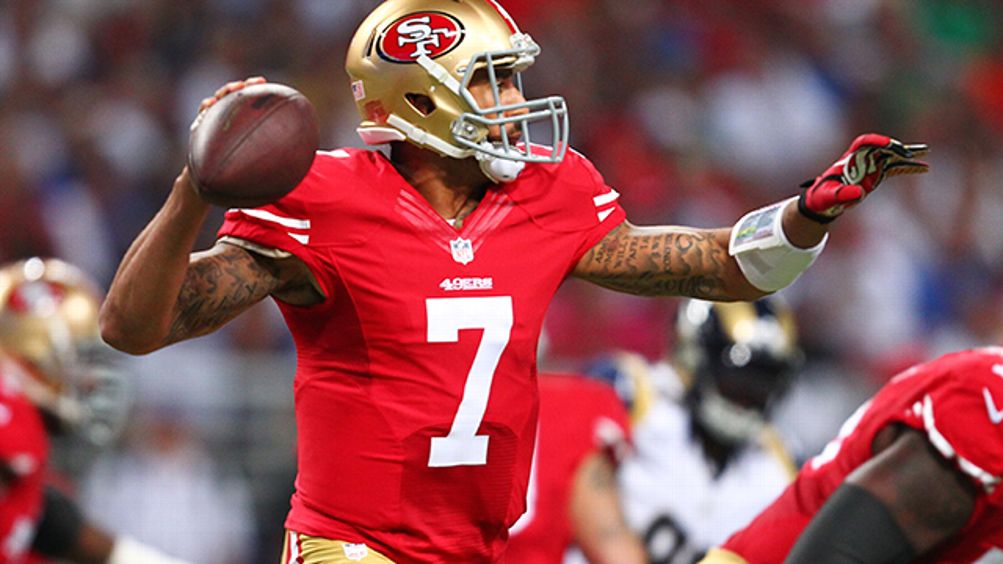 The sky apparently forgot to fall inside the Edward Jones Dome. After a week of chatter about how Colin Kaepernick had fallen off and how the 49ers weren’t an effective offense without the read-option, San Francisco responded on Thursday night with a 35-11 beatdown of its division rival in St. Louis. In doing so, the 49ers exposed many of the worst-case scenarios in St. Louis’s rebuilding project under Jeff Fisher while reestablishing their credentials as a team capable of physically overwhelming the opposition. I still don’t think the San Francisco attack is quite in full swing, but with their defense, Kaepernick & Co. might not need to be.

I don’t know that San Francisco got back on track as much as merely reorganized things on offense. During last week’s humiliating loss to the Colts, the 49ers enjoyed a great amount of success running the ball out of conventional sets during the first half, with Frank Gore carrying the ball eight times for 70 yards before halftime alone. After the half, the 49ers got away from the running game. San Francisco ran the ball just seven times during the final two quarters, picking up a mere 13 yards in the process.

On Thursday, the 49ers got back to running the football. While some of their cumulative carry numbers derive from the Niners having a big lead in the second half and caring more about killing clock than scoring, San Francisco was consistently able to pound the ball in the first half, and then came back to the run to finish off the game just after halftime. Gore had 107 yards before the break and finished with 153 yards on 20 carries, his best performance of the year by a significant margin. The Niners in total ran for 219 yards across 40 carries.

Furthermore, they were able to succeed without using the read-option, which has been a wildly irrelevant topic of discussion with regard to the team this year, despite what you might have read elsewhere. The 49ers have barely used the read-option this year. That doesn’t mean that the read-option is dead, either; read-option usage is up around the league, and while it has been less effective than it was a year ago, read-option runs are still averaging five yards per carry. The 49ers haven’t made it a focus so far this season, but it seems naive to believe that they won’t bring it back as a surprise for a key game or situation once opponents have let it slip out of their minds.

They’ll also probably want to implement it with a more confident Kaepernick, and building up the faith of their third-year passer was part of the game plan on Thursday. The 49ers built in a bunch of plays at the beginning of the game with safe checkdowns for Kaepernick, and on the first two third downs of the game, Jim Harbaugh called for a draw and a bubble screen, conservative calls designed to discourage his young protégé from pressing. It’s worth repeating that, for all his success last year, this was still just Kaepernick’s 14th professional start. Kaepernick still made a couple of dangerous passes over the middle that could have been intercepted by a slightly quicker (or luckier) defender, but he was much more functionally accurate on his throws, which suggests that he underwent some remedial mechanics work during this short week. Kaepernick is still going to go through some growing pains, but it’s a little early for the “WE WANT COLT” chants.

The bigger concern for the 49ers, in terms of this season, is how they handle this glut of injuries to key players. San Francisco has been a remarkably healthy team under Harbaugh, and this is really the first time they’ve been dramatically affected by a series of injuries to notable contributors at the same time. On defense alone, the 49ers were without All-World linebacker Patrick Willis (groin; return uncertain) and starting nose tackle Ian Williams (broken ankle; gone for year), along with nickel corner Nnamdi Asomugha and the absent Aldon Smith.

The offense is already missing wideout Michael Crabtree, who is gone until at least Week 11 with a torn Achilles, and tight end Vernon Davis was rushed back into action Thursday after missing the loss to Indy with a hamstring injury. Davis wasn’t at 100 percent, and the chances that he’ll reaggravate the injury while playing at 75 to 80 percent are very high. At the moment, the 49ers need his blocking ability and the threat of his speed as a receiver on the field. It seemed like they suffered another serious loss at the end of the game on Thursday when star left tackle Joe Staley went down screaming in pain after having Eugene Sims roll up on his leg from behind, but Staley was apparently in good shape later and escaped serious injury.

With all these injuries, it really hurts that San Francisco got so little out of its 2012 draft class, which is shaping up to be a famously bad failure. Of the seven players the Niners drafted, exactly one — second-round pick LaMichael James — is on the active roster. Fourth-round guard Joe Looney has been inactive for his entire pro career, and everyone below him was either released or traded. San Francisco had no third-round pick and used their first-round pick on A.J. Jenkins, who was traded to the Chiefs in August after the Niners gave up on him. Had Jenkins stayed healthy and lived up to his potential, he might very well be starting right now for San Francisco. Instead, he’s on the back of the Chiefs’ roster.

The final score does hide that the Rams were competitive during the game’s opening minutes and could even have scored the game’s opening touchdown had Sam Bradford hit an open Austin Pettis on his way to the end zone. Instead, the Rams kicked a 40-yard field goal to go up 3-0 and then allowed 28 consecutive points. St. Louis had some early success throwing the ball on third down, but the 49ers were able to guide them back toward mediocrity with some excellent work by their pass rush. With Willis and Smith missing, the 49ers blitzed more frequently than they have in the past, and they got a mammoth game from inside linebacker NaVorro Bowman. Serving as the defensive leader with Willis out, Bowman led the defense and accrued superstar numbers himself, finishing with two sacks, three tackles for loss, a pass breakup, and a forced fumble. That doesn’t even include the plays Bowman blew up or rushed to a conclusion with his pass pressure. Nose tackle Glenn Dorsey, an offseason signing filling in for Williams, also chipped in with a sack and some stout work against the run. The Rams were without right tackle Rodger Saffold all day and lost left tackle Jake Long for a good chunk of the action, which helps explain some of the pass-protection woes for the Rams.

In many ways, this game brought to light the worst-case scenarios for each of the major roster moves the Rams have made over the past couple of seasons. Take Daryl Richardson, the young halfback who has taken over as the primary back with Steven Jackson departed to Atlanta. Richardson might have more big-play potential than Jackson, but he’s far less reliable and consistent; on Thursday, Richardson was made to look downright foolish while getting beat repeatedly in pass protection.

And he wasn’t the only one. Tavon Austin, the eighth overall pick in the 2013 draft, was supposed to be one of the quickest players on the board. As Chris Brown noted on Twitter yesterday, the Rams haven’t yet integrated Austin and his variety of skills into their playbook; that was brutally clear on Thursday, when Austin was thrown the ball eight times and caught just two passes, gaining a total of six yards in the process. Jared Cook was supposed to be the speed threat who would stretch opposing defenses vertically. He rarely did that on Thursday, when his most notable play came on an ugly whiff as a pass blocker. Bradford also had to contend with the absence of either one or both tackles throughout the day, which couldn’t have helped. St. Louis was barely able to run the ball, with its three backs combining for more carries (19) than yards (18). The Rams’ free-agent investments on the line — left tackle Jake Long and center Scott Wells — were manhandled on Thursday. They even had their big free-agent signing from 2012, Cortland Finnegan, allow a number of big plays against Anquan Boldin before leaving with a thigh injury.

With all that said, the most disappointing player was Bradford. Bradford did make a few nice throws and had consistent, effective footwork as a passer, but he struggled to throw defenders open and rarely looked for an option downfield. Virtually every one of his throws came within 15 yards of the line of scrimmage. This problem has existed in St. Louis since Bradford arrived and has alternately been blamed upon his old offensive coordinators and the relative paucity of speed amid his old receivers, but Bradford now has a group of wideouts with a big-money tight end and a top-eight draft pick and can’t do much of anything in terms of big plays. By the middle of the third quarter, Bradford and his offense were receiving catcalls by every second down and enduring loud boos every time they walked off the turf.

And, by the end of the night, I was back to thinking about the biggest difference between these two teams: what they spend on their respective quarterbacks, and what that allows them to do elsewhere. The Rams will give Sam Bradford $9 million this season; he will make more money per game than Colin Kaepernick will make between the beginning of the season and December. By contract, Kaepernick will make about $600,000 this year. That $8.26 million difference was enough for the Niners to make brief forays into the veteran free-agent market, and they came away with two key contributors. The Niners fit Anquan Boldin (via trade) and Glenn Dorsey (unrestricted free agent) into the cap at a combined cap figure of $8.2 million, and while they might be able to fake things without Dorsey around, they would be in tatters offensively if it weren’t for Boldin and his ability to make cornerbacks look foolish. Next year, they won’t be able to make those same sort of moves, since Kaepernick’s contract will be in its final year and the Niners will surely try to re-sign him to a big contract extension. This win told us that San Francisco’s championship window is still open in 2013, but as I saw what they did against the Rams and their overpriced quarterback and noticed all those injuries, I wondered whether the window will close on San Francisco far quicker in the long term than any of us are thinking right now.