30 Rock Landed on Us 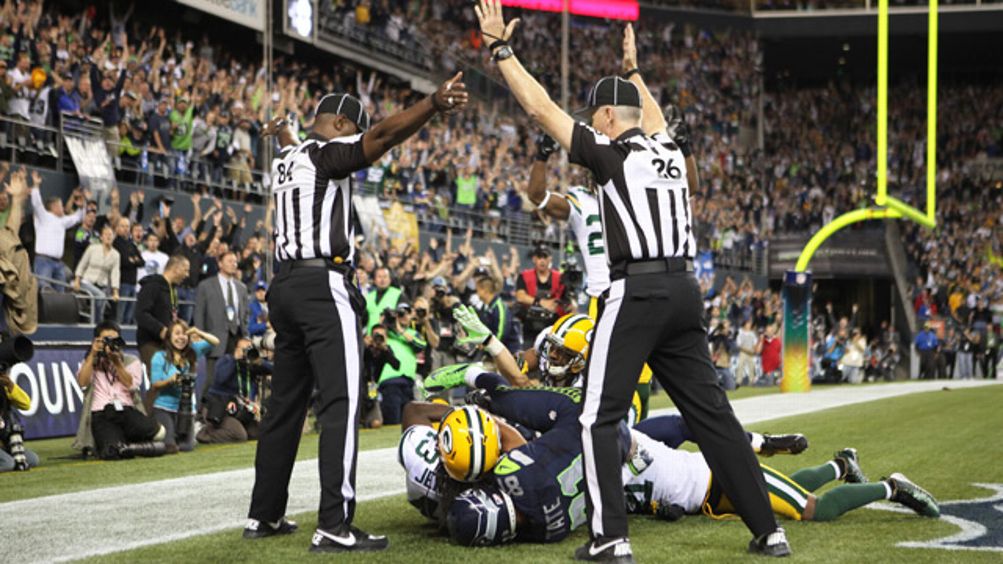 Last year, the NFL Honors made their debut on the Saturday night preceding the Super Bowl. As a vehicle to distract from the stench of the Pro Bowl, the only football activity that was taking place during the two-week downtime between the Conference Championship games and the Super Bowl, it was a smash hit. This year’s event will be exciting for a number of reasons: Alec Baldwin is hosting again, Roger Goodell will appear before a crowd in New Orleans, and we have a number of award races that have some genuine intrigue behind them.

So, today I’m putting my Super Bowl analysis to the side for the afternoon and putting together my ballot for the NFL Honors. Sure, the Associated Press and the NFL might not actually have asked me for my opinions, but I’m still going to throw in my two cents. I’ll skip the Salute to Service and High School Coach of the Year Awards, controversial as they might be, and start with the truly obvious pick for Play of the Year that probably doesn’t have a prayer of winning.

Play of the Year

The NFL wants to relive that moment like you want to relive your first breakup on a loop, but no single play from the 2012 season will live on longer in the memories of NFL fans than Tate’s infamous non-catch against the Packers on Monday Night Football. You remember the repercussions, as it brought the replacement official issue to a head and forced the league to abandon its negotiating stance. It ended up affecting the playoff picture, too; the Packers could have locked up home-field advantage in Week 17 if that loss had been turned into a win, while the 49ers could have rested their players in Week 16 without having to worry about the Seahawks catching them.

If the NFL really didn’t want to commemorate the most embarrassing play of the season, the biggest and most memorable play of the year would probably be Joe Flacco’s touchdown pass to Jacoby Jones that extended the Broncos-Ravens playoff game while eventually pushing the Ravens past Denver and New England into the Super Bowl.

And on the flip side, if you wanted to create an award for Worst Play of the Year, you would probably opt for the infamous “butt fumble” by Mark Sanchez. That is, of course, the one where Sanchez tries to hand the ball off to a back who isn’t in the backfield, sprints toward the line of scrimmage, and is separated from the football when he smacks his head against the ass of Jets guard Brandon Moore. The Patriots then returned the fumble for a touchdown. A pick-12 might serve as the worst quantitative play of the year, but it’s hard to top the butt fumble for sheer agonizing stupidity.

Comeback Player of the Year

I don’t think these two guys should share the MVP award or Offensive Player of the Year, but in terms of the effort exerted for them to come back from devastating injuries, I don’t think there’s anything wrong with splitting the vote here. More on them later, as you might expect.

Head Coach of the Year

I wrote about Harbaugh’s brilliance and how he deserves Coach of the Year for a second consecutive season in last week’s Thank You for Not Coaching awards. I don’t need to rehash those nice things again here, but suffice it to say that my feelings haven’t changed after seeing him organize the media day team photo.

Bruce Arians is probably going to win this award because he filled in for his stricken colleague, Chuck Pagano, and went 11-5 after the Colts were 2-14 a year ago. I don’t think Arians did a bad job, by any means, but the change in Indianapolis’s record drastically overstates their actual level of improvement. They’re a team that rode a hot stretch of close wins against mostly terrible teams into the playoffs.

You know who was the last guy to make a similar sort of leap with a similar sort of lucky run against an easy schedule? Tony Sparano with the Dolphins in 2008, when he took a 1-15 team to 11-5 by getting a massive upgrade at quarterback and going 7-1 in games decided by a touchdown or less against one of the five easiest schedules in football. Does anybody look back on the Tony Sparano era in Miami and think that he was a great coach? I think we’ll look back on Arians’s season at the helm in Indianapolis the same way in a few years, even as he has moved on to Arizona.

I think the race for DROY boils down to a two-man battle between Kuechly, who became the leader on an improving Carolina defense, and Packers cornerback Casey Hayward. (Vikings safety Harrison Smith and Buccaneers linebacker Lavonte David trail in third and fourth, respectively.) When Kuechly and Hayward were playing at their peak levels, I think Hayward was better. He looked like a franchise cornerback at times for the Packers, and while six interceptions as a rookie will always get attention, Hayward stepped in on a veteran defense that had cornerbacks who were either injured (Sam Shields, semi-corner Charles Woodson) or not living up to expectations (Tramon Williams) and produced like the unit’s best defender at times.

So why do I put Kuechly over Hayward? Because Kuechly’s volume of work surpasses that of Hayward. As a part-time starter in Green Bay, Hayward only saw 683 defensive snaps this year, 63 percent of Green Bay’s total. Kuechly, meanwhile, was on the field for 921 defensive snaps, which is 88 percent of Carolina’s total. The Boston College product started the year as an outside linebacker, but when the team gave up on an ailing Jon Beason and sent him to IR, Kuechly moved into the middle and became the force of nature his college tape hinted toward. Carolina’s run defense improved from 18th in DVOA in the first half to seventh in the second half, and Kuechly was a big reason why. He was the one who had the green dot on his helmet, aligning the defense and running things on his side of the ball. Carolina depended on him in a way that Green Bay didn’t depend upon Hayward. To me, that’s enough to make him DROY.

Let’s assume a three-man race between Wilson, Andrew Luck, and Robert Griffin, and break down each of the “matchups” between the players.

Griffin vs. Luck: Griffin wins because Luck’s biggest calling card as a rookie — his win-loss record on a team that was a loser last year — is just about matched by Griffin. Luck’s rate stats (completion percentage, yards per attempt, and interception rate) are far inferior to Griffin’s, but Luck threw 627 passes to Griffin’s 393. Volume matters. On the other hand, Griffin also ran twice as frequently as Luck did and averaged far more yards per carry, which makes up for some of the passing gap. Luck also played with Reggie Wayne, while the best Griffin got was a limited-by-injury Pierre Garcon. It’s closer than the numbers indicate, but Griffin was the better player this year.

Wilson vs. Luck: Wilson’s numbers make him a slightly inferior candidate to Griffin, whose statistics he emulates in almost every way — down to the same number of pass attempts and completion percentages within 1.5 percentage points of one another — but Wilson threw interceptions on 2.5 percent of his passes, which was twice Griffin’s total and much closer to Luck’s 2.9 percent figure. Wilson also unquestionably had the best defense to work with of the three, even as he looked like the best player in the bunch by the time the season ended (and then during the playoffs). I’d give this very slightly to Wilson.

Griffin vs. Wilson: No, really, look at how freakishly close these numbers are:

Griffin takes this one because of what he offered outside the passing numbers. He was a better runner, more efficient and effective from week to week than Wilson. Both players had great running games to work alongside, but you would choose Wilson’s bevy of receiving options over Griffin’s if you had a chance. Wilson also got superior field position from his elite defense, while Griffin got by with an inconsistent group on the other side of the ball. Griffin missed about a game and a half of snaps due to injury, but the slight volume argument isn’t enough to overcome Griffin’s higher level of play across the entire season.

What Watt did as a 3-4 defensive end is virtually unprecedented since the NFL began to adopt that 3-4 front. For a player at a position and in a role where pass-rushing skills are considered a bonus, 20.5 sacks is stunning. Watt knocked down 16 passes and created 23 stuffs in the backfield for a loss, each of which ranks among the league leaders. It was one of the most impressive seasons you’ll ever see an interior lineman have, as Watt single-handedly kept a defense that experienced quite a few disappointing seasons from 2011 breakout players (Johnathan Joseph, Brooks Reed, Connor Barwin, the injured Brian Cushing) in the top six in terms of DVOA.

The only player on Watt’s level as a defender this year was Geno Atkins of the Bengals.

Since naming one spoils the other under the bizarre unwritten rule that the MVP can’t also win Player of the Year on his side of the ball, let’s do them both. It seems pretty clear that Manning and Peterson will split these two awards, but the actual split is still up for debate.

What Peyton Manning did this year was truly impressive. He came back from a year off and looked better than he had before leaving. He dramatically improved the Denver offense and helped push two young receivers into superstardom. Whatever disappointing work he did in the playoffs shouldn’t matter for this MVP award.

At the end of the day, though, Manning had a very good season for a quarterback, one that left him as the best quarterback in a year in which no passer had a truly stunning season. Adrian Peterson, on the other hand, had a transcendent statistical outlier of a season. He put on the sort of performance in terms of combined volume and efficiency that we should expect to see once every 30 or 40 years from a running back. He did that with a middling quarterback, an inexperienced offensive line, and no wide receivers of any note for half a campaign. Peterson raised his game against a tougher schedule during the second half, and played his best football when his team desperately needed it at the end of the season.

Peyton Manning was the best. Adrian Peterson made us reexamine our definitions of what the best could actually be. For that, he’s the rare running back who deserves to be NFL MVP.