Your Moment of Zone 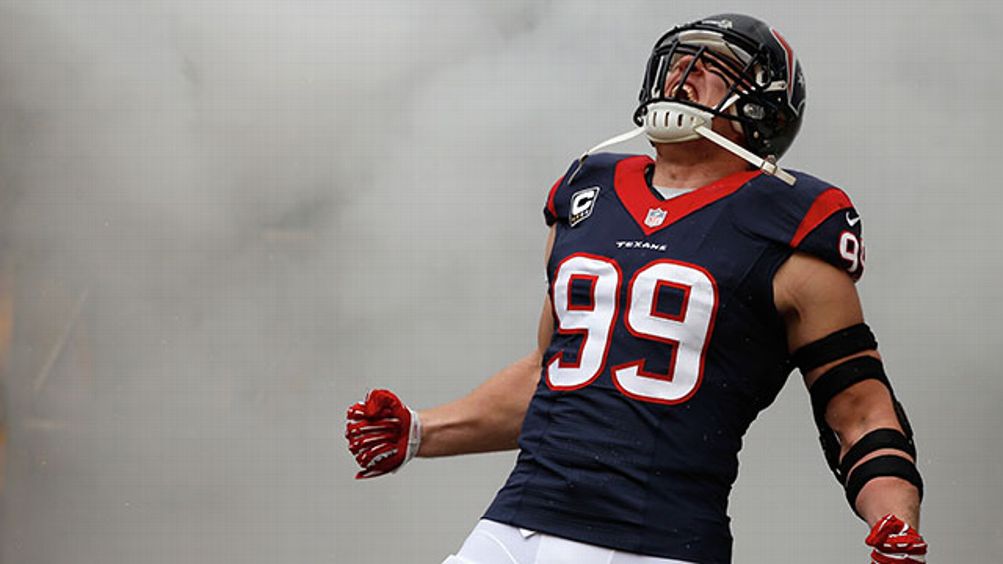 Swept by the Jaguars. That ignominious title phrase is attached to the 2013 Houston Texans, who couldn’t overcome a two-touchdown deficit and a staggering 177 yards in penalties on Thursday night. Their 27-20 loss to the Jaguars in Jacksonville dropped the Texans to 0-2 against the Jaguars and 2-11 altogether this season. While the Jaguars celebrated an improbable win streak in their locker room, the Texans will return to Houston on the heels of their 11th consecutive loss.

It’s going to get worse for Texans fans, but then it is going to get better. Perhaps quicker than it might seem right now. The last time the Jaguars beat a team twice in one season came in 2011, when they beat the Colts in Week 10 before finishing up the job at home in Week 17. Indianapolis’s loss in Jacksonville that day locked up the no. 1 pick in the 2012 draft for the Colts, who used it to take Andrew Luck. That’s gone well for them. And if you’re looking for reasons to believe that the Texans are going to turn things around quickly, well, start with the fact that the Jaguars might just have done their divisional brethren the very same favor.

Heading into this week, Football Outsiders suggested that the Texans had a 59.7 percent chance of ending up with the first pick in the much-ballyhooed 2014 draft, with no other individual team enjoying odds above 10 percent. That figure will only rise after this loss; the Jaguars, who had an 8.9 percent chance of claiming the top pick, will now find it virtually impossible to claim a top spot that seemed surely theirs just a month ago.1 Houston is now 2-11, leaving it 1.5 games “ahead” of Atlanta, Tampa Bay, and St. Louis (via Washington). Its remaining schedule is brutal; the Texans travel to play Luck and the Colts next week and then host the mighty Broncos. It seems extremely likely they’ll be 2-13 heading into their season-ending trip to Tennessee.

As the Texans were picking up their 11th loss of the season, the consensus choice as the likely first overall pick in the 2014 draft was leading his team to its 11th win of the year. Louisville quarterback Teddy Bridgewater isn’t regarded as a surefire prospect the same way that Luck was during his final season in school, but he’s been regarded as the top pick in the draft for most of the 2013 college campaign. The easiest way for a bad team to get better fast is to massively upgrade at quarterback, and given how disappointing Houston’s set of quarterbacks have collectively been this year, even an average season from Bridgewater could be worth several wins.

If the Texans don’t like Bridgewater, of course, they can settle for the once-in-a-generation freak pass-rusher instead. South Carolina’s Jadeveon Clowney hasn’t produced the sort of dominant season that might have been expected from him after The Hit, but he is still expected to produce double-digit sacks on a yearly basis as a pro. The Texans wouldn’t be the best fit for Clowney, since they currently play a 3-4, but they could draft Clowney and either choose to play him at outside linebacker or move to a 4-3, which would allow them to line up Clowney alongside J.J. Watt, already the most feared lineman in the league.

Or they could try to pick up the best of both worlds. With the first overall pick in a draft where there’s a true franchise quarterback available, the Texans are sure to field juicy trade offers reminiscent of the haul that the Rams received from Washington in the Robert Griffin III deal. Maybe Houston trades the first pick to the Rams for their two first-round picks and ends up with Clowney and, say, local star Johnny Manziel. The point is that the Texans have options. Part of rebuilding quickly is getting a really high draft pick at exactly the right time. The Texans appear to have pulled that off.

The numbers suggest that Houston is a pretty bad football team, if perhaps one not quite as terrible as its record might indicate. The Texans were 30th in DVOA heading into the week, but they were closer to league-average than they were to the 32nd-ranked Jaguars.2 They were 28th in Pro-Football-Reference.com’s Simple Rating System. And even after losing 11 freaking games in a row, their point differential is a mere minus-100, which is better than the Jaguars (minus-178) and Jets (minus-123).

The Pythagorean expectation suggests that the 2-11 Texans have the point differential of a team that should really be 4-9, and while there certainly doesn’t seem to be much joy in “deserving” to be a four-win team in December, that gap is usually an indicator of impending success. The 2012 Lions were the only team in football to underperform their point differential by that large of a margin, eventually producing a 4-12 record with the point differential of a 6.5-win team. As with the vast majority of teams with that large of a gap from year to year, the Lions have been much better this season; Detroit is already 7-5 and likely to win the NFC North.

Those Lions also have a lot in common with this year’s Texans. Detroit started off the year exhibiting competence before collapsing, although its competent run lasted a lot longer; it began the season 4-4 before losing its final eight games of the season. More notably and meaningfully, the Lions rarely got blown out during that losing streak. They were competitive with a number of talented teams, including, coincidentally, the Texans. Of those eight losses, five were by seven points or fewer.

That has also been true of this year’s Texans. During this 11-game losing streak, the Texans have been blown out only three times, with the Ravens, 49ers, and Rams laying a beatdown on them before Halloween. Their other eight losses have all been by one touchdown or less. Houston’s two wins at the beginning of the campaign were also in one-touchdown games, meaning that Houston is now 2-8 in games decided by one score or less in 2013. That just doesn’t carry over from year to year. In fact, if you want proof of that, the best example might very well be last year’s Texans; with virtually the same roster,3 last year’s Texans were 5-0 in games decided by one touchdown or less. There’s no guarantee that the Texans will go back to an undefeated record in close games next year — they’re not “due” to win a ton of them — but the chances that they’ll be this bad in close games next year are close to negligible.

You may have noticed that the Texans are a bit sloppy with the football. While Bill Belichick longs to bench the entire Houston team, the Texans are stuck with Matt Schaub or Case Keenum slinging possible interceptions for them the rest of the way. Their turnover differential is a grotesque minus-14; through 13 weeks, only the Jets are worse.

Houston’s offense has gotten much of the attention for its turnovers this year, but it’s actually been more of a defensive problem. The Texans have just five interceptions this season, the league’s lowest total. They’re 24th in giveaways, 26th in interceptions, but and they’re 32nd in takeaways. Whoever plays quarterback for Houston next year will turn the ball over less frequently, but the defense will almost surely create more takeaways.

The Texans are also less likely to allow opposing defenses to score touchdowns on them. Schaub’s issues with pick-sixes went viral earlier this year, and after T.J. Yates allowed a long pick-six during his brief stay with the team, it became the battle cry of the rebuilding republic. The Texans have now allowed opposing defenses to score six times on them this year, which is wildly frustrating and very unsustainable. Again, remember that virtually the same roster went out during the regular season a year ago and didn’t allow even one defensive touchdown. Last year’s defensive-touchdowns-allowed brigade included Arizona (seven), Philadelphia (seven), Detroit (six), and Kansas City (five). Opponents have a combined six defensive touchdowns against those four teams this year. That could very well be Houston next year.

Every team has injuries, but the Texans have a particularly brutal stack right now. On offense, they lost Schaub, Arian Foster, Owen Daniels, and even star tackle Duane Brown for lengths of time. On the flip side of the ball, even beyond the nagging injuries to Watt, the team lost stars Brian Cushing and Danieal Manning for the season. The Texans will still deal with some injuries in 2013, but they’re among the most snakebit teams in the league this year.

How Soon Is Now?

All this isn’t to say that the Texans are necessarily locks to win 10 games and the AFC South next year; a lot of things have to go right around a rebuilding job like this for the returns to be seen so quickly. That said, the successes of the Colts and Lions should buoy Houston spirits. The Texans are bad now, but their path to relevance is shorter — and will be traveled quicker — than that of many other bad teams.