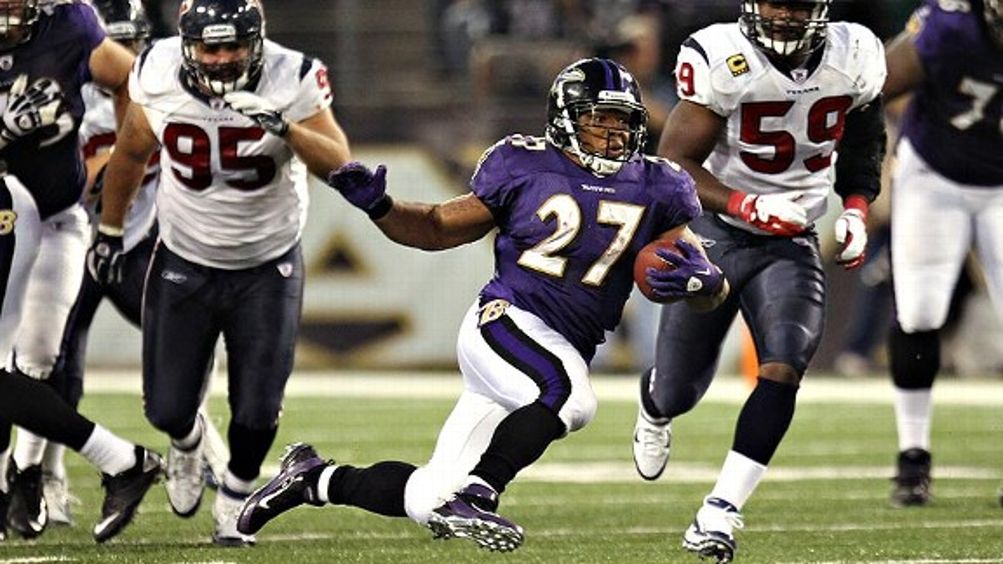 Well, this one should be easy. The Ravens dominated the Texans in Week 6, winning 29-14 in a game that saw one of their touchdowns come on an (offensive) fumble recovery in the end zone. The Texans recovered a fumble of their own, never turned the ball over, and forced Joe Flacco into both an interception and a fumble. Teams with a turnover margin of plus-two, as the Texans had in this game, were 56-9 this season. And yet they still got stomped!

That game was also with Matt Schaub at the helm. On Sunday, the Ravens will get to play a Texans team with rookie T.J. Yates under center, and they’ll have the healthiest version of their team on the field since training camp. So just punch in “rookie quarterback on the road versus an elite defense,” refer back to the near-blowout from the first game, project a 20-plus point win for the Ravens, and go to lunch, right?

Maybe that’s true. On the other hand, the Texans have Andre Johnson after missing him during that Week 6 loss, and based on what we saw from him during the wild-card win over the Bengals, Johnson might be close to 100 percent. It’s also not as if Baltimore’s starting a clearly superior quarterback; Joe Flacco’s completion percentage and yards per attempt were both below Yates’ figures during the regular season, and he threw interceptions about as frequently. Flacco will be playing at home, but the Texans have a top-five defense to throw at him, too. If Schaub was playing, the narrative surrounding the possibility of a Ravens loss would revolve around the idea of Bad Flacco showing up; just because we might see Bad Yates doesn’t mean we won’t also — or alternately — see Bad Flacco.

But if the Ravens really dominated the Texans at home, how did they only come away with a 15-point win?

The Ravens couldn’t get it done on Houston’s side of the field. Baltimore scored a touchdown on their opening drive of the game, but it took them four plays from the 1-yard line to do so. Fortunately, Texans end Antonio Smith committed two personal foul penalties to give Baltimore the extra chances they needed. He would not be so kind after that, and the Ravens would struggle to even sniff the goal line the rest of the way.

Baltimore was able to get within field goal range after that opening drive, but they failed to pick up much more than that. From their second drive on, the Ravens either picked up a first down or took over the ball after a failed fourth-down conversion on six different occasions inside the Houston 40-yard line. From those six opportunities, the Ravens picked up one touchdown and five field goals. It’s good that they always scored, but it’s also disheartening for Ravens fans to see how easily they were stopped. Baltimore picked up just one additional first down on those six drives; five of them were stopped after the Ravens ran three plays that gained a total of six yards or less.

The biggest reason they were stalled: The Ravens couldn’t keep the pass rush off of Joe Flacco. The Texans, who were playing their first game without Mario Williams, sacked Flacco only two times in 35 dropbacks. Those statements are at odds! They also knocked him down on eight other occasions, and he was forced to scramble to some extent on most of his pass attempts. Connor Barwin almost had a monster game, with four knockdowns of Flacco that could have become four sacks with even a quarter-second more time to work with. The troublesome thing is that the rushers were often coming free; that suggests that Flacco was struggling to identify the rushers before the snap and/or failing to adjust his pass protection properly. Expect Ravens defensive coordinator Wade Phillips to dial up a fair number of exotic blitzes on Sunday in the hopes that he can force Flacco into a few more mistakes.

On the other hand, Phillips is going to have to hope that he gets more out of his secondary, since Flacco absolutely torched the Texans when he got the ball away. Disturbingly, it wasn’t Kareem Jackson or Jason Allen getting beat. It was star corner Johnathan Joseph, who had his lunch handed to him by Anquan Boldin. Joseph followed Boldin around the field all day, so the vast majority of Boldin’s work came against the Pro Bowler. Despite Joseph’s presence, Boldin caught eight of the nine passes thrown to him, producing 132 yards and seven first downs. Six of those plays, including a 56-yarder, clearly came with Joseph as the primary cover man on Boldin. Flacco also found Torrey Smith on a 51-yard deep post when safety Danieal Manning was induced to jump the wrong route, clearing out a huge swath of space over the middle of the field for the rookie-burner. If the secondary can’t hold up, Phillips will have to stop the blitzes and keep more players back in coverage. Was it a fluke of a bad game for Joseph, or did he get worked by a superior wideout? We’ll find out on Sunday.

Baltimore was able to hold on to the lead in the second half by running the ball effectively. In the first half, Ray Rice picked up just 16 rushing yards on eight carries. The lone Baltimore first down during that half from the ground game came from fullback Vonta Leach. Suitably chastened, Rice came back in the second half and ran for 85 yards on 13 carries, including three for 10 yards or more. He struggled in short yardage, but some of that likely has to do with the absence of guard Ben Grubbs, who missed the game with a turf toe. Grubbs missed six games during the first half of the season with the injury, and in those six games, the Ravens averaged just 3.8 yards per carry. In the other 10 games, with Grubbs active at left guard, the Ravens averaged 4.6 yards a pop. Rice failed to score a rushing touchdown in four of the six games Grubbs missed, but he scored at least once in six of the ten games Grubbs started. He’ll be a huge upgrade on the presence of Andre Gurode from the first game.

The first game between these two ranked among the least effective offense performances of the year for the Texans. Scoring 14 points against the Ravens on the road without their best offensive player doesn’t sound like the worst thing in the world, but let’s take a closer look. Houston scored on one drive after a Flacco fumble gave them the ball on the Ravens’ 17-yard line. Their other score came on their one truly effective drive of the game, which went 80 yards in six plays to give them a one-point lead in the third quarter.

Otherwise? The Houston offense was close to putrid. The biggest problem, notably, is that they couldn’t stay on the field. On their first two drives, Houston moved the ball 38 and 35 yards, respectively, before punting. They accomplished that by converting five of six attempts on third down, including a 16-yard run on a draw by Arian Foster on third-and-15 in the Texans’ opening drive. After that, Houston went 1-for-13 on third down. Their only other third-down conversion of the day was on that isolated touchdown drive in the third quarter. That’s unreal, and we have to imagine that the Texans will do a little better on third down with Andre Johnson around, even if Yates is under center. In addition to his 40-yard touchdown catch against the Bengals, Johnson picked up two key conversions on third down this past Sunday.

The Ravens also had a fair amount of firepower on the bench during that first game. While they certainly didn’t have anyone quite as important as Johnson out, they probably wouldn’t have allowed Jacoby Jones to pick up 76 yards and a touchdown if cornerbacks Jimmy Smith and Chris Carr weren’t inactive. They’ll both be back for Sunday’s game, as will utility safety Tom Zbikowski, who appeared to be a question mark after a late-season concussion. The Ravens don’t have a no. 1 cornerback like the Texans do, but they might be deeper in the defensive backfield than any other team in football. The Texans can stretch teams when receivers the likes of Jones, Kevin Walter, and Owen Daniels go up against nickel-and-dime defensive backs, but Baltimore has the ability to keep up with the Houston personnel if the Texans choose to go pass-happy.

Of course, it’s more likely that the Texans will try to rely on a heavy dose of Arian Foster and Ben Tate to ease the responsibilities heaped upon Yates’ shoulders. That didn’t go all that well during the first game, even with Schaub under center. The Texans averaged just 3.8 yards per carry on first down and a flat 3.0 yards per carry on second down, with seven of their 21 carries in those situations going for one yard or less. Outside of Foster’s 16-yard run on third-and-15, the Texans produced just two other carries for 10 yards or more (none going longer than 12 yards), and their running game accounted for a total of just four first downs on the day. Part of that was Baltimore’s ability to dominate at the line of scrimmage with the massive bodies of Haloti Ngata and Terrence Cody, but it also has something to do with how effective and disciplined the Ravens linebackers are. Foster picked up several big plays against the Bengals last week when the player responsible for backside1 contain abandoned his responsibilities in an attempt to make a big play. With great blocks from tackles Duane Brown and Eric Winston, Foster was frequently able to cut back and pick up extra yardage by going against the grain of the play. The Ravens are far savvier and much more disciplined; it’s hard to imagine that Foster will be able to get away with more than one or two big cutbacks on Sunday. Houston was also stopped twice on fourth down, including a key fourth-and-1 on the Ravens’ 20-yard line in the second quarter. It will be interesting to see if they go for it in a similar situation this time around.

The Ravens got five field goals in the first game from kicker Billy Cundiff, who otherwise went just 23-of-32 on the season. After a career season in 2010 that saw him pick up touchbacks at a record pace, Cundiff has barely gained anything from the new kickoff rules this year. His touchback percentage has gone from 50 percent to 57 percent, but because the rest of the league has shot up, he’s gone from leading the league by a wide margin in touchback percentage to finishing sixth in the league this year.

Cundiff was just one problem on a Ravens unit that ranks out as below-average across the board. As disappointing as Cundiff’s been on kickoffs, Sam Koch has been even worse on punts, as his work has cost the Ravens 7.7 points of field position this season. Of course, when a respected kicker-and-punter combination struggles, it’s probably worth assigning some of the blame to their coverage units. Opposing teams have scored on two punt returns and one kickoff return against the Ravens this year. The Texans, naturally, will hope for a big play out of Jacoby Jones in the punt game.

As much as we enjoy poking holes in popular perception, there’s not a lot to like about the Texans’ chances here. If these two teams hadn’t already played, we would say that the Texans needed a game where the Ravens turned it over a bunch and gave Houston a few short fields to work with, but that already happened with a superior Texans quarterback, and Houston lost by 15 points. Barring a total meltdown from Flacco, Houston’s run ends here. Baltimore 27, Houston 13.