Bill and Jalen Analyze Talent for Durant and Harden 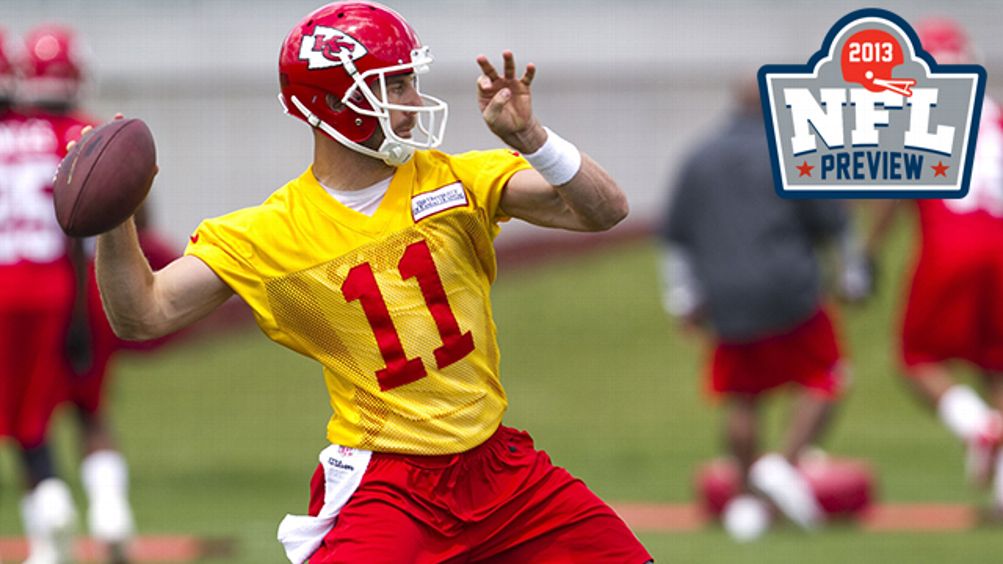 You get the idea. Teams are supposed to rebuild from a truly awful season in a slow, linear fashion: a few wins the following year, one or two more the subsequent season, and then the burst into a 10-win contender during the third season. The post-winless Lions went that route, but most teams don’t. They improve in fits and starts, often when you least expect them to. Since 2002, when the league moved to its current divisional setup, 36 percent of teams that finished with a 4-12 record or worse in a given season followed that performance with a .500 or better campaign. The average 4-12 or worse team over that time frame has improved by an average of 3.6 wins the following season. Bad teams often get better fast. These Chiefs seem very likely to be a team that will approach .500 this season, and there are reasons to dream about an even higher ceiling in Kansas City.

The 2012 Chiefs weren’t unlucky in the traditional ways that I talk about luck in these sorts of pieces. They had the Pythagorean expectation of a 2.6-win team and went 2-3 in games decided by one touchdown or less. They played a league-average schedule and were 22nd in Adjusted Games Lost, the Football Outsiders injury metric, suggesting they were just a little less healthy than league average. Those are the statistical indicators of a bad football team that played down to its level of performance.

There are other subtle indicators that suggest the Chiefs actually were very unlucky. They recovered just 33.3 percent of fumbles that hit the ground in their games, the third-lowest rate in the NFL. Fumble data is available from TeamRankings through 2003, and before 2012, just six other teams had recovered less than 35 percent of the fumbles in their games over that time span. The following year, those six teams recovered an average of 53.7 percent of their fumbles. Kansas City had more giveaways and fewer takeaways than any other team in football on a per-drive basis last year, tying them with the Eagles for the worst turnover margin in football.

Turnover margin doesn’t stick from year to year.1 The 17 previous teams that had at least 20 more giveaways than takeaways since 1989 collectively had what comes close to a league-average turnover margin — minus-1.9 — the following year. And there are tangible reasons to think that the Chiefs will be better. They’ll likely force more fumbles and surely recover more of the ones that hit the ground in their games, which should eliminate a few giveaways and add a few takeaways in itself. They’ve also added a quarterback who specializes in avoiding turnovers.

Alex Smith isn’t a fantastic quarterback, even if his numbers in a closely coached system in San Francisco from 2012 suggest that he was playing like one. Having your running game average six yards per carry makes it awfully easy to pass. In comparing Smith to the combination of Matt Cassel and Brady Quinn, though, Smith looks like a superstar. This is one of Bill Simmons’s favorite indicators of a possible leaping team: upgrading your quarterback from replacement-level to league-average. Replacement-level in this context means a quarterback who plays about as well as a street free agent available for the league minimum might in the same context.

The Kansas City quarterbacks were just about that bad: They were last in the league in interception percentage, third worst in yards per attempt, sixth worst in completion percentage, and next to last in passer rating. When they faced third downs in two-touchdown situations2 and passed, the Chiefs succeeded just 25.4 percent of the time, with only the Cardinals playing worse. Once Quinn took over for good in Week 11, the Chiefs converted just 16.1 percent of third downs in that type of situation. The Cardinals were somehow lower, at 13.6 percent, but nobody else in football was below 27 percent.

That’s how Smith can help without having to be a superstar. If he can extend two more drives per game with third-down conversions — getting the Chiefs closer to league-average — that’s an improvement in scoring and in field position for the defense if the Chiefs do eventually punt. Cassel and Quinn combined for 20 picks last year, and that was in a shockingly conservative system with the consistently execrable Brian Daboll at the helm.3

Smith will get to work with new Chiefs head coach Andy Reid, whose quarterbacks (notably Donovan McNabb, A.J. Feeley, Kevin Kolb, and Michael Vick) have each looked significantly better while they were under Reid’s tutelage than they have in other stops around the league. It remains to be seen whether Reid will try to build a conservative offense around Smith, as Jim Harbaugh did in San Francisco, but the comments of offensive coordinator Doug Pederson should suggest a lot. Pederson called Smith “the best [quarterback] in the league” last week, and reports from Chiefs camp have suggested a Reidesque emphasis on the passing game, but one actually challenging Smith to be aggressive and make throws downfield. There was even a several-day stretch at camp in which the team exclusively worked on passing plays at the expense of running plays.

The Chiefs should also be better in the red zone, where they were truly dreadful last year. Just 27 percent of Chiefs possessions that made it to the red zone produced a touchdown, the lowest rate in the league by a staggering margin. Arizona was in next-to-last place, but at 40 percent, they were closer to 18th-place Minnesota than they were to last. The 27 percent figure is the worst since at least 2003, the point at which TeamRankings no longer holds red zone data, and it’s one of just four times over that stretch when a team managed to fall under 30 percent.

The good news is that red zone performance from year to year can be pretty random. The 2006 Raiders responded to their under-30 season by scoring touchdowns on 60 percent of their red zone possessions the following year, while the 2005 Cardinals and Browns each got up past 46 percent, only a few points below the league average of 52 percent. I realize it’s weird to suggest that somehow employing Andy Reid could produce a marked improvement in a team’s red zone performance, but the Eagles actually scored touchdowns on 52 percent of their red zone tries from 2003 to 2012. The Chiefs will almost surely be in the low 40 just by sheer regression to the mean, and if they can hit league-average, the improvement could be drastic. That alone could add 40 points to their scoring total.

Kansas City’s defense wasn’t quite as awful as its offense last year, but it was still pretty bad despite somehow sending three players (Tamba Hali, Derrick Johnson, and alternate Brandon Flowers) to the Pro Bowl. It should also be better this year. Last year, the secondary fell apart after Brandon Carr left for Dallas, as replacement Stanford Routt quickly lost favor and was released halfway through his first season with the team. This year’s additions4 should find it difficult to be any worse. Former Dolphins cornerback Sean Smith was one of the most underrated starters in football over the past two seasons, and at 26, he should still have a little bit of improvement in him over his three-year deal. The team also brought in ex-Falcons starter Dunta Robinson, who will contribute as a nickelback and possibly see a few snaps at safety by the end of the year. The perpetually disappointing Glenn Dorsey was replaced by Mike DeVito, who is familiar with the system of new defensive coordinator Bob Sutton from their time with the Jets, and they have a burgeoning star in outside linebacker Justin Houston, who had a team-high 10 sacks last year. Dontari Poe has looked like a devastating nose tackle in camp after making one of the most difficult sacrifices imaginable for a Kansas City resident: giving up barbecue. They aren’t deep on defense, but the starting 11 could be one of the 10 most talented units in football.

They should also enjoy a relatively easy schedule. The AFC West isn’t exactly the league’s toughest division, and the Chiefs also get to play the NFC East and the league’s worst division, the AFC South. By virtue of finishing in last place, they’ll finish their slate against the Bills and Browns. Their schedule is very comfortable to start: Before their Week 10 bye, they’ll play the Jaguars, Titans, Raiders, Browns, and Bills. They get the Eagles in Week 3, when Philly still might be struggling to figure out the Chip Kelly scheme, and host their three toughest games against the Cowboys, Giants, and Texans. They could be the surprise team of the league through 10 weeks.

Of course, morphing from 2-14 into a competitive team is really tough. I’ve named a lot of things that should bounce back or play up for the Chiefs, but bounce-back is a vague concept. If the Chiefs improve from league-worst in a bunch of categories to only below-average, that might help them improve to just 5-11 or 6-10. If they get from league-worst to league-average across the board, they could jump up to 8-8. And if they have a season in which many of the things that went wrong for them last year actually go right and improve to above-average, as was the case for last year’s Vikings and Redskins, they could very well be the team that jumps up to 10-6 and claims an unlikely playoff berth in a wide-open AFC wild-card race. It might seem too soon, but history tells us that there’s no such thing as too soon.