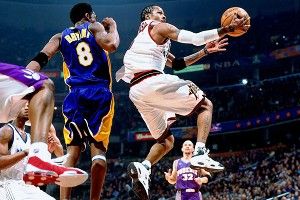 According to former Slam editor-in-chief Tony Gervino, the cover of the March ’99 issue came about during the NBA lockout. The magazine did not want to use a current jersey and had decided to go for a retro look. The cover was inspired by a photo Gervino had seen of Julius Erving with his hair picked out. At the time Mitchell & Ness was a small athletic-wear manufacturer in Philadelphia. Gervino knew it had some retro-styled jerseys and asked if he could borrow a Sixers uniform for the shoot. Iverson showed up several hours late and argued over the choice to let out his braids. But when he saw the proofs, Iverson recognized the potential of that ’70s look. The throwback jersey era, led by Mitchell & Ness, started shortly afterward.

There’s an argument to be made here that all Iverson did was turn the condemnation of the “hip-hop” athlete, whatever that means anymore, into a spectacle and that no real progress has been made. In response, I would ask whether the era when sportswriters openly used the word “thug” to reference athletes they had never met was somehow preferable to today’s occasionally discomforting parade of fetishized NBA players. It’s an interesting argument, for sure, but one that feels extremely dated and almost beside the point right now. Nearly anyone who plays in the NBA now can be embraced by a large segment of the fan base. This, alone, seems like reason for celebration.