Game 6: And the readers have spoken

Rockets come out flying in L.A. 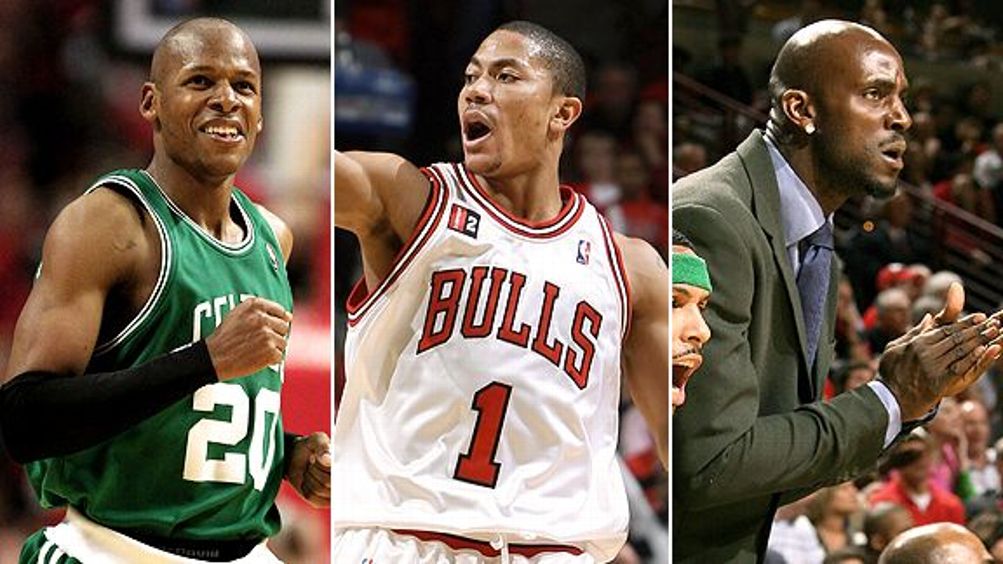 I measure excruciating losses by the amount of time I walk my dog afterward. That’s my ritual. My team gets crushed, I walk it off. The walks usually last for 15-20 minutes. The walk after Game 6 lasted for hours. I think I ended up in Compton.

At one point, Rufus just stopped. He had enough. It was like 9:45 at night. We were in the middle of nowhere. We were like 250 blocks from my house. I think we were on the same street where Ricky Baker got gunned down in “Boyz n the Hood.” Rufus planted his furry butt on a sidewalk and stared me down.

“I’m not going back until you explain to me why Doc put Tony Allen in the game,” I told him.

He kept staring at me.

“We were up by five,” I said. “We had scored on like 10 straight possessions. We were humming. They couldn’t stop us. The series was over.”

“Two and a half minutes left and we have the ball. Again, they can’t stop us. So Doc brings in our worst player — our least intelligent player, our most ineffective player, the master of the fantastic drive/missed layup — and takes out Big Baby when he was our second-best player tonight? And all because Chicago went small? SO WE’RE REACTING TO A DESPERATION COACHING MOVE BY VINNY DEL NEGRO!!!!! REALLY, THAT’S WHAT WE DID?????????”

More staring, coupled with some panting.

“And then, Tony ends up missing back-to-back shots and Chicago ties the game???? And it goes three overtimes and we lose because we make two straight 3-pointers with our toes on the line, then a WNBA player dunked on Paul Pierce, then we went to a guy shooting 4-for-47 on the deciding play when we have the best clutch shooter in the league and he had 51 points?”

At this point, I honestly expected Rufus to say something. Everything was in play, even talking dogs. We are watching a first-round series in which five of the first six games have come down to the final play. Four of those games went into overtime. One went into double OT. One went into triple OT. It’s the wildest first-round series ever played. Whatever happens in Game 7, we will remember it as one of the most incredible matchup in NBA playoff history.

Derrick Rose took the superstar training wheels off. Rajon Rondo turned into Isiah Thomas, The Sequel: Just as talented, just as hated, just as nasty. Ben Gordon and Kendrick Perkins turned into Andrew Toney and Robert Parish. The great Ray Allen became a minus-130 favorite in the “Reggie Miller versus Ray Allen” argument and might have to change his name to “The Great Ray Allen.” Paul Pierce added to his legacy and sullied it a little at the same time. Brad Miller made the Faces Hall of Fame and the Dorkiest White Guy Celebrations Hall of Fame. John Salmons and Glen Davis put themselves on the map as bona-fide NBA players. Kirk Hinrich redeemed his career. Stephon Marbury destroyed what was left of his career. Doc Rivers and Vinny Del Negro inspired their players and undermined them at the same time.

There were so many great plays and shots and moments that they have all blurred together. I’ve watched every second of this series and cannot remember how many clutch shots Ray Allen nailed over the past five games. The number might be nine. The number might be 15. The number might be 23. I couldn’t tell you. They have all morphed into one super-duper clutch Ray Allen shot: The man flying off a screen, lulling his defender to sleep, then springing for his shot with perfect form. He is the greatest pure shooter I have ever seen. Ever. Not since Bird has anyone given me the feeling, “We might be down three, but we are absolutely tying this game.”

I watched every moment of this series and can’t remember how many times Derrick Rose wheeled into the lane, spun one way or the other and either scooped in a layup or a floating one-hander. He does it again and again and again. He does it whenever he wants. Thank God, Vinny hasn’t noticed. I have never seen a better athlete play point guard. It wasn’t that he blocked Rajon Rondo’s game-winning shot in Game 6 as much as how beautiful the play itself was: Rose sniffing out the move, mirroring everything Rondo did, then jumping like a frog and swatting the shot as cleanly as you can swat a shot. A perfect basketball play. That’s what it was.

There are many great things about sports, but here’s one of the best: You never know when two teams will click. I used a boxing analogy in my column after Game 2, and it still stands. Styles make fights and styles make playoff series. Has to be a constant tug between young and old, unstoppable and stoppable, physical and finesse, experience and inexperience, fast and slow, big and small, stupid and smart. You need guys continually rising to the occasion and pushing themselves to a level they didn’t know they had. You need two teams (or fighters) hugging each other afterward and thinking to themselves, “Thank you. You brought out the best of me. Thank you.”

We love sports for the simple reason that we never know when this will happen. It rarely does. We watch a lot of crummy games. We watch sporting events that had potential to be great and weren’t. We watch sporting events that almost made it, but one dumb thing happened to screw it up: A foul at the wrong time, a penalty, a two-base error, whatever. We keep watching. We keep hoping. And when everything clicks, it’s blissful. I am hearing from people who haven’t e-mailed me in years. Readers are sending me 700-word e-mails. The thing that keeps jumping out: Even fans without rooting interests have gotten swept up in this series. How can you not?

Think of all the crap we deal with as fans. “Bulls-Celtics 2009” explains why we put up with every story about Clemens and Bonds and Michael Vick and Terrell Owens and everyone else who conspires to make sports less fun. On the same day of Game 6, a story broke that Alex Rodriguez was allegedly seen with human growth hormone. The story was digested and consumed in the same predictably brief cycle: Mainstream Web sites and blogs and message boards and sports radio first, then “PTI” and “Around the Horn,” then “SportsCenter,” then newspapers and magazines. You can either throw yourself into that cycle or look the other way. I am getting older. I just want to watch sports. I have trained myself to look the other way. This stuff clutters my brain, and not in a good way. I just want to watch sports. I just want to watch sports.

So yeah, that’s why Celtics-Bulls meant something to me — just like Warriors-Mavs meant something two years ago. My team won the title last year. I’m only one year into a five-year grace period. I thought I was playing with house money. I never imagined a Celtics series in 2009 would matter this much to me. I never imagined being that crestfallen after a Round 1 defeat. When Noah stole the ball from Pierce and dunked on him, I threw a tantrum like a little kid. I screamed out a slew of F-bombs. I ran outside my house and screamed some more. How could the 2008 Finals MVP commit such a dumb foul? He had five! Didn’t he know he had five???? And what’s worse than a Jo-No celebration at the expense of your own team? I screamed and screamed and screamed. That play ripped my heart out.

At the same time, I’m glad I still care. I’m glad it still matters. I will always appreciate this Bulls team because they did the impossible: They made a fan base that just won a title care even MORE about their own team. Last season barely matters right now. All that matters is winning the most incredible playoff series ever played. I don’t even care what happens after Game 7; we can’t beat the LeBrons anyway. This is our NBA Finals. Right here. The Celtics fans feel that way, and so do the Bulls fans. I can promise you.

I thought about all of these things during my marathon walk. And this, too: When I was 6, my father took me to the greatest basketball game ever played: Game 5 of the 1976 Finals. I slept through the second half, the first overtime and most of the second overtime before waking up for Havlicek’s running banker. I can still see it. Happened right in front of us. The Celtics won that one in three overtimes. Thirty-three years later (ironic number), they played another three-OT classic and lost. I was a little boy for the first one; for the second one, I watched most of it with my little boy. He had no idea what was going on. When he’s older, I’m going to tell him that he did.

Sports keeps moving. You get older. You pass the love down to your kids. You think you will care less … and you don’t. The Tony Allen sub killed me. The Pierce foul killed me. The Rose block killed me. Two toe-on-the-line 3-pointers … I can’t stop thinking about them. Add everything up and that’s how I ended up 500 blocks from my house fretting about Game 7 and rehashing everything that happened in the other six.

By the time we returned home, Rufus was dragging like Ray Allen at the end of that third overtime. I felt bad for him. He looked at me like he was thinking, “Please Lord, never again.” He demolished his first bowl of water in 2.34 seconds. He demolished the second one in 5.67 seconds. Then he passed out. He might not wake up until tomorrow.

I don’t have the heart to tell him that another marathon walk might be looming on Saturday night. My best-case scenario would be the Celtics winning in quintuple-OT, followed by Ray Allen and Ben Gordon collapsing into each other’s arms like Apollo and Rocky as Allen says, “Ain’t gonna be no rematch.” My worst-case scenario would be grabbing Rufus’ leash with a frown and rubbery legs. Either way, I am prepared for anything: KG pulling a Willis Reed, Jordan and Bird showing up, Rondo hitting John Salmons with a chair, Doc running the series-deciding play for Tony Allen, Kevin Harlan’s head flying off his body, Tim Thomas experiencing a human emotion, you name it. That’s the best thing about this series: Anything is possible. The ceiling hasn’t just been removed, it’s been obliterated.

Call it Game 7, call it Round 15, call it whatever you want. Just remember to call it the greatest first-round series ever played. I hope and pray it doesn’t end with me taking a walk.