When it’s time to walk away

This column appears in the July 13 issue of ESPN The Magazine.

I started my Sports Guy site during the summer of 1997. You could read the column only if you had AOL. You know, back in the days when people had AOL. For my third piece, I wrote a diary of watching the NBA draft at my dad’s house. It posted one hour after the first round ended. I had no idea if anyone would read it. 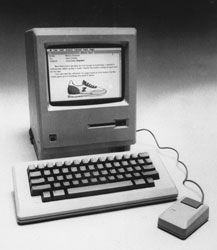 Much to my surprise, a steady trickle of e-mails started arriving around midnight, mostly from readers telling me that: a) I made them laugh; or b) I should perform a sexual act on myself. I read those e-mails in my dad’s office on one of those old Apples that made you cross-eyed if you stared at the screen too long. Two things stood out: the immediacy of the reactions and the fact that readers were reacting at all. I specifically remember thinking, This wacky Internet thing might work.

Twelve years later, I still have a Sports Guy column. My writing process hasn’t changed, even if everything else has. You don’t need AOL to read me. You can read me on cell phones, PDAs, Kindles, desktops and wireless laptops. You can read me on a plane, in class, at the gym or on the toilet. You don’t even need to visit ESPN.com; you can just grab the latest link off my Twitter feed.

When change happens gradually over time and you’re buried in the ebbs and flows of it, you’ll miss the big picture without a goofy catalyst to wake you up. For me it happened during last February’s NBA All-Star Weekend in Phoenix. I was standing outside a hotel waiting for a cab and crossed paths with a returning jogger. He pulled off his headphones, still sweating, and acted like he was about to tell me something amazing.

Turned out he had been listening to my podcast on his iPod. Bizarre. If you had presented me with this scenario in 1997, I would have been convinced you were high: Some day, I can host a homemade radio show and anyone can hear it? I can write columns that people can read on a cell phone? I know it’s been only 12 years, but really, it feels like 50.

That got me thinking: What other sports-related changes am I taking for granted? I don’t mean typical candidates like blogs, eBay, StubHub, fantasy sites, streaming video or the never-ending “Is that HR hitter juicing, or is he just having a hot streak?” game. We’re aware of these things. They’re discussed. These next things? Not as much.

Twitter. “Wait!” you’re saying. “Everyone’s talking about Twitter!” Just hear me out. I resisted Twitter for months before caving and making it the deleted scenes to my DVD (in this case, columns and podcasts). I had always wanted a place to throw up quick one-liners and to pass along links I liked, even if I didn’t fully realize it.

Now? I can’t imagine doing my job without it. In my most recent draft diary, I predicted that Ricky Rubio would haunt everyone who passed on him the same way Stevie Nicks haunts Lindsey Buckingham every time she sings “Silver Springs.” A Twitter follower sent me a link of Stevie doing just that in a 1997 concert clip. I retweeted the clip on my feed. A throwaway joke suddenly came to life. I thought this was incredibly cool. Again, like a deleted scene.

So yeah, Twitter started out as a place for Shaq to report that he had just eaten pancakes. But hasn’t it evolved in a much more fascinating direction? In sports, athletes finally have a way to bypass the media completely. Sometimes their tweets are interesting, sometimes they’re stupid. Kevin Love broke news that his coach wasn’t coming back on Twitter. That was interesting. Chad Ochocinco wrote, “Okay, first Mrs. Fawcett, now Mr. Jackson, please tell me that this is a mistaken rumor, if not this is just as sad as 9/11.” That was stupid.

But think about how fast this moved. How many stories will break on Twitter each week? How many athletes will get into trouble by writing something dumb? How many Twitter-related apologies will be issued per week? How will franchises use Twitter to sell tickets, merchandise and everything else? Which mainstream website will strike a deal with Twitter first? Will I be tweeting my annual draft diary next year? Where is this going?

Using PDAs at sporting events. Pitching changes, halftime acts and TV timeouts were always boring in person. Not anymore. Now we can check e-mail, look up stats, settle arguments and even text friends watching at home to ask, “Was that sixth foul legit?” or “Should I charge on the field and kill Dice-K before he blows this game?” There’s no dead time. It’s perfect for the short-attention-span era. It is.

I never realized the hit-or-miss potential of a live sporting event until the advent of PDAs. I went to 20 Clippers games last year, many of them 30-point blowouts, and would have passed out from boredom if not for my BlackBerry. Is it harder to keep me interested these days, or were live games always this erratically entertaining and we just never admitted it? An NBA exec confessed to me recently that he loved a certain prospect because every time the kid was on the floor, the exec was afraid to glance down at his BlackBerry. Why? He didn’t want to miss an exciting moment. He said the kid passed his BlackBerry test. 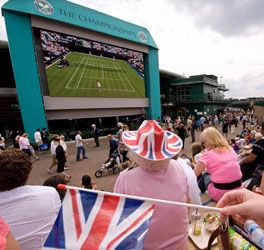 Now, that’s funny. Then again, what’s happening to us? I mean, two of my friends hooked up BlackBerrys to their Sidekicks and can watch any game they want, anywhere, anytime. I’m afraid to cross that line. I don’t know what would happen to me. Are we headed for a world where people attend sporting events while watching other events on their BlackBerrys? I’m frightened. On the other hand …

Sports in HD. I loved attending baseball games once upon a time. Now? I’m just as happy watching them on my 52-inch LCD. With the green grass, bright picture and clear faces in the stands, it’s almost like being there. That goes for every sport. I watched way more of the NHL playoffs than I ever imagined I would this spring. I watch every USA soccer game. I love watching Wimbledon and the French Open again. Hell, I even watched cricket last week.

With HD, you see the spin on curveballs and sliders. You see slap shots and serves. You see chalk rising from cleats and crosscourt forehands. You see fast breaks developing before they happen. You see shattered bats splintering and blood trickling over a fighter’s eyebrow. It’s a new world for sports fans: an intimacy that can’t be found otherwise, unless you’re paying through the nose for great seats. I thought I’d like sports less when I got older. Actually, I like them more. And it’s partly because of HD. I’m constantly saying to myself, I can’t get over how great that looks!

See, that’s the thing about life. It never stops changing. Twelve years from now, I might be reading you my annual NBA draft diary in the form of a human hologram. You never know. After the past 12 years, I’m prepared for anything.