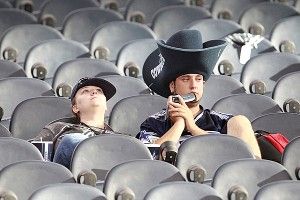 Here’s what you do: Find nine friends, agree on an entry fee and prize money, then come up with a draft order from 1-10.

From there, you use the following “drafting system” to pick teams. I have no idea how the creator came up with these numbers, just that there’s a 20 percent chance he was one of those MIT brainiacs or something. Anyway …

Everyone picks three teams. The highest total number of victories for those three teams wins the pool.

Easy, right? Last season’s winner (my buddy House) picked third, 13th and 30th and ended up with the 15-win Packers, nine-win Giants and nine-win Bengals for a total of 33 wins, stumbling into such a three-headed juggernaut with which he clinched the pool with a week to go. (I finished six wins behind him with the 13-win Patriots, nine-win Titans and five-win Redskins, who were the 1-20-26 picks.) For this year’s pool, I drew the fifth slot and agonized over the Ravens and Niners (ultimately taking the Ravens). Here’s how that 2012 pool panned out.

Which two teams weren’t selected and shared the Turd in the Punchbowl booby prize? The Browns and Dolphins.

P.S. If you love this pool, you can always run it back by reversing it and doing a Losers Pool. Same idea except you count losses, not wins.