For the second time in five games, Jon Lester annihilated the Cardinals lineup and now has the Red Sox on the brink of winning their third World Series in the past decade. As crazy as it is to say this about any Red Sox–related story, it feels like not enough is being made of this.

As a 22-year-old rookie back in 2006, Lester was diagnosed with cancer, specifically anaplastic large cell lymphoma. After the season, he went in for chemotherapy treatments. He started the next season at Single-A ball. By July 23, he was back in the big leagues. In October of that year, he won the World Series–clinching Game 4 in Colorado. A year after that, he was one of the 10 best pitchers in the game, posting a strong 3.21 ERA and getting hitters out by mixing well-placed fastballs, cutters, and curves, without throwing overwhelmingly hard. In less than two years, he went from pondering his mortality at a ludicrously young age to becoming a 210-inning workhorse pitching in a brutally tough environment in the toughest division in baseball.

In pacing Boston’s 3-1 win in Game 5 and giving the Sox a 3-2 lead, Lester was both dominant and efficient. In 7⅔ innings, he allowed just a single run on four hits (one of them a Matt Holliday solo homer), striking out seven batters and walking none. He did so while throwing just 91 pitches and was still going strong when John Farrell pulled him from the game. That Game 5 gem followed a Game 1 whitewash in which Lester also tossed 7⅔ innings, ceding five hits, no runs, and one walk while striking out eight. Acknowledging the slightly arbitrary parameters involved, ESPN Stats & Info’s Lester nugget was a jaw dropper: The last pitcher to start two games in the same World Series in which he pitched at least 7⅔ innings and allowed one run or fewer was Bret Saberhagen, way back in 1985. No one else, not Greg Maddux in his prime, Randy Johnson and Curt Schilling the year they destroyed the league for the Diamondbacks, or anyone else had done it since. Meanwhile, Lester lowered his career playoff ERA to 2.11, fifth-lowest all time with a minimum of 75 innings pitched (hat tip @MosesMassena16).

Once again, Lester’s most effective pitch was his cutter. He threw 19 of his 28 cutters for strikes on the night, generating swings-and-misses on four of them. It was also his go-to strikeout pitch, starting off the plate against right-handed hitters then finishing at the very edge of the outside corner. Yadier Molina in the second and Shane Robinson in the fourth were the two most shell-shocked victims of that pitch, at least if we’re counting by some Venn diagram of huge pitch movement and exasperated hitter facial expressions. Since we’re always looking ahead round these parts, here are two things to consider about Lester, even after he’s made his final start of the 2013 season:

1. As unhittable as Lester looked for most of his two starts in this series, he did victimize the team that ranked just 26th in the majors in OPS against left-handed pitchers (21st in wRC+, if we want to use park- and league-adjusted stats). Considering those numbers, it’s hard to imagine Farrell not at least considering going with streaking lefty Felix Doubront over recently struggling righty Jake Peavy if there’s a Game 7.

2. Don’t be surprised if we see Lester pitch in relief if there’s a Game 7, especially with Craig Breslow struggling in his past three appearances. In fact, Lester’s availability in relief in lieu of what would be his between-starts throwing day if he were starting again this year (John Lackey filled that same relief role in Game 4) could help push Farrell toward Doubront, too, given Lester’s availability would give Boston a strong lefty option out of the pen in Doubront’s absence.

A few more takeaways from the most cleanly played game of this series:

He went 3-for-4 in Game 5, tallying a run-scoring double in the first, a clean single to right in the fourth, and an infield(ish) hit in the eighth that a shifted Matt Carpenter fielded but was unable to convert into an out. Ortiz is now batting .733/.750/1.267 for the series, threatening Billy Hatcher’s record .750 batting average in the 1990 World Series (minimum 15 plate appearances).

With Ortiz feasting on pitches and celestial bodies alike, there have been suggestions that the Cardinals should walk him every time up, or at the very least give him nothing to hit. To some extent, this goes to the idea that a hitter might be dialed in and thus seeing the ball so well that he’s either crushing pitches or taking the free pass if he doesn’t get something he likes. Though I’ll wear the stathead beanie propeller cap with the best of them and usually attribute aberrant performances largely to small sample size, I do think it’s possible for a hitter to have a heightened period of mastery over the strike zone over a short stretch. But even if you want to argue that Ortiz has been hot lately and that makes him scary, the bigger and better reason to pitch him carefully is because the Sox keeping putting a lousy hitter behind him.

That lousy hitter is Jonny Gomes. Though Gomes might have the biggest hit of the World Series, that doesn’t change the larger data set, one that shows Gomes hitting just .071/.188/.286 in the World Series, .154/.233/.282 in the playoffs, and, far more tellingly, .225/.310/.423 for his career against right-handed pitchers. Farrell, like most other managers in his position, has shown that he wants to ride the hot hand during these playoffs, which explains Gomes batting behind Ortiz for the second straight game, this time in the cleanup spot. But Gomes isn’t actually hot. He pulled the equivalent of an inside straight draw on the river, with the dealer showing him the whole deck until the perfect card magically floated into Gomes’s hand. If belting a middle-middle cripple pitch of a fastball against Seth Maness is going to be the next iteration of “the Red Sox are undefeated in the playoffs when Jonny Gomes is in the lineup and I’m holding a rock that keeps away tigers,” the Cardinals should count their blessings. Mike Napoli should be back in the lineup at Fenway, hitting behind Ortiz. And if Shane Victorino is healthy, Gomes, by merit, should find himself on the bench.

Whichever way the Sox go, the Cardinals will still have to contend with this this: 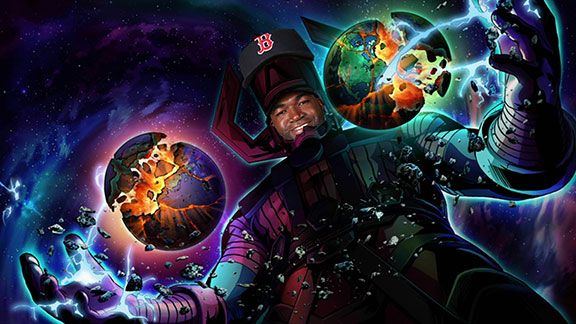 Mike Matheny has shown an impressive combination of not recognizing his own mistakes and riding the hot hand when he shouldn’t.

In both column and podcast form, we discussed Matheny’s counterproductive insistence that Seth Maness be both his ground ball guy and his sixth-inning guy and the resulting damage that logic caused in Games 3 and 4. The Cardinals manager did show a willingness to change things up a bit in Game 5, though. Unfortunately he did so by making Shane Robinson his no. 2 hitter.

You could intuit two reasons that Matheny would’ve made this move. One, he might’ve liked Robinson’s skill set as a good fit for the no. 2 spot, given Robinson doesn’t strike out much and has decent speed. Two, there’s a good chance he was seduced by Robinson’s success this postseason, which amounted to a grand total of five hits in 13 at-bats. Never mind that Matheny had several hitters who should’ve been batting higher than Robinson in the order; that having a small-ball guy with no other discernible skills batting second was a groovy idea in 1965 but completely pointless in 2013; and that 13 at-bats aside, Robinson can’t hit, with a brutal .233/.320/.302 career line against left-handed pitchers. Robinson and pinch hitter Jon Jay combining to go 0-for-4 was bad. The Cardinals’ usual no. 2 hitter, Carlos Beltran, getting left in the on-deck circle when the game ended, and thus getting one fewer at-bat than Robinson and Jay, was borderline scandalous.

The Red Sox will start right-hander John Lackey in Game 6, so presumably the lineup will be back to normal at Fenway. Let’s just hope for the Cardinals’ sake that Matheny doesn’t get any more silly hunches.

David Ross and Stephen Drew look like locks to start the rest of this series.

Neither Ross nor Drew had hit a lick in the playoffs heading into Monday night, with Ross going 4-for-17 and Drew a miserable 4-for-47. But both players looked good on defense at two of the most important spots on the diamond, while their alternatives — Jarrod Saltalamacchia at catcher and Will Middlebrooks at third (Xander Bogaerts would’ve moved over to short if Drew were benched) — had made spectacularly awful plays in the field. The hope was that Ortiz, Dustin Pedroia, and the rest of the top half of the order could generate enough offense to justify playing Ross and Drew for their defense.

Now, after strong offensive showings in Game 5, it’s hard to imagine Ross and Drew not starting Game 6, plus Game 7 if necessary. Ross was an all-around star on Monday, going 2-for-4, knocking in the winning run with a ringing ground-rule double, and for the second time this series catching a great Lester start. Drew went 0-for-3 with two strikeouts, so at first glance it’s hard to imagine a world where that would be considered a good day at the plate. But Boston’s shortstop drew his team’s only walk off a strong Adam Wainwright (10 strikeouts in seven innings), coming back from a 1-2 hole to get on base. Moreover, Drew blasted a Wainwright pitch to the wall in right-center that just missed leaving the park; it would’ve been gone on a hot July day, and was a great sign that one of Boston’s best hitters against right-handed pitchers this year might be about to bang out some big hits.

Unless the Cardinals pick up Jose Lobaton overnight, the Red Sox are almost certainly clinching the World Series if they get a late lead …

… thanks to the amazing Koji Uehara. His latest performance was a gem, started by a slightly controversial at-bat against Matt Adams in the bottom of the eighth. Lester had thrown just 91 pitches to that point, the Cards had a runner on base, and Adams had shown throughout his minor league career and fairly brief major league career that he crushed right-handers but was merely decent against lefties. There was certainly an argument to be made for keeping Lester in the game and keeping Uehara at least temporarily on ice.

Farrell laughed off that argument, brought in Uehara, and watched him handle Adams with ease, firing three straight splitters, the last two dive-bombers that disappeared out of the strike zone, a foot below Adams’s swings. The Cards did a big, fat nothing against Uehara in the ninth, too. After working the count to 2-2 to start the ninth, Matt Carpenter geared up for the inevitable splitter, the never-fails put-away pitch for Boston’s closer. Instead, Uehara surprised him with a perfectly placed, 89-mph fastball, one that clipped the outside corner and left Carpenter shaking his head as he walked back to the dugout. From there, Uehara cruised, retiring Jay on an easy groundout to first and Holliday on a flyout to right. Four batters, 15 pitches, no baserunners, more surgical excellence from a pitcher who now owns a 0.71 ERA this postseason, with 12⅔ innings pitched, seven hits allowed, 15 strikeouts, and no walks.

Of all the accolades you can hang on Uehara’s season for the ages, we can probably add one more: No player in baseball history had ever waited until the advanced age of 38 and only then become the best in the game at his position. No player, that is, until Koji.