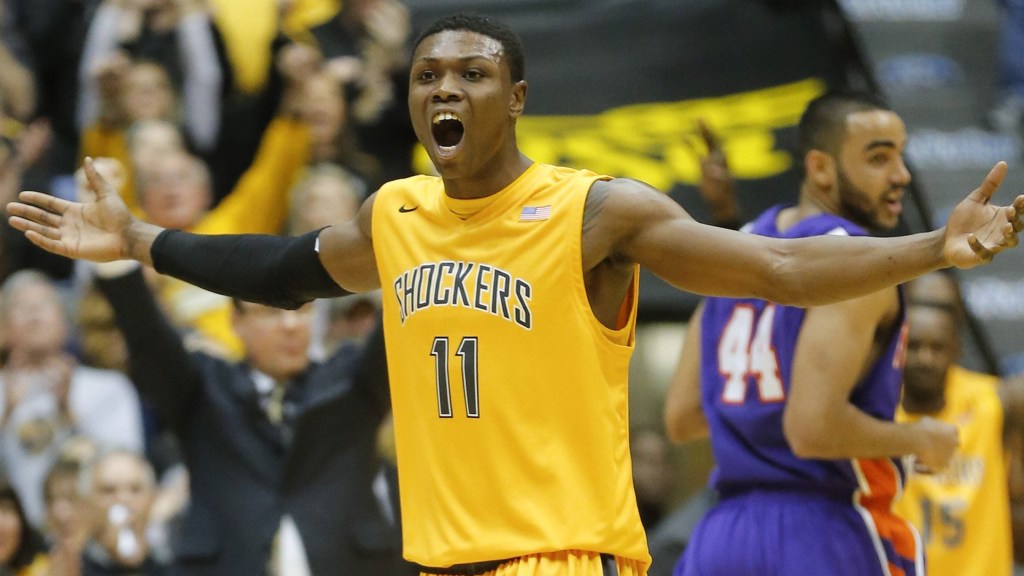 Here’s a riddle: Which college basketball team has beaten everybody and nobody?

If you guessed Wichita State, then you clearly read the headline of this post and saw through my opening rhetorical gambit. In which case I apologize that I couldn’t challenge your intellect at the level it deserves. Here’s a link to a difficult Sudoku.

But also, congratulations, because you’re right! The Wichita State Shockers have beaten every team on their schedule and, at 24-0, stand as one of two undefeated teams in Division I hoops. They have also beaten nobody, in the most colloquial sense of the phrase. Gregg Marshall’s team plays in the Missouri Valley Conference, a mid-major setting with teams of decent pedigree like Indiana State and Northern Iowa and Southern Illinois. But this is not an “up” year for the MVC (a fact compounded by the loss of Creighton and the Mighty McDermotts to the Big East), and the Shockers can’t look at any of their 11 conference wins and say “Yes! That was the signature victory.” Unfortunately, there’s not much to brag about in the nonconference schedule either. Yeah, they beat Tennessee, and Tennessee isn’t horrible, and they took down a competent BYU club on a neutral floor, and they even beat Saint Louis — that really good Saint Louis club that hasn’t yet lost in the A-10 — on the road. But where’s the really colorful feather for that drab cap? Where’s the sexy icing for that vanilla cake?

“NOWHERE!” you might exclaim, leaping about, and then you might dismiss them like you’ve dismissed so many other underachieving mid-majors throughout history. The Creightons, and the Gonzagas, and the every-team-ever-in-the-Mountain-Wests. History would be on your side, too, except for one problem: March 30, 2013.

It didn’t hurt, a week later, when eventual champion Louisville needed a favorable call from the world’s least popular referee to secure a win over its resilient opponents. And while Wichita State didn’t have the romance we afforded to Butler and VCU, that only serves now to make the Shockers that much more terrifying. The age of being amused and delighted and a little bit condescending when small schools make the Final Four are over; Gordon Hayward saw to that, when his half-court heave nearly sent the anti-Duke universe into spasms of joy. We know these teams can win. We know they can make Final Fours. And we haven’t seen it yet in the modern era (if you think I’m counting anything Jerry Tarkanian was ever involved with, you’re crazy), but we know they can win a national title.

Which brings us to 2014, and to last night. Wichita State was on the road facing the Indiana State Sycamores — the only other MVC team to crack Ken Pomeroy’s top 100. As in life, there are no guarantees in college basketball, but by the numbers, this looked like the last regular-season game the Shockers could potentially lose. The consistency has been remarkable, especially when you consider that Marshall’s team saw three seniors depart last season, and those seniors accounted for more than 30 points, 13 rebounds, and seven assists per game. But he retained a solid core that includes Cleanthony Early, last year’s MVC Newcomer of the Year and a member of the All–Final Four team. He’s even better this season, averaging 16.3 points and 6.5 boards per game, and without Doug McDermott standing in his way, he’s a shoo-in for conference player of the year.

But the real reason the departing seniors didn’t precipitate a drop-off is sophomore star Fred VanVleet. Despite his name, VanVleet is not an eccentric Dutch shipping magnate, but a 5-foot-11 point guard from Rockford, Illinois, with a competitive fire that dates back to childhood. He was a surprise star off the bench last year in the NCAA tournament, unleashing double-digit scoring performances against Gonzaga and Ohio State after having just one all season. And he’s capitalized on that momentum this year, putting together a stat line that’s incredible for its efficiency. He’s averaging 11.9 points per game, but that’s on 46.2 percent shooting. He’s grabbing four boards per game, excellent for a point guard, and his trump card is his assist-to-turnover ratio, which is just below a staggering 4.0 (he has 126 assists to 33 turnovers). Early is the star, and Ron Baker is the glue, but VanVleet is the engine. He’s the one who scored 12 of Wichita State’s final 13 points to help the team overcome an 18-point halftime deficit on the road against Missouri State in the only conference game that was ever in doubt. And if Wichita State is going to make the Final Four, it’s going to be on his shoulders.

The team defense doesn’t hurt, either. With 91.8 points allowed for every 100 possessions, the Shockers are 12th in the country in defensive efficiency, which tops even last year’s squad and represents the best mark in Marshall’s seven-year tenure. The offense is better than the 2013 version, too, and all that remains to be seen is how the Shockers will respond to real competition — the only real loss for this year’s team is, strangely, the loss of Creighton to the Big East. It deprived us of college basketball’s best mid-major rivalry, and it deprived Wichita State of an opponent that could serve as a real testing ground (in last year’s Final Four season, the teams split the regular-season matchups, and Creighton won the rubber match in the conference tournament final).

The team’s three stars all have Final Four experience, and it’s hard to imagine them shrinking just because the opponent happens to play in a BCS conference. That’s why an 18-point halftime road deficit didn’t faze them, and it’s why last night, facing Indiana State in what might be the final challenge of the regular season, the Shockers came out on the road, controlled the second half, and finished the game on a 7-2 run to secure a 65-58 win.

The 1976 Indiana Hoosiers finished 32-0 and won the national title, and in almost 40 years, nobody has matched them. A handful — St. Joseph’s (2004), UNLV (1991), Alcorn State (1979), and Larry Bird’s Indiana State Sycamores (1979) — have managed to finish the regular season undefeated before losing in the tournament. This year, only Syracuse and Wichita State remain unbeaten, and the Shockers have the distinct advantage of not having to visit Cameron Indoor Stadium in two weeks. If they finish off the regular season without a loss, they’ll secure a no. 1 seed in the tournament, and may even go into March Madness as the top-ranked team in the country.

Skepticism will abound. As of now, there aren’t many who believe this team has a legitimate shot to make history and win a national title with a perfect record. But this is no Cinderella story; if a miracle is in the cards, the miracle has precedent. So, let’s change that opening riddle to something more appropriate, and your big hint is that the answer remains the same: Which college basketball team has beaten nobody, and could stun everybody?