Who’s That Guy is an ongoing Grantland series and an orientation tool to use in the vast sports landscape. Local and national reports have confirmed that the Cleveland Cavaliers have reached a deal with longtime international coach David Blatt. He will be the Cavs’ new head coach. Here’s a primer.

Who Is He? David Blatt!

Can You Give Us His Origin? Framingham, Massachusetts, some 20 miles from Boston.

Could You Use Him in a Sentence (of 50 Words or Fewer)? In his 21 years of coaching professionally, David Blatt has won 17 championships in various leagues and tournaments, most recently leading Maccabi Tel Aviv to a Euroleague championship in May; he is simply one of the great winners in basketball today.

Are There Any Alternate Pronunciations? Just the one. Wait — actually, story time: In 2012, I somehow managed to watch the Olympic men’s basketball quarterfinal matchup between Russia and Lithuania on a Lithuanian feed. The announcers, as proud Lithuanians reflexively tend to do, added an “-as” suffix to his name. David Blattas. It sounded like “DAH-vid BLAH-tuss.” It’s how I’ve said Blatt’s name in my head for the past two years.

Can You Put Those Accomplishments in Perspective? Sure. How’s this: Blatt has won a EuroBasket title (2007), a Euroleague title (2014), and an Olympic medal (bronze, 2012). There are only five other head coaches in basketball history who have hit that trifecta.

Wow, OK. Is That the Craziest Thing About Him? No, like most basketball lifers, he’s plenty crazy. Here’s something pretty amazing, though: He’s a Jewish Israeli American who led the Russian men’s national basketball team for six years. Think of how much history had to be compressed into a pill and swallowed by those who lived in and through the former Soviet Union. He’s not bashful about his standing in modern Russian sports culture, either. “Now I’m part of the fabric of the basketball society,” Blatt told Sports Illustrated in 2012. “Those good people gave me the highest order for coaching in Russia, and no foreigner has ever received that. That says it all right there.”

What Do Players Think of Him? Let’s take the word of Andrei Kirilenko, one of the best Russian basketball players ever, if not the best. Kirilenko has said in the past that he thinks Blatt is a better coach than Phil Jackson.

OK, I Think We’re Done Here. No, we most certainly aren’t.

Fine. What’s His Pedigree? He’s a Princeton grad who played point guard for the team from 1977 to 1981, thus making him a Pete Carril disciple. Carril’s lauded Princeton offense runs through his veins and informs much of his on-court philosophies.

On the Kurt Rambis Scale of Strict Systemic Interpretation, Where Does Blatt Fit? If the range is 1 to 5, with 5 being Kurt Rambis, I’d say a 2. I’ve watched the Russian national team play over the years, and there is a strong emphasis on making smart, decisive cuts based on reading the players around you. As such, backdoor cuts were abundant. You know, the same backdoor plays that made the Princeton offense famous.

But Blatt himself says he doesn’t actually run the Princeton specifically. In an article from his alma mater’s school paper, he paid homage to the foundations of his basketball wisdom. “I learned a great deal from my college career at Princeton,” Blatt said. “[Carril] is one of the greatest basketball minds in history. I learned from him many good lessons, and I learned a few bad ones, too. I think he’d appreciate me saying that, actually.”

When You Say Princeton “Runs Through His Veins,” How Do You Mean? In 2011, heinnews had an excellent Q&A with Blatt about European basketball, but the most impressive part of the interview was when Blatt was put on the spot with a little game of word association. He was asked the first thing to come to mind when he heard “Georgetown, 1989, NCAA first round.”

Off the dome, without any video assistance, Blatt broke down the second field goal of the Princeton-Georgetown first-round game that, as Sports Illustrated would tell you, “Saved March Madness.” Again: This guy broke down one of the very first possessions of a game that happened 25 years ago extemporaneously just by replaying it in his mind. And he was in no way, shape, or form involved in the game.

Here’s what Blatt said in the interview:

I still see the play they ran. It was the backdoor layup. I know the Princeton offense well. I lecture on it. It’s something we used to call weak side-spin where we look to play the weak side but spin dribble and draw the strong side center up and suck the defender up on the weak side wing and then back-cut ’em and throw a bounce pass for a layup. I remember seeing the play and getting really excited about seeing it work, which I know it can.

He Sounds Like a “Process Over Results” Kind of Coach. He is, and it’s one of the reasons why so many teams this offseason have decided that now, of all the times he’s been rumored to make the NBA leap, is his moment. Blatt is a guy who demands everything from his players, much in the vein of a Gregg Popovich or a Tom Thibodeau.

Every single play matters to him. There is no forest. There is only the tree directly in front of you. Pop and Thibs are the good precedents set, but you don’t have to look far to see where it could go wrong. Mike Dunlap, who coached the Bobcats during the 2012-13 season, had a similar obsession to detail. He overloaded on the practices early and burned out players way sooner than necessary. The NBA has a much more rigorous schedule than European leagues, and Blatt will need a strong assistant or associate head coach to help him reconcile his impulses as a coach and the realities of the league.

He Doesn’t Seem Like He Has a Lot of Fun. Don’t be so quick to judge. 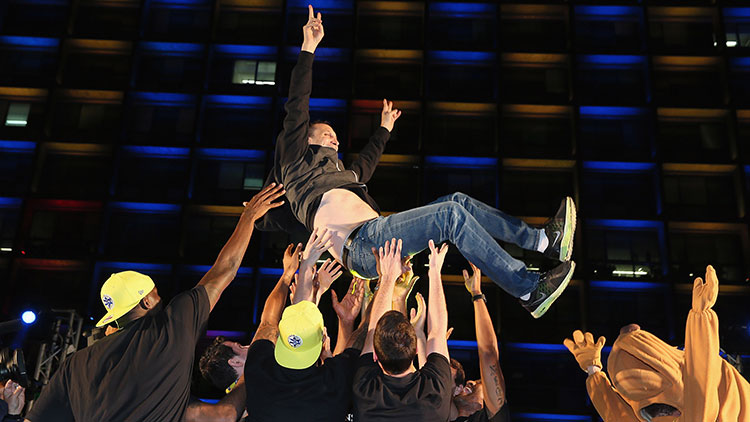 Is He Media Friendly? I mean, the quotes I’ve shared are pretty good, no? Here’s what he’s like during a presser:

Lastly, Are There Any Other Videos of Him We Should Know About? Here’s a brilliantly misleading video titled, “David Blatt kicks Shved and Monya on live broadcast”:

Spoiler alert: He doesn’t kick either of them. We wouldn’t be having this discussion if he did.