Who Is He? Cincinnati coach Mick Cronin

Where Is He From? Cincinnati

Years in Charge of the Bearcats: Eight

Coaching Persona in 30 Words or Fewer: Cronin paces the sideline like an overzealous movie usher hellbent on checking everyone’s ticket, until a bad call or poor decision transforms him into an intense, flailing Lilliputian.

You Might Know Him From: That time an official stepped to him and he lost his mind. Or when his team was involved in this ugly brawl two years ago. Also because he’s really short in a sport full of abnormally tall people. 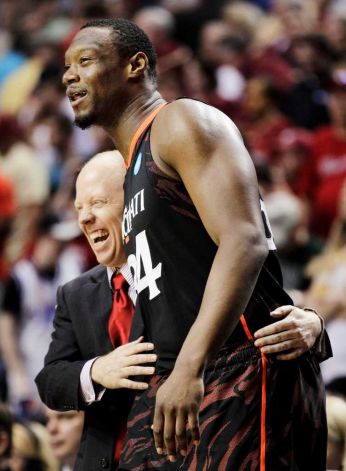 His Team’s Style: The Bearcats play incredibly slow — they’re ranked 310th in adjusted tempo, according to Kenpom.com — on offense, and defend like crazy. Cronin’s Cincinnati teams aren’t like the über-physical Bob Huggins Bearcats of the early ’00s that would pressure and pummel opponents into submission. The current group instead relies on a disciplined man-to-man scheme in which players rotate and help quickly and effectively. Cronin also isn’t afraid to mix in some zone and occasional pressing with excellent results.

Social Media Presence: He’s actually on Twitter! But unless you like bland positivity and an excessive use of exclamation points, it’s probably not going to end up being one of your top 10 follows.

As I have said all season….so proud to coach these guys!! Great win today. Fans, you were awesome!!! See you all again next Saturday!!

Coaching Path: His first influence was his own father, Hep, a successful high school coach whom Mick played under at LaSalle High School in Cincinnati. After spending his undergrad years coaching at a local high school — where he went 57-3 as a JV coach — he got his first job as a lowly video intern for his hometown Bearcats, eventually working his way up to an assistant under Huggins. He then left his alma mater (and was branded a traitor for it) in order to take a job as Rick Pitino’s associate head coach and recruiting coordinator at Louisville. Those two experiences likely were the primary reason for Cronin’s defense-first approach and his use of zone defense and pressing — a Pitino staple.

After his time at Louisville, Cronin landed a job at Murray State. Two NCAA appearances in three years made him an easy choice to take over a Cincinnati program in total disarray after Huggins failed to graduate players or recruit ones capable of staying out of trouble. After some initial struggles, Cronin now has the Bearcats back among college basketball’s elite.

So Why Should You Know Him? Because he’s the everyman’s coach! I mean, the dude is 5-foot-7 and didn’t even finish his high school basketball career! With so many larger-than-life legends and ex-players patrolling the sideline in Division I basketball, it’s definitely uncommon for someone who looks like he could be knocked over by an errant pass experience so much success.

Cronin also does things the “right way.” In 2011, he benched the talented but temperamental Yancy Gates, even though Cronin’s job was on the line at the time. Cincinnati players now actually graduate. And of course, Cronin is the type of coach who only plays you if you play hard and play defense. He might as well change his name to Norman Dale.

The Final Reason You Should Know Him? Because his Bearcats are the type of defensive stalwart that can grind their way to a deep NCAA tournament run. If they do, you’ll be hearing a lot more of Cronin’s name, because it will be linked to any of the big jobs that come open after the season.