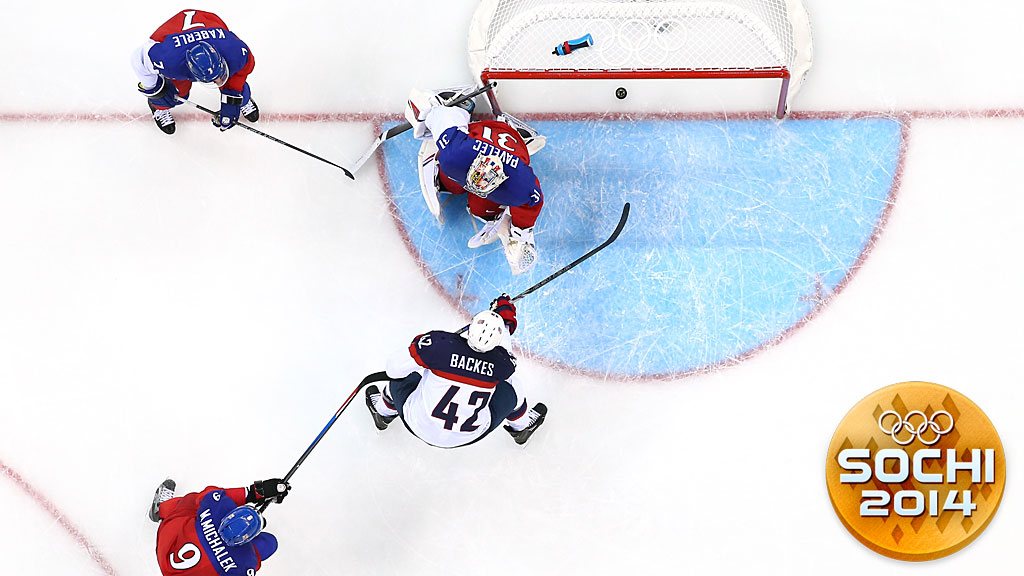 It was highly annoying that both the U.S. and Canadian men’s hockey teams played in Sochi at the same time Wednesday, particularly because I picked the wrong game to attend.

Team USA’s quarterfinal matchup against Czech Republic at Sochi’s Shayba Arena looked at first as if it could be a back-and-forth volley — James van Riemsdyk scored while fans were still getting settled into their seats, and a puck that caromed off Ryan McDonagh’s skate three minutes later evened the score. The Czech team, which early in the tournament had been plagued by coaching mistakes and odd roster decisions, looked as if it had gained steam and become more cohesive following a 5-3 win over Slovakia the night before.

Next door, at the bigger and bolder Bolshoy Ice Dome, Canada was taking on Latvia, a team whose captain, 41-year-old Sandis Ozolinsh, was an NHL name from the ’90s. It seemed like the kind of mismatch the star-heavy Canadian team could easily exploit, one of those games that might help get rid of a few scoring droughts and could maybe result in a solution to the odd problem of who should play alongside Sidney Crosby.

Instead, Latvia’s 21-year-old goaltender, Kristers Gudlevskis (a Lightning prospect), put up the job audition of his life as Tampa Bay GM Steve Yzerman, who also runs Team Canada, looked on. The Canadian team outshot the Latvians 57-16, but with just less than seven minutes remaining it was still mired in a 1-1 tie. 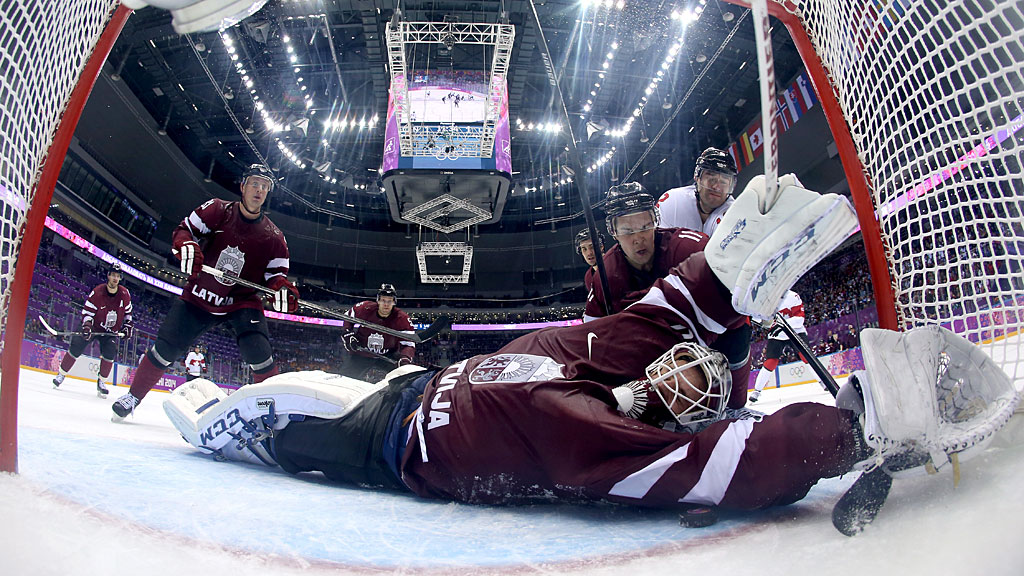 Meanwhile, the U.S. had eliminated most of the tension surrounding its game: It was up 3-1 by the end of the first period, and early in the third, Phil Kessel became the fifth U.S. goal scorer of the night. In the press box, much of the talk turned to what we were all missing over at Bolshoy. Ultimately, Shea Weber gave his team a 2-1 lead late in the third period, and a potential national nightmare for Team Canada was averted. (“Canada, birthplace of hockey, breaks hearts of mighty Latvians,” said the latter country’s newspapers today, according to CBC.) The Russians, playing earlier, hadn’t been quite so lucky.

As Teemu Selanne got ready for bed Tuesday night, he was plagued by “kind of a weird feeling,” as he would later put it. Selanne, Finland’s 43-year-old captain, is here in Sochi to play in his sixth — sixth!! — Olympics. (His talented young teammate Mikael Granlund, among others, wasn’t even alive when Selanne made his 1992 Albertville debut.) He’s been savoring the experience, riding his bike around Olympic Park, “a smile on my face the whole tournament,” he said. But now he knew that his long and storied career with the Finnish national team might be about to come to an end.

Not so fast. The next day, Selanne scored what turned out to be a game winner and added an assist as Finland defeated Russia, 3-1, in the quarterfinals, stunning a hopeful host nation for whom gold had pridefully, politically, and very publicly been the goal.

And with that, the Finnish team, missing two key players in Mikko Koivu and Valtteri Filppula but benefiting from Bruins goalie Tuukka Rask’s near-perfection, advanced to the semifinals, where they will face their bordering neighbor nation of Sweden. Selanne extended his national career by two more games. The only question is whether that second one will be for bronze or for gold.

It was a huge win for one of this tournament’s most pleasant and hard-to-root-against teams. But we’re in Sochi, and so the biggest story following the game wasn’t Finland’s victory but rather Russia’s loss. People said the game might as well have been the official closing ceremony, and they weren’t really joking. Even Selanne was affected by the devastation around him, saying he was “a little bit sad” for his opponents. “Obviously they had a big dream to win the gold medal here,” he said, “and then it doesn’t work, so it’s kind of disappointing in many ways.” 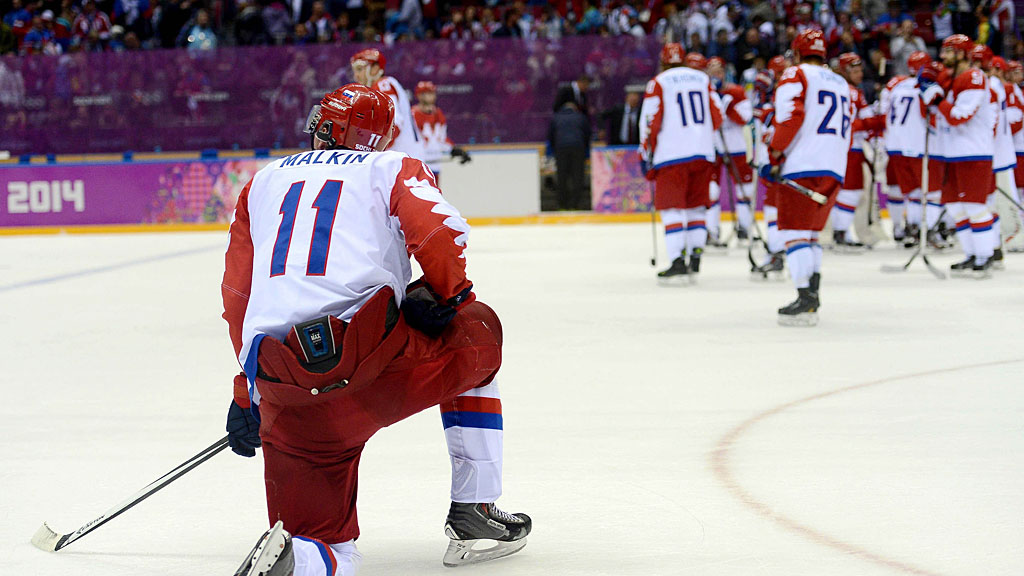 The Russian media was far more blunt in its analysis. As Yahoo’s Dmitry Chesnokov explained, one major headline “proclaim[ed] that the loss and their effort was embarrassing to everyone involved … a reference to a classic Russian film in which a righteous man said that the actions of his antagonists were offensive to his country.” The coach’s press conference following the loss — always testy and badgering, even after wins — devolved into something out of a nightmarish novel. The Wall Street Journal ran a translation of one exchange:

Q: What future, if any, do you see for your own work and for your coaching staff? Because, you know, your predecessor was eaten alive after the Olympics —

A: Well then, eat me alive right now —

Q: But we have the world championship coming up!

A: Well then, there will be a different coach because I won’t exist any more, since you will have eaten me.

Watching the game, I found myself utterly affected by Russia’s struggles. It lost in the very worst way: After leading 1-0 on an Ilya Kovalchuk laser beam — he reacted as buoyantly as I’ve ever seen — it slowly and painfully let things slip away. Finland tied it, then Selanne gave the Finns the lead, and then they scored an insurance goal that made you realize the Russians probably weren’t going to put two goals past Rask.

Sure, any team’s fans are going to be heartbroken when their guys don’t win, but there’s a sincerity and depth to how so many Russians think about hockey that this loss, in this way, was shattering.

I thought about my friends Vladimir and Pavel and Valentin out in Magnitogorsk, how they worship their hometown hero Evgeni Malkin, and how deeply this mattered to them. When I met them in November, approximately 25 percent of our conversations were about the guy; another 15 percent concerned Russia’s chances at the Olympics. Sure enough, my Facebook timeline began filling up with anguished Cyrillic. (The unreliable insta-translate feature interpreted one line as “today the operation did take place; Carry, Pasha, one castrated more than one — out head coach team game the whole team castrated …”)

I cringed for Sasha, who (as I mentioned the other day) manages the hockey-themed lobby snack bar at one media hotel and would later tell me (after insisting he did not want to talk about it) that this had been Russia’s best and even last chance for a medal. The team would never again be so stacked, he predicted, wincing in what looked like physical pain. He was still wearing his red “RUSSIA HOCKEY” T-shirt. I understood finally what it means to be, in the parlance of European football fans, “gutted.” When a Swedish journalist arm-wrestling him — don’t ask — tried to rattle him midcontest with “You’re Ovechkin!” taunts, neither Sasha nor I were amused.

Friday’s semifinals will feature two fantastic and long-lived regional matchups: USA-Canada and Sweden-Finland. It’ll be Dan Bylsma versus Sidney Crosby, Henrik Lundqvist trying to stop Teemu Selanne, and it’ll be vibrant and venomous. You can’t ask for much more.

But after all the hype about the potential for a glorious USA-or-Canada-versus-Russia showdown in the final, and considering the energy Russian fans bring to hockey games — you can feel it down to your bones — Wednesday’s result was a letdown for everyone involved. It was like driving off the road en route to one’s own wedding, leaving a church full of expectant friends and family sitting there with nothing to celebrate.