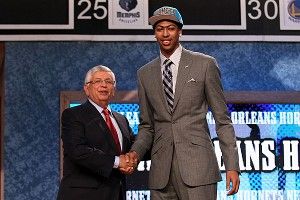 Thursday’s Supreme Court decision upholding most of President Barack Obama’s health care law coupled with the lead-up to the night’s NBA draft made for a wonderful day of social-media grazing. I spent the morning scrolling through tweets that expressed shock about the decision, batted around trade rumors, knocked news organizations for rushed and erroneous reports that the High Court had struck down the Affordable Care Act, and guessed at which teams would draft which player.

One of the striking things about seeing these topics fill up Twitter was that, by and large, they seemed to pass each other in the night (or morning or midday, depending on your time zone). Many politicos are sports fans, and the sports world is becoming increasingly politically aware, but often the sports and hard-news spheres stay separate.

These types of intersections are rare, and can make for memorable media consumption. So as Mitt Romney takes aim at Obamacare on the campaign trail, and Anthony Davis begins house shopping in New Orleans, let’s revisit a few other days when news and sports competed for the front page.

The U.S.-led invasion of Iraq was a watershed moment for the media. A decade earlier, viewers across the world were mesmerized by CNN’s in-the-moment coverage of the U.S. bombardment of Baghdad. In 2003, they watched — in near real time — as reporters embedded with troops who advanced toward the capital city. From the invasion through the fall of Baghdad in early April, news networks provided the world with wartime footage that had never been so intimate.

At the same time, the NCAA tournament kicked off before a justifiably distracted audience. Viewers who tracked both events experienced a jarring weekend of channel surfing: 13-seed Tulsa shocking Dayton … troop convoys speeding through the desert against little resistance … 12-seed Butler upsetting Mississippi State (and then Louisville in the second round) … bombed-out Iraqi army jeeps … and, of course, Drew Nicholas hitting this memorable buzzer-beater to lift Maryland over UNC-Wilmington:

The importance of the two events doesn’t really compare, of course. But flipping back and forth between them made for a profoundly dissonant viewing experience.

The O.J. Simpson murder case was a sad combination of sports and news from the start, but it didn’t directly clash until Al Cowlings drove his former teammate down the 405 Freeway in Los Angeles while the New York Knicks and Houston Rockets met in Game 5 of the 1994 NBA Finals. In this instance,
many NBC affiliates opted for split-screen coverage of the game and chase. NBC stations covering at least 10 percent of the country, including L.A., broke away from the game to offer full coverage, and the game received terrible ratings. (The pursuit even got the attention of reporters at Madison Square Garden.)

The Simpson chase, which years later would inspire a 30 for 30 documentary, led SportsCenter that night, incredible on a sports-news day that saw the Knicks win Game 5.

(On a personal note, I watched the chase but missed the Finals game because that night I was at a thoroughly forgettable Florida Marlins–New York Mets game. I caught my first glimpse of the white Bronco from within the bowels of Joe Robbie Stadium.)

Tim McCarver was in the middle of telling the country about two key plays from Game 2 of the World Series and why the Oakland Athletics were up two games to none over the cross-bay rival Giants when the picture blinked off and on, snow filled the screen, and then an ABC World Series logo appeared while McCarver and Al Michaels tried to compose themselves. A 6.9-magnitude earthquake had struck about 60 miles southeast of San Francisco in the Santa Cruz Mountains.

It was a remarkable bit of live television: For a few moments, Michaels and McCarver were as clueless about the situation as the viewers, and the shared confusion brought the country closer to the moment better than any news report could. (While the fact that it happened during the live portion of the broadcast made it more memorable, upon a fresh viewing, one wonders why the earthquake couldn’t have struck during the James Taylor–scored intro; watch the entire clip to remind yourself how weird late 1980s TV was, or skip ahead to about 4:30 for the fireworks.)

In a piece written on the 20th anniversary of the quake, which killed more than 60 people, Sports Illustrated pointed out that many more could have died on the streets had they not been at home tuning in to the game.

It’s hard to match the cultural importance and poignancy of this moment:

What did we forget? Let’s talk about it in the comments.

Craig Gaines is a copy editor at Grantland.