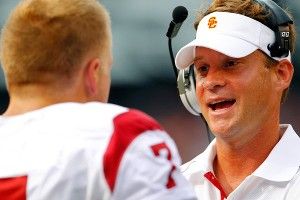 On paper, if you let your eyes blur just a little, Lane Kiffin is a genius and a boy wonder. He became the youngest head coach in NFL history with the Raiders, moved on to a plum job at Tennessee, and now heads up one of college football’s most historic programs, USC, as the youngest coach of a BCS conference team. He’s only 37, but his résumé to date implies someone with a virtuosic football brain, a maturity belying his years, and a precocious instinct for people and systems.

But in fact, the reality doesn’t match the perception. Lane Kiffin has made a fool of himself at every career stop, shown a penchant for lying and selfishness, and rarely produced on-the-field results that would seem to justify his meteoric rise. The latest example was Saturday’s 21-14 loss at Stanford, which ended USC’s national title hopes and sent them plummeting from no. 2 to no. 13 in the AP poll. Before I get into why this might be happening, let’s take a quick tour through Kiffin’s career highlights.

So why does Kiffin keep getting promoted? Why is his career trajectory so impressive when his on-the-field results haven’t caught up to his reputation, and his off-the-field antics have been downright humiliating? I have a couple theories, and the truth is probably some combination of the two.

1. Kiffin is a talented, aggressive recruiter and a decent football strategist whose spoiled-brat arrogance constantly undermines his efforts to become a great coach. He stretches rules, misreads interpersonal situations, and issues the wrong kind of challenges to his enemies. People excuse these as the follies of youth, but that’s a cop-out; they’re the follies of character, and maturity isn’t always related to age.

2. Kiffin is the beneficiary of something like The Peter Principle. To steal the Wikipedia definition, this is “a belief that in an organization where promotion is based on achievement, success, and merit, that organization’s members will eventually be promoted beyond their level of ability.” That definition isn’t precisely accurate, so let me tailor it to the world of sports — when the establishment invests enough energy, hype, and time into a personality, that personality runs a huge risk of being critically overvalued.

For an example, look at Harrison Barnes. Coming out of Ames, Iowa, his recruitment process came with an unprecedented level of publicity, and culminated with a now-infamous Skype session in which he announced that he’d be attending UNC. That kind of buildup is more common now, but it wasn’t at the time, and he set himself up as one of the most famous incoming freshmen in NCAA history. So what happened? He was named a 2010 preseason All-American, the first time that honor had ever been bestowed on a freshman. As it turned out, he didn’t live up to the honor; not even close. So how did the basketball world respond in 2011? By naming him a 2011 preseason All-American. Again, the promise didn’t even approach the reality of the disappointing season that ensued, when several key weaknesses were revealed in his game that would prevent him from ever being truly elite. So what happened? A flurry of articles came out arguing that despite a mediocre college career, Barnes would, for some reason, be a good pro. In June, he was drafted seventh by the Golden State Warriors. The myth of Barnes is alive and well, long after the promise of Barnes has died.

It’s almost like the basketball world couldn’t reconcile the publicity they’d bestowed on Barnes with the reality that he’s just not very good. To draw a political parallel, this was like the U.S. involvement in Vietnam, with the underlying idea that because so much time and money and humanity had been invested, it would be impossible to retreat from the original view. Barnes represents the athletic quagmire, in which an obvious conclusion is obscured by the smoke of our expectations.

The athletic quagmire is happening with Lane Kiffin, too. Despite his strengths as a football mind, there are character flaws that assure his failure at every step of his career. I’m not so cynical that I believe people can’t change, but I do think anybody who expects superlative, long-term success from Kiffin is deluding himself. The pattern has show no sign of diverging; what has limited him in the past will limit him in the future. And yet, despite the heaps of criticism directed at him from outside the USC bubble, Kiffin will persevere, his aura clouding the vision of those who should be looking straight at the man.