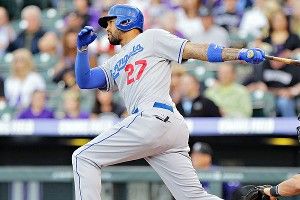 It’s a quiet Dodgers clubhouse on a Tuesday afternoon at Coors Field. A few high-numbered pitchers sit by their lockers, earbuds in, zoning out. A smattering of players gaze idly at the TV. Even by the standards of baseball-player downtime, the place is a library.

Then, the superstar lopes into the room. Makes a beeline for the sound system. His finger hovers over the play button. A second later, Drake’s “HYFR” starts blaring. “All my exes live in Texas like I’m George Strait,” spits the Degrassi alum. Our man breaks into a dance, the #BamSucka hashtag on the back of his T-shirt crumpling as he gestures around the room. Not 10 seconds later, the TV tuned to MLB Network starts a fresh highlight reel. On the screen, no. 27 is hitting tape-measure homers, followed by shiny graphics pointing to his league lead in nearly every conceivable offensive category.

Sometime between Opening Day 2011 and now, Kemp became the guy who makes you put your life on hold four times a night for fear you’ll miss something extraordinary. Scenes like this and this are almost expected, his ridiculous talent and joie de vivre constantly on display. He’s now the best baseball player on the planet. And no one’s exactly sure how or why that happened.

Let’s start with the numbers. Last year, Kemp hit .324/.399/.586, setting career highs in homers, on-base percentage, slugging average, and various roto categories. According to Baseball-Reference.com, he was worth 10 Wins Above Replacement in 2011. That’s the first time any player netted double-digit WAR in a season since Barry Bonds’s preposterous ’04 campaign.

So far this year, he’s annihilating that pace. Through 24 games, Kemp’s hitting .409/.485/.864. Those are not typos. He hit more home runs than any Cub or Padre in April. Wait, sorry, that’s a typo — he hit more home runs than all Cubs or Padres combined in April. Statistically, Kemp’s first month of the season ranks among the top eight (or top two, depending on your interpretation) of the past four decades. At that pace (or even close to that pace), Kemp would deliver the most valuable season since Babe Ruth’s 1923 masterpiece. Not quite Old Hoss Radbourn territory, but about as close as a postwar player could ever come to that impossible standard.

It seems he wasn’t supposed to be this good. At least not at first. Far from the can’t-miss pedigree of childhood idol (and first-round pick) Frank Thomas, Kemp lasted until the sixth round before the Dodgers plucked him out of Oklahoma’s Midwest City High School.

So what changed? How did we get from Matt Kemp, Pretty Good Player, to Matt Kemp, @%@$^$~%!!! To (hopefully) find some answers, we went to the source.

Matt, has your routine changed at all over the years, or at least since you started destroying the league?

I follow the same routine all the time. Doesn’t matter how good I’m doing or if I’m not doing good at the time.

There’s this whole idea you’re supposed to try to hit line drives all the time. Seems like you’re swinging for the fences a bit now, no?

Well, it’s gotta be something.

OK, now we’re getting somewhere. What specifically are you studying more closely?

Every day is different. The game plan always changes. As a hitter you have to adjust to whatever the pitcher’s doing, just like as a pitcher, if they’re hitting your inside pitch, you have to figure something else out. Just kind of … peep it out and see whatever it is they’re trying to do to you. Then you adjust.

Hmmm … well that’s something. Let’s see what his skipper has to say. Hey, Don Mattingly, what’s Kemp doing that makes him so terrific now? Something about his approach, something that’s subtle or different? And please don’t tell me he’s seeing the ball good.

All right, I had that coming. After his best comedic performance since the Sideburns Incident, Mattingly pointed to Kemp’s 2011 season, noting that his center fielder put up MVP-caliber numbers then, so it’s not like Kemp’s April outburst came completely out of nowhere. Third-base coach Tim Wallach cited Kemp’s improved feel for the strike zone. His plate-discipline numbers took a forward leap last year, and they’ve improved again in this, his fifth full season in the big leagues. Kemp sports a career-best 13.6 walk rate and lower-than-personal-average 22.3 percent strikeout rate this season. Developing a better batting eye, Wallach said, waiting for pitches to drive and laying off those you can’t, can be as simple as simply banking more at-bats.

Wallach was on to something. Go back and look at Kemp’s numbers, from his minor league days to present day, and a pattern emerges: Virtually every progression in Kemp’s game can be explained by gaining experience and banking those at-bats, dating all the way back to the day he was drafted.

As prospect maven John Sickels explained in 2008, even in high school Kemp already owned many of the tools that could make him a special baseball player. Problem was, he was better known as a star basketball player, an athlete who split his time between multiple sports and thus left some doubt as to how exactly much upside he could offer in each one.

Once he committed to baseball, his abilities started to shine through. As a 19-year-old, Kemp hit .293/.337/.504, starting the year in the South Atlantic League and ending it as one of the very few teenagers in high Single-A ball. In 2005, Kemp went back to Single-A and broke out, hitting .306/.349/.569 with 27 homers in the very pitcher-friendly Florida State League. For his efforts, Baseball America awarded him a modest no. 96 ranking among the top prospects in baseball. He went nuts the next year, hitting .346/.414/.543 as a 21-year-old in Double-A and Triple-A. But during that season, Kemp made his big league debut, his 52 games with the Dodgers just enough to burn through his rookie status and prevent him from a high prospect ranking the next year that might’ve attracted more national attention. It was happenstance, not lack of star-level ability, that made Kemp a relatively quiet commodity at the start of his major league career.

Here’s where Kemp went from there:

KEMP BY THE NUMBERS

Big batting average spike in ’07 due to an inordinately high batting average on balls in play. Other than that, this is as steady a progression for a player entering his mid-20s as you’ll ever find. The fact that Kemp was nearly a six-win player at age 24 tells you that he was actually a strong candidate to become the world beater that he is today.

Then, 2010 happened. Kemp began dating Rihanna. At the same time, his performance slumped badly. He hit a career-low .249 with a lower OBP (.310) and SLG (.450) than at any time since his rookie year. More than that, he made constant, arguably preventable mistakes. He took terrible routes to fly balls, made fatal mistakes on the base paths and generally seemed to lose track of fundamentals. Joe Torre, the Dodgers’ manager at the time, tried to discipline Kemp for his shortcomings (and for snapping at his manager). That tack failed, to the point where tensions boiled over and Kemp’s agent, Dave Stewart, implied that maybe the team should consider trading its young center fielder. The Dodgers wisely stayed further away from trading Kemp than the rumors implied, instead accepting Torre’s resignation and replacing the coaching staff at year’s end. It was a miserable time for all involved, and remains a sore spot today for an otherwise-content Kemp.

“I don’t even talk about 2010 no more, man,” he said Tuesday. “I guess you can call it growing pains. Something I learned from, a learning experience. I’ve turned the page from that. I don’t want to talk about that.”

We know what happened next. Kemp exploded in 2011, and has been even better in 2012. Check out his career numbers again, this time including the lost 2010 season and his breakout since.

You might say that 2010 season sticks out like a sore thumb, but it was really more of a diseased, gangrenous thumb. It’s a gigantic statistical outlier that may well have been caused by non-baseball factors, with variables that no projection system in the universe could’ve anticipated. There’s no reliable database of player divorces and other off-field issues and their effect on performance, but that doesn’t mean such effects don’t exist. Even Kemp’s hero Frank Thomas slogged through the worst performance of his career the year that he got divorced and his father died (though a triceps injury that caused him to miss 142 games played a much bigger role). His time with Rihanna notwithstanding, the timing of Kemp’s subsequent age-26 breakout makes perfect sense too: Bill James long posited that baseball players tend to peak in their mid-to-late 20s. The Big Hurt himself also enjoyed the best season of his superlative career at age 26.

It seems, then, that most of the confusion surrounding Kemp stems from a nasty, one-year interruption in an otherwise nearly perfect, left-side-of-bell-curve ascent. In retrospect, it would have been possible to see superstardom coming, or at least the chance of superstardom. “ZiPS always saw that there was a chance that Kemp would turn out to be an MVP candidate,” albeit a pretty small one, said ESPN writer and ZiPS projection system creator Dan Szymborski.

So maybe it all makes sense … except for one little thing: How do we explain Kemp now having a season that would challenge the best entry in the Babe Freaking Ruth catalog? Luck. Or random variance, or any other term you want to use for “shit happens.” Kemp sports a career .354 batting average on balls in play, perennially ranking among the league leaders in that category. He’s at .444 this season, some 150 points above league average, 90 points above Kemp’s own career mark, and well above even the most extreme outliers in a given season. That’s not the craziest stat on Kemp’s 2012 ledger either. For his career, Kemp has registered home runs on 17 percent of the flyballs he’s hit. Even during last season’s big breakout, he hit homers at a frequent but hardly crazy 21.4 percent rate. This season? Sixty percent. Imagine going to a baseball game and knowing that six out of every 10 balls in the air that leave the infield are going to leave the park. You’d get knocked out from whiplash by the third inning.

There is no way, no possible way, that Kemp won’t see those numbers fall back to earth. When they do, the rest of his stats will start to normalize too, even though they may well remain at or near MVP levels. As phenomenal as Alex Rodriguez and Albert Pujols have been over the course of their careers, each has had just one 10-win season. Kemp has a shot at two. In a row.

So if you want to tell the tale of Matt Kemp’s career, just boil it down to this: Good player, became a great player, lost his head for a year, then became the best player in the world. His rise didn’t come out of nowhere. We just never should’ve taken our eyes off him in the first place.