On Tuesday morning we all woke up to the news that Raymond Felton had been arrested in Manhattan around 2 a.m. the previous night. He’s facing felony gun charges after a dispute with his soon-to-be ex-wife ended with her turning him in to the NYPD, and given New York’s history of prosecution in weapons possession cases, none of this looks good for Felton. We have no idea what really happened or how it’ll end, but it’s the latest awful twist in Felton’s career, which feels like it’s been going in the wrong direction for most of the past five years.

There’s another piece to this, one that’s completely meaningless next to the legal situation in New York, but it’s a bizarre enough footnote to at least mention here. When I was still half-asleep watching Twitter process the insanity, this tweet from Russ Bengtson popped up:

As every year goes by, it's harder and harder to believe that a UNC team led by Felton, May, McCants and Marvin won a title.

I grew up loving UNC basketball, but that team’s collective fate in the pros never clicked until seeing it spelled out like that. That title team was so good and so unfair the year they won the title, and it’s all sort of unraveled since then.

Just last week, I was complaining to Chris Ryan that Raymond Felton’s whole career had turned into a complete punch line — this was the day we found out his wife’s name is Raymondo — and how depressing that was for anyone who knew how good he used to be. Not even at Carolina, but before then.

Felton’s from a 1,500-person town called Latta, South Carolina. He committed to North Carolina before his junior year in high school. From there, he turned into the best guard in the country and sort of created his own legend.

His senior year, he became the all-time leading scorer in South Carolina high school basketball history, and he had 45 points and 10 assists in the title game to help his school repeat as state champs. He beat out Carmelo Anthony for Naismith Player of the Year in 2002. When Chris Paul was choosing colleges, he ended up at Wake in part because North Carolina was slow to get involved with him, because they had Felton.`

Felton’s rise coincided with my discovering Internet and message boards early in high school, where I could nerd out about sports on a whole new (and far more pathetic) level. I read every glowing profile of him, saw most of his box scores, and imagined something like a young Isiah Thomas when he led his tiny school to huge upsets over schools like DeMatha or basketball factories like Mount Zion Academy.

I was 15 years old reading Internet message boards every day after school, and you couldn’t convince me Raymond Felton wasn’t going to the basketball Hall of Fame one day.

The stories were similar with Rashad McCants and Sean May. Not quite as steeped in myth — playing games in a town of 1,500 people will turn any superstar athlete into an urban legend — but they were All-Americans just the same.

They went to North Carolina, where they all struggled in Year 1 with Matt Doherty — May broke his foot against Iona, and the season sputtered from there — aside from one classic win over Duke at the end of the year. When it was over, Carolina went down in the NIT, Doherty was fired, and they hired Roy Williams.

That summer, 6-foot-8 Marvin Williams announced on July 4 that he was leaving Bremerton, Washington, to play for the Tar Heels. He was part of that outrageous class of high schoolers that bum-rushed the 2004 NBA draft. Of the high school players that year who actually wound up in college, Williams was the best.

Back at Carolina, Felton, May, and McCants all improved, and UNC was officially “back,” after a few miserable years under Doherty. They shaved their heads for the NCAA tournament their sophomore year … 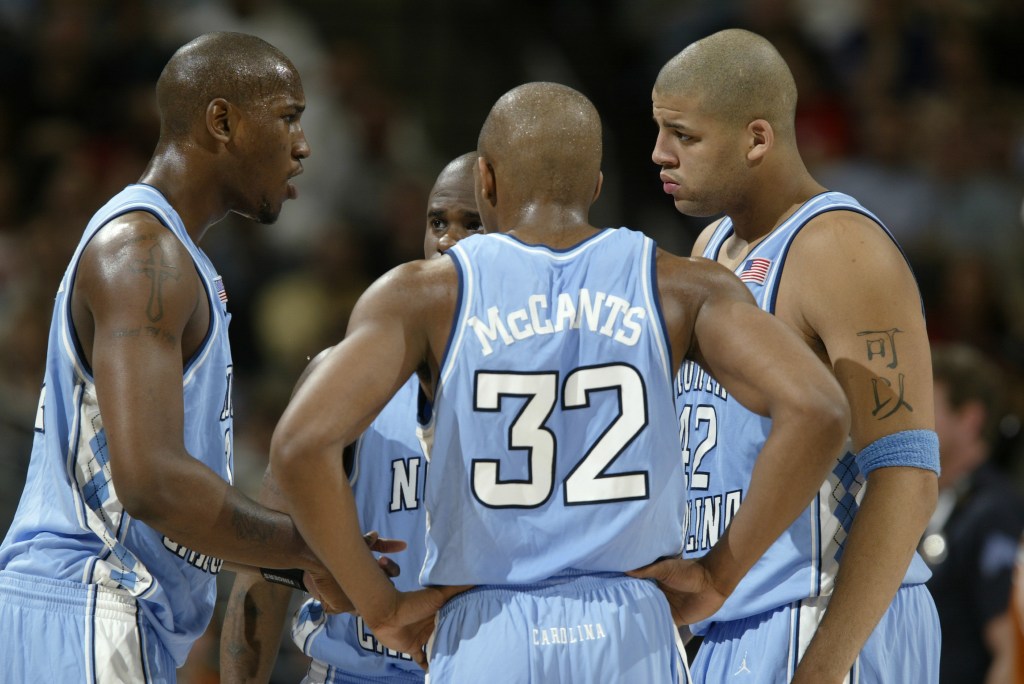 … but they were just disorganized enough to be beatable. They all came back to school, just in time for Marvin Williams to show up.

And then Sean May became the most unstoppable big man in America, Rashad McCants turned into an even deadlier shooter than J.J. Redick, Felton continued running the offense at 150 mph, and eventually it all led to this … 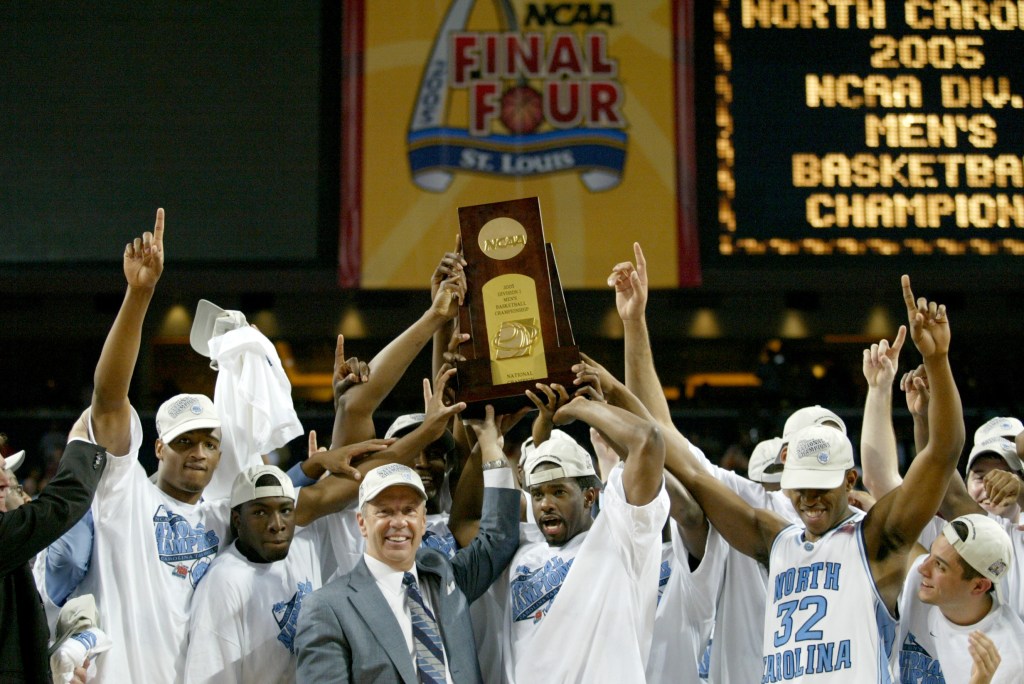 That’s where things get weird. That’s why we’re here.

Marvin Williams went no. 2 overall to the Hawks, over Chris Paul, a pick that may haunt fans in Atlanta until the end of time. Two months after that, the Hawks signed Joe Johnson to a $70 million deal, which meant they had Marvin, Josh Childress, Josh Smith, and Johnson to rotate as swingmen. With Johnson playing 35 minutes a night, that became three players splitting one spot.

For a tweener forward who couldn’t really shoot or dribble, this made it even harder to find a role that made sense. As Williams took time to adjust, fans all over Atlanta saw how perfect Chris Paul would’ve been for this team, and everyone got increasingly frustrated as the years passed and Williams’s career sputtered along.

He’s actually been more solid than people realize, but next to how good the Hawks might’ve been with Paul, you can’t help but be underwhelmed. Plus, you know, a career 10.8 points per game isn’t quite what anyone’s hoping for from the no. 2 pick. Now he’s in Utah, a role player between Gordon Hayward and Trey Burke for the tanktastic Jazz.

Sean May went 13th to the Bobcats in the NBA draft, joining Raymond Felton (who went fifth) in Charlotte. From there, everything went wrong.

He got hurt two months into his rookie year, and didn’t play again that season. The following October, he announced he’d have microfracture surgery, and he missed most of that season, too. For a big man who’d had weight issues his entire career, 18 months away from basketball worked out about as well as you’d expect. This is how we got headlines like “Sacramento Kings Pay Sean May $100K to Exercise.”

He came back out of shape, got traded to the Kings, and never really got back on track. Eventually, he floated over to professional hoops in France, where he finally found his comfort zone next to another star from the 2005 team, Jawad Williams.

For me, the highlight of Sean May’s NBA career was probably when @Aykis16 and SB Nation spoofed ESPN’s LeBron free agency watch.

No matter what happens in this life, we will always have Maydar. 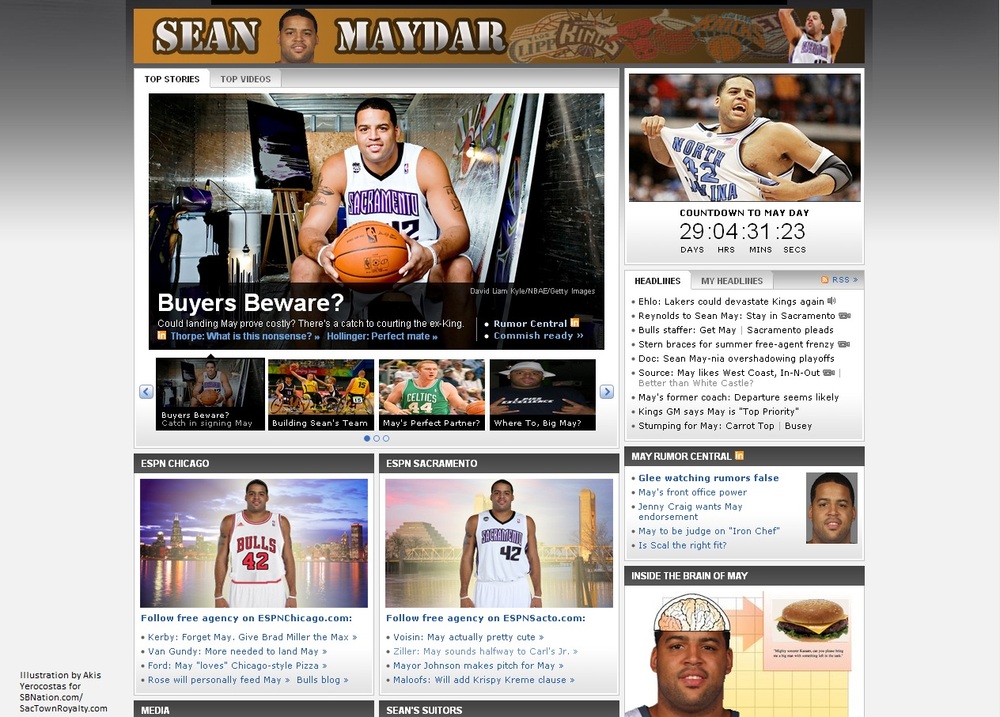 Well … he went 14th overall to the Timberwolves. After a quiet rookie year, he had microfracture surgery, too. That sabotaged most of his second year. By Year 4, he was gone from Minny, traded to the Kings. Somewhere during all this he also dated Khloe Kardashian?

As he described it last year, “I was just the guy to pop the cherry. I’m just happy I just didn’t eat the fruit as these guys did.”

That’s the funniest part of a generally bitter interview where McCants vents about the NBA career he never had. He actually makes some solid points. Possibly because of some critical comments about playing in the NCAA that would read a lot differently in 2014 than they did in 2004, he was deemed “uncoachable” at every step of his career.

Maybe he was uncoachable. But the only time he played more than 20 minutes a game in the NBA, he averaged 15 points a night. With 30 teams in the NBA, it’s kind of amazing it couldn’t work for him anywhere.

Anyway … according to Wikipedia, the definitive source for all international basketball journeymen, since leaving the NBA he’s played in the D-League, he spent two games in the Philippines, he played in China, and he’s currently playing in Brazil.

He’s also tried acting, as a cross-dressing thief addicted to the high of shoplifting, costarring with Traci Lords, giving us one of the single greatest trailers the Internet’s ever seen.

And he’s rapping, too. Get some King Suni Blac in your life.

He’s probably had the most successful career of anyone on the 2005 team, and if he’d been surrounded by shooters early in his career, he could’ve been a lot more successful. But that never happened in Charlotte, and after ending up in Portland a few years ago and showing up wayyyyyy out of shape, he’s sort of become the NBA version of Khalid El-Amin.

No matter how solid he’s been over the years, he’s a punch line for fat jokes everywhere he goes. (In fairness, there’s nothing better than a fat point guard. The jokes make sense.)

He’s been up and down in New York since James Dolan more or less chose him over Jeremy Lin, and between the fat jokes and clanked jumpers, this really makes him the perfect symbol for everything the Knicks do wrong under Dolan. That was before the ex-wife named Raymondo, and the gun charges, and … who even knows what comes next at this point?

For now, we’ll probably remember his NBA career for the Photoshops of cheeseburgers. And whatever’s happening here, too.

It’s just bizarre. These are guys I worshipped as a 15-year-old, and I watched them win everything at 18 years old. A few months later, UNC set an NBA record as the first school ever to produce four lottery picks in the same year.

Now it’s almost 10 years later, and Raymond Felton’s facing time in prison. As the whole situation got weirder and weirder Tuesday, I couldn’t help thinking back. There are a few separate conclusions here.

1. All the legends of high school Felton just underscore how ridiculous the NBA is in general. It’s a league full of guys who were the best players their high schools had ever seen, and even the ones who spend years pissing off fans and floating all over the NBA are better than we can possibly imagine.

2. None of the Carolina guys are blameless for how things have worked out — especially not Felton, because owning a gun New York City is just stupid — but had they ended up somewhere else, in stable situations that made more sense, this could’ve been a totally different story. Maybe they wouldn’t be superstars, but each of these guys could’ve had successful 10- or 15-year careers.

In a league full of players with equally baffling gifts and pedigrees, there’s so much luck involved in who succeeds and who ends up playing professional basketball in Brazil. Hard work matters too, and treating people right, and talent. But still. So do staying healthy and playing for the right team. We forget luck when we celebrate the success of the greatest players, and it’s just as easy to forget it when things go wrong and careers takes people in strange, crappy directions.

3. Or maybe that’s just what I’m telling myself this week. Rashad McCants was always a lot to handle at UNC, Felton could never get a consistent jumper, Sean May had injuries and weight problems even when he was in school, and Marvin Williams never actually had one skill that could dominate anyone. There were warning signs all along.

But screw it. Even though I’m 10 years older now and know all that, I’ll forever be convinced it could’ve worked for them if things had gone a little differently. No matter how mature I get or how much perspective I have, favorite teams and favorite players will turn me into an irrational teenager until the end of time.

Oh, and speaking of irrational teenagers … J.R. Smith was committed to play at Carolina with that 2005 team before he went pro. The crazy stories of the 2005 Tar Heels could’ve been SO MUCH CRAZIER.

This article has been updated to remove an erroneous reference to Michael Jordan drafting Sean May and Raymond Felton.