It’s really easy to talk about Luis Suarez. There’s so much to talk about, in fact, that his actual play on the field seems almost incidental. But with Suarez returning from suspension and making his first start of the Premier League season last weekend against Sunderland, it’s thankfully time to focus on his on-field contributions. And for better or worse, Suarez’s contributions remain vital to Liverpool’s performance.

In his first game back Suarez pulled off a feat that Liverpool hadn’t managed in the entirety of their first five games. He extended the team’s lead, and he did it twice. It was a dream return, and it highlights exactly what Suarez brings to the table, and why despite all his faults both on and off the field, Liverpool still rely heavily on the controversial Uruguayan forward.

Quietly, despite their strong start, Liverpool were, in some very specific ways, a broken team this season before Suarez’s return. The fact that they scored early goals against Stoke, Aston Villa, and Manchester United in their first three games and rode those goals to narrow victories obscured a serious problem for Liverpool. They had real difficulties creating chances. Those difficulties caught up with Brendan Rodgers’s team over their last three Suarez-less games, when they scored two goals total, with both of those being thanks to glaring errors by former Liverpool and current Swansea midfielder Jonjo Shelvey.

Last season Liverpool took more shots than any other team in the league, shooting 739 times (as always, the numbers are courtesy of ESPN Stats & Info, except where otherwise noted). They shot the ball from all over the field, and while they piled up a ton of goals in front of the net, they also took shots from tough angles and long distances. Grantland’s Kirk Goldsberry provides a visualization of these shots below. The statistics behind these visualizations come courtesy of Opta. 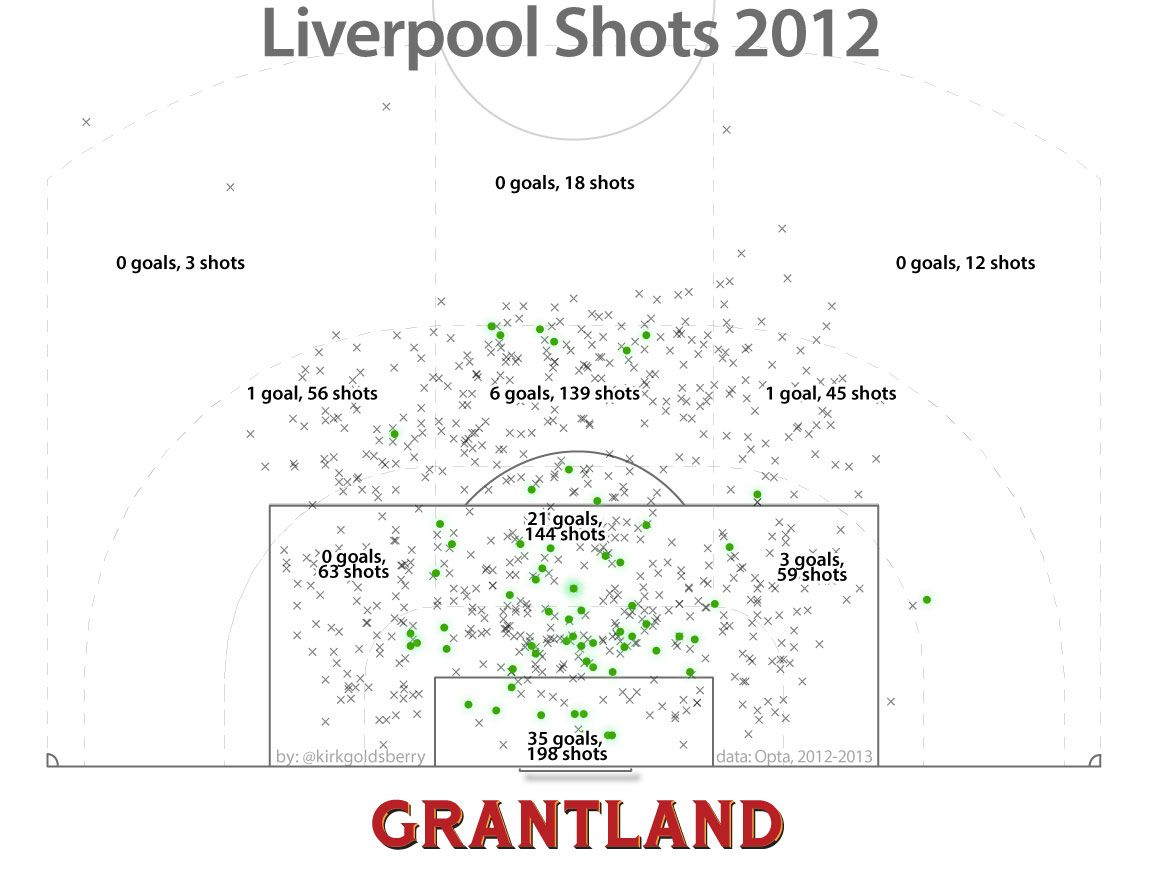 There are two things Suarez does incredibly well: he shoots, and he creates chances for his teammates to shoot. Suarez shot the ball 5.3 times per 90 minutes in 2012, more than anybody else in the Premier League by more than half a shot. He was also unquestionably the most charitable player on Liverpool, averaging 2.6 chances created per 90 minutes, tying him for seventh in the league (of players who played more than 1,000 minutes).

However, filter out set pieces and you have a truer idea of his value. From open play, only David Silva’s 2.8 chances created per 90 minutes top Suarez’s 2.4. 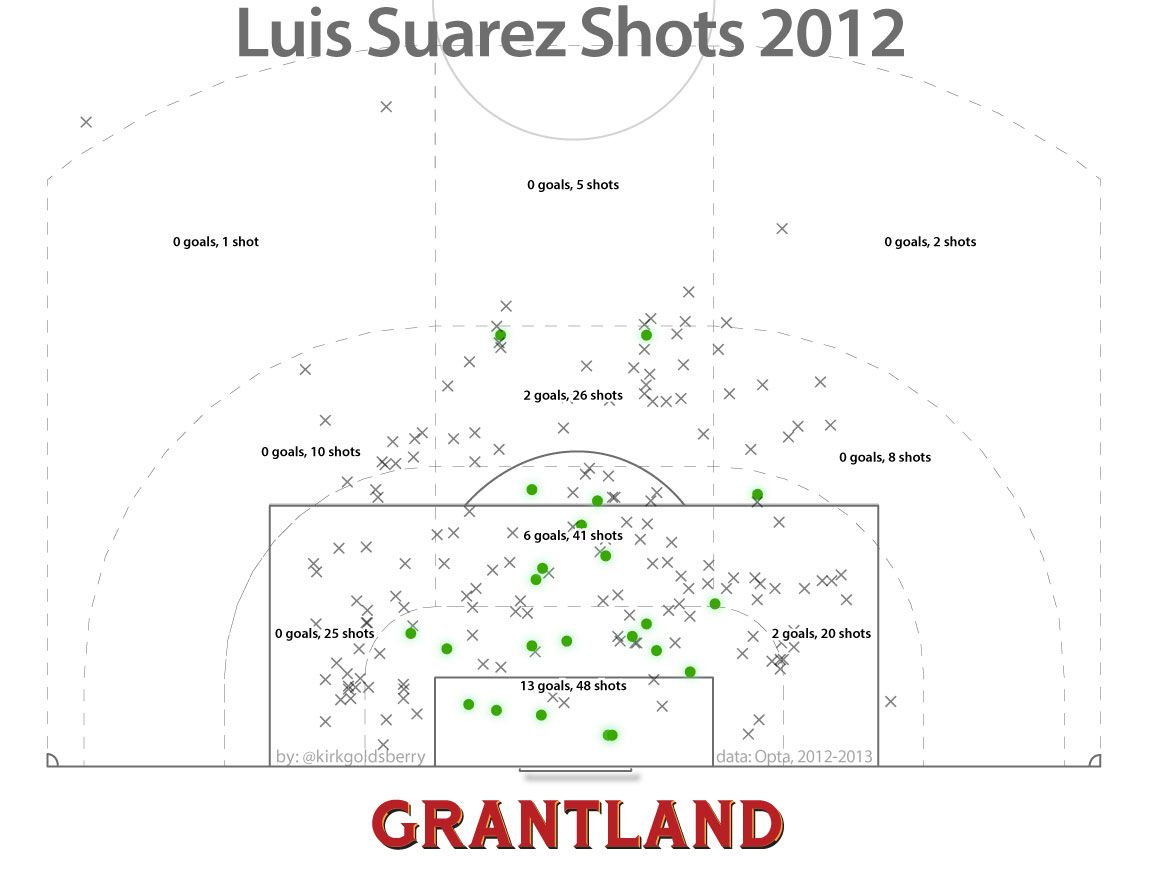 This season, before Suarez returned from his ban, Liverpool were on track for just a hair under 479 shots. That’s a staggering slowdown in pace, and it points to another trend, one that amplified Suarez’s absence. Liverpool spent a staggering amount of game time ahead of their opponent, a condition that would, for most teams, naturally lead to them shooting less. But last season, Liverpool were the most prolific team in the league at shooting when they were ahead by a goal. The conventional wisdom is that teams with the lead will turn their attention to defense, first protecting their goal and then counterattacking. Liverpool didn’t need to sacrifice their attack to increase their defensive effectiveness. In fact, as teams became more desperate to score, Liverpool thrived at creating numerous counterattacking chances, simply through Suarez’s presence on the pitch.

According to Ben Pugsley, Liverpool shot the ball every 2:35 they were defending a one-goal lead last season, by far the best in the league. Without Suarez this year, they simply didn’t generate anywhere near that pace of attack. In the 236 minutes they defended a one-goal lead over their first five games, they only managed 26 shots, or one every 9:05.

In the 33 games Suarez played for Liverpool last season, the team took 170 shots while ahead. Suarez took 52 of them, a figure good enough for second-most shots in the league while his team was winning, tied with Gareth Bale and behind only Robin van Persie. (Van Persie, of course, had the advantage of playing for a United team that spent last season winning an average of more than 43 minutes per game, compared to Liverpool’s just under 29, again thanks to Pugsley’s tremendous work on game states.)

Suarez also was a strong chance creator when his team was ahead, tied for seventh in the league with 24 chances created from open play. In total, he was involved in 78 chances while Liverpool led their opponents during the 2012 season. It’s pretty hard to lose 46 percent of your shots and just roll on like nothing’s happened.

A lot gets made of Suarez’s shooting habits, and rightly so. He has no conscience and a particular fondness for shooting from brutally bad angles (a skill he is actually below-average at, at least according to this breakdown from Paul Riley), but those skills, which can be a detriment in some circumstances, are actually key to Liverpool’s style of defending a lead.

The September 21 loss against Southampton drove the point home. Southampton have one of the most effective pressing defenses in the league, and basically played the game as if they were down a goal, pressuring Liverpool up the field and daring them to counterattack. Liverpool couldn’t do so, mustering only 10 shots the entire game. Saints manager Mauricio Pochettino had provided a blueprint for other teams to beat the Reds.

The return of Suarez stopped that from happening, and it was readily apparent as Liverpool faced Sunderland.

Suarez’s first goal developed very simply. It was a beautiful transitional ball from Steven Gerrard to Daniel Sturridge, who had drifted wide, followed by a drive toward the net and a slick cross to Suarez crashing the back post for a tap-in. But that run from Suarez simply wasn’t happening over the first five games. Sturridge was frequently left without anybody to play a final ball to, as Suarez’s main replacement, Iago Aspas, lacked the instinctive off-ball positioning that is a large part of any natural forward’s game.

Suarez’s second goal is an even better example of how important he is on the counterattack. The highlight picks the play up at 3:02, as Suarez turns and releases Sturridge with a beautiful cross-field launch. Remarkably, Suarez then manages to get in position to finish the play as well, again closing in hard to the back post. Those two goals were both made by Sturridge having a player behind him capable of making the good attacking runs of a secondary forward.

Now that Suarez is back in the fold, Liverpool should be fairly similar to the team they were in the second half of last year, after they brought in Sturridge and the playmaker Coutinho to support him. That team can be a very good team. Sturridge takes some of the scoring load off Suarez, and Coutinho takes some of the playmaking responsibility away, but as it stands they will remain complementary players to the Uruguayan.

It’s not unreasonable to think that the team as constituted could challenge for a European spot, and maybe even a Champions League one if things broke right. But, at the same time, approaching this season that way seems to neglect the long-term health of the club. Suarez has made it clear he wants to leave (and while he may be opening talks on a contract negotiation, as his actions last offseason showed, long-term contracts are not exactly indicative of long-term commitments), and even while he remains, his unpredictability is a weekly challenge. Perhaps it would have been wiser for Liverpool and Rodgers to take this opportunity to begin paving the way for their young stars to take the reins, especially as it’s not even a foregone conclusion that Liverpool’s current setup is stronger than one where Suarez is slightly more marginalized.

Regardless, the next stretch of the season sets up remarkably well for Suarez. He’ll be welcomed into the fold and immediately gets to fill the Suarez-size hole that Rodgers left waiting for him. It will likely be a triumphant return for Suarez. That just may not be the best thing for his team.