I don’t know about you, but I often find fantasy football to be an endless well of disappointment. Injuries, surprise benchings, and Mike Shanahan tend to make this impossible to avoid. Metaphorically speaking, I sometimes feel like I’m just trying to throw the ball away and live for another down. Then my pass gets intercepted and I sob uncontrollably.

With that in mind, we might as well embrace the disappointment. What doesn’t kill us only makes us stronger, right? It’s about time we held fantasy football’s most heinous underperformers accountable, and grouping them into one easy list of shame is a start. Ladies and gentlemen, I present the All-Disappointment Team. Please try to contain your tears.

Kaepernick faces some pretty stiff competition at the QB spot, as RG3, Tom Brady, Russell Wilson, and Cam Newton have all disappointed their fantasy owners. Nevertheless, Kaepernick walked away with the title because (a) he has scored a mere 76 fantasy points through six games (19th among all quarterbacks), and (b) his best excuse — Michael Crabtree’s injury — is less compelling than everyone else’s. Meanwhile, Ray Rice has looked just plain ordinary, which is coincidentally what Jim Brown called Trent Richardson, who’s not exactly waking up the echoes of Edgerrin James in high-octane Indy.

Donald Brown being better than Trent Richardson is so awkward.

One of my friends traded a king’s ransom for Julio Jones a week before Jones’s season-ending injury, and I didn’t even feel secretly giddy inside. I felt only pity. Fellow Falcon Roddy White has been frustrating as well, and would clearly be better served ending his prodigious consecutive-games-played streak and letting his ankle heal. And while Gronk is the obvious choice for most disappointing tight end, at least he offers the potential to score fantasy points at some point, which is more than we can say about Sudfeld, who had the hype machine on full blast in August. Now he’s been marooned to the Jets’ fantasy wasteland, embodying the worst kind of disappointment there is: hopelessness.

• The Only Thing That’s ‘Tight’ Is My Heart:

Let’s say you visited your local psychic for lineup help last week, because divination is undoubtedly the next frontier in fantasy advice. As a concerned Gronk owner, you needed a little soothsaying to quell your uncertainty about Robbie, and you rejoiced when the Seer assured you Gronk would match Jimmy Graham in Week 6 fantasy points. After all, the seemingly unguardable Graham had averaged 18.6 points per game going into Sunday’s contest with the Patriots, and Gronk finally appeared ready to make his season debut. A tight end pointsplosion was surely on the horizon.

On Friday, Adam Schefter reported that there was “less optimism” that Gronk would play, but you remained positive. “Less optimism” meant that some optimism remained, and according to your most trusted fortuneteller, Gronk was guaranteed to score the same amount of points as Graham, who wouldn’t dare post a goose egg. However, the ominous tweets kept coming, and Gronk was ultimately ruled out. ProFootballTalk says that Gronk’s absence will likely be “one more game, at most,” but I’ll believe it when I see it. Fool me once …

Worse, Graham suffered an ankle injury and was clearly hobbled. While Chris Mortensen senses optimism that Graham will return following this week’s bye, it’s worth remembering that Graham missed time last year due to a similar issue. Moreover, the Saints’ future opponents will almost certainly follow the precedent set by the Patriots: double- and triple-team the hell out of Graham, and pray that Marques Colston and Kenny Stills don’t get open for huge gains. I’m not saying you should SELL SELL SELL your Graham stock, because that would be batshit crazy, but the days of easy 20-point performances may be over.

In brighter tight end news, Detroit’s Joseph Fauria has emerged as the most efficient pass-catcher in NFL history, and no, I’m not referring to his staggering five touchdowns on just nine targets. I’m talking about his admirable attempt at parlaying being Matthew Stafford’s seventh-favorite receiver into the token football-player spot on Dancing With the Stars.

Fauria is a prodigy. He probably taught himself how to dougie. But can he bop his way to the top of the fantasy leaderboard? I doubt it, at least for now. Too few targets; too much Brandon Pettigrew and Tony Scheffler. However, with his 6-foot-7, 255-pound frame, Fauria’s upside is sky-scrapingly high. If his targets ever increase, pounce on him like a … lion.

• You Should Probably Drop Your RB1 for This Defense:

The Kansas City D/ST scored 27 points on Sunday, but it probably deserved 50. 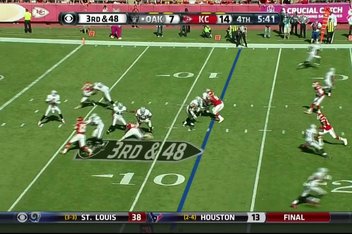 THIRD-AND-48! How is forcing the opponent into that situation not worth 23 bonus fantasy points?

Still, those 27 points were the unit’s most of the season, raising its per-game average to 19. The Chiefs have tallied 10 interceptions, seven fumble recoveries, and most impressively, five touchdowns, which is more than Demaryius Thomas, A.J. Green, Calvin Johnson, LeSean McCoy, Matt Forte, and a number of other really skilled offensive players have. As a point of comparison, the second-place Seahawks D/ST (by far the top defense drafted in 2013) is scoring 12.5 points per game, truly terrific stuff that looks like dog shit next to Kansas City’s singular greatness.

Of course, we should’ve seen this coming the moment Andy Reid was hired. If there was one overriding thought I had while watching his final two seasons in Philly, it was Now THAT man can coach defense!

• This Might Be Our Only Chance to Troll Peyton Manning:

Pause for a moment and consider the Week 6 fantasy QB leaderboard. Really inspect it, like you would any priceless gem or potentially moldy loaf of bread. What stands out to you?

Here’s what I notice:

• Cam Newton’s 30 points tops the list, not surprising given his über-efficient passing performance and rushing touchdown to boot. Expect this to be a recurring theme going forward, especially with a tasty matchup against the Rams looming in Week 7.

• Nick Foles (!) earns runner-up honors, which is just dandy if you were among the 1.2 percent of ESPN.com owners who started him. More on Mr. Foles later.

• Despite a vile QBR of 16.2, Thad Lewis managed 21 fantasy points, good for fifth among all quarterbacks. Thad Lewis!

• Sam Bradford tossed three touchdowns for the second consecutive week, which is all the evidence anyone needs to suggest the Rapture is fast approaching.

• Even Brandon Weeden scored a respectable 16 points, and he threw the worst pass of all time.

Here’s what I don’t notice:

• Peyton Manning. Dude gets a softball — nay, kickball! — matchup with the Jaguars and notches his worst fantasy performance of the year by a mile, with 13 points. Hell, Bradford scored 20 points versus the Jags. The exceedingly average Alex Smith posted 16 points in Jacksonville, and it’s not out of the realm of possibility that Matt Schaub/T.J. Yates will exceed 13 points when they face the Jags in Week 12. Consistency is a vital trait for top-flight fantasy quarterbacks, and I’m starting to question whether Peyton has what it takes to be one.

Just when you thought Bill Belichick had settled on a grisly three-way split between Stevan Ridley, LeGarrette Blount, and Brandon Bolden, this stat line happens.

First of all, Tom Brady out-rushing Blount will never not be funny. Second of all, as Christopher Harris notes, “Ridley didn’t even get his first touch until the very end of the first quarter.” Blount and Bolden saw the bulk of their action at the beginning of the game and were their usual mediocre selves, paving the way for Ridley’s heavy workload. Though Ridley was facing Football Outsiders’ no. 32 run defense, he still deserves plaudits for his 22-point day after scoring a total of 16 points in his previous four games. Of course, Ridley’s future remains murky, which is the surest sign that he’s still just a flex. Feel free to make Ridley your RB2 if you have no better options, but understand that Sunday’s performance was an outlier.

1. WR Keenan Allen, San Diego Chargers (available in 93.2 percent of ESPN.com leagues): I will continue to pound the table for Allen as long as he remains widely available, for I have never endorsed a more noble cause. Julio Jones owners who didn’t add Allen last week must feel overwhelming regret, because after Monday night’s nine receptions for 107 yards and a touchdown, Allen will be among the most sought-after free agents this week. He’s San Diego’s most talented wideout, and he’s quickly becoming Philip Rivers’s favorite.

2. RB Brandon Jacobs, New York Giants (97.9 percent): Well, I certainly didn’t see 22 CARRIES, 106 YARDS, AND TWO TOUCHDOWNS coming. I mean, it’s not 2008. While stat lines like this will be few and far between for Jacobs, starting running backs are always worth owning, and Jacobs should be one for at least a few more weeks. Don’t worry about him missing practice yesterday — that was only “precautionary,” and his hamstring issue is reportedly minor.

3. RB Joseph Randle, Dallas Cowboys (98.6 percent): It was only a matter of time: DeMarco Murray sustained a sprained MCL on Sunday and may not play this week in Philadelphia. With backup Lance Dunbar also sidelined, Randle figures to start and merits a claim if you need running back help. (Virtually everyone needs running back help.) He wasn’t particularly impressive against the Redskins, gaining 17 yards on 11 carries, but to reiterate, starting running backs are always worth owning. Write that down until it seeps into the deepest chambers of your psyche.

4. QB Nick Foles, Philadelphia Eagles (97.4 percent): If you own Michael Vick, you’d be wise to add Foles, like, yesterday. Last week, Chip Kelly said it would take an “unbelievable show” for Foles to become the permanent starter, and that’s basically what he delivered. In the MRSA-infected environs of Raymond James Stadium, Foles was accurate and decisive, and even managed to make Riley Cooper a viable receiver. Additionally, if you own an underperforming quarterback — say, Colin Kaepernick, RG3, or Tom Brady — and have the luxury of an open roster spot, it can’t hurt to claim Foles for security.