There are two “fun facts” about Wichita State University. For one, the original Pizza Hut is in the middle of the campus, a small undertaking by two students who churned out personal pizzas to WSU students in the late ’50s. The other tidbit is about a man named Paul Wight, who played for the Shockers basketball team in the early ’90s. A 7-foot, 300-pound hulk who trailed a few steps behind on every fast break, Wight didn’t have a future in basketball. Post-college, he turned those trailing steps into thunderous stomps in the WCW. Today, in the WWE, they call him The Big Show. And he’ll be one of the headliners at WrestleMania this Sunday.

All the Grantland coverage of the 2015 NCAA tournament, right here.
When I moved to Wichita, in 1991, Wight was playing for a program that was nationally irrelevant. In the mid-’80s, WSU basketball had made a few trips to the tournament and even churned out a handful of NBA players — guys like Xavier McDaniel, Antoine Carr, and Cliff Levingston. (Another was a man named Cheese Johnson, who was nicknamed “Cheese” because his first name, Lynbert, sort of, but not really, sounded like “Limburger.”) My family got season tickets soon after arriving, and Shockers basketball became my childhood team. Later in life, I found myself jealous of those who grew up in cities with NBA stars. Kids from Chicago went to see Michael Jordan. Kids in New York went to watch Patrick Ewing. I grew up in Wichita and went to see K.C. Hunt, Kamau Alexander, and The Big Show.

The Henry Levitt Arena, known as “the Roundhouse,” was decently sized for a small-town college basketball school. It was rarely full back then, except for one game every other year: when KU would bless Wichita State with a game and celebrate the sellout by beating the living shit out of us on our home court. The one-for-one games switched off between the Roundhouse and the Fieldhouse from 1986 to 1992. The scores were as follows:

The series ended in 1993, when Roy Williams said he wouldn’t continue it without a better home-for-home deal. Wichita State coach Scott Thompson, while exhaling, thought, Yeah, that was a pretty good call, Roy.

Mark Turgeon was the Jayhawks’ point guard in 1987, the only year the Shockers managed to win over that stretch. He turned to coaching after his KU career, and in 2000, he returned to Wichita as the Shockers’ head coach. After nearly a decade of early losses in the Missouri Valley Conference tournament and life as an early-season opponent for real basketball schools, Turgeon returned the Shockers to respectability. After just two winning seasons in the past 11 years, Wichita State became a regular presence in the postseason before finally winning the MVC tournament in 2006.

Wichita State fans and boosters knew that as a promising young coach, Turgeon would eventually leave for greener pastures, which he did after the 2007 season, taking the job at Texas A&M. Still, we were thankful for what he’d contributed to the program. He made Wichita State basketball matter again.

Gregg Marshall had done the same at Winthrop, putting the Eagles on the basketball map with seven Big South Conference titles, and, as a result, seven NCAA tournament appearances. Following the same path that many successful small-conference coaches have, Marshall was hired as Turgeon’s replacement.

Gregg Marshall is a ball-breaker on and off the court, with an old-school coaching air and a constant demand for the best out of his players. They didn’t come to play in Wichita. They came to play for him. He doesn’t cater to boosters because he knows that at Wichita State, he doesn’t have to. There isn’t much else to do in Wichita, sportswise, which allows Marshall to do it his way. If you don’t like it, then feel free to watch the Wichita Thunder, the AA hockey team and the only other show in town. Wichita State is Marshall’s program now. Actually, let me rephrase that: Marshall is Wichita State’s program now. He taught his players to “play angry,” and they have. The program and its fans developed a distinct personality. The “Play Angry” motto was taken to such an extreme that they would physically change the face of the mascot to look less joyous and more pissed-off — a pissed-off shock of wheat.

It took six seasons for Marshall’s version of the Shockers to get to the Final Four, as a 9-seed in 2013. They lost to eventual champion Louisville, but with most of the group coming back, it was obvious that the run was more than a Cinderella story. The next season, Wichita State didn’t lose a single game. It became the first team in the history of college basketball to go 35-0 and got a no. 1 seed as reward.

The headlines nationwide were about Wichita State basketball. For once, college basketball in Kansas was about more than Kansas basketball. Then the rumblings began.

I started attending the University of Kansas in 1999, but you don’t need to be a KU alumnus to get what Kansas basketball means. The feeling around Kansas basketball at KU isn’t outward cockiness, but confidence that comes from knowing the program is a mainstay. In a way, it’s similar to the attitude of the head coach. Bill Self has a smug confidence — smugfidence! — that permeates the city of Lawrence and much of the rest of the state. 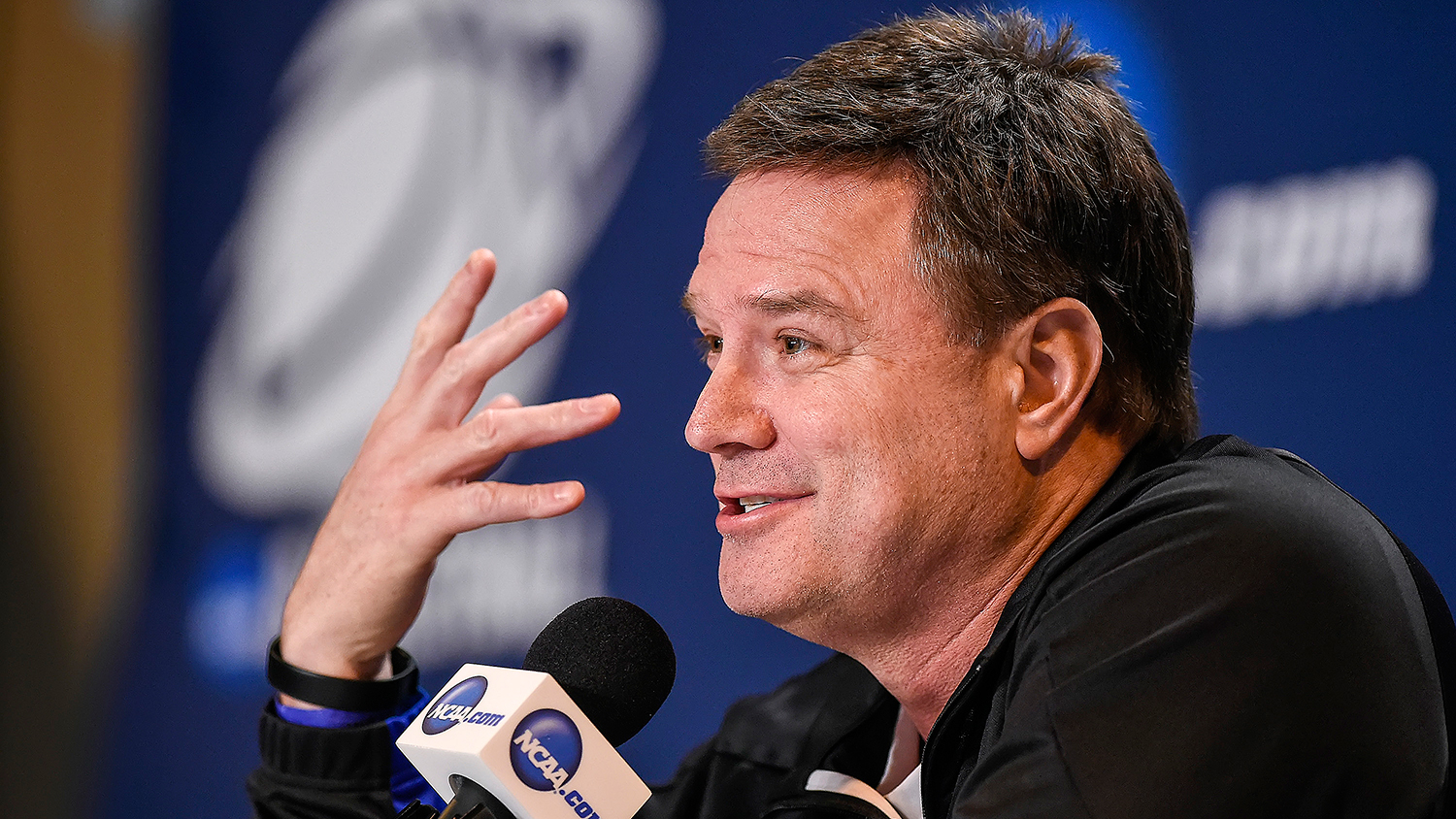 With every Wichita State win in the last several years, the utterings of “We should play KU” grew from under-the-breath whispers to wouldn’t-it-be-interesting mentions, to full-on shouts in the Wichita Eagle and Kansas City Star. KU was there to note each such proclamation with a wink and a smile. When asked about the idea in 2013, Self told the Star, “This isn’t knocking Wichita State, but if it was best for our program I would reach out about scheduling them. But it’s not.”

Marshall responded by saying he wouldn’t play KU just to cash a check, as Wichita State did in the Big Show days. If they should meet in the tournament, so be it. Otherwise, he’d go about his business in Wichita, and Self could go about his in Lawrence.

The apparent enmity was enough for a “holy shit” moment, for every KU and WSU fan, when the NCAA seeding put the two teams within one game of playing each other for the first time in 22 years. Whether the organization admits it or not, the NCAA knows the story here, and built a story line into the very first weekend of games.

After last Friday’s New Mexico State win, Bill Self was asked if he’d thought about playing Wichita State this weekend. He cracked a smugfident smile, said he had not, and then deferred the question to KU point guard Frank Mason, who also said he had not “… but will now.”

This past Sunday, the polite nodding was over. The story was Big Brother versus Little Brother. Only now, Little Brother was having a growth spurt. Wichita State wanted KU to acknowledge how good the Shockers were, and KU wanted the Shockers to go back to playing with kids their own age. State bragging rights were up for grabs. (Yes, they both know you’re there, too, K-State, but it’s not football season, so pipe down and go yell about Bill Snyder’s immortality somewhere else.)

Anyone who knows the history — all of those people crammed into bars around the state with KU shirts and Wichita State hats — had to think that even as the programs had grown closer, a Shockers win would mean scraping by a longtime powerhouse. Instead, Sunday’s second half looked like the ending from A League of Their Own — Lori Petty plowing over Geena Davis at home plate, the frustration of a lifetime as second banana powering her every step.

For Kansas, the loss was another — albeit less — disappointing end to the tournament. Again, the Jayhawks will clean their hands and look to maintain a core group that will enter next season as a top-10 team, even if it’s one without Cliff Alexander and Kelly Oubre Jr. Self will reload and recruit the best high school players in the country, because that is what Kansas does.

For Wichita State, the win is a huge one not just for this current team, but also for the school and its history. It’s the last hurdle. It’s a win that punctuates the Marshall era and proves that the Shockers are no longer an early-season, laughed-about, warm-up school on a schedule. They’re now the game that sells out opponents’ home courts when they come to town. 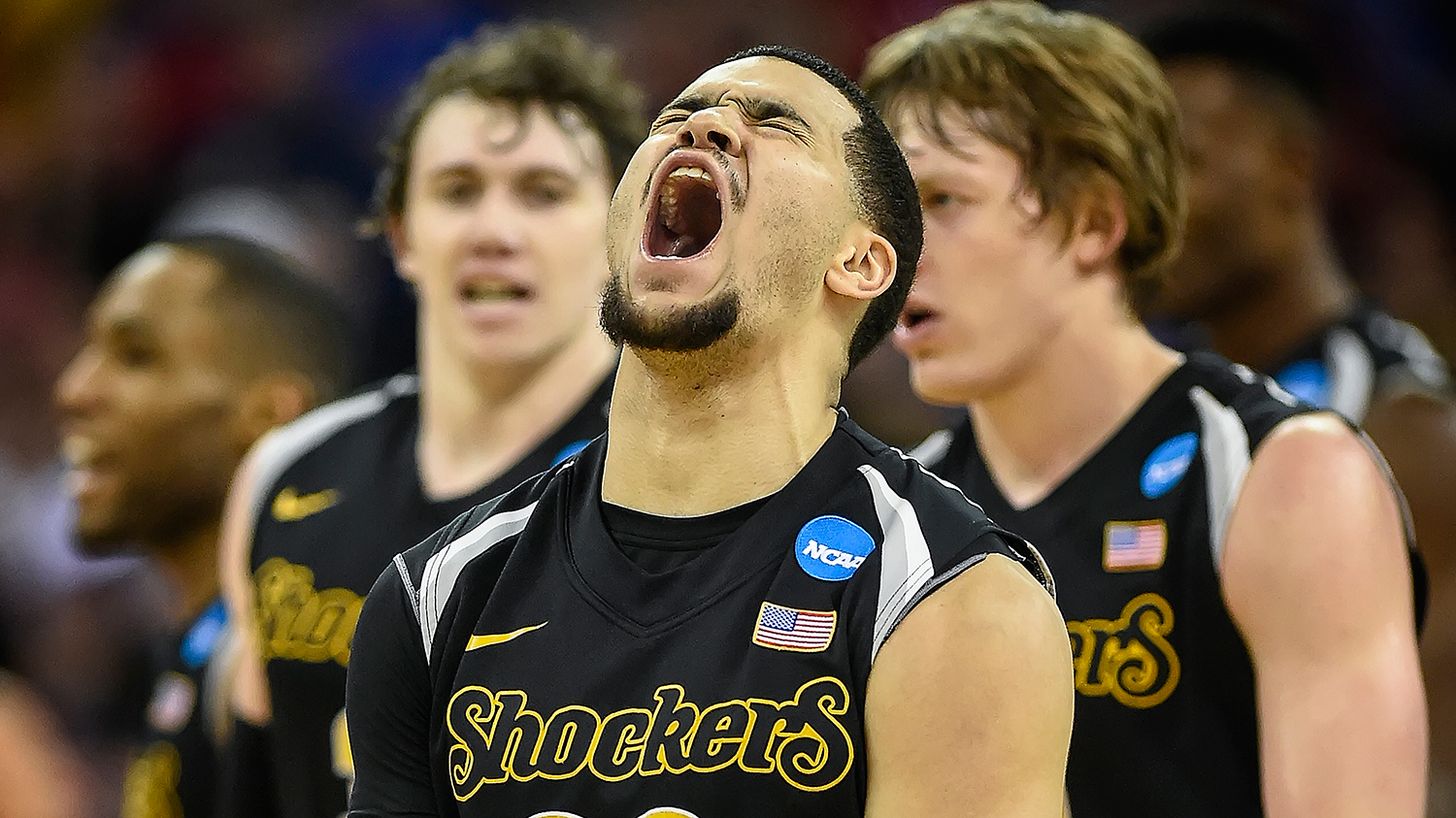 There are only three rest stops on the 163-mile stretch of I-35 between Wichita and Lawrence, and anyone who’s taken the drive has probably stopped at the one in Matfield Green — a haven of fuel, cigarettes, and porcelain-bound relief. Other than the gas station, the only reason to slow down in Matfield Green is a small stone memorial in a field off the highway. It’s a tribute to Notre Dame legend Knute Rockne, who was on a plane that crashed in nearby Bazaar, Kansas, in 1931, killing him and seven others.

Wichita State plays Notre Dame on Thursday night, for the right to head to the Elite Eight, where the winner will likely meet a Kentucky team driven to make its own history. Kentucky stands at 36-0. Last season the Shockers boasted a record of 35-0 until the Wildcats ended their unbeaten streak in the third round of the tournament.

There’s a chance that a repeat of last season means not only the end of this one, but also of more at Wichita State. Marshall has admitted that the right offer could entice him to go elsewhere, and there’s always the chance he could move on to a bigger school and begin the third phase in his college basketball coaching career — turning a power-conference “football school” into one that’s also pretty good at basketball.

That won’t change what Marshall has done these past eight years. He’s turned a small program into its own brand of basketball. Wichita State University, as a result, is officially no longer just the school with the first Pizza Hut and The Big Show. The only big show to talk about at Wichita State is Shockers basketball.