It’s now been more than 30 years since the University of Virginia last made a Final Four run. Led by Ralph Sampson, the Cavaliers made the national semifinals in 1981, and then they returned in 1984, a year after their star center had turned pro. Right about the same time, Dick Bennett was braving the cold winters in northern Wisconsin and turning a Division III program at the University of Wisconsin–Stevens Point into a national powerhouse. At the root of his teams’ success was the defensive scheme Bennett refers to as “the pack line.”

Three decades later, Dick’s son, Tony, has brought the pack line to Charlottesville, and his undefeated Cavaliers look poised to end the program’s Final Four drought. Virginia is ranked second in both the AP and USA Today polls, behind only a Kentucky team that dominates the nation’s spotlight. It’s a little bit ironic that these two schools — the only remaining unbeatens — sit side-by-side in the rankings, as they couldn’t have less in common. The Wildcats boast an embarrassing collection of talent, with former McDonald’s All Americans and future NBA lottery picks dotting their roster left and right. The Cavaliers, while certainly not bereft of skilled personnel, don’t have nearly the starpower.

Since Tony took over the floundering program in 2009, the Cavaliers have grown into a nationally respected defensive powerhouse. After taking a couple of seasons to instill his principles, Tony’s teams have sported a top-six defense in three of the past four years, per Kenpom.com’s Adjusted Defensive Efficiency metric.1 This year it ranks third, trailing only Kentucky and San Diego State. And it’s all thanks to the pack line.

The year Virginia finished outside the top six, it was still 24th. 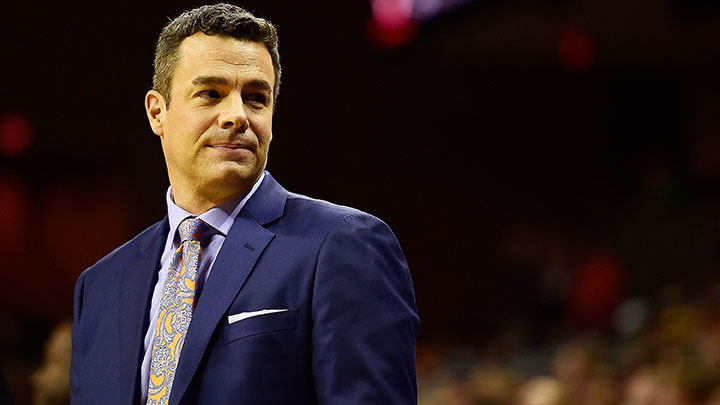 When it comes to man-to-man defense, most teams fall under one of two overarching classifications: “deny” team or “gap” team. A “deny” team expands its defense to play in the passing lanes, attempting to limit ball movement and force turnovers with intense pressure.2 A “gap” defense does the exact opposite. Instead of expanding out, it stays condensed, clogging potential driving lanes with help defenders and attempting to create a force field around the paint. The pack line — created by Dick and refined by Tony — is the archetypal “gap” defense.

The system’s name comes from an actual line taped on the floor during practice to show players how far to defend. Here’s Dick describing the line at a coaching clinic in Milwaukee years ago:

Although we often associate great defense with moments of individual brilliance — a feisty defender locking up an opposing ball handler until he forces up a tough shot — the real hallmark of a great defense is how well it recovers when breached at the point of attack. “Deny” teams put themselves at greater risk, because once their initial pressure is beaten, help defenders face long, rushed recoveries since the structure of the defense is already stretched so thin. Offenses that can break this pressure will feast on easy hoops.

Dick cultivated his pack-line principles to eliminate these chaotic (and often nonexistent) help situations by having help in place before it’s needed. The line the Bennetts use to teach their system is both literal and metaphorical — no player is to stray from the pack at the expense of the collective unit.

“It’s more of a team system,” Tony says. “You have to rely on people being in the help position, in the gaps.”

What’s most unique about the system is that the pack line forces players to influence ball handlers toward the middle of the floor, which is typically considered to be the most vulnerable part of a defense. But with the pack line, the middle is where the help is. Here’s Dick explaining his reasoning at that same Milwaukee clinic:

Everything that Tony’s Virginia team does defensively stems from this concept of middle help, including its pick-and-roll defense. While it’s become more popular to “down,” forcing pick-and-roll ball handlers toward the sideline or baseline, Tony’s teams, per the system’s rules, still allow them to head toward the middle of the floor. Doing otherwise would compromise the integrity of the defense, even if strategies like “downing” screens on the ball may be more effective in a vacuum.

“What you do has to fit. So many NBA teams, they ‘ice’ or they ‘down’ the side ball screen — college teams, too — but they do that because they play to the sideline and have their help all down there,” Tony says. “But the way you play the post should match how you play on the perimeter. Your footwork, your positioning, it all has to fit together, and it sets you up to be more successful.”

Because of this systemwide cohesion, teams that play Virginia essentially run into a mirage-like force field designed to both invite and then shield the ball from the paint. Just ask Harvard, which could muster only 27 points (yes, in a full game) against the Cavaliers in late December. When executed to perfection, Tony’s scheme produces lots of possessions that look like this:

The Virginia coach is quick to point out that the pack line isn’t some magical system concocted while watching his father conduct experiments in their secret basketball laboratory: “We’re not doing anything earth-shattering,” he says. Tony also notes that he isn’t pulling some Norman Dale–type routine and withholding basketballs from practices in order to drill defense like a crazed martinet. He estimates that he splits defensive and offensive work about 55/45 during regular practices.

“There’s more of a balance than people think,” he says. “I learned from my time in the NBA — and watching the game in general — that you need to be good on both ends of the floor.”

And with that offense3 approaching its already tremendous defense, this Virginia team has been unstoppable. If that equilibrium continues, chances are we’ll be saying the same thing come early April.