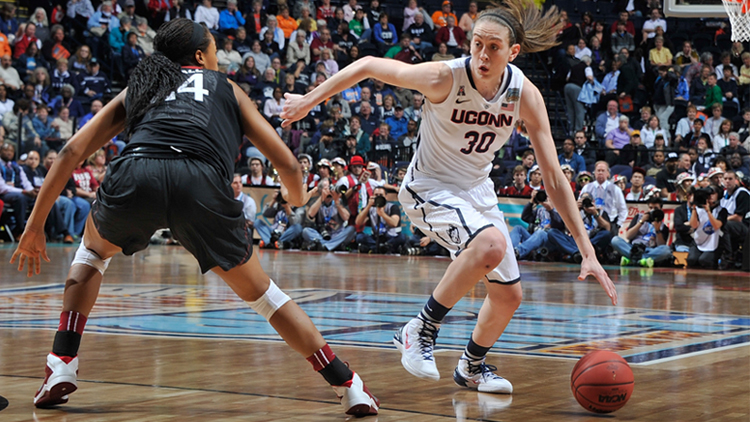 The men’s NCAA tournament is over, and the Hungry Huskies have been crowned the champions of the 2014 tournament. But that doesn’t mean college basketball has reached an end. Tonight in Nashville, the Connecticut women’s basketball team plays Notre Dame for the title at 8:30 p.m. ET on ESPN. If you need your fix of college hoops today and you haven’t been following the women’s game, here are 10 things you need to know about the national championship:

1. Both teams are unbeaten — the Huskies are 39-0 and the Irish are 37-0. This is the first time in tournament history (both men’s and women’s) that two teams with perfect records are playing for the championship.

2. Connecticut is going for its second consecutive championship and ninth overall. The Huskies ousted Notre Dame last year in the Final Four, beating the Irish 83-65 and snapping their record 30-game win streak. Notre Dame is going for the school’s second championship.

4. This game will be a tough battle: While Connecticut is known for its stingy defense and Notre Dame is praised for its cutting offense, neither team has deep flaws on either end of the court.

6. Look out for the coaching. Geno Auriemma and Muffet McGraw are among the best coaches in women’s hoops right now, and they had a few blunt and not-so-nice things to say:

McGraw: “We don’t have a relationship. … I think there was always some mutual respect when we first started, and I’d like to think that is still there on our part.

Auriemma: “Sometimes we act like girls, like we’re supposed to go to dinner every night. We’re supposed to play each other, try to beat each other’s brains in, try to win a national championship and compete like hell, and then Muffet and Geno are supposed to get together afterwards and go have a bottle of wine? That’s just not going to happen. So, stop asking us why it doesn’t happen.”

7. The Huskies are returning four starters, including AP and USBWA National Player of the Year and Naismith winner Breanna Stewart, who leads the team with 19.4 points per game and boasts a 7-foot-1 wingspan. Read Emma Carmichael here for more on the “first Durantesque player in the women’s game.”

9. Fun tidbit: All of the Notre Dame players and female coaches wear green nail polish throughout the tournament, a tradition that started during the 1997 tournament.

10. X factor: Notre Dame’s Achonwa tore her ACL in the team’s Elite Eight matchup against Baylor and will be absent tonight. The Irish did manage to beat and outrebound Maryland, but this will be a bit tougher against Connecticut’s shot blockers, who rank top in the nation.