For most of 2014, the Oakland A’s were the best team in baseball by leaps and bounds, leading the league’s toughest division by six games at one point and sporting the best run differential in baseball. From atop their perch, they pushed in all their chips, acquired Jeff Samardzija and Jon Lester — and immediately went in the tank. In just a little more than three months, the A’s lost 16 games in the standings to the Angels and tumbled all the way down into a one-game playoff with the Kansas City Royals, who hadn’t made the playoffs since 1985.

Through seven innings, though, the A’s led 7-3, and all looked like it would be well. Lester was cruising, while Kansas City’s two best starters, James Shields and Yordano Ventura, got their teeth kicked in. Oakland would live through its second-half swoon, and the young Royals and the rabid Kauffman Stadium crowd would at least have something to aspire to in 2015.

Four hours and 45 minutes later, the game had turned into Alpengeist. 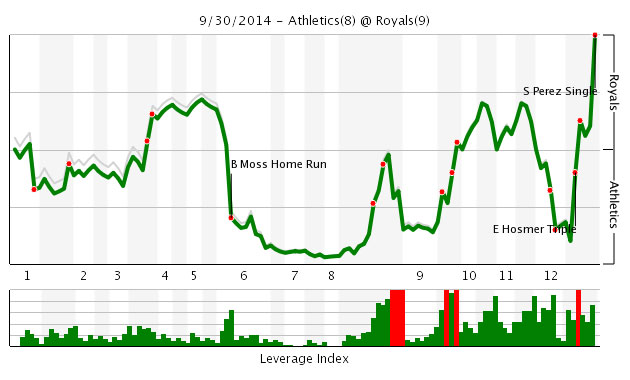 A’s manager Bob Melvin left Lester in about an inning too long, and the Royals turned the eighth inning into a pastiche of the … I don’t have a comparison, because even the 1905 Giants had a couple of power hitters. The totals: three hits, three runs, and three stolen bases.

All of our critics’ best-of lists, the Year in Holy S#!t sports moments, and our series on What We Saw in 2014.
Despite the damage done off Lester and Luke Gregerson, the Royals entered the ninth still down by one — and with only three chances to score off Sean Doolittle, a former college first baseman who’d reinvented himself as a hirsute, fastball-happy relief ace. Imagine a left-handed Mariano Rivera who labored under the impression that the only reason you didn’t like Neutral Milk Hotel was that he just hadn’t given you the hard sell yet. In other words: Nobody scores off Sean Doolittle, particularly not the bottom of the order of a team that hadn’t won a playoff game in Doolittle’s lifetime.

Pinch hitter Josh Willingham led off with only the third two-strike base hit that Doolittle had allowed all year and was immediately replaced by pinch runner Jarrod Dyson. A sacrifice bunt, a stolen base, and a sacrifice fly let Dyson score to tie the game at seven.

Brandon Finnegan took over the next inning for Kansas City. Three months earlier, Finnegan was the starting pitcher in a 15-inning playoff game between TCU and Virginia in the College World Series. By the end of September, he’d turned into a 5-foot-11 fist-pumping bullpen hellbeast, and he pitched two scoreless innings before his leadoff walk to Josh Reddick in the 12th led to an 8-7 Oakland lead.

The bottom of the 12th started with a groundout, which made the A’s 9-to-1 favorites to win. Here’s how the rest of the inning went: Triple, single. Tie game. Holy shit. Pitching change. Pop out. Pitching change. Stolen base. Grounder down the third-base line that eluded a diving Josh Donaldson by less than a foot. Four and a half hours after the first pitch, the Royals win the game, then seven more in a row, and would have won the World Series if not for Madison Bumgarner. The Oakland A’s let Lester walk as a free agent, then traded Samardzija and Donaldson. If you’d gone back in time to June to tell people about this, they’d find the story about 80 percent as unbelievable as the fact that you’d managed to travel back in time six months. With baseball, improbability tends to compound itself.