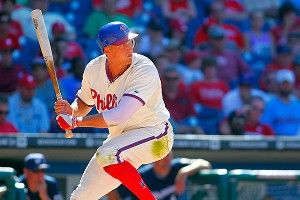 It’s a baseball and Batman podcast, now with extra controversy. Jonah Keri and SB Nation’s Rob Neyer unpack the baseball trade deadline, tackling some of the biggest moves and non-moves of the past 48 hours. How much help did the Dodgers and Giants really get in Shane Victorino and Hunter Pence? Are we sleeping on a really good Braves team? Are the Nationals vulnerable? Are the Reds the best team in the National League? In the battle of Rangers vs. Angels, who will prevail? Grantland’s Andy Greenwald then stops by for some much-needed Phillies nostalgia. With Victorino and Pence gone, how’s die-hard Phils fan Andy feeling about the team’s new era? And how should we remember the Phillies’ dominance of 2007-11?

Then, the gloves come off: The Dark Knight vs. The Dark Knight Rises … who ya got? We nerd our way through both flicks, deride the Harvey Dent plotline, weigh in on Maggie Gyllenhaal as a source of undying love, praise loud explosions, and finally render a verdict on TDK vs. TDKR and, more broadly, on how we watch movies.